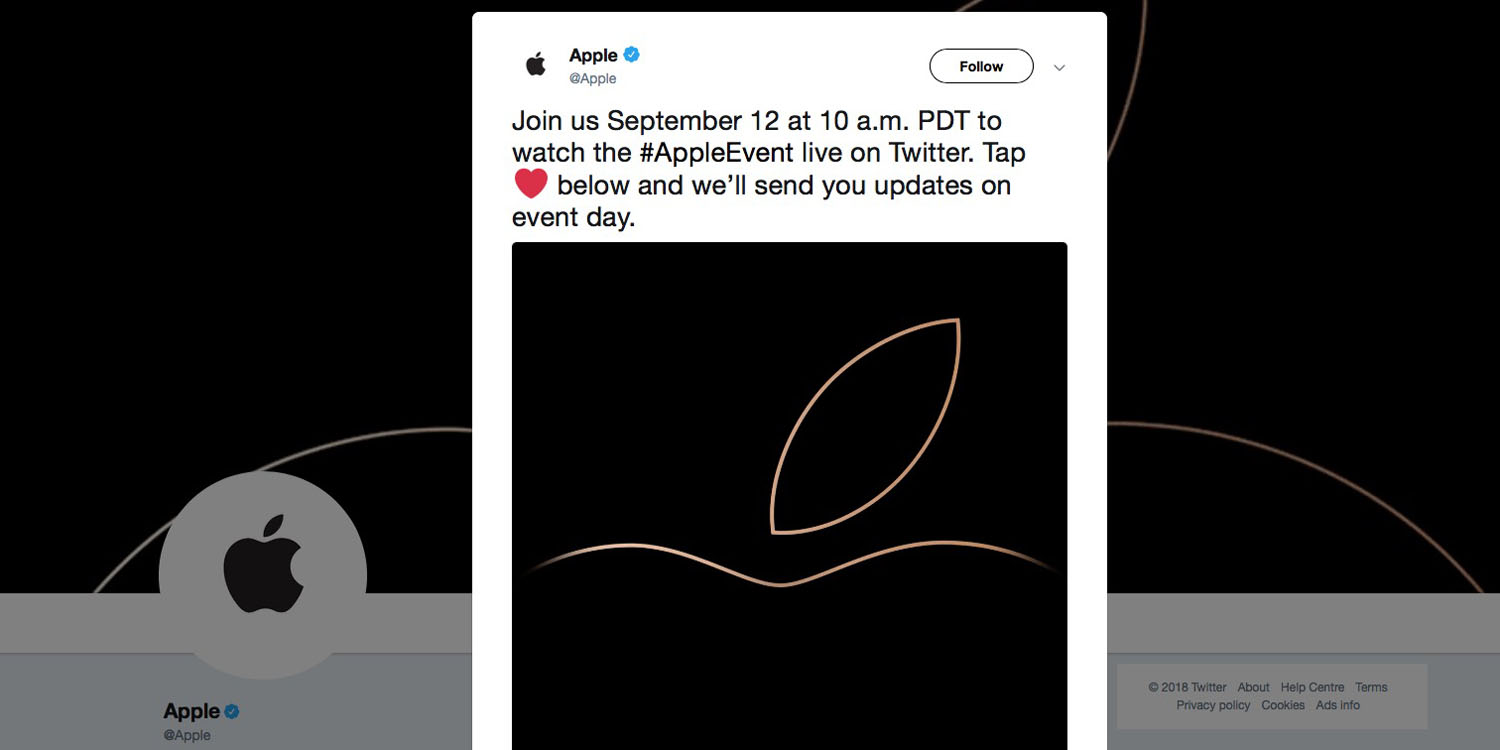 We imagine most 9to5Mac readers will be watching tomorrow’s iPhone launch live from the Apple Events app on Apple TV or from Safari, but it looks like Apple may be planning to stream its event on an additional platform this year as well…

Join us September 12 at 10 a.m. PDT to watch the #AppleEvent live on Twitter. Tap ❤️ below and we’ll send you updates on event day.

The tweet is accompanied by an animated GIF of the top of the Apple logo, in gold, and specifically mentions being able to “watch the #AppleEvent live on Twitter.”

When you accept the invitation, Apple sends an automated reply similar to previous years.

Thank you. We’ll send a reminder before the #AppleEvent on September 12. Reply #stop to opt out.

Apple first issued the viewing invitation yesterday morning as part of its ad campaign for the new iPhones and Apple Watches. Apple’s official @Apple account is required for managing ads like these, but the account doesn’t actually tweet like Apple’s other accounts for the App Store, Apple Music, and other services.

Twitter has livestreamed sporting events on its official apps including its Apple TV app, but we haven’t seen an Apple event streamed on Twitter before.

We’re expecting to see the iPhone Xs – the direct replacement for the iPhone X – together with a larger 6.5-inch Xs Max or Xs Plus model, and a cheaper 6.1-inch LCD version. Speculation on the name for that has included the iPhone Xc and iPhone Xr.

We’ll also see a new Apple Watch, likely called the Series 4, with a 15% larger display and at least one new watch face. Also expected is an AirPods refresh with a wireless charging case, and we’d hope that AirPower will finally go on sale.

Less likely are new Macs and iPads. While it’s possible Apple could include the expected new models in tomorrow’s event, it seems more likely that it has enough to cover to make this a separate event in October.

We’ll of course be bringing you live coverage of the event.