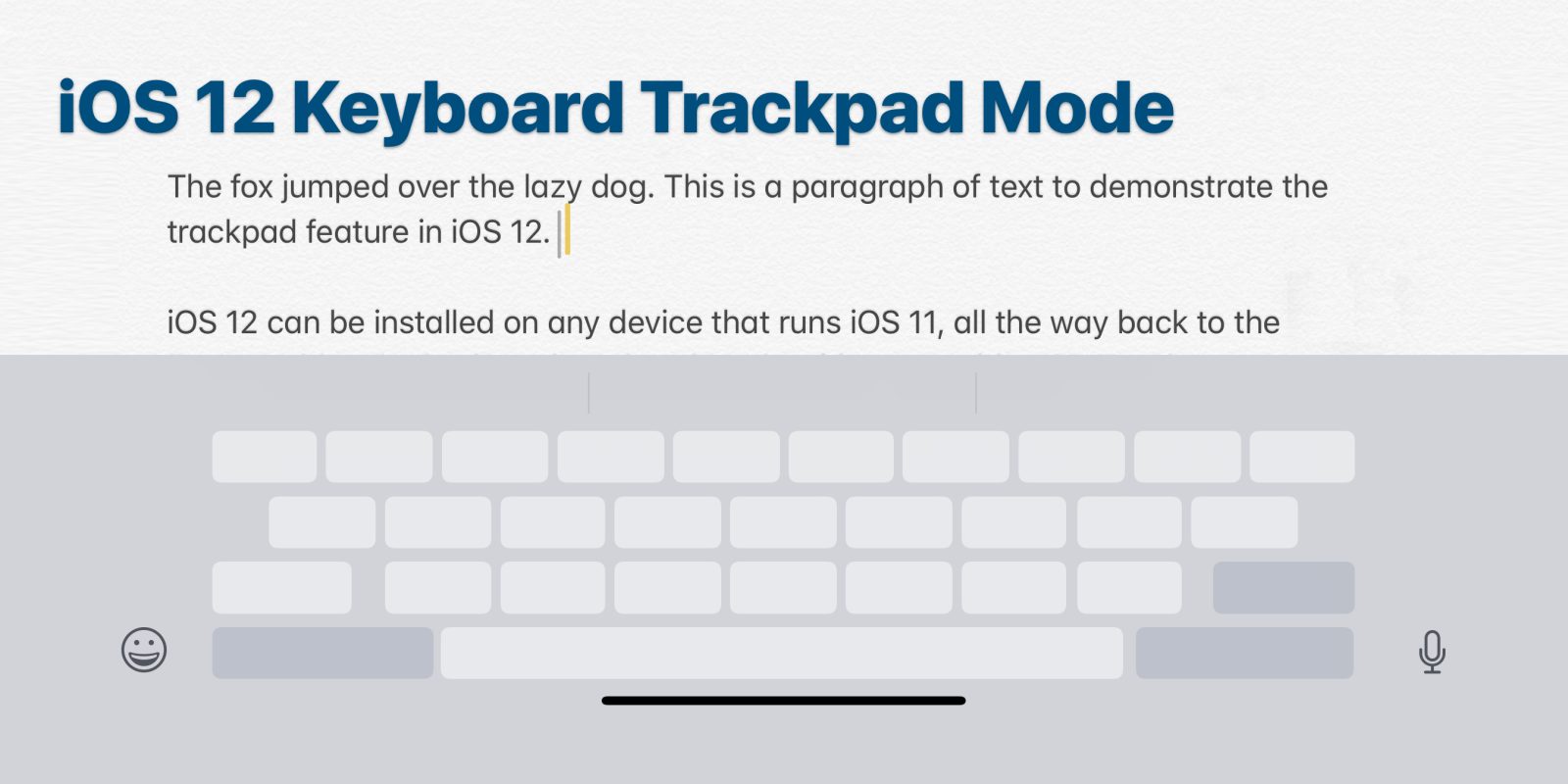 One of the best parts of 3D Touch is the ability to turn the iPhone keyboard into a trackpad that you can use to move the blinking blue text input cursor. With iOS 12, Apple has brought this feature to all iPhone and iPad models with a new gesture, removing the 3D Touch requirement.

To activate keyboard trackpad mode without 3D Touch on iOS 12, simply long-press on the space bar with one finger. After a short delay, the keys will fade away to indicate that you have entered trackpad mode.

In trackpad mode, your finger directly controls the placement of the text cursor. This makes it easier to precisely delete or insert characters into the current text field.

To use trackpad mode, you need to be using the Apple stock keyboard. Tap on a text view, so that the keyboard is visible. Then, long-press on the space bar. A moment later, the letters on the keys will disappear — this means that you are now using the trackpad feature. Simply drag your finger over the deactivated keys. Rather than typing text, you are now directly moving the cursor position. When the trackpad is where you want it, simply release your finger and the cursor will stay there.

(In the past, iPad users have been able to enter trackpad mode by placing two fingers on the keyboard. The two-finger gesture still works in iOS 12, in addition to the new version.)

iOS 12 makes this feature available to all iPhone, iPad and iPod touch devices, regardless of screen capability. This was surely done in part for the new iPhone XR, which lacks 3D Touch. However, Apple has rolled out the feature to everyone, so the entire iOS user base can benefit. Note that iOS 12 runs on every device that runs iOS 11, all the way back to the iPhone 5s. 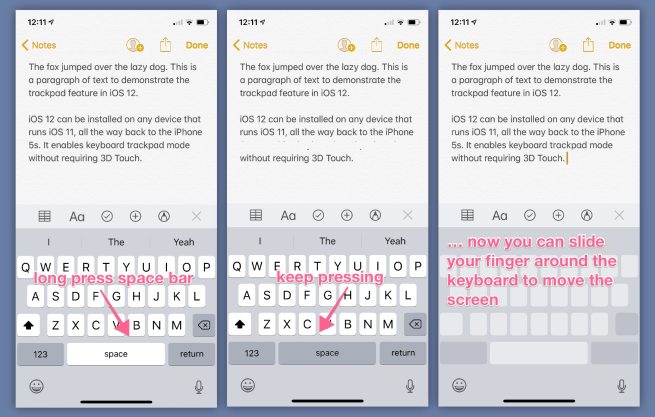 If you are using a device with 3D Touch (iPhone 6s, iPhone 7, iPhone 8, iPhone X, iPhone Xs), you can do slightly more than simply move the cursor position. For a start, you don’t have to wait for the long press gesture to be recognized. You can directly apply force to the screen where the keyboard sits and it will instantly switch to trackpad mode.

Moreover, whilst in trackpad mode activated by 3D Touch, you can apply more force to begin a selection at the current cursor position. This means you can adjust the placement of the cursor, and select an entire sentence or paragraph, without releasing your finger. It’s a really nice power user feature for the devices that support it.

That’s a nice touch for 3D Touch capable devices, but the core functionality of moving the cursor is available to everyone. This trend of unlocking features that were previously only accessible with 3D Touch continues in other parts of the operating system too.

For example, the Clear All Notifications button on the lock screen used to require force on iPhones; older iPhones were unable to use it. Now, you can simply long press on the circular ‘X’ button in Notification Center on any device, to remove all alerts from the lock screen.

There are some rumors flying around that Apple intends to ditch 3D Touch entirely in its 2019 iPhone lineup. The iPhone XR is one such example of a new iPhone that lacks a pressure sensitive screen. It remains to be seen if Apple will remove it from the entire iPhone line in future, and what technology will replace it.

Regardless of motivation, Apple’s actions means that customers with older iPhones can enjoy some new features they previously couldn’t access before.