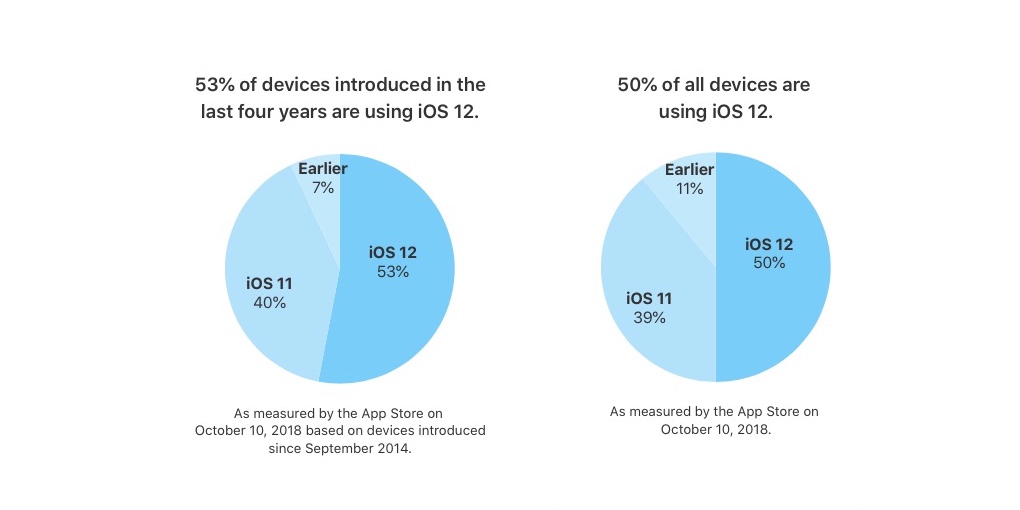 Mixpanel reported that Apple had crossed the magic 50% milestone for iOS 12 at the weekend, and now Apple has released its first usage numbers which are based off visits to the App Store.

Apple says 50% of all devices are running iOS 12, and 53% of devices introduced within the last four years. This four-year time span metric is new, and it means that it only counts devices launched since September 2014 (iPhone 6 and later).

As of October 10, 7% of devices introduced in the last four years were running iOS 10 or earlier. Apple’s all-time chart shows 11% are in that category. This 4% gap is essentially an estimate of how many Apple iOS devices are still in use that cannot upgrade beyond iOS 10 — devices like the iPhone 5c and iPhone 5.

The first few days of iOS 12 adoption were more sluggish than the same period for iOS 11. However, iOS 12 is now rocketing ahead. Whilst iOS 12 is already above 50% as of October 10, it took iOS 11 until November 8 to reach the same milestone — as counted by Apple’s statistics.

It’s interesting that Apple has started tracking the 4 year timeframe variant of the metrics, this is the first time Apple has reported figures like that. The September 2014 cutoff point is the earliest timeframe when all iPhones released at the time would be able to run iOS 12, that is, the iPhone 6 and iPhone 6 Plus. If Apple had stretched to five years, the iPhone 5s would be applicable for iOS 12 but the iPhone 5c cannot be updated to iOS 11 or iOS 12 and would drag down the figures a bit. That may explain why Apple chose to focus on the last four years.

Customer reception to iOS 12 has been very positive, with seemingly very few major bugs, thanks to a renewed focus on performance and stability on Apple’s part.

iOS 12 upgrade rates will no doubt get another boost when iOS 12.1 launches later this year with the long-awaited Group FaceTime call features, as well as 70 new emoji.