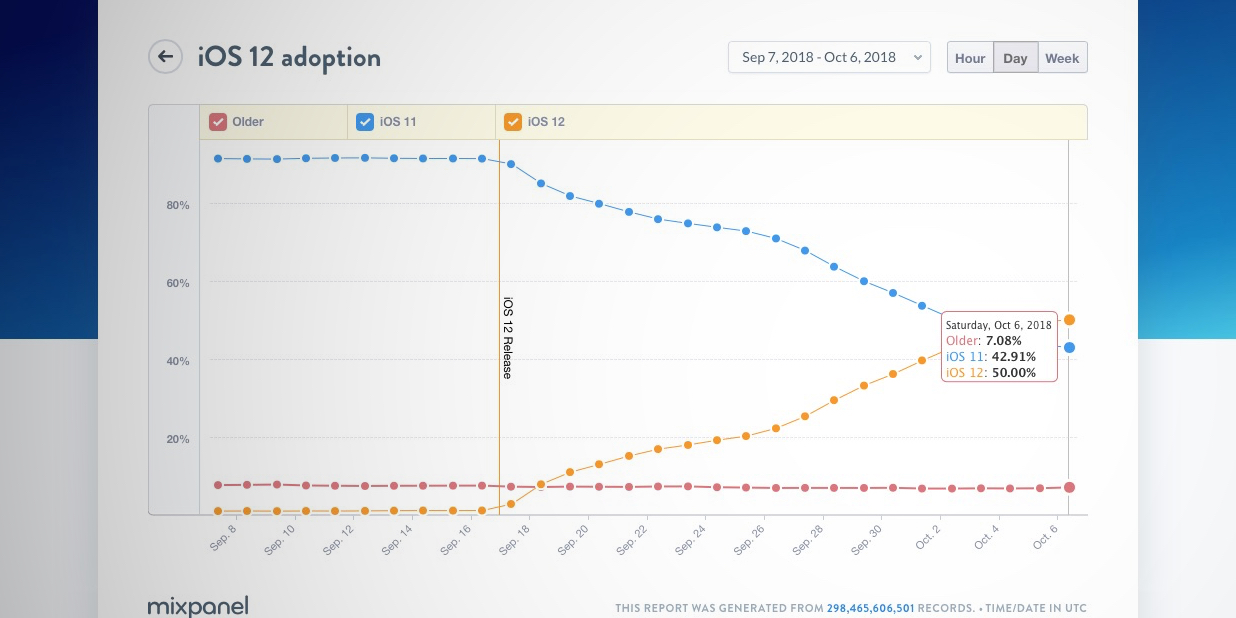 Apple launched iOS 12 with much fanfare earlier this month but early adoption appeared sluggish. However, in the following weeks, iOS 12 adoption has actually outpaced iOS 11 now, according to data from Mixpanel.

iOS 12 is now installed on more than 50% of active iPhones, iPads and iPod touch devices. It took iOS 11 a month to reach this milestone; iOS 12 has achieved it in under twenty days.

Many perceived iOS 11 as a bad year for OS updates with various complaints of instability, bugginess and sluggishness. Apple combated this narrative head on with iOS 12. The company advertises iOS 12 as a performance upgrade, with notable speedups especially on older iPhone and iPad models.

iOS 12 supports all devices that can run iOS 11, meaning the iOS 12 user base stretches all the way back to iPhone 5S.  Despite a slow start, iOS 12 adoption has surged in the last few days, almost doubling in just seven days. The positive reception from the community (with no showstopper iOS bugs hitting the headlines) surely must have helped accelerate adoption.

Mixpanel statistics — which are based on a combination of web and mobile app analytics — typically report higher percentages than Apple’s statistics which derive active iOS versions based on App Store usage. However, Apple is yet to update its official stats to include a timeframe after iOS 12 was released (Apple’s chart was last updated on September 3rd, reporting iOS 11 topped 85% adoption). Last year, Apple’s official numbers did not cross the 50% mark for iOS 11 until November.

iOS 12 uptake will likely continue to be strong for the foreseeable future. iOS 12.1 will include major new features like group FaceTime and more than 70 new emoji, which always help to incentivize people to upgrade. Apple is also readying a bevy of new hardware that will come preinstalled with iOS 12, including a new iPad Pro lineup and the iPhone XR launch on October 26.