Following Garnter’s look at the smartphone market earlier today, IDC is out this afternoon with its latest data on the wearables market. According to IDC, shipments of wearables hit 32 million units during the third quarter of 2018, up nearly 22 percent compared to last year. This growth can be partly attributed to strong Apple Watch Series 3 shipments.

Leading wearables growth are new “basic wearables” from companies like Fitbit, Garmin, and Huawei, as well as growing interest in emerging markets such as Asia/Pacific.

“Many of the new basic wearables include features like notifications or simple app integrations that bleed into smartwatch territory. This has helped satiate consumer demand for more capable devices while also maintaining average selling prices in a market that faces plenty of downward pressure from low-cost vendors and declining smartwatch pricing,” said Jitesh Ubrani senior research analyst for IDC.

Xiaomi secured the top position during the third quarter of 2018, IDC says, thanks to the Mi Band 3 and growing success outside of China. Xiaomi shipped 6.9 million units during the quarter, up from 3.6 million in Q3 2017, and secured 21.5 percent of the market.

Meanwhile, Apple came in at number two on the list. Apple launched the Apple Watch Series 4 towards the end of Q3 2018, and IDC says the new device accounted for “less than 20 percent of all Apple Watch shipments.” IDC estimates that Apple shipped 4.2 million units, up from 2.7 million the year before. Apple’s marketshare increased from 10.3 percent to 13.1 percent.

Apple managed to launch its Series 4 Watch, its first watch approved for medical use, towards the end of the quarter. The new design and sizes along with the latest version of Watch OS were welcome changes though the latest series only accounted for less than 20% of all Apple Watch shipments. The reduced price on the still affable Series 3 accounted for the majority of Apple’s shipments during the quarter.

Rounding out the top five are Fitbit, Huawei, and Samsung. Fitbit shipments fell 3.1 percent year-over-year, while Huawei grew 20.3 percent and Samsung grow 91 percent – from 900,000 to 1.8 million.

Apple does not report how many Apple Watch units it sold in any specific quarter (as will soon also be the case for iPhone, iPad, and Mac). This means IDC’s data is garnered from things like channel inventory, suppliers, and surveys and isn’t necessarily completely accurate.

Read IDC’s full breakdown of the wearables industry below. 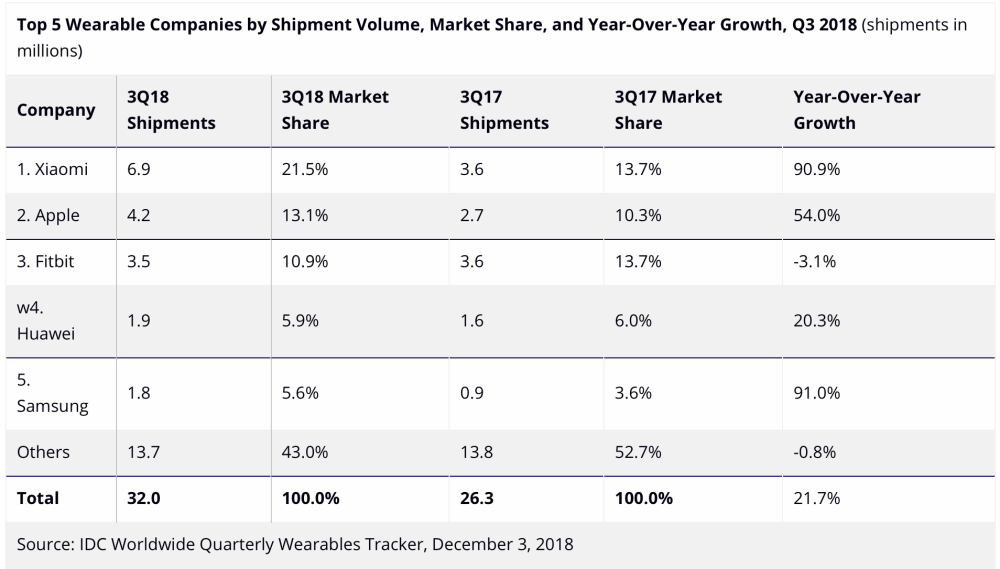 FRAMINGHAM, Mass., December 3, 2018 – Global shipments of wearable devices reached 32.0 million units in the third quarter of 2018 (3Q18), up 21.7% from the previous year according to data from the International Data Corporation (IDC) Worldwide Quarterly Wearable Device Tracker. New products from the likes of Fitbit, Garmin, and Huawei helped the basic wearables category return to growth during the quarter. Another driving factor was growing demand in markets like Asia/Pacific (excluding Japan), which accounted for more than half of all shipments and grew 21.4% over the previous year. Meanwhile, the second largest market, the United States, saw its year-over-year growth decline 0.4% as it transitions from a market driven by new users to one that relies on replacement devices and upgrades.

“Many of the new basic wearables include features like notifications or simple app integrations that bleed into smartwatch territory. This has helped satiate consumer demand for more capable devices while also maintaining average selling prices in a market that faces plenty of downward pressure from low-cost vendors and declining smartwatch pricing,” said Jitesh Ubranisenior research analyst for IDC Mobile Device Trackers. “However, this resurgence of basic wearables should be watched closely as these wearables have historically been popular due to their low-price points and simplified set of features. As more features get added and as the price differential between basic trackers and smartwatches narrows, brands could potentially move consumers upstream to smartwatches.”

“Meanwhile, the smartwatch market also evolved during the quarter as the two largest smartwatch brands, Apple and Fitbit, continued to delve deeper into the healthcare market,” added Ubrani. “The healthcare market is quickly becoming the next frontier for wearables brands to conquer. With heavy regulation and greater scrutiny, this segment will likely be the one that staves off value brands, allowing the market leaders to further cement their lead.”

“The wearables market benefits from geographic differences,” said Ramon T. Llamas, research director for IDC’s Wearablesteam. “China – the largest market for wearables and more than double the size of the U.S. market – has grown thanks to strong device development and experimentation, low-cost products, and strong demand for basic devices to draw in new users. Meanwhile, the U.S. market – while slowing down – presents an opportunity for vendors to offer more featured and higher-priced devices to current users and possibly to recapture old ones. In between the two markets are many other countries in various states of development, and this allows vendors to take different approaches to meet demand. Combine these geographic differences with the new product announcements and releases, and the stage is set for a strong holiday quarter.”

Xiaomi grabbed the top position during the quarter thanks to the success of the Mi Band 3 and significant expansion beyond its home country of China. Though typically China accounts for well over 80% of Xiaomi’s shipment volume, this quarter that share fell to 61% as the company managed to grow its presence in other markets such as India, Europe, and Middle East & Africa.

Apple managed to launch its Series 4 Watch, its first watch approved for medical use, towards the end of the quarter. The new design and sizes along with the latest version of Watch OS were welcome changes though the latest series only accounted for less than 20% of all Apple Watch shipments. The reduced price on the still affable Series 3 accounted for the majority of Apple’s shipments during the quarter.

Fitbit’s latest devices, including the Versa, Charge 3, and the Ace, helped the company slow its decline compared to previous quarters. In particular, the success of the Versa has allowed the company to once again become the second largest smartwatch vendor and IDC expects this to continue in the near term. Looking ahead, the company’s focus on improving the quality of sleep for its users will remain one of its core strengths and key differentiators in the market.

Huawei finished just ahead of Samsung to maintain its number four position worldwide, emphasizing its newest TalkBand B5 series of wristbands. This maintains its unique approach of combining a Bluetooth earpiece with a fitness tracker. Meanwhile, its Honor sub-brand introduced a new set of earphones that tracks heart rate during workouts. Overall, however, the majority of Huawei’s wearable devices remained within its home country of China.

Samsung closed some of the gap with Huawei and stretched its lead past other contenders, capturing the fifth position for the quarter. The company launched its next generation smartwatch, the Galaxy Watch, marking the first time that a wearable device moved away from its traditional “Gear” moniker to the “Galaxy” sub-brand, alongside its smartphones and tablets. Still, Samsung relies on its Gear S3 and its smart Gear Fit wristbands to drive volumes, and its connected wearables posted continued sequential growth.