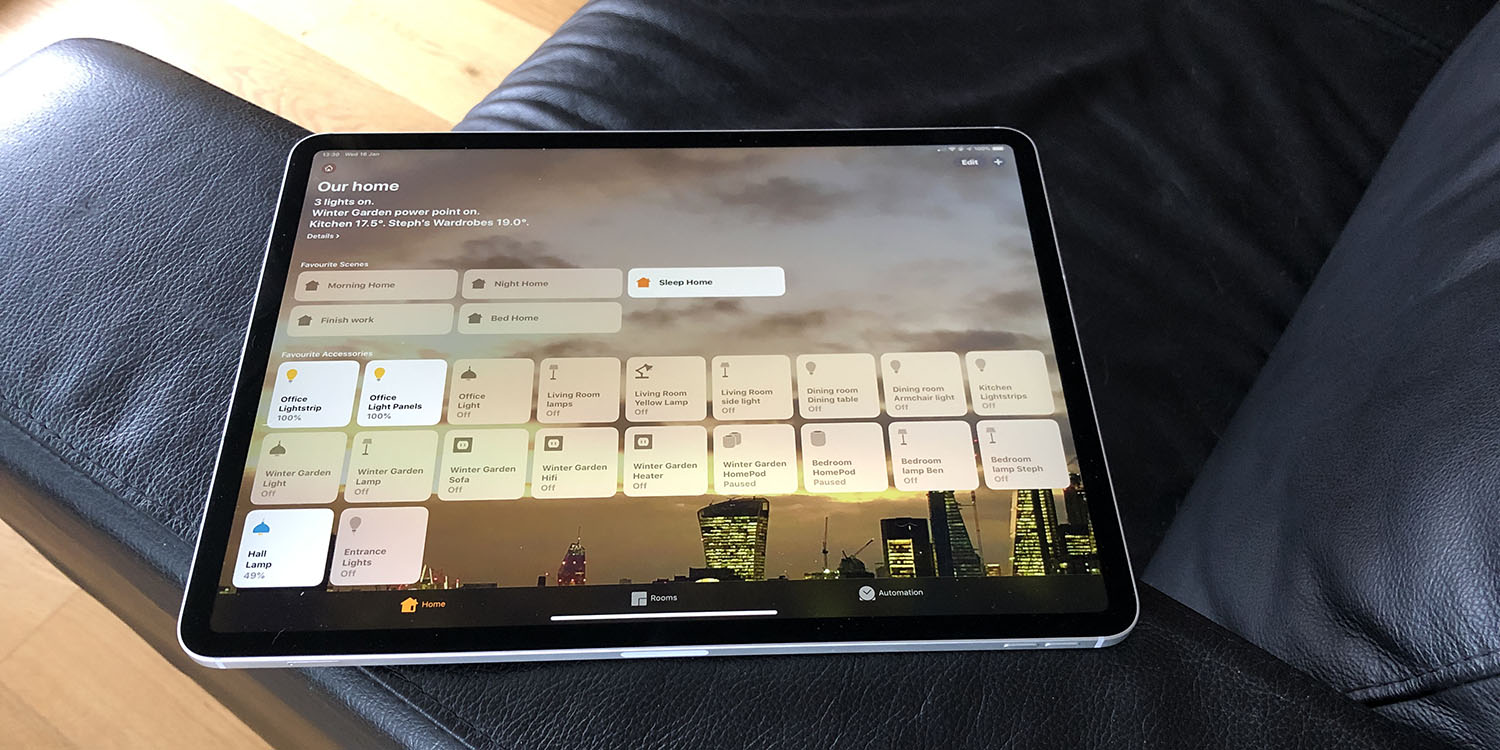 One recurring theme I’ve seen in comments on my various Smart Home Diary pieces is the view expressed by some that a truly smart home ought to be automated. That pressing on-screen buttons on an iPhone does not equate to a smart home, only automation does.

I have some sympathy for this view. ‘Anything that can be automated should be automated’ is something of a mantra for me. But automation isn’t the whole picture, and I’d like to explain why I hold that view …

Let’s begin with the things that are fully automated in my home, starting with lighting.

We use Philips Hue motion sensors to automatically switch on lighting in four areas:

When we’re cooking, then we manually switch on the overhead lights in the kitchen. But if we’re just going in there to get a drink of water, make a cup of tea, feed the cats, and so on, then the under-cabinet Philips Hue light-strips are enough. Those are triggered by a motion sensor tucked behind an alcove wall so it’s only triggered when we walk in.

Similarly, there’s a motion-sensor on the bookshelves lining the hallway which is sufficiently sensitive that it’s triggered by walking into the hallway from either direction. It’s angled so it gets triggered by walking past it at one end, and walking toward it from the other end. That switches on a table lamp that provides enough light without it being over-powering; we manually switch on overhead lights on the few occasions those are also needed.

In all three wardrobes (no surprise that Steph gets two of them, including the roomy corner one …), there are again Hue lightstrips and motion sensors on the doors to switch on the lighting when the doors are opened.

Finally, we have a platform bed with a large storage area beneath, aka ‘the cave.’ Once more, Hue lightstrips and a motion sensor switches it on when we crawl into it. 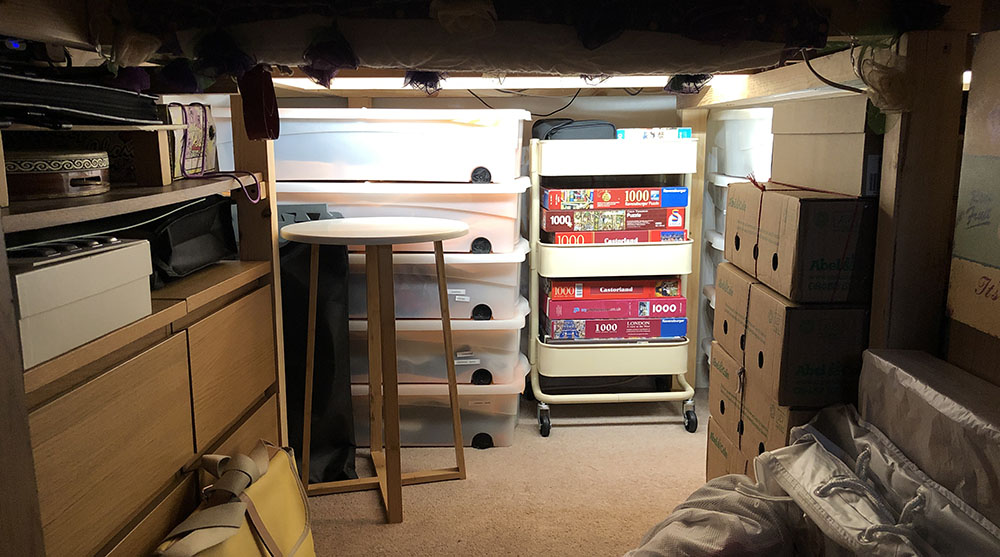 In all cases, the lights go out two minutes after motion ceases, so we don’t have to remember to switch them off, and there’s no energy wasted.

Steph gets up at 7am, so the Home app triggers lights to come on then. The PowerView app also opens the living-room and winter garden blinds, so she has natural light and a view for breakfast. In the winter, when it’s dark at that time, living room lights are switched on at the same time, by a Home app automation.

At 7.30am, when I wake, the bedroom blind opens – and in winter, the bedroom lamps also switch on. This also means there’s light when Steph returns to the bedroom to get dressed.

At 8.30am, when I go into the office, the Home app switches on the lights in there. The blind remains down as the sun comes directly in the window first thing, so the blind is opened at 11.30am, when the position of the sun isn’t going to blind me.

The winter garden gets really hot during the day in the summer, so we have a summer-only timed automation which closes the blinds at noon. There is then a sunset-triggered PowerView automation to automatically re-open them at whatever time sunset happens to be.

At 8.40am, once Steph has left for work and I’m at my desk, then our Neato robocleaner (review) has a clear path to get to work, so that vacuums the entire apartment – controlled by a timed automation in the Neato app.

Things controlled by scenes rather than automation

All the above things work because we need things to happen on a consistent schedule – either time or sunset.

But much of life isn’t like that. We don’t go to bed at a consistent time, so timed automations don’t make sense then. Neither does motion-triggered lighting in the bedroom, in case one of us goes to bed before the other. And so on.

So much of the rest of it is triggered by scenes. For example, I have a Finish Work scene for when I leave the office and head to the winter garden. That switches off the office lights and, at present, switches on a heated electric blanket used as a throw on the winter garden to effectively turn it into a heated sofa!

There are other scenes for things like heading to bed (turning on the bedroom lamps and switching most other things off). There’s also a scene for morning routines at the weekend, because then we don’t get up at a predictable time.

Finally, there are buttons for all the individual lights and appliances, because there are way too many permutations to have everything controlled by scenes.

For example, if we’re sitting in the living room, it’s nice to have mood lighting to provide enough light to move around the room without light reflections in the windows spoiling the view. Blue works nicely for that, as does purple. It’s good to have variety there.

If we’re having friends over for dinner, we might want warmer mood lighting – yellow or orange, for example – coupled to a dimmed overhead light above the dining table. If one of us is sat in an armchair reading a paper book, we probably want the overhead light above the chair on at some level of brightness. In the office in the day, I use a Nanoleaf light panel on the wall beside/behind me plus Hue lightstrips behind the desk to provide pleasant light; when it’s dark, I prefer the light-strip and ScreenBar. If we’re in bed reading, Steph might want her bedside lamp on to read a paper book while I prefer mine off to read on my iPad without reflections in the window. And so on.

There are literally dozens of different lighting permutations we might want depending on circumstances. These can’t be automated, and it makes no sense to create a confusing mess of scenes to attempt to cater for all the different possibilities.

Indeed, as some scenes are only used in summer and others only in winter, I prefer to delete and recreate these twice a year rather than clutter up the screen with unnecessary ones.

So no, smart homes aren’t all about automation

Automation plays a very important role in a smart home. If I want something to happen consistently on a predictable schedule, or a particular event (like movement) to always trigger a particular response (like switching on a hall light), then I’ll automate it. But manually triggered scenes are more appropriate for some things, and individually controlled devices better for others. It’s all about having the right mix.

Now, we could get into semantics here. Is a remote control button on an iPhone ‘smart’? To me, if it’s a scene, then definitely – one button doing multiple things. If it’s controlling a single device? Even then, it’s arguable, I’d suggest. Being able to control any device in the home from any iPhone, iPad, Apple Watch or HomePod is certainly a smart capability to have.

That’s not to say I wouldn’t like more intelligence. I definitely would. I’d love it, for example, if sitting up in bed automatically opened the blind if it is closed. (That one would probably be just about do-able with a carefully positioned motion-sensor and some shielding, but would be way more trouble than it’s worth.) If it could recognise I’m sat in an armchair and have opened a paper book and switch on the overhead light. If it could recognize that starting to set a dining table required the overhead light on, and that sitting down to eat should dim it somewhat.

We could probably come up with scores of examples of what a truly smart home should do – and please do, in the comments. But in the meantime, it’s definitely not the case that automation is the One True Way.