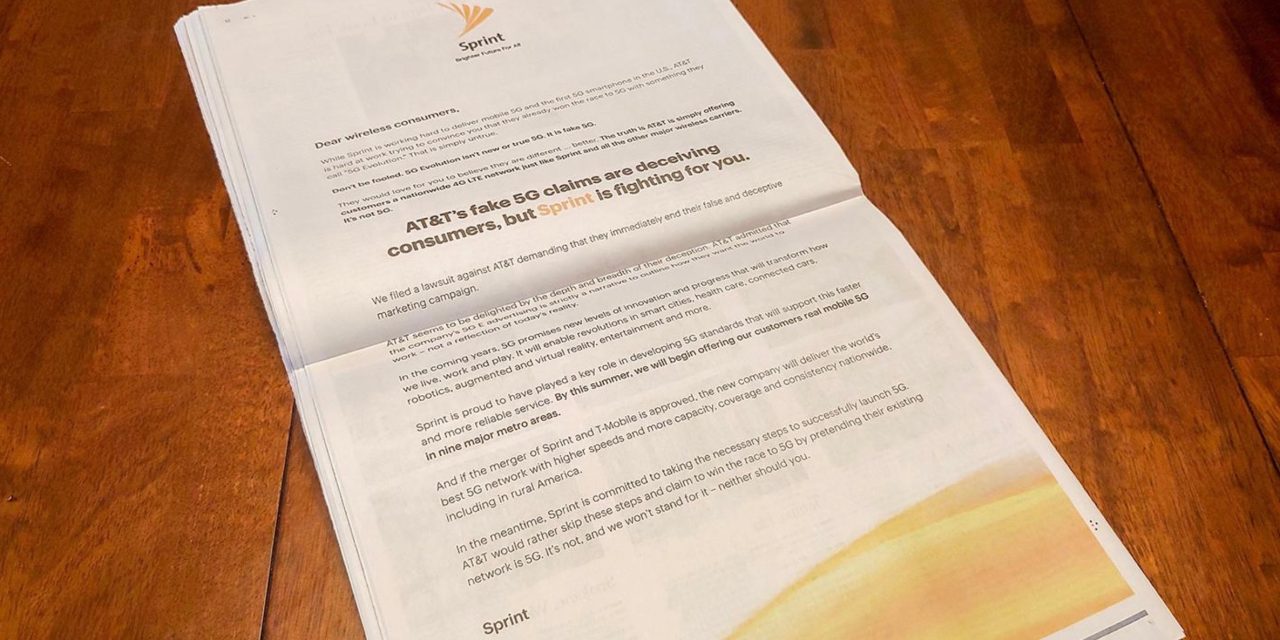 Four days after AT&T started slapping its ‘5G E’ icon on iPhones and iPads running the latest iOS beta last month, Sprint filed a lawsuit to bar AT&T from being able to use the marketing tactic for what is really advanced 4G LTE service that’s been around for years. Now, Sprint has taken the battle to the next level by taking out a full-page ad in The New York Times blasting its competitor for what it calls a “false and deceptive marketing campaign.”

As noted by Ars Technica, while Sprint is trying to ban AT&T from using the 5G E marketing term with a federal lawsuit, it used a full-page ad in the NYT over the weekend to share its perspective with consumers.

While Sprint is working hard to deliver mobile 5G and the first 5G smartphone in the US, AT&T is hard at work trying to convince you that they already won the race to 5G with something they call “5G Evolution.” That is simply untrue.

Don’t be fooled. 5G Evolution isn’t new or true 5G. It is fake 5G. They would love for you to believe they are different… better. The truth is AT&T is simply offering customers a nationwide 4G LTE network just like Sprint and all the other major wireless carriers. It’s not 5G.

We filed a lawsuit against AT&T demanding that they immediately end their false and deceptive marketing campaign.

AT&T seems to be delighted by the depth and breadth of their deception. AT&T admitted that the company’s 5G E advertising is strictly a narrative to outline how they want the world to work—not a reflection of today’s reality.

There’s also a large, bold statement in the middle of the ad that says “AT&T’s fake 5G claims are deceiving consumers, but Sprint is fighting for you.”

Sprint’s lawsuit is based on a study it commissioned that found that 54% of consumers thought 5G E was better or the same as true 5G service, with 43% believing that if they picked up an AT&T smartphone today it would be 5G compatible.