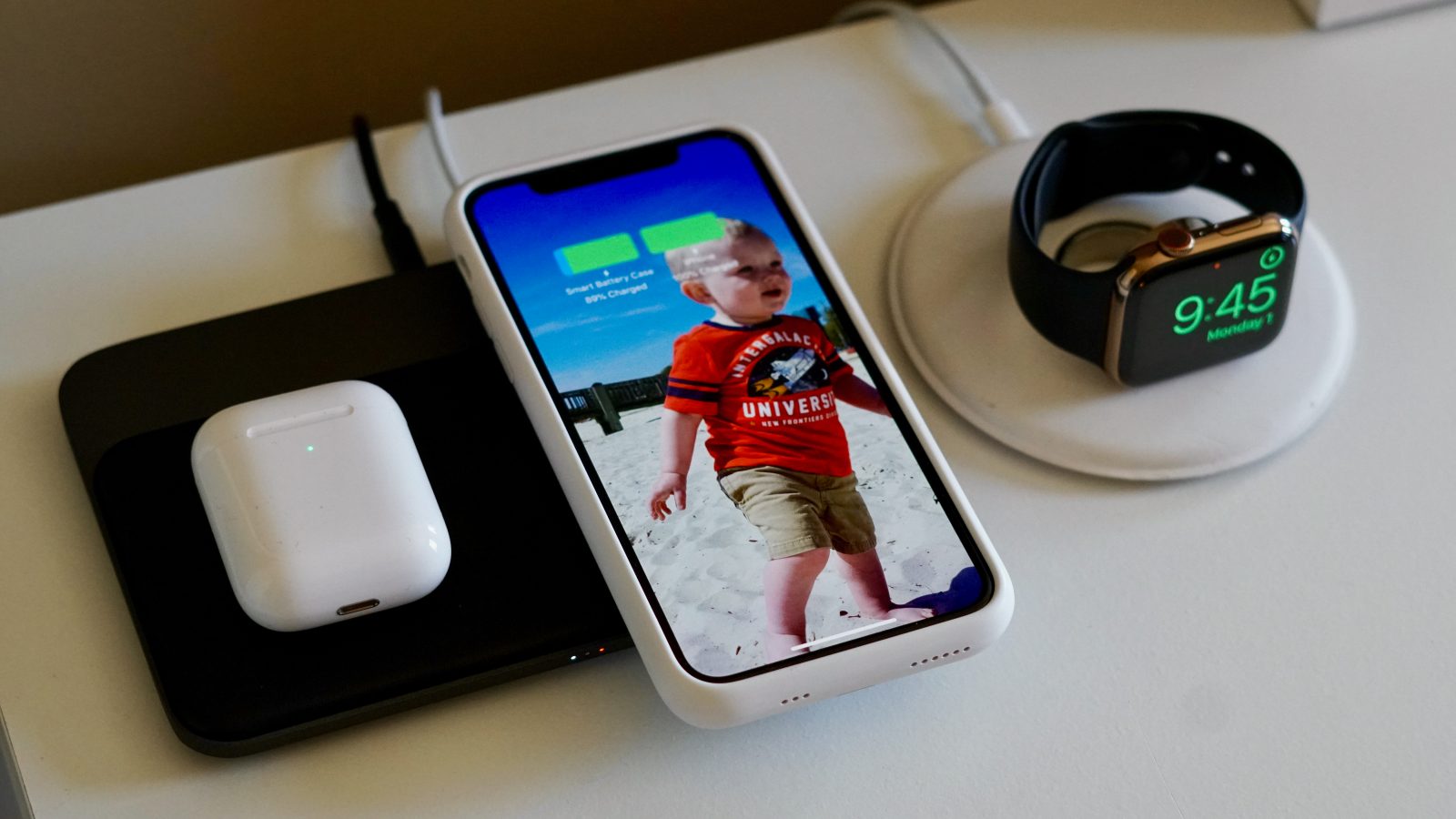 At last, new AirPods have arrived! That’s great news for early adopters who have experienced serious battery life degradation like me. If you have a fresh pair of the original AirPods, you can probably sit this version out for now.

The differences in features aren’t night and day, but there’s also never been a better time to buy AirPods if you’ve been undecided about the purchase. The new AirPods are just as great as the originals — you just have to decide between the classic wired or new wireless charging case.

AirPods are my daily carry headphones, always in my pocket when I leave home and always in my ears at the gym or on runs. This is my upgrade experience with the second generation AirPods.

First, a moment of appreciation for my original AirPods. I bought them sight-unseen in December 2016 and used them almost every day since they arrived on launch day. Before AirPods, I bounced between different Bluetooth headphones primarily to play music from my Apple Watch during workouts without my iPhone. The original AirPods immediately became my go-to headphones for almost everything including playing podcasts on my iPhone and sometimes even watching TV late at night.

I logged over 500 miles running with the original AirPods, including through windy, rainy, and high humidity workouts and even one half-marathon race. I later switched to another solution for those hours-long runs, especially after battery life started to degrade after two full years of regular use, but my original AirPods served me well. 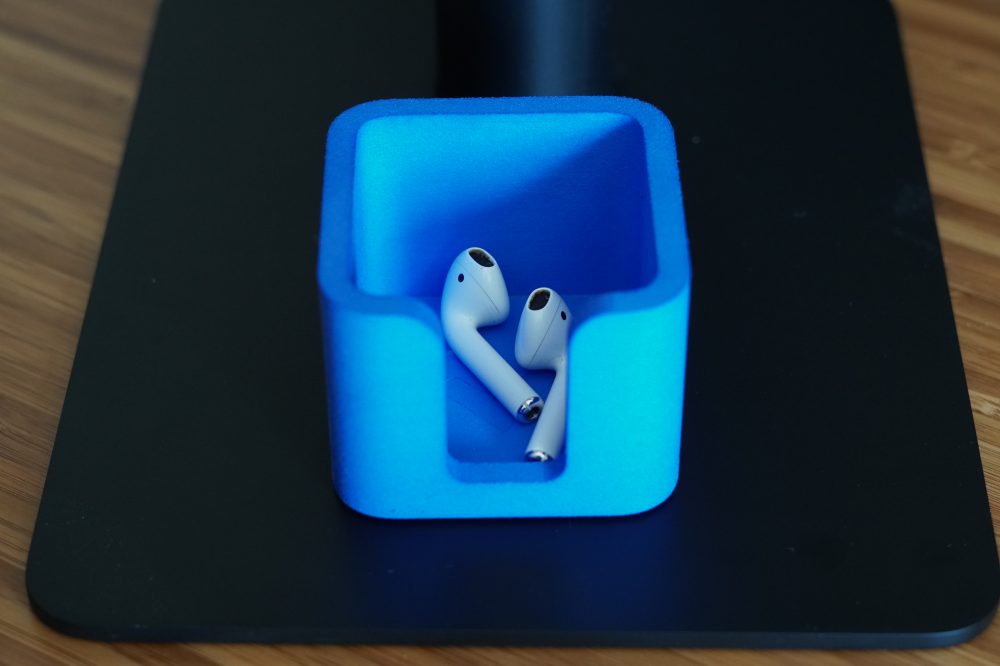 For that reason, I didn’t need much of a push to upgrade to the new AirPods. I’m already sold on the product. I just needed to reset my battery life, but didn’t want to buy the same product over again if a new version was coming soon.

The difference between the originals and the new AirPods isn’t tremendous. It all comes down to a new Apple H1 chip that replaces the original W1 chip. H1 powers the ‘Hey Siri’ feature, offers 3 hours talk time over 2 hours before, 30% lower gaming latency, 2x faster switching between active devices, and 1.5x faster call connection.

New AirPods look the same, charge in their case the same, and offer the same 5-hour battery life between charges. They even cost the same unless you opt for the new wireless charging case instead of the standard case. So how are they? 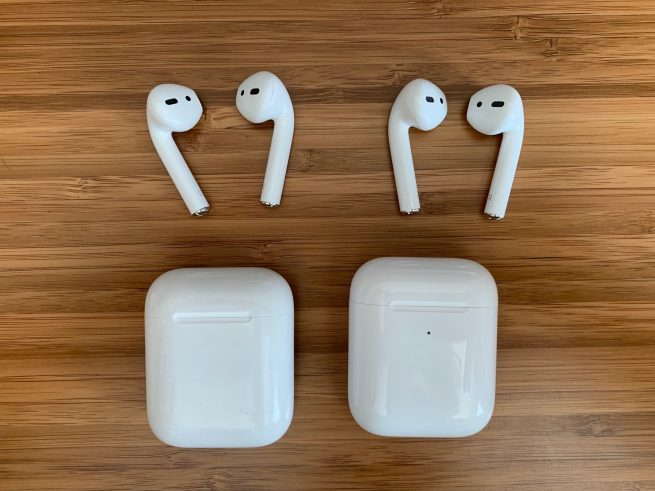 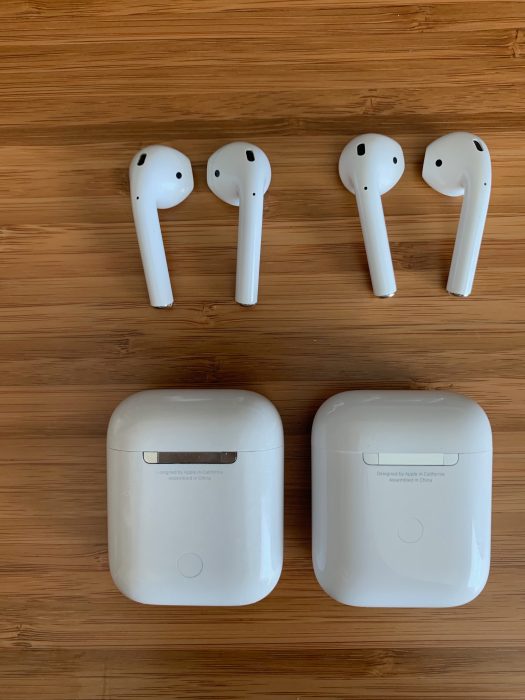 I removed the original AirPods from my Bluetooth device list, then dropped the #2 from the new AirPods. Then my first run with new AirPods didn’t go so well. The new AirPods would pair and play music for about 10 seconds, then disconnect.

Apple also released the watchOS software update to make new AirPods work well with the Apple Watch a few days after the new AirPods were released. I removed and re-paired new AirPods to my iPhone and updated from the developer beta version of watchOS 5.2 to the release version. The experience has been back to excellent since the initial blip. 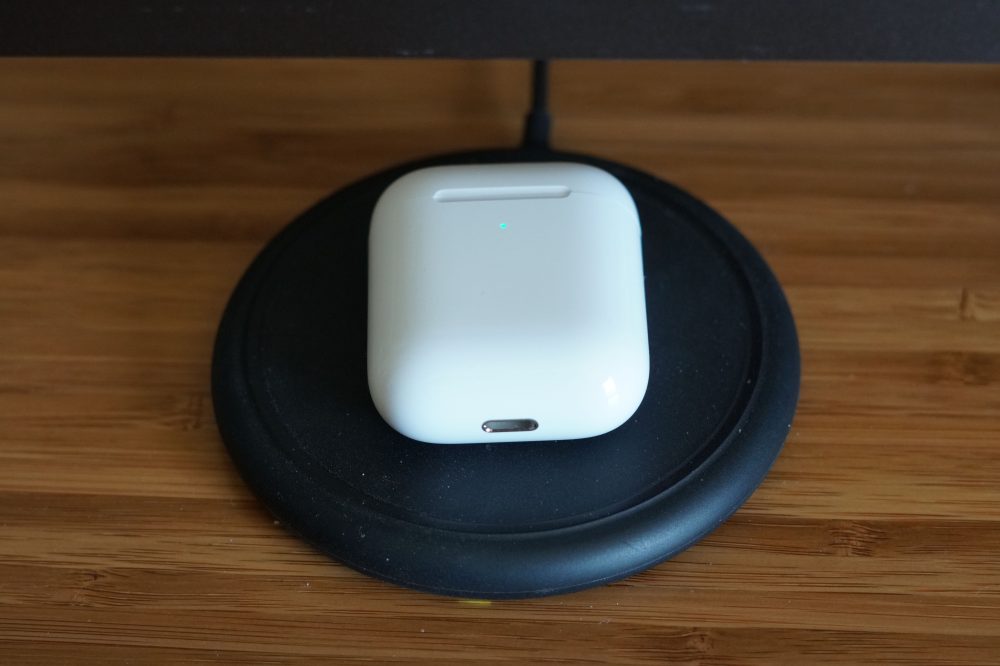 “Hey Siri” support is the most noticeable new feature of second-gen AirPods for upgraders. Activating Siri before required a double-tap on an AirPod or using Hey Siri on a paired device. Activating Siri with a voice command on AirPods is really natural and fast.

The double-tap gesture was never ideal for invoking Siri. Since Apple added the ability to remap the gesture to other actions, I’ve used Play/Pause for the left AirPod and Next Track for the right AirPod, relying on raising my wrist and speaking into my Apple Watch to use Siri on workouts.

“Hey Siri” on new AirPods even works with the Apple Watch when you’re away from your iPhone as long as there’s a network connection (like Wi-Fi or LTE). I’ve been testing this with indoor and outdoor runs and I’m hooked. I’m not sure I would upgrade for “Hey Siri” alone if my old AirPods weren’t wearing out, but it’s a great feature to use once you have it.

Being in motion and activating Siri with a voice command without breaking your stride or worrying about where your wrist is positioned is just one less point of friction. I’ve had great luck with voice commands including starting specific workouts like a 30 minute outdoor run, increasing music playback volume, changing music, and checking alerts and messages from Apple Watch with “Hey Siri” on AirPods during outdoor runs. 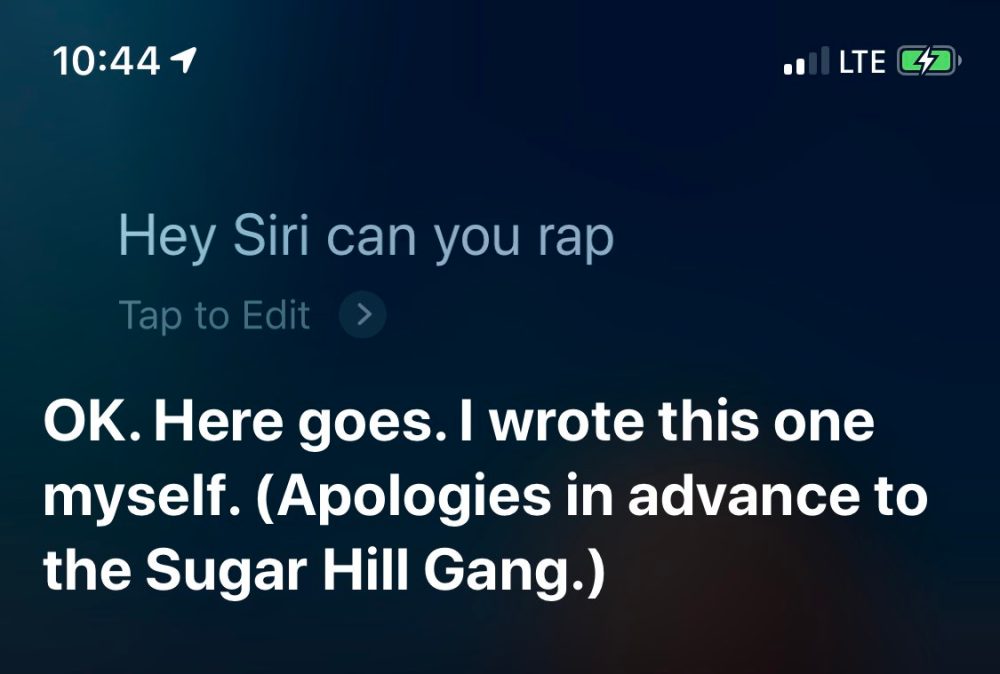 Siri is still Siri, though, so mistakes will happen. The challenge is amplified when I’m running on a treadmill (I much prefer outdoor runs). For example, “Hey Siri, turn it up” was interpreted as “Hey Siri, can you rap” which had an entertaining result but convinced me to just reach for the iPhone volume buttons in that instance.

My other complaint with “Hey Siri” on new AirPods is that you need the feature turned on for the paired device for it to work on AirPods. Prior to new AirPods, I used “Hey Siri” on my Apple Watch and HomePod, but kept it off on my iPhone, iPad, and Macs.

My thinking is Apple Watch and HomePod are often hands-free devices like AirPods, but I’m usually holding my iPhone, iPad, or Mac if I want to use Siri. This limits accidentally triggering the wrong device too. I’ve now turned on “Hey Siri” for each device so the feature always works with AirPods, but this arrangement might not stick for me. 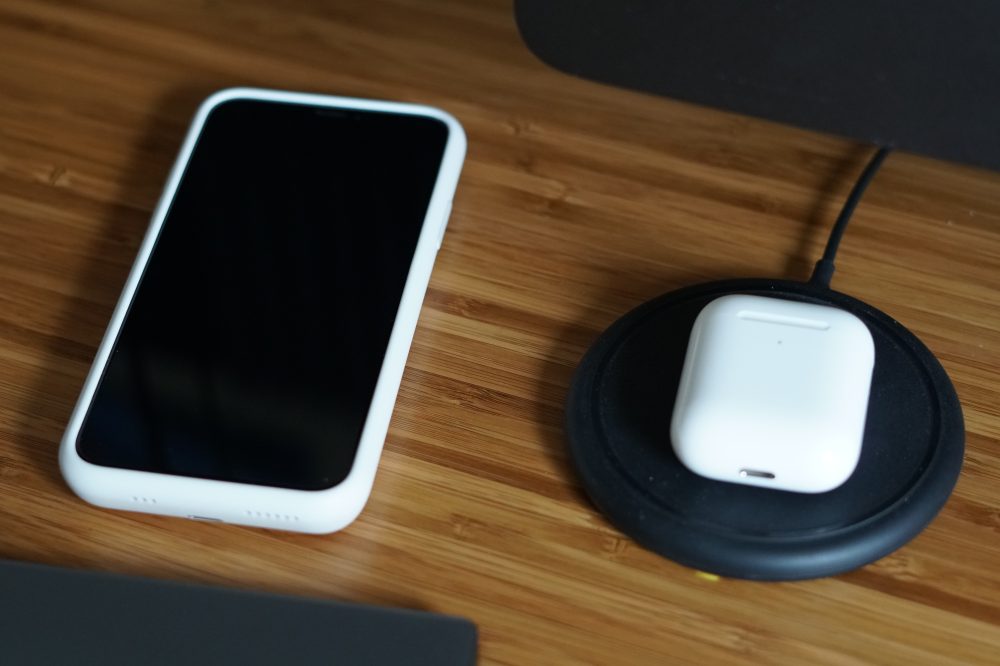 The other major change with new AirPods isn’t actually included for all customers: wireless charging.

One one hand, I totally understand that Apple could almost never make as many sets of the original AirPods as it could sell. Naturally, there was room for a more expensive version of AirPods to exist.

I value wireless charging a lot, but I think a lot of less tech-savvy AirPods customers who would appreciate the feature will be turned off by the price premium. 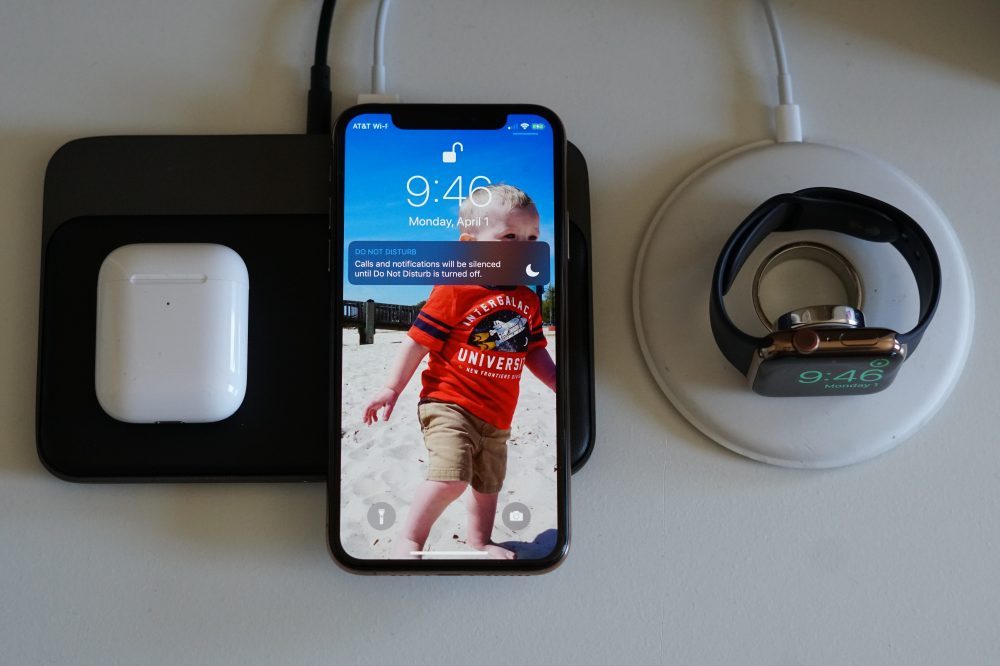 The story around AirPods and wireless charging is a bit awkward though.

Evidence has convinced me that new AirPods were ready to ship last year, but Apple thought it could finish its special AirPower wireless charging mat and ship both at the same time. Then Apple released new AirPods with the wireless charging case in late March, waiting nine days to later announce that the AirPower project was cancelled.

In the wake of AirPower’s cancellation, I’ve started taking alternative solutions seriously. Nomad which makes accessories for Apple products has three products that I recommend for wirelessly charging multiple devices.

#1 is ideal for my kitchen where I’ll leave my iPhone and AirPods to top off during the day. I ordered one on Friday night and it arrived from Amazon on Sunday morning. I’m using it in the bedroom until the 3-in-1 version arrives. It works great for AirPods and well with iPhone without a case, but it’s a bit sensitive about the iPhone with the Smart Battery Case. Still recommended!

#2 now appears to be discontinued and replaced with #3, but did confuse me on Friday night when I mistook it for #3 and placed an order from Best Buy before cancelling.

#3 is ideal for my bedroom for charging my iPhone, AirPods, and Apple Watch while I’m sleeping. It’s also the perfect single travel charger. The only problem is Nomad is currently slammed with orders in the wake of AirPower’s demise. New orders are backordered through mid May. 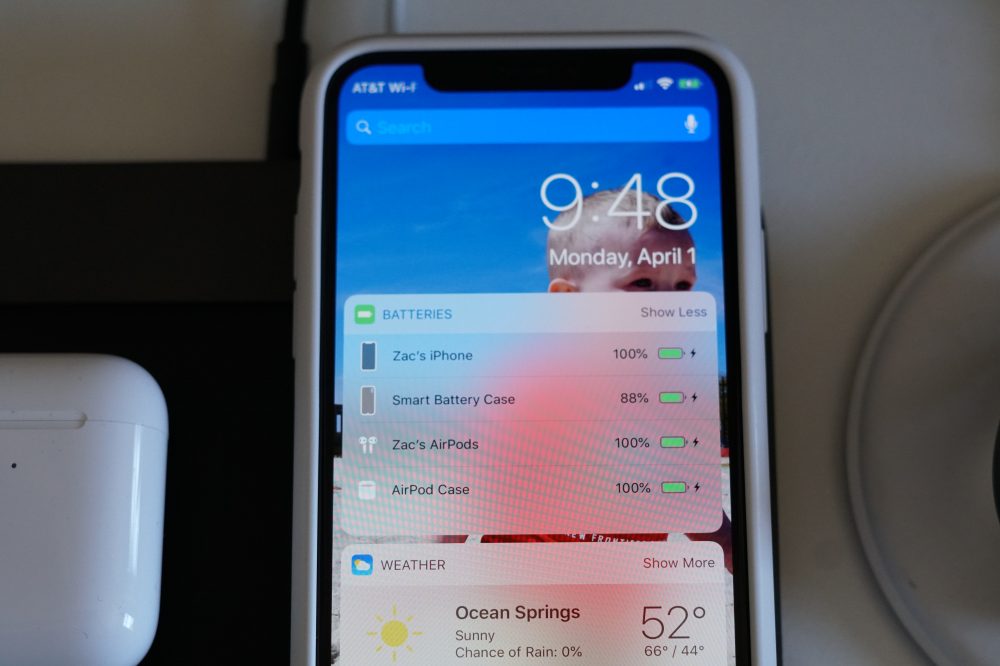 I would also love to see the awesome AirPower charging status animations and status screens recycled for wireless charging without AirPower in a future iOS update. The best way to check charging levels today is with the optional Batteries widget, but it doesn’t include the Apple Watch unless you’re wearing it and it’s kind of hidden and utilitarian.

Back to AirPods! There’s not much more to say from me. I loved the original AirPods and would have paid more for them after two years of regular use. New AirPods have fresh batteries, “Hey Siri”, and optional wireless charging, and I did pay more!

For runs longer than 6 or 7 miles, Bose SoundSport Free is still my truly wireless headphone choice due to sound isolation and how it affects volume and battery life. But the reported and leaked Beats Powerbeats Pro truly wireless headphones look like a dream come true for AirPods fans who want a little more oomph out of the otherwise stellar AirPods experience.

I expect both AirPods and the rumored Powerbeats Pro will be regulars in my wireless headphone rotation, but most potential customers are probably best served with the more sleek and portable AirPods.

Want to read more about Apple’s second-gen AirPods? Check out these stories: 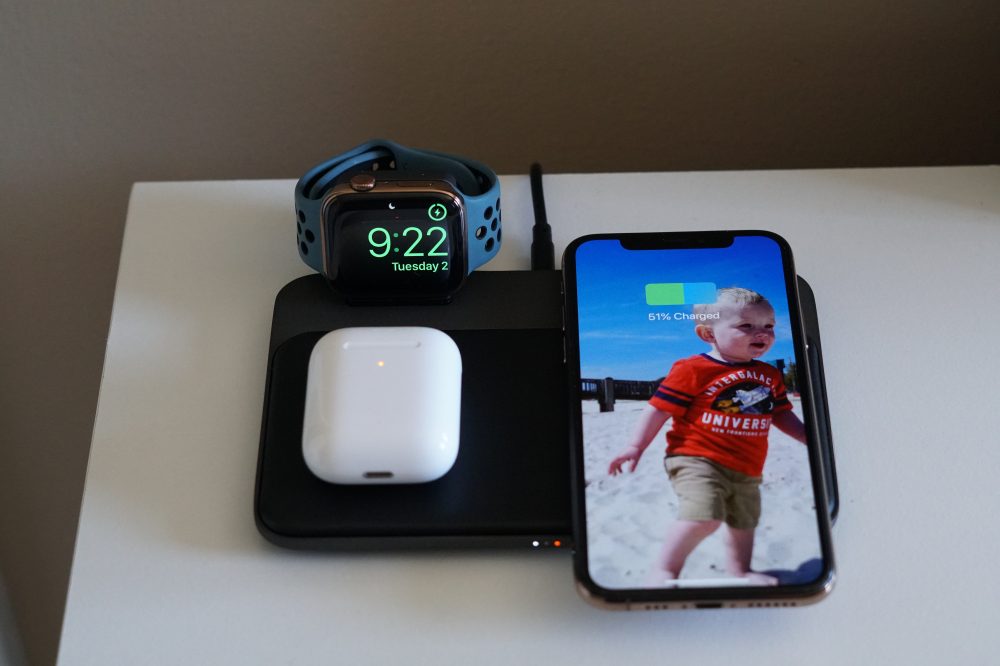 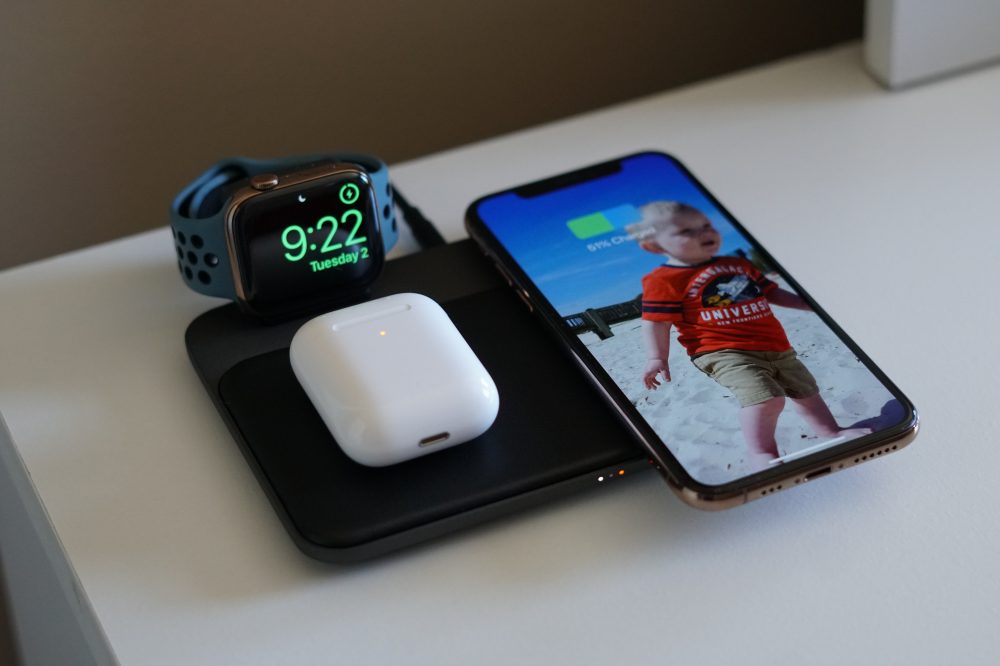 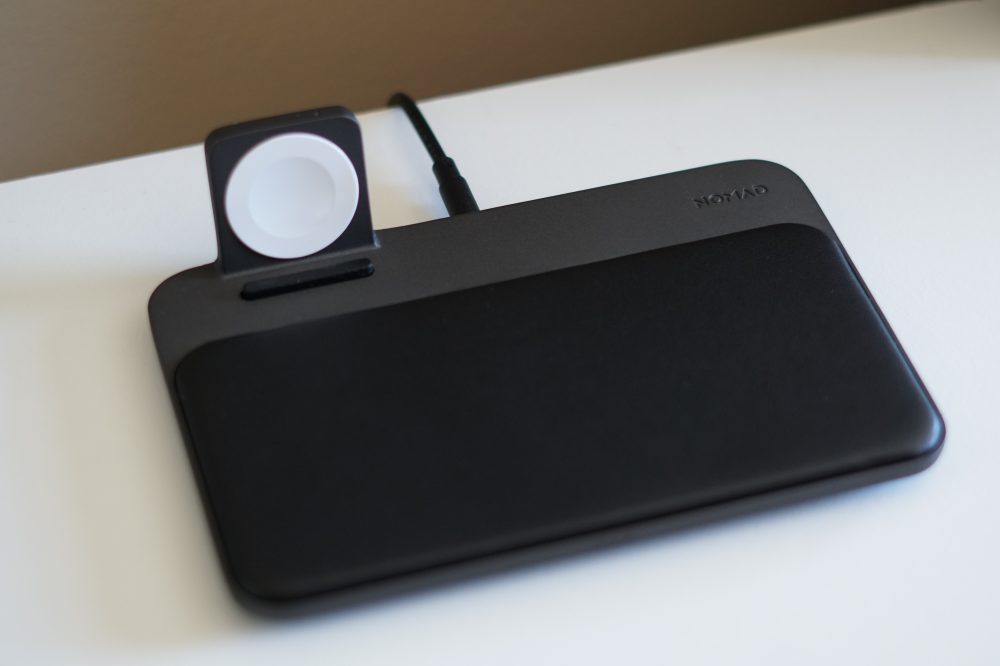