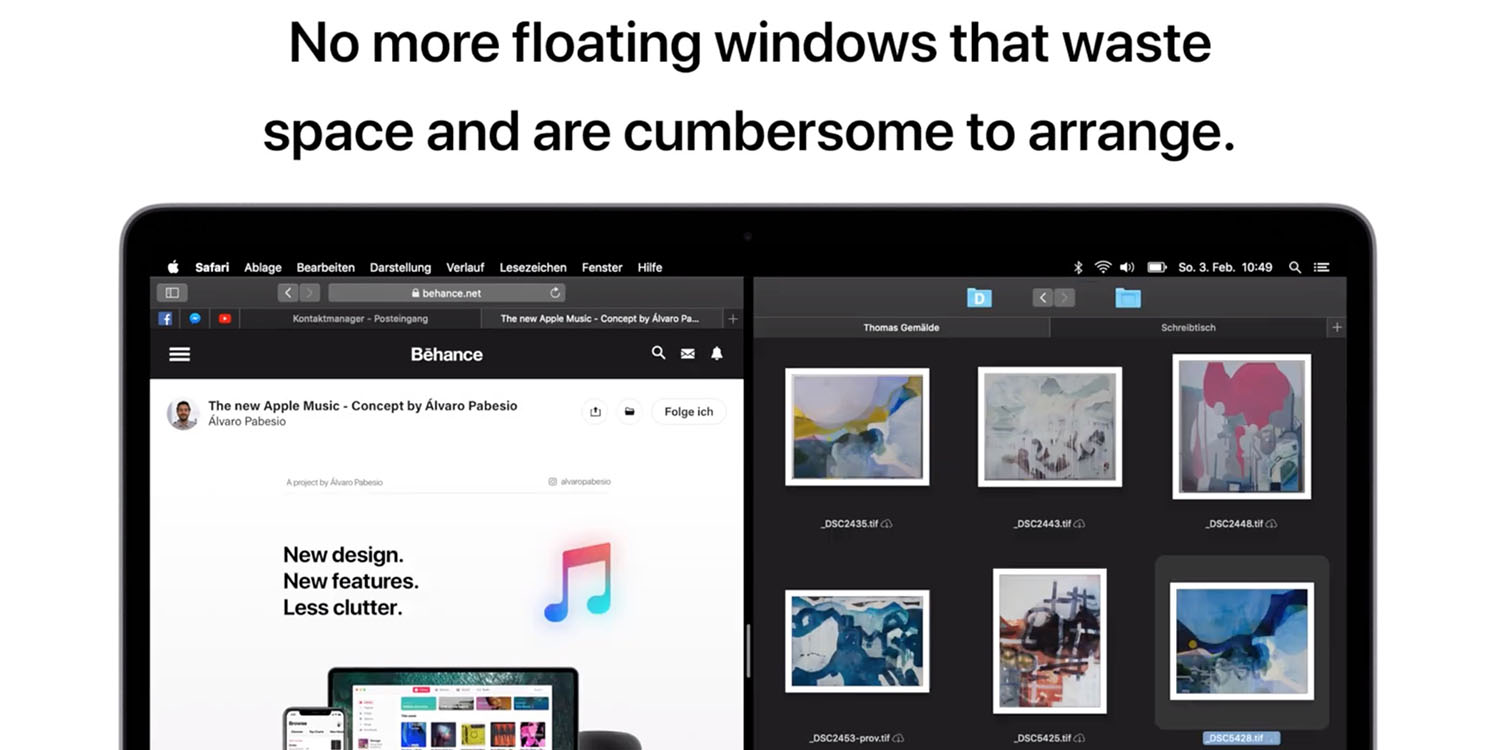 A German video editor has created a concept video (below) showing what he describes as ‘a simple and efficient macOS.’ What is depicted is a macOS/iOS hybrid, in which traditional app windows are largely replaced by iPad-style split-screen views.

No more floating windows that waste space and are cumbersome to arrange. Instead, apps always use the full screen, and macOS has fast, easy and flexible split-screen capabilities.

The video shows apps being dragged from the dock to left, right, top or bottom of the screen, and snapping into place. With more than two apps, they can be snapped to any quarter of the screen.

He also borrows the app history from the iPad dock to create a Mission Control-style screen of recently used apps.

Weinreich suggests that macOS could apply the same intelligent power management features as iOS to freeze unused background apps, so that ‘there is no need to close or minimize an app.’

He illustrates how four-finger gestures can be used to switch apps between fullscreen and split-screen modes, with the ability to drag apps to specific areas of the screen.

Apps can also be dragged onto each other in the ‘Springboard’ – his replacement for Mission Control – to create an instant split-screen desktop space.

Weinreich also borrows slide-over from the iPad for floating apps, the first time we get the ability to freely position and resize an app in the way we can today.

In this macOS/iOS hybrid, we also get iOS-style widgets, Control Center, and Notification Center, all integrated with his Springboard screen.

For large displays, like the iMac and external monitors, Weinreich modifies his approach a little, apps no longer taking up entire screens – or half/quarter screens in split-view mode – but instead looking like conventional windowed apps. However, they still snap into place automatically.

The concept is a pretty slick creation, and that’s what gives me nightmares. There are all kinds of silly concept videos out there with things Apple would never do in a million years. This one looks kind of frighteningly plausible as a place the Cupertino company could end up in five or so years from now.

Apple has long said it has no plans to converge iPads and Macs, and I believe it on the hardware front, but it has been gradually bringing the operating systems closer together. At a time when we’re all hoping iOS 13 will give us more Mac-like iPads, this video shows a possible dystopian future of a more iPad-like Mac.

Do you share my horror at a process I’ve worried about now for many years, and stand ready to defend your arbitrarily sized and positioned windows against the forces of evil, or do you think the macOS/iOS hybrid concept has merit? Let us know in the comments …