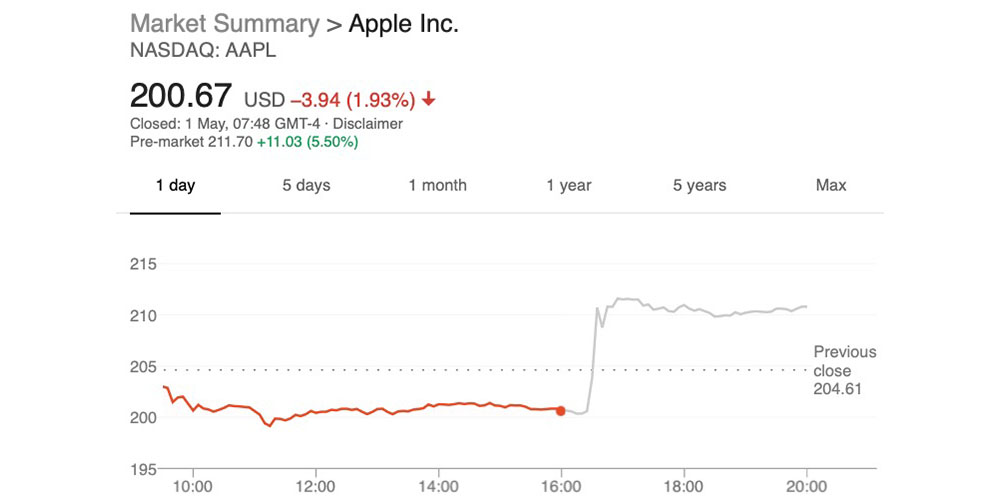 Wall Street was happy with Apple’s earnings report yesterday, despite it revealing a steep fall in revenue from iPhone sales. Pre-market trading shows AAPL at $211 at the time of writing, more than 5% up on yesterday’s close. That sees the stock heading back toward a trillion dollar market cap again.

iPhone sales were down 17% year-on-year in revenue terms. But there are five reasons why the market was happy by what it saw and heard yesterday …

First, while revenue was dramatically down from the $61.1B seen in the same quarter last year, it beat market expectations. The market was expecting somewhere around $57B, and Apple actually announced $58B – toward the high end of its guidance.

As ever with Wall Street, the actual numbers matter little: the stock price impact is all about reality versus expectations. The reality wasn’t great, but expectations were even lower.

Apple’s revenue always drops between fiscal Q2 and Q3, one obvious reason being that people know new iPhones are likely to be coming in September, so if you’re thinking of upgrading this quarter, you’re always going to be better off waiting until then.

Apple is indeed forecasting lower revenue in Q3, but it’s suggesting that the decline will be smaller than usual. The company is guiding between $52.5B and $53.5B, which would be a drop of 10% versus a more typical 15%.

As MarketWatch notes, however, a stronger Q3 is not expected to be based on iPhone sales.

Chief Financial Officer Luca Maestri provided an interesting answer for why Apple expects that change — he said iPhone sales will only be helped by an easier comparison with last year’s sales, while it will be the other products that actually boost Apple’s revenue.

”We expect that we continue to have strong revenue growth from the non-iPhone categories, as we’ve had for the first half of our fiscal year,” Maestri said.

That very much supported the view of analysts that the worst is now behind us.

iPhone and Mac sales were down, but everything else was strongly up, as Tim Cook said yesterday.

Our March quarter results show the continued strength of our installed base of over 1.4 billion active devices, as we set an all-time record for Services, and the strong momentum of our Wearables, Home and Accessories category, which set a new March quarter record. We delivered our strongest iPad growth in six years

iPad sale were up 18%, Wearables (Apple Watch and AirPods) sales by almost 30% and Services revenue increased by almost 25%.

Cook said that while Mac sales were down 5%, that was due to supply constraints, not reduced demand.

China has been a huge challenge for Apple, thanks to increasing flagship smartphone competition from local brands like Xiaomi, OnePlus and Huawei. Apple saw its revenue in the country fall by more than a quarter in the holiday quarter.

There was a further decline in Q2, but a smaller one, at 21.5%. Cook said yesterday that there were several reasons for optimism in the region – one of which is that Apple’s iPhone price cuts seem to be working.

Our year-over-year revenue performance in Greater China improved relative to the December quarter and we’ve seen very positive customer response to the pricing actions we’ve taken in that market, our trade-in and financing programs in our retail stores, the effects of government measures to stimulate the economy, and improved trade dialogue between the United States and China

Analysts say that the only way Apple’s Q3 guidance makes sense is if the company is confident about turning things around in the region. MarketWatch again.

“The relative stabilization in China is a principal reason Apple can return to overall growth in the June quarter, two quarters earlier than we previously expected,” BTIG analyst Walter Piecyk wrote in a note Tuesday evening, while increasing his price target on Apple stock to $234 from $220. “To be clear, it’s still declining, just not as much and without impacting gross margins as much as we had feared.”

If Apple can at least show even revenue in the second half while continuing to weather iPhone sales declines, Cook and Co. will be able to claim a major win.

Given our confidence in Apple’s future and the value we see in our stock, our Board has authorized an additional $75 billion for share repurchases. And because we know many of our investors value income, we’re also raising our quarterly dividend for the seventh time in less than seven years to $0.77, an increase of about 5% from the previous amount.

We paid over $14 billion in dividends and equivalents over the last four quarters alone, making us one of the largest dividend payers in the world. Going forward, we continue to plan for annual increases in dividends per share.

We’ll see shortly whether the pre-market trading price holds once the market opens.