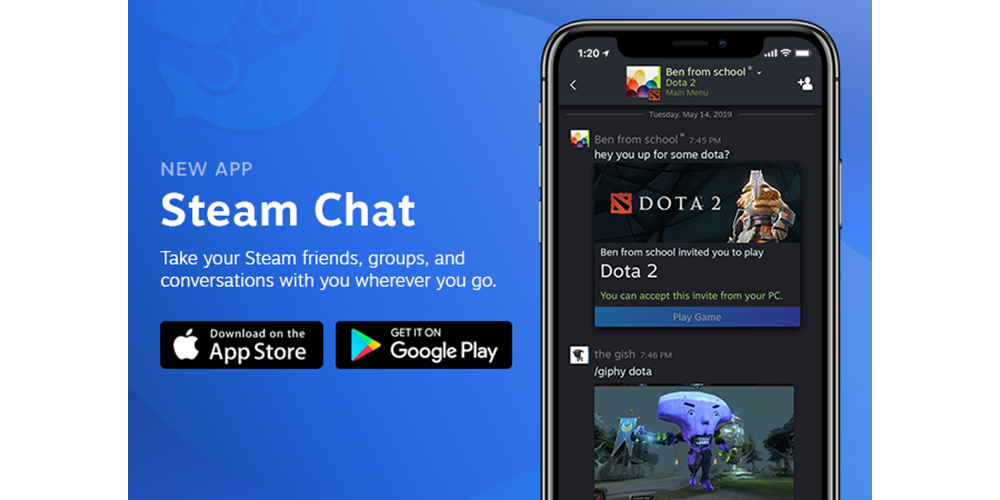 Just a week after Steam Link finally came to iOS, allowing players to stream games from their Mac, Steam Chat for iOS and Android has also been released.

Steam Chat offers most of the key features of Steam chat on the Mac, but not all …

Take your Steam friends, groups, and conversations with you wherever you go.

Friends List – See who’s in game or online at a glance. You’ll see your custom categories and favorites bar just like you can on your PC [or Mac]

Invite Links – Add new friends on Steam with a link. Generate an invite link you can text or email.

Group Chats – Get everyone on the same page. Groups make it easier to do things like stay in touch with your communities and organize game night with your best friends.

As The Verge notes, you don’t yet get voice chat, but Valve says that will follow at a later stage.

It’s basically like being on your computer. It’s super handy & I’m thankful I can send memes from my phone to steam friends now lol.

A dedicated mobile chat app for Steam is something that I wasn’t expecting so soon after the launch of Steam Link on iOS, but oh man, it is so much better than the chat functionality in the Steam Guard app.

Steam Chat for iOS is a free download from the App Store.

The app had rather an easier path to the iPhone and iPad than Steam Link, which took a year to finally make it into the App Store.

Around this time last year, Valve revealed that Apple had rejected Steam Link from the App Store. Apple apparently thought that the app would violate its “store-within-a-store” App Store guideline. Further, Apple executive Phil Schiller suggested in an email to a user that the app violated “a number of guidelines around user-generated content, in-app purchases, [and] content codes.”

At that time, Schiller said that Apple had discussed the issues with Valve and noted that the two were working together to bring Steam Link to iOS. Now, nearly a year later, Steam Link is officially available for iPhone, iPad, and Apple TV.