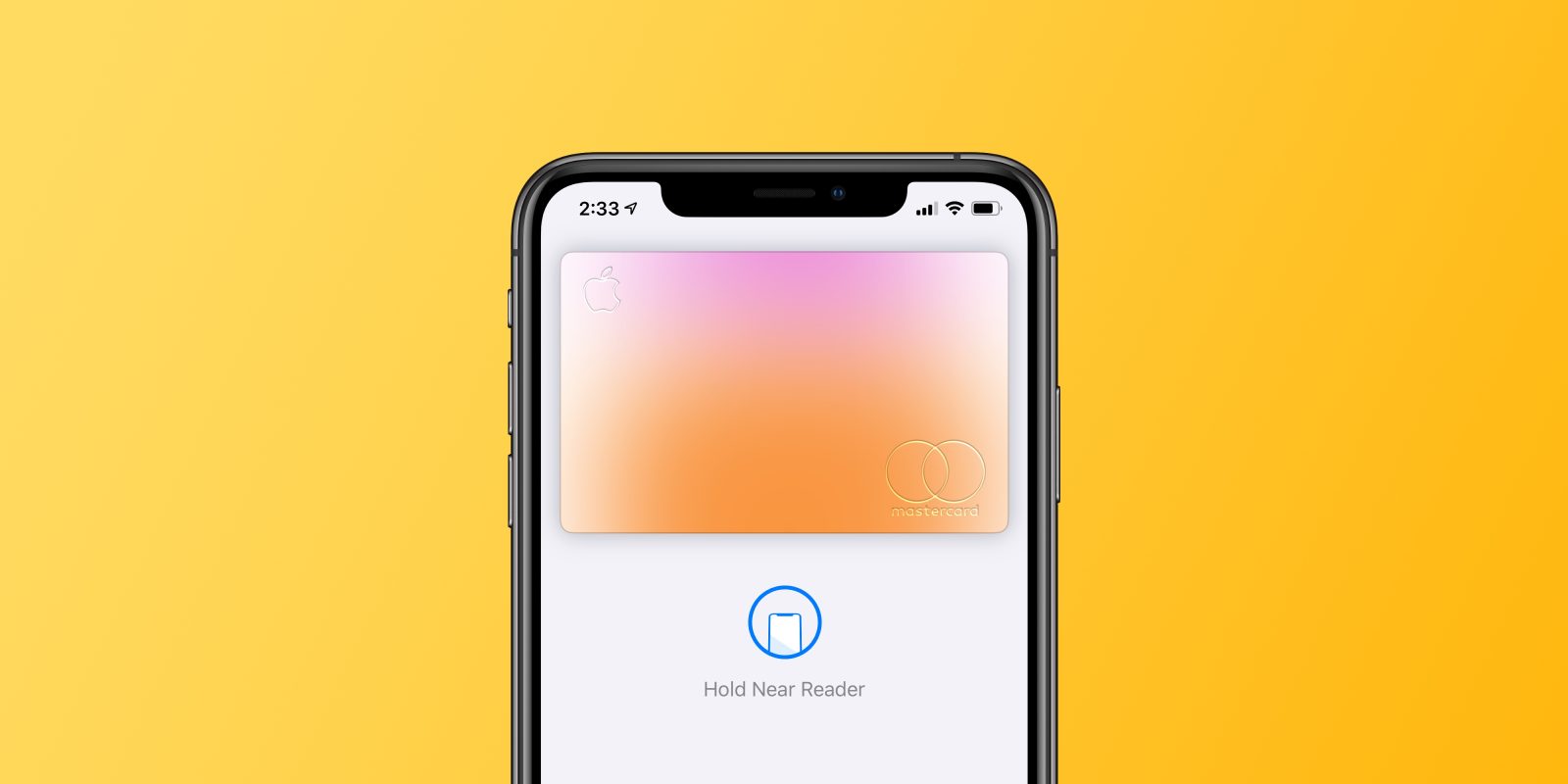 After first being announced in March, Apple Card is now available to early testers. I was among the early group of testers invited to try Apple Card today, and here are some observations after application and approval, using it with the Wallet app and more.

As we detailed this morning, Apple Card is in the early stages of rolling out to users. The rollout appears to be moving at a modest pace. I received an email from Apple titled “You’re invited to get Apple Card starting today” earlier this afternoon.

The email from Apple touts that people joining today are getting “early access” before it’s made public:

You wanted to be one of the first to get Apple Card — a new kind of credit card created by Apple, not a bank. And starting today, we’re giving you early access so you can help us get ready for the public launch. Which means you’ll experience Apple Card before everybody else.

Some users have reported success by going into the Wallet app and tapping the “+” icon in the upper-right corner. Then, tap the Apple Card option and you might be able to apply. This didn’t work for me until I had received the invite email, though. 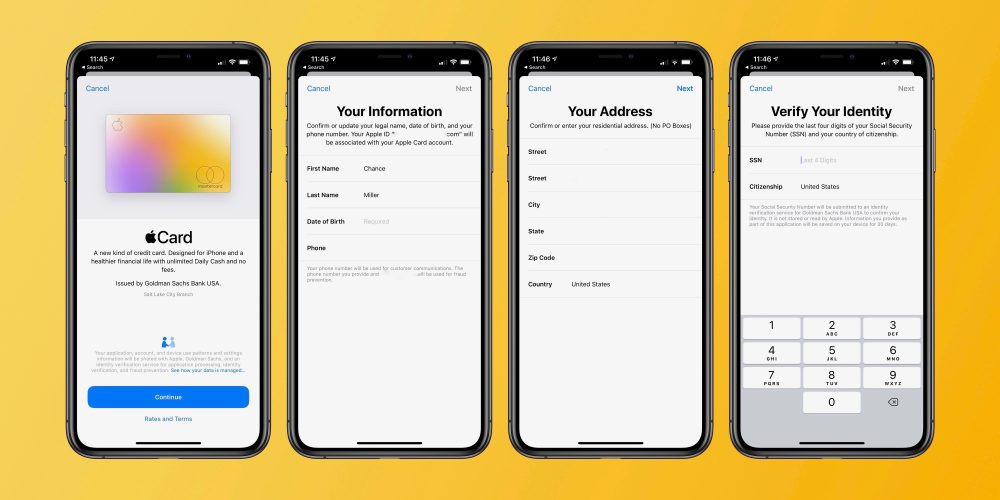 The application process for Apple Card is incredibly straightforward. Once you’re invited to apply, you can do so directly in the Wallet app on iPhone. Much of your information will be pre-filled based on your Apple ID. For me, I only had to enter my date of birth and the last four digits of my social security number.

Details like my address, phone number, and name were pre-filled based on my Apple ID information. I did have to enter my annual income, though.

Once you enter all of your details, you’ll be presented with the Apple Card Terms and Conditions. Once you agree, your application is submitted to Goldman Sachs for approval.

After your approval, you can request to have your physical titanium Apple Card delivered, with Apple saying it should come within 6-8 business days. 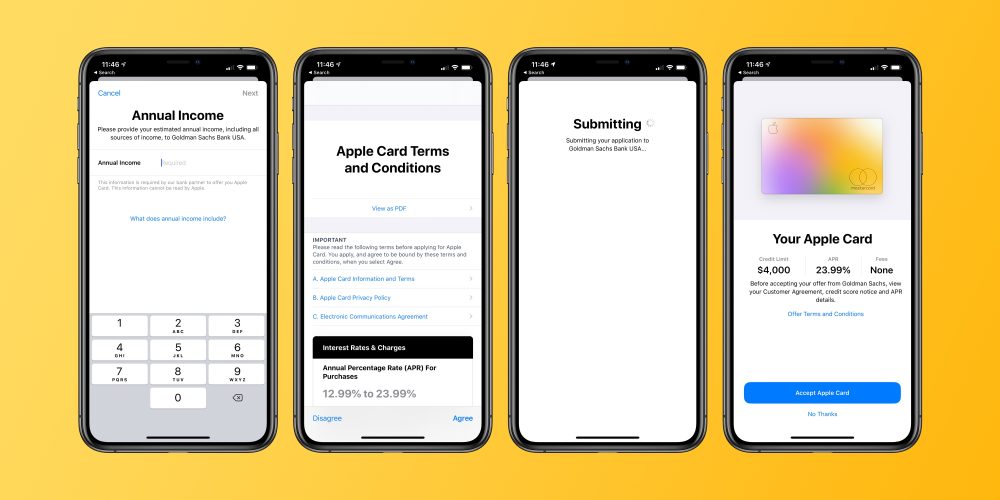 Once I tapped through to agree, I was approved for Apple Card within 30 seconds. Apple presents a clear interface telling you your credit limit, interest rate, and fees (“None”). You can review that information, view terms and conditions, and either accept or decline the card.

Apple Card is only available to a small subset of users at this point, so it’s hard to tell what range of credit Goldman Sachs is approving. Goldman Sachs checks TransUnion credit reports, though there’s no indication that they performed a hard credit check (at least at this point).

Interest rates for Apple Card range from 12.99 percent to 23.99 percent. That base rate is slightly lower than what Apple and Goldman Sachs had originally said due to recent interest rate cuts by the Federal Reserve.

I was approved with a $4,000 credit limit with an interest rate at the top-end of the spectrum. I was a bit surprised by the interest rate, but it’s a non-issue so long as you don’t carry a balance. For comparison’s sake, my Discover interest rate is lower, but with a similar line of credit.

As more people with varying credit backgrounds apply to Apple Card, we’ll likely learn more about approval odds and factors. At this point, though, we’re pretty much flying blind. 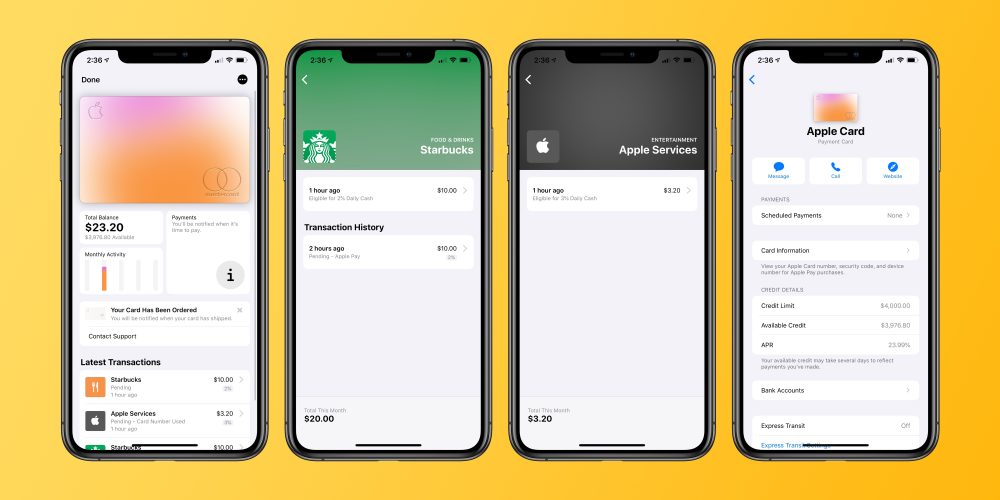 Everything you’ll need to do with Apple Card is managed through the Wallet app on iPhone. This has several benefits because it means everything is done at a system level. Details are closely aligned with your Apple ID, and there’s no need to log-in to a separate app every time you need to check your Apple Card.

The virtual card design of Apple Card is a neat, responsive heat map based on the different categories in which you’ve spent money. Thus far, I’ve used Apple Card for Starbucks and App Store purchases, so my card is a mix of pink and orange.

For payments, Apple Card will let you pay your full balance, your statement balance, or any other amount. It will also show you detailed information about the interest fees associated with each payment option. You can also schedule autopay to coincide with paydays.

Tapping the three dots in the upper-right corner of the Apple Card interface in Wallet lets you quickly contact support through Apple Business Chat, on the web, or via phone. You can also manage your scheduled payments here. If you already have a bank account linked to Apple Pay Cash, you can use that same one for Apple Card without having to reenter the information.

Also here you can view your credit details, as well as card information like your card number, expiration, and security code. You can also request a new card number if you think yours might have been compromised. 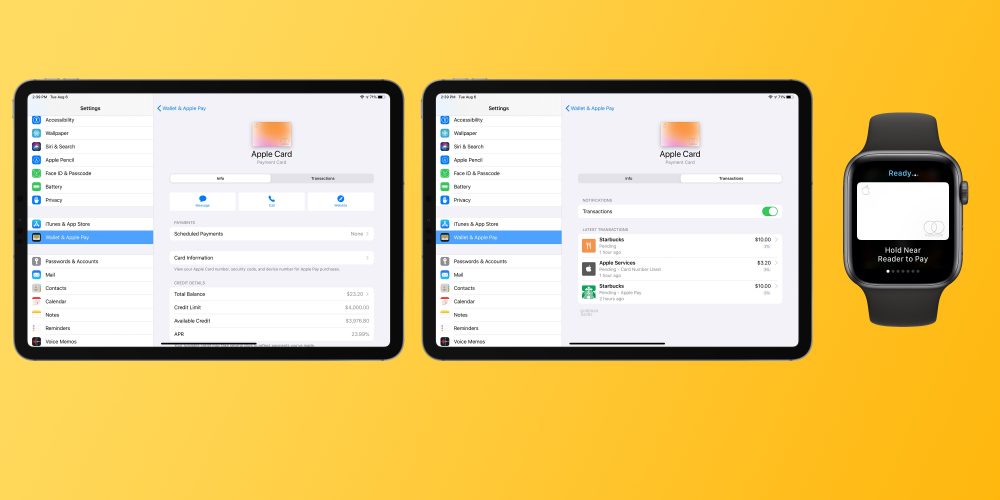 The iPad, of course, features no Wallet app. Instead, all Apple Card details are housed in the “Wallet and Apple Pay” section of the Settings app. This makes for a messy experience overall, and whether or not a dedicated app for Apple Card might come to the iPad later down the line remains to be seen.

On Apple Watch, Apple Card is accessible like any other Apple Card by double-pressing the side button. Theoretically, the card here should match the heat map associated with your card, but for me it’s stuck to plain white, despite my purchases.

While you might find better cashback options than Apple Card, Apple’s implementation is by far the easiest to use. You earn 3 percent on Apple purchases, 2 percent on Apple Pay purchases, and 1 percent on any purchases made with the physical card. In the transactions list in the Wallet app, you’ll clearly see what each purchase earned you in cashback.

This means that anything billed through Apple, including Apple TV Channels, App Store and iTunes purchases, AppleCare, Apple Music, and in-app subscriptions, is eligible for 3 percent back. This also includes forthcoming services like Apple TV+ and Apple Arcade. The moral of the story here is that you likely won’t find much better than 3 percent for those recurring subscriptions.

Because Apple Card runs on the MasterCard network, you also get access to those benefits as well, including things like MasterCard travel deals, special events, and more. Once the card is more widely available, you’ll be able to view all of those benefits here.

Apple Card cashback is delivered daily through what Apple calls “Daily Cash.” At the end of every day, you’ll receive an Apple Pay Cash credit for your rewards for the day. You can either spend this money using Apple Pay Cash or transfer it to your bank This is far better and more intuitive than other card companies, which often credit cashback once a billing cycle.

The physical Apple Card does not display your card number, so you’ll have to go to the Wallet app to view that information. For online purchases where Apple Pay is not accepted, your Apple Card number is automatically added to Safari to easily complete the transaction.

As TechCrunch details, it’s a “semi-permanent” card number. This means you use the same number until you have an issue. When you do, you can easily request a new number via the Wallet app. There’s no support for per-transaction card numbers at this point.

Apple Card has no fees, including foreign transaction fees, annual fees, balance transfer fees, and more. For many people, this should be a factor when rewards shopping, as many cards with more lucrative rewards might have a steep annual fee.

Apple Card is certainly an interesting option in the crowded space of consumer finance. Many of the benefits are unique to Apple owners, and the tight integration throughout iOS will be hard or impossible for competitors to match.

Ideally, some of the consumer-friendly features of Apple Card, such as Daily Cash, clear transaction lists, and easy budgeting features, might also come to other card companies.

We’ll keep diving into Apple Card as time progresses and we get our hands on the physical card. We should also learn more about Apple Card approval odds in the near future.

Do you have any questions about it so far? Let us know down in the comments.