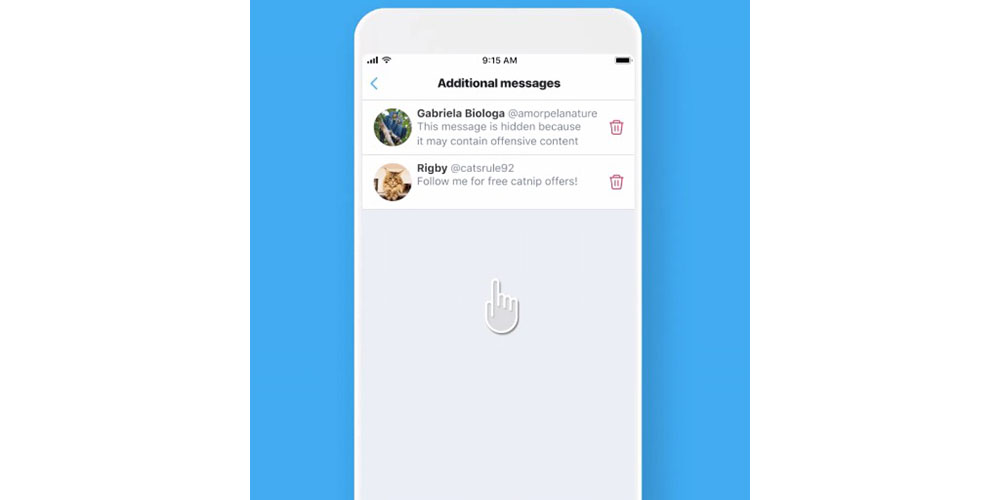 Twitter is testing a new way to hide abusive direct messages that should be particularly useful for those whose account is set to accept messages from anyone, not just those you follow.

The social network already offers one way to do this, but it’s a bit of a blunt instrument. There’s a “Quality filter” toggle in Message Settings that completely hides what it believes to be abusive messages from those you don’t follow. The new approach is more refined…

Messages from those people you don’t follow are filtered into a Message Requests tab. The new tool uses a further filter called Additional Messages. Suspected spam is dumped in here, but so too are “messages that may contain offensive content.”

Instead of seeing a preview of the message, you see the sender and warning text.

This message is hidden because it may contain offensive content.

You’ll see the message itself only if you open it. You can then choose between opening the message and deleting it unread.

Twitter posted a short video in GIF format, showing how it works.

Unwanted messages aren’t fun. So we’re testing a filter in your DM requests to keep those out of sight, out of mind. pic.twitter.com/Sg5idjdeVv

For many women, Twitter is a platform where violence and abuse against them flourishes, often with little accountability. As a company, Twitter is failing in its responsibility to respect women’s rights online by inadequately investigating and responding to reports of violence and abuse in a transparent manner.

At a watershed moment when women around the world are using their collective power to speak out and amplify their voices through social media platforms, Twitter’s failure to adequately respect human rights and effectively tackle violence and abuse on the platform means that instead of women using their voices ‘to impact the world’, many women are instead being pushed backwards to a culture of silence.

A #WomenBoycottTwitter campaign in 2017 saw the social network roll out a number of new measures designed to tackle the problem.

Testing a new way to hide abusive direct messages comes in the same week that Twitter teased new features for iOS, including support for Live Photos.