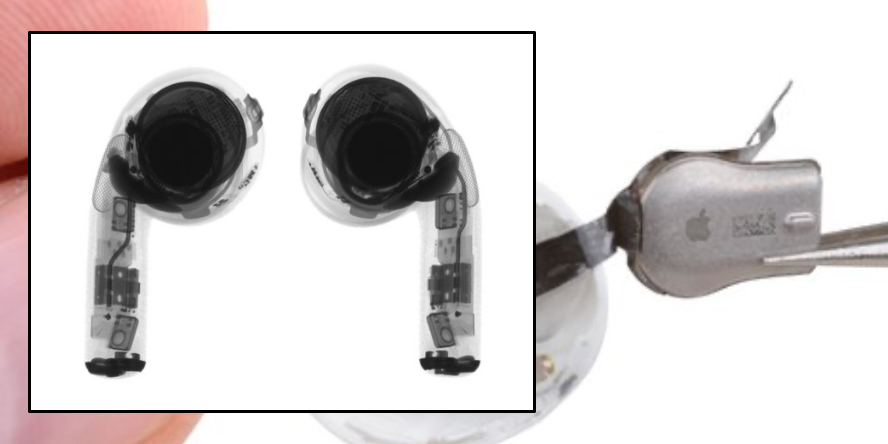 With the AirPods Pro now available, iFixit has got its hands on a pair and done its usual teardown of Apple’s latest hardware.

Interestingly, rather than the skinny-but-long battery in normal AirPods, the AirPods Pro use a button cell. iFixit could not determine the exact capacity of the buds, but it could see the capacity of the AirPods Pro case. The case battery has increased significantly from 1.52 Wh to 1.98 Wh. Apple still rates the AirPods Pro for the same five hours of listening time, or 4.5 hours with active noise cancellation or transparency mode enabled.

We also get our first real look at the new system-in-package design of the AirPods Pro brain. The chips are essentially sculpted into a tiny little irregularly shaped component, which iFixit says is even smaller than the equivalent brain in the standard AirPods.

The system-in-package expertise from the Apple Watch has no doubt been useful to Apple here.

Apple does not make any claims about the product’s repairability. It is unfortunate that AirPods and now AirPods Pro are small pieces of plastic that effectively become disposable over time as the battery degrades, but as you can see from the intricacy of components here, there’s no clear route to how Apple could improve things.

iFixit speculates the design of AirPods Pro could have allowed for Apple to repair a unit by replacing most internal parts while reusing the same stems, antennas, microphones, and force sensor. It’s possible this was an early design goal that could never be fully delivered on.

It therefore comes as a surprise to no one that iFixit scores the AirPods 0/10 on the repairability scale. You can see the full teardown here.