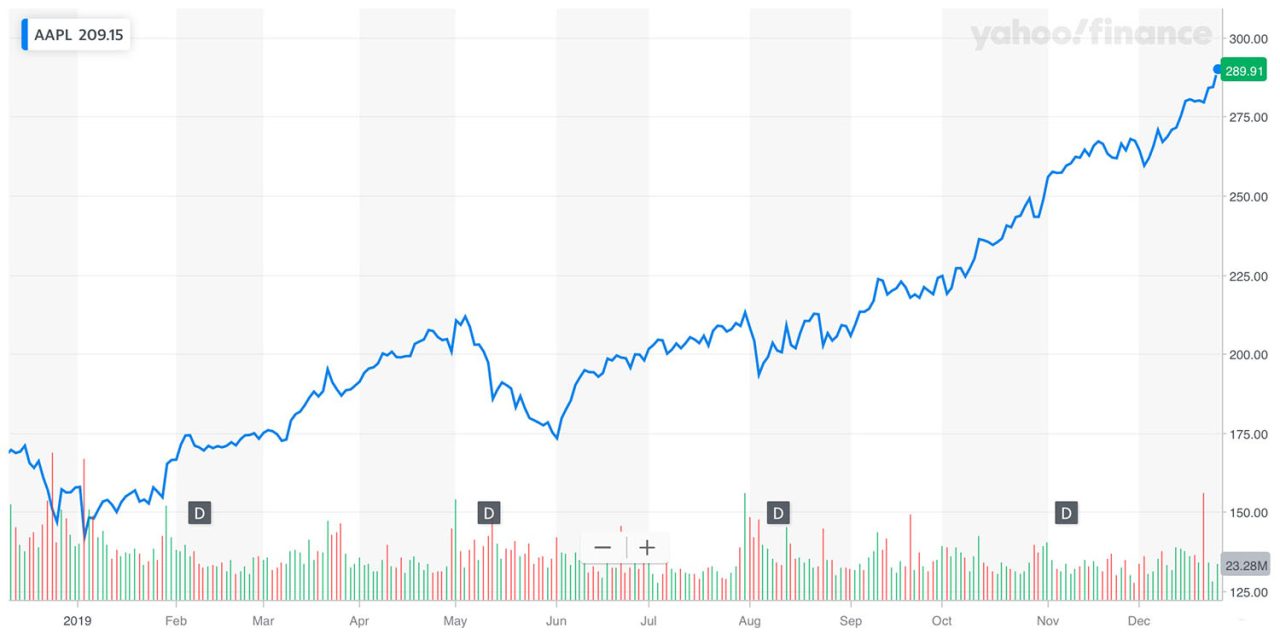 AAPL 2019 performance is the stock’s best since 2009, gaining more than 80% in value during the course of the year.

Apple made headlines when it first topped a trillion dollar valuation back in 2018. It subsequently fell below the magic number, but strong gains this year has put its current market cap at some $1.3T …

Bloomberg notes that this is AAPL’s strongest growth since 2009.

Apple Inc. shares rose on Thursday, hitting their latest in a series of record highs as the iPhone maker remained on track for its best annual performance in a decade.

The stock rose as much as 1.6% in the first U.S. trading day after Christmas, when markets were closed. Contributing to the positive tone, early reads on spending in the holiday shopping season have been strong, and Apple products — notably its AirPods and iPhone — were widely cited as “must-have” items on customer wish lists, according to an Evercore ISI survey […]

The rally has produced a gain of more than 80% this year for the largest publicly traded U.S. company and added about $530 billion in market value […]

Almost 10 years ago, Apple closed out 2009 with an annual surge of almost 150%, as stocks began recovering from the financial crisis.

The paper also put that 80% gain into perspective.

[The $530B gain] is more than the market capitalizations of all but five companies in the S&P 500 Index, and twice the market value of Intel Corp.

Admittedly the gains were helped by starting the year on a low note, Apple cutting its guidance for Q1 2019 on January 2, resulting in a significant hit to the stock price. So much so that it provoked four lawsuits. But there doesn’t seem too much to complain about AAPL 2019 performance as we approach the end of the calendar year.

There is widespread optimism about 2020, with Apple, analysts and suppliers alike seemingly expecting record iPhone sales as the company is set to launch its first 5G models – even if Wall Street appears somewhat confused about what to expect.

The average price target for Apple shares stands at about $268, which implies downside of about 7% from where it has been trading. Despite that, Wall Street remains broadly positive on Apple, with 28 firms recommending investors buy the stock. To compare, 14 firms have neutral ratings, while seven advocate selling.

Analysts expect Apple’s iPhone sales to be flat for the holiday quarter, but higher average selling price see a consensus view that revenue will be up around 4.5% and earnings up 8% plus.