Apple shares were halted this evening ahead of the market’s close. CNBC was first to report on the development. Shortly thereafter, Apple published a “Letter from Tim Cook to Apple investors” in which Cook announced a rare AAPL earnings revision for the first fiscal quarter of 2019.

This is what Apple is now forecasting:

This is the guidance Apple had previously offered back in November:

In the letter, Tim Cook outlined several reasons for this adjustment. Cook points to factors such as different timing of its iPhone launches, foreign exchange headwinds, struggles ramping new products, and economic weaknesses. Ultimately, Cook says this all resulted in “fewer iPhone upgrades than we had anticipated.”

First, we knew the different timing of our iPhone launches would affect our year-over-year compares. Our top models, iPhone XS and iPhone XS Max, shipped in Q4’18—placing the channel fill and early sales in that quarter, whereas last year iPhone X shipped in Q1’18, placing the channel fill and early sales in the December quarter. We knew this would create a difficult compare for Q1’19, and this played out broadly in line with our expectations.

Second, we knew the strong US dollar would create foreign exchange headwinds and forecasted this would reduce our revenue growth by about 200 basis points as compared to the previous year. This also played out broadly in line with our expectations.

Third, we knew we had an unprecedented number of new products to ramp during the quarter and predicted that supply constraints would gate our sales of certain products during Q1. Again, this also played out broadly in line with our expectations. Sales of Apple Watch Series 4 and iPad Pro were constrained much or all of the quarter. AirPods and MacBook Air were also constrained.

Fourth, we expected economic weakness in some emerging markets. This turned out to have a significantly greater impact than we had projected.

In addition, these and other factors resulted in fewer iPhone upgrades than we had anticipated.

Cook also points to China as a pain point for Apple’s first quarter results. Cook says that revenue in China accounts for “over 100 percent of our year-over-year worldwide revenue decline.” Cook says that the economic environment has slowed significantly in China due to trade tensions with the United States:

With all of that having been said, Cook also takes the opportunity to note that there are “many positive results in the December quarter” thus far. Cook says that revenue outside iPhone is up by almost 19 percent due to things like Apple Watch and AirPods. Apple’s wearables business is up almost 50 percent year-over-year, Cook says.

Most importantly, we are confident and excited about our pipeline of future products and services. Apple innovates like no other company on earth, and we are not taking our foot off the gas.

Cook also notes that Apple is “undertaking and accelerating” initiatives to improve its performance. One of these efforts, Cook says, is the process of trading in an old phone, financing the purchase of a new phone, and getting help in transferring data between devices:

We can’t change macroeconomic conditions, but we are undertaking and accelerating other initiatives to improve our results. One such initiative is making it simple to trade in a phone in our stores, finance the purchase over time, and get help transferring data from the current to the new phone. This is not only great for the environment, it is great for the customer, as their existing phone acts as a subsidy for their new phone, and it is great for developers, as it can help grow our installed base.

Companies are supposed to call the exchange where they are listed 10 minutes prior to announcing any news that could significantly affect the stock. That is what Apple seemingly did here, halting trading prior to making this announcement.

Trading of AAPL has since resumed. The stock is down nearly 8 percent in after-hours trading, falling to around $145 per share. Shares of Apple suppliers are also down, as reported by Reuters. 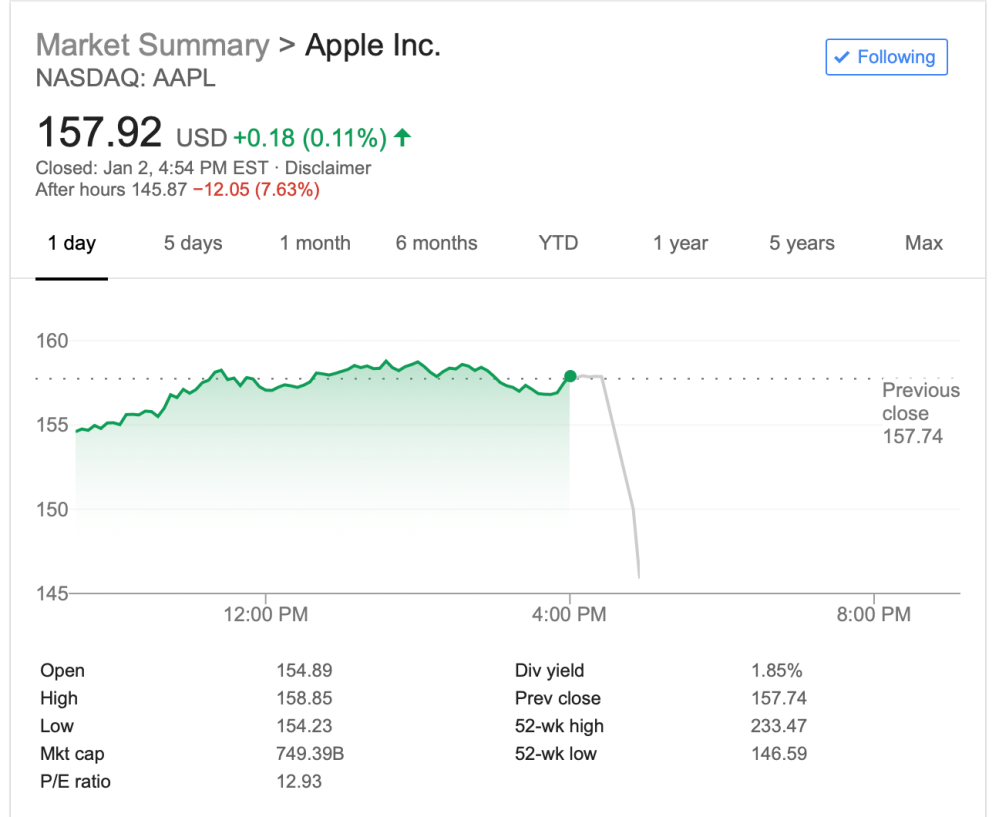