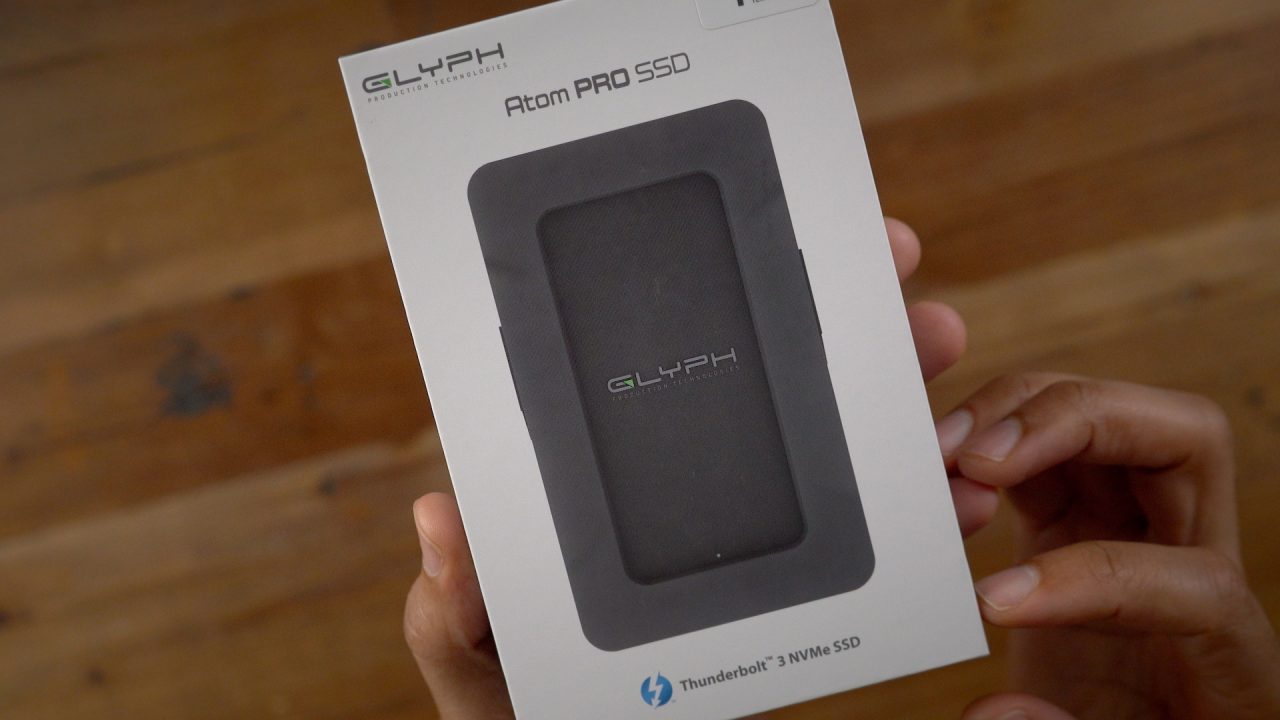 First and foremost, let’s take a gander at the specs found on the Glyph Atom Pro SSD. Glyph makes the Atom Pro in 500GB, 1TB (the version I’m testing), and 2TB varieties.

Glyph has always made exceptionally-built products, and the Atom Pro SSD is no exception. Featuring a dark black aluminum chassis, the Atom Pro feels solid to the touch, like it could hold up well from a fall out of a second-floor window.

The overall design of the Atom Pro SSD is quite understated. A simple slab of black aluminum, about the height and width of a deck of playing cards, is what you get in the Glyph Atom Pro. 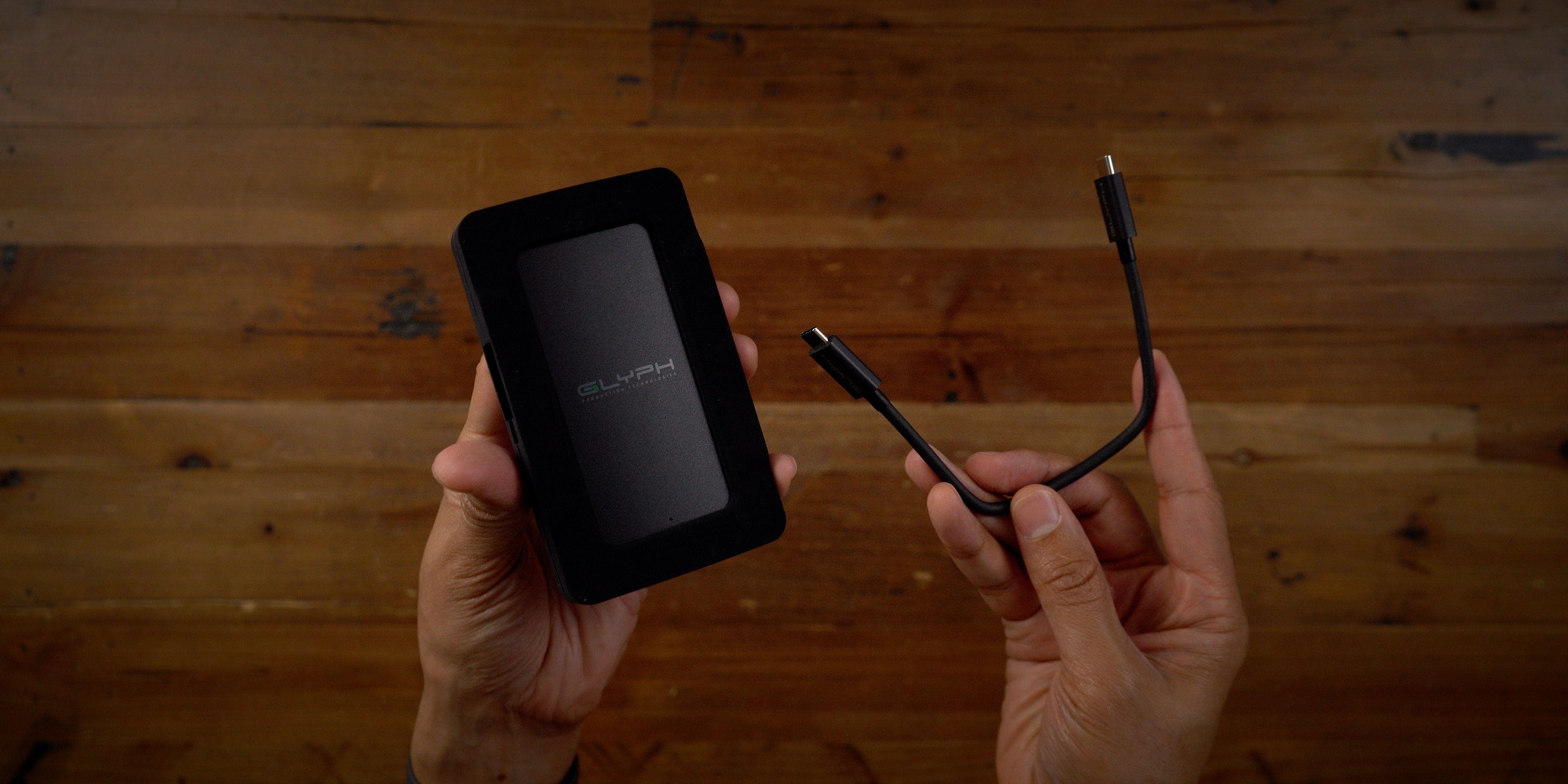 Thickness-wise, it’s considerably smaller than a deck of cards, measuring just .75-inches in depth. Keep in mind that these measurements are all sans the optional rubber bumper that comes preinstalled on the unit’s exterior.

The bumper adds considerable size to the Atom Pro SSD but also lends additional protection against bumps and drops. Although I’ve never been a fan of rubber bumpers, the Glyph Atom Pro’s bumper contains a handy little secret with its ability to house an included Thunderbolt 3 cable for easy portability. 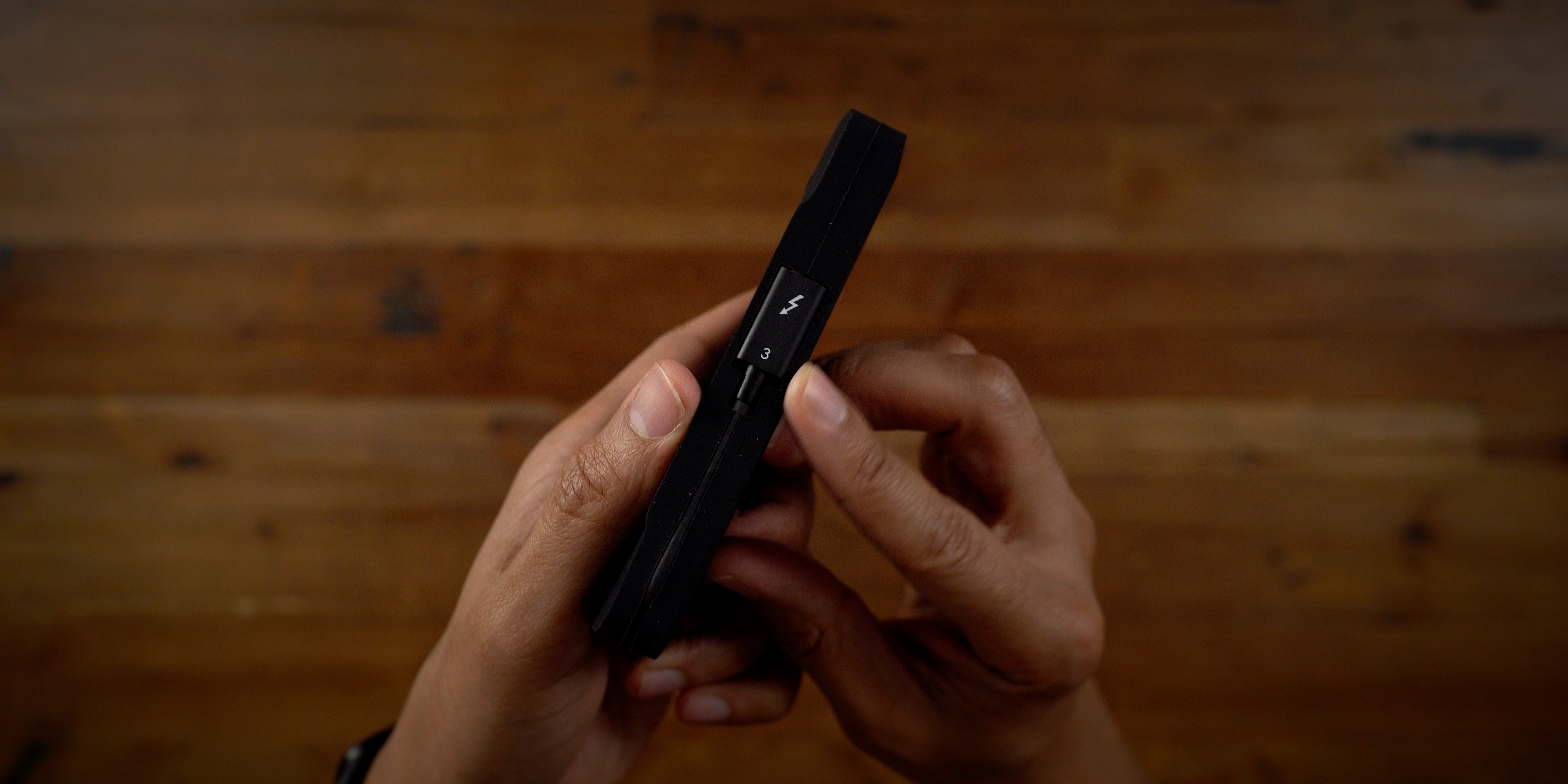 The Thunderbolt 3 cable, while quite short at only 10-inches, is made that way purposely so that it can tuck away inside the bumper. When you pull on each side of the bumper, the cable ejects from storage so that you can easily connect it to the SSD. 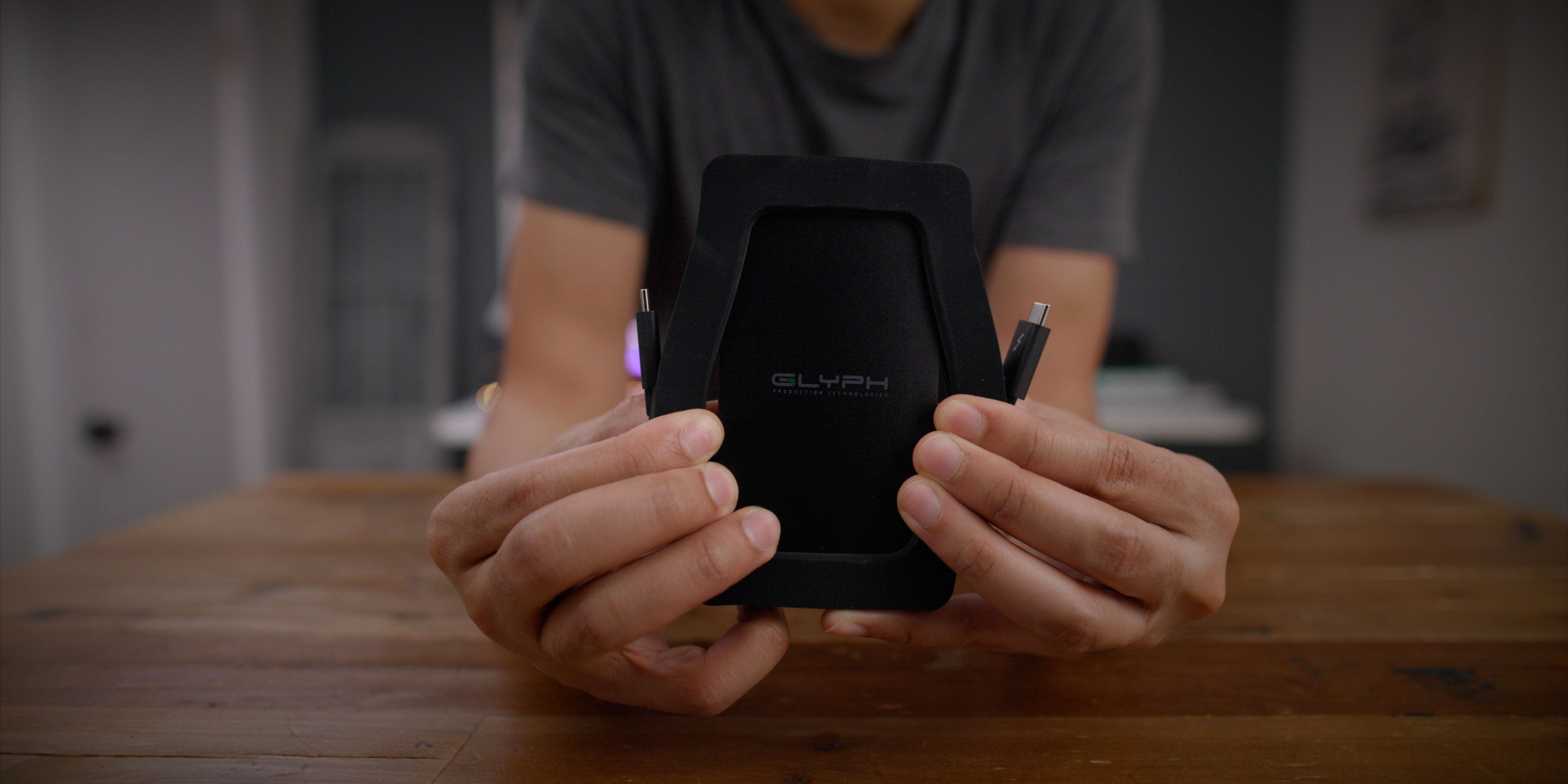 On top of the Glyph Atom you’ll find subtle branding, along with a tiny green LED to represent connectivity and data transfer. On the bottom of the SSD are two rubber strips at each end to help keep the drive firmly planted on a desktop surface when the bumper is not in use. 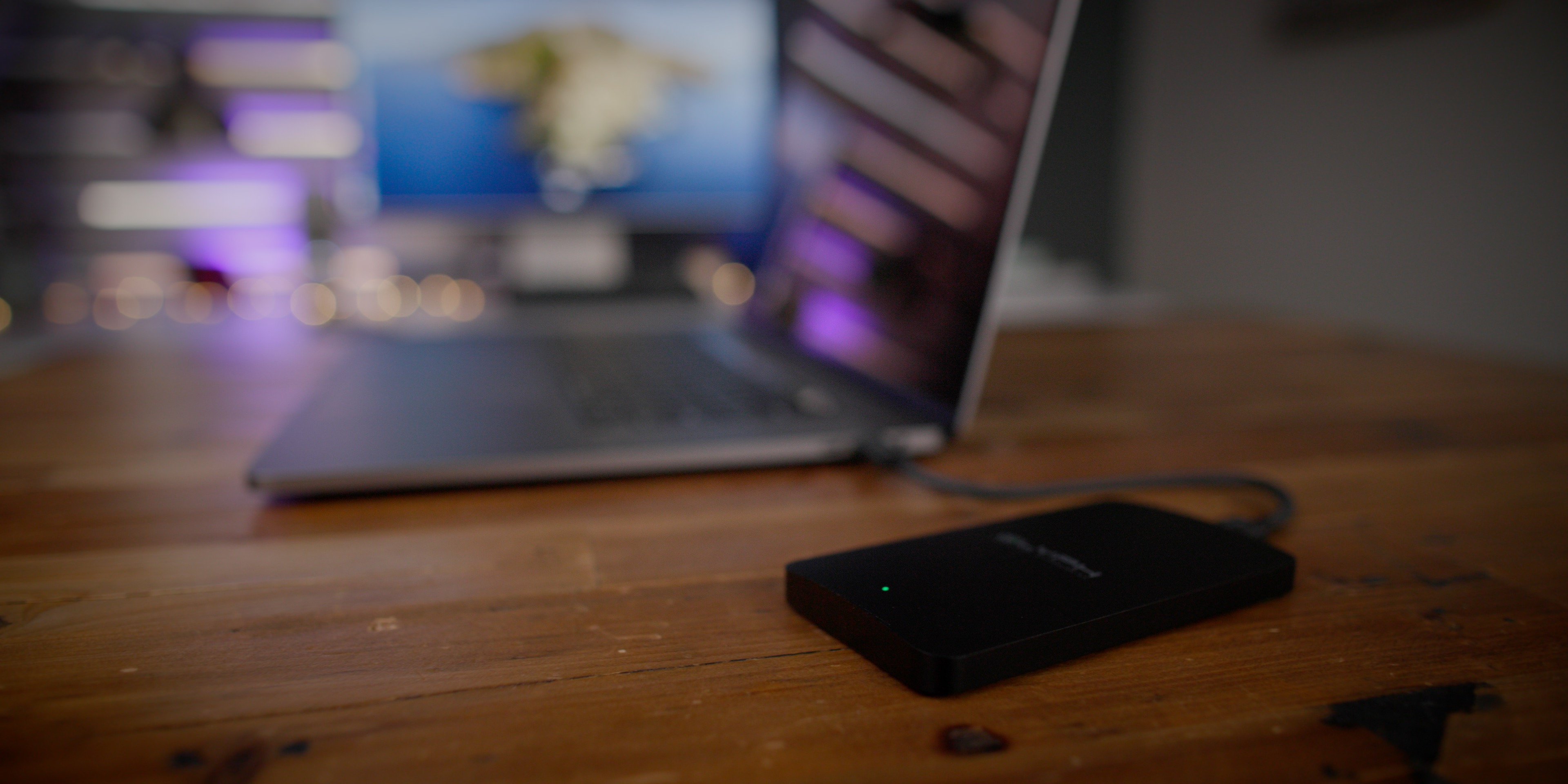 Overall the Glyph Atom Pro SSD’s build quality is excellent, but the unit might be a bit larger than desired if you’re used to super small SATA-powered SSDs like the SanDisk Extreme Portable SSD or the Samsung T5 or T7 Touch SSD. The Glyph Atom Pro is much closer to the Samsung X5 as far as weight and footprint is concerned.

Speaking of the Samsung X5 SSD, we reviewed it late last year and found that while it was incredibly fast upfront, the device tended to introduce throttling during prolonged file transfers. 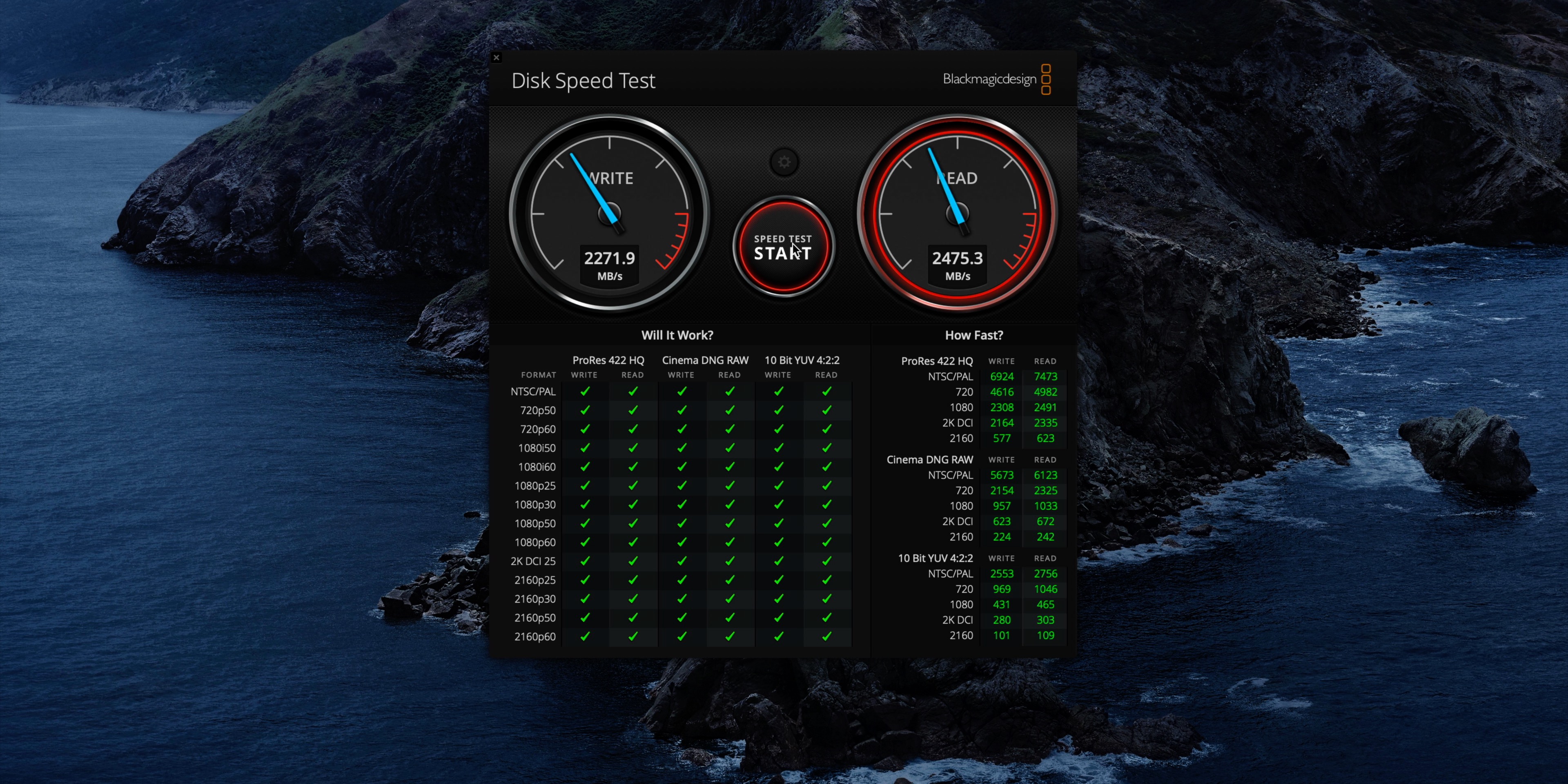 The Glyph Atom Pro SSD posts read speeds that are in the same ballpark as the Samsung X5, saturating Thunderbolt 3 bandwidth, but performs better over sustained read/write exercises.

Even after performing speed tests over and over, the unit maintained its consistency. For example, when transferring a 100+ GB file to my Mac’s SSD, the transfer speed stayed the same throughout the entirety of the file transfer. 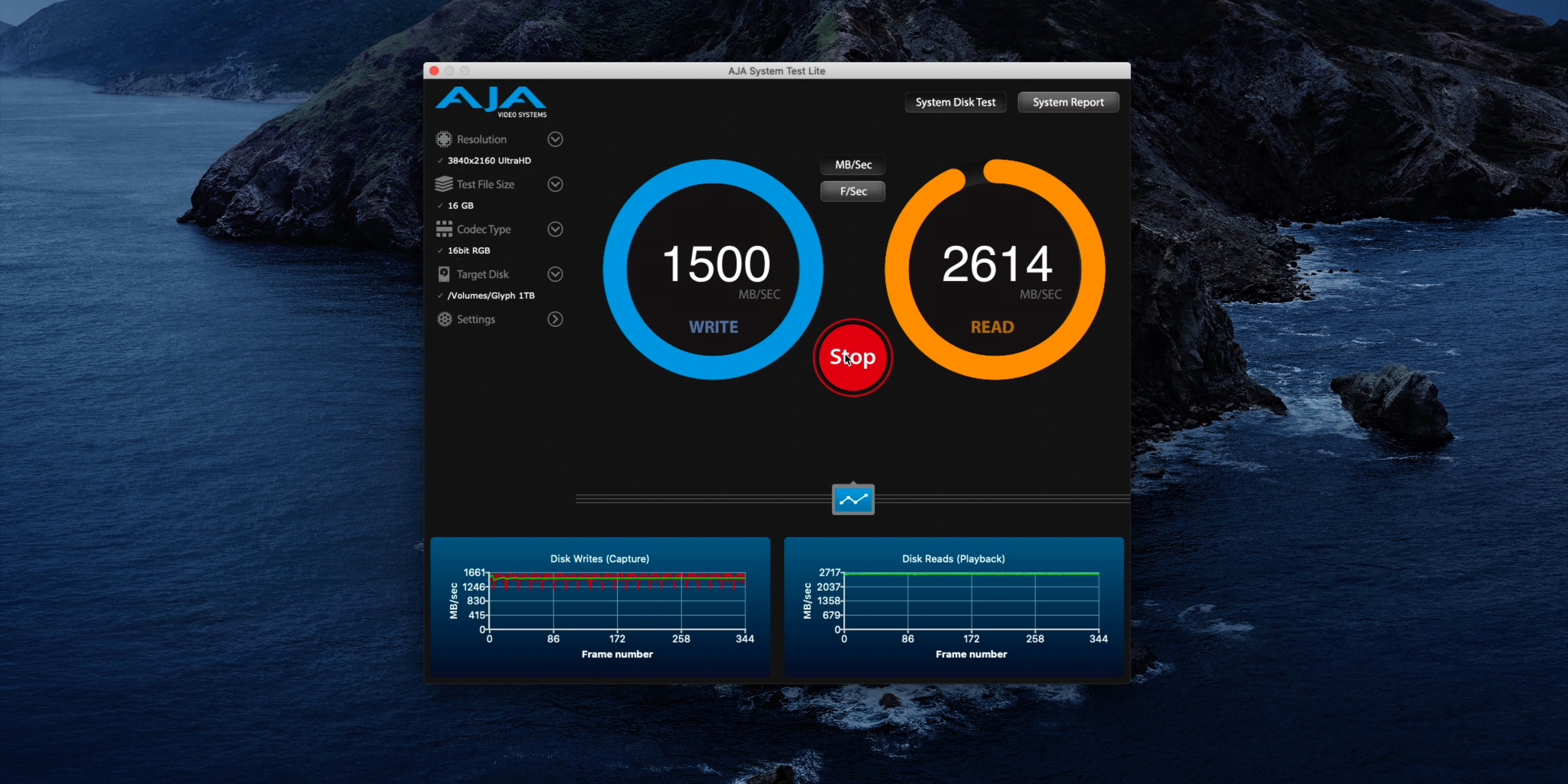 Like other drives in its repertoire, heat doesn’t seem to be a problem at all for the Glyph Atom Pro, as the unit stayed cool to the touch even when pushed. Although the drive uses a passive cooling system, the outer casing is all metal, and basically one giant heat sink for the speedy WD Black M.2 blade inside.

If you’re a creative professional that needs lots of extremely fast external storage on a drive that’s been designed to stand up to abuse, then the Glyph Atom Pro SSD is just what the doctor ordered. 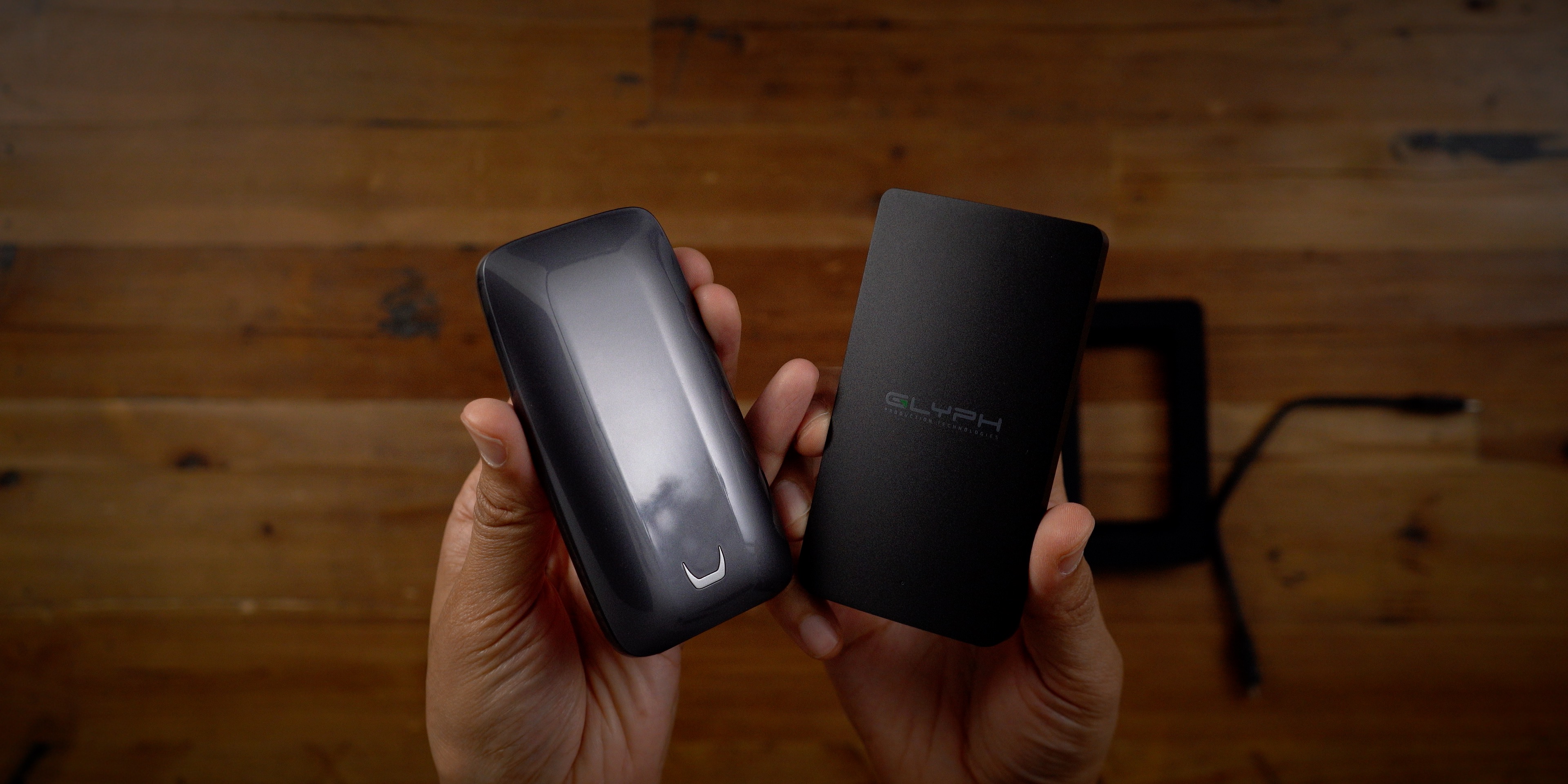 I also enjoy using the Glyph Atom Pro when editing videos in Final Cut Pro X across multiple machines. I can simply store a library directly on the portable SSD and move between my Mac Pro and MacBook Pro whenever necessary. 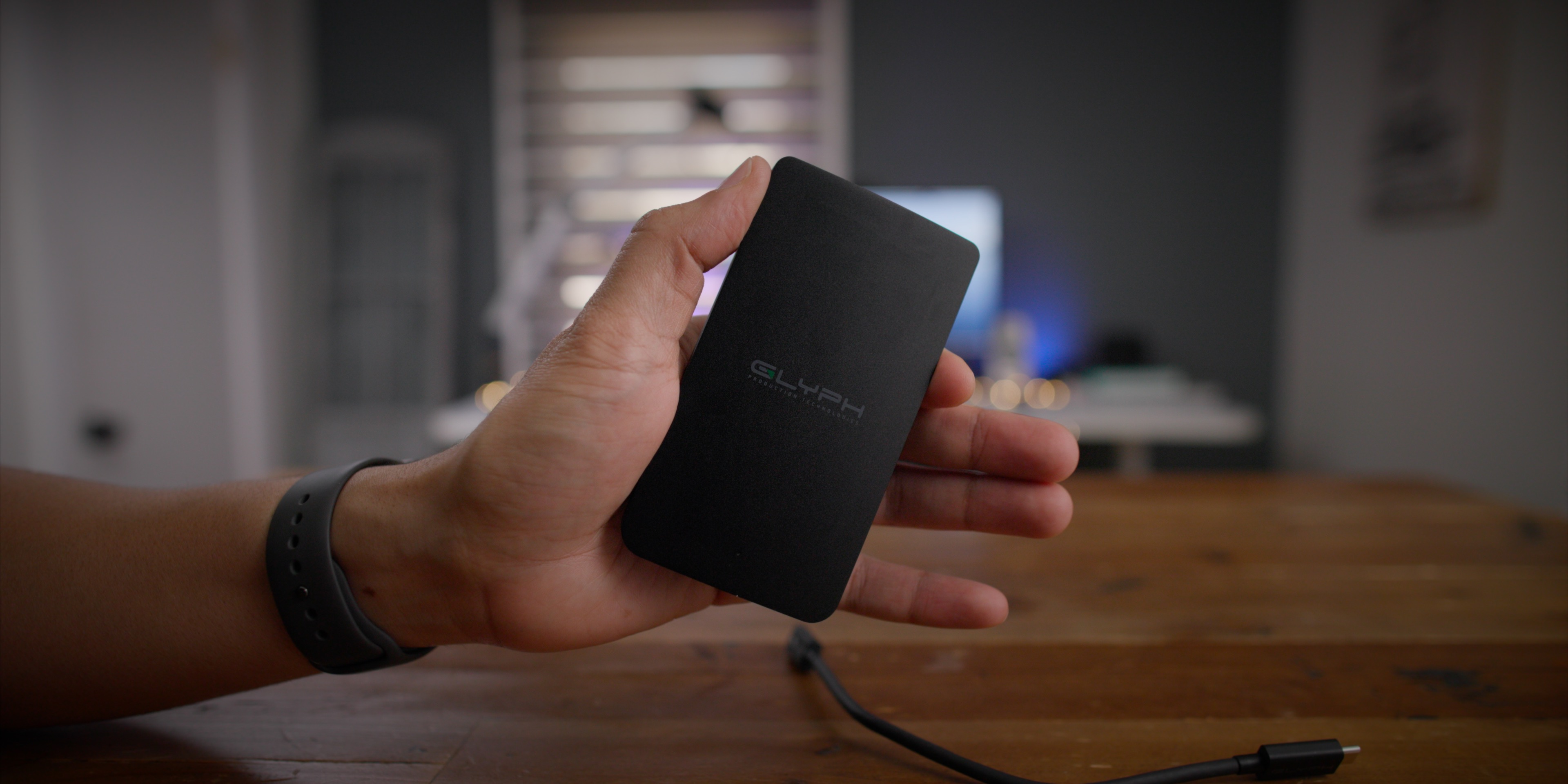 Admittedly that’s a lot of coin for an SSD, but some users need more speed than what cheaper USB 3.2 Gen 2 drives like the Samsung T5 or Samsung T7 Touch can offer. For most users editing 1080p and 4K video for YouTube, I think 10Gbps USB drives, like the Samsung units I mentioned, will do the job well. 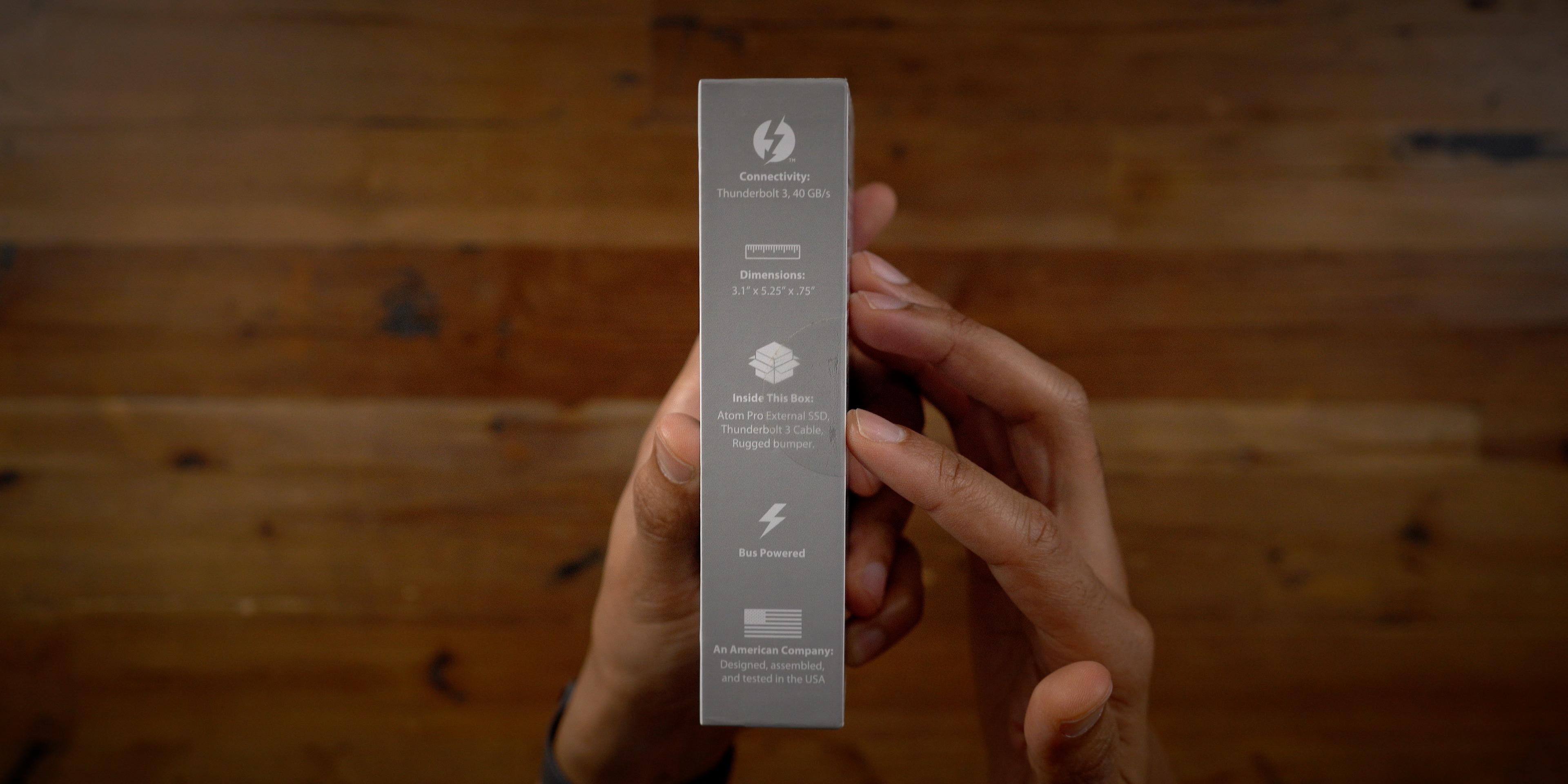 Just keep in mind that there are major build quality differences between the Atom Pro SSD and lesser drives. The Atom Pro features a rock-solid metal exterior and is MIL-Standard 810F rated for shock, vibration, dust, and sand resistance. If you’re working in tough environments, it may be well worth considering opting for a similarly robust external drive solution.

What do you think about the Glyph Atom Pro SSD? Sound off down below in the comments with your thoughts and opinions.