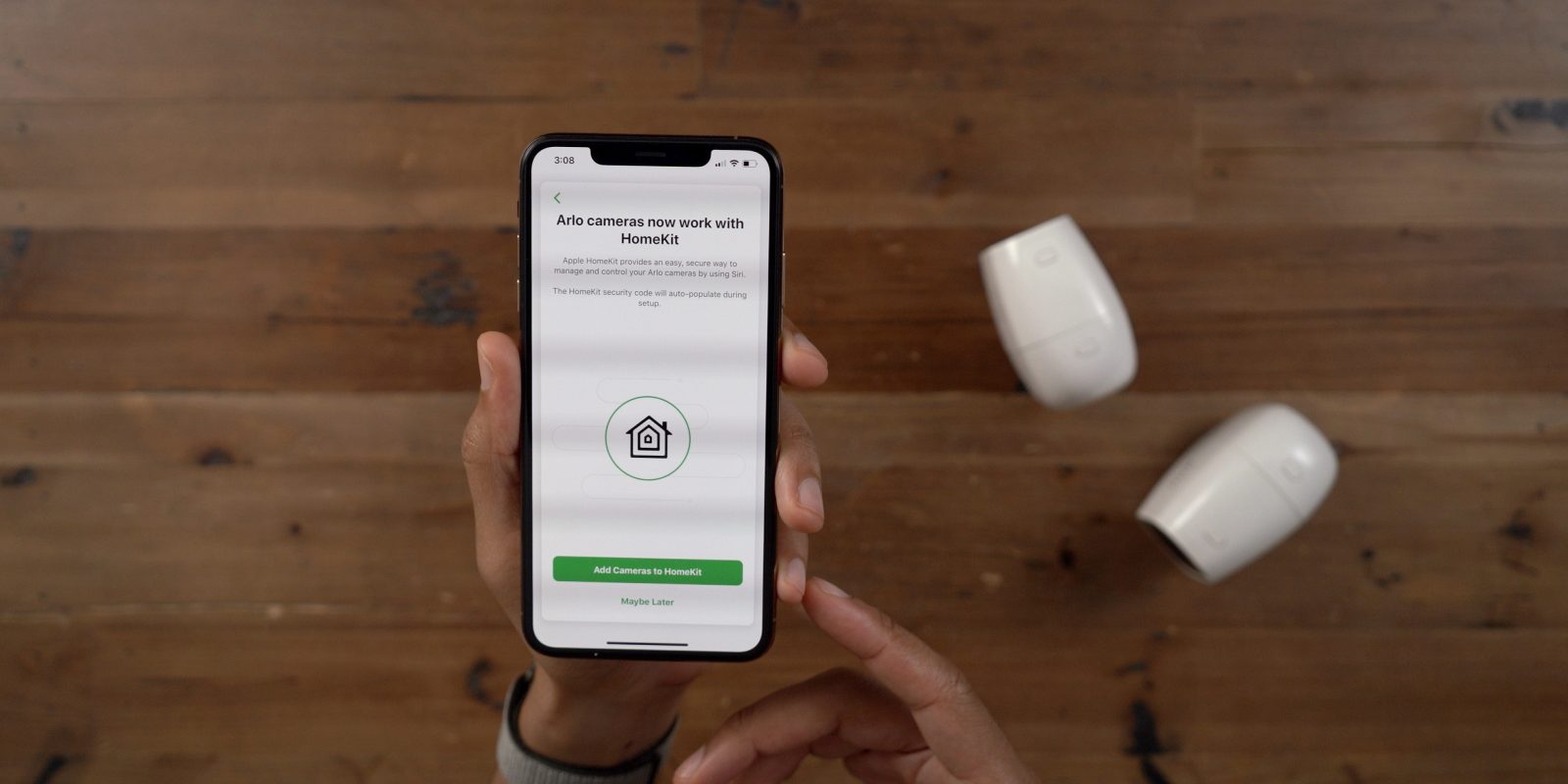 On Monday Arlo released its version 2.7.13 update to add HomeKit support to its security cameras. Needless to say, this is a highly-anticipated feature that Arlo users within the iOS ecosystem have been waiting on for quite some time. Was it worth the wait? Watch our hands-on video walkthrough for the details.

Update 2/19: Arlo has added HomeKit support for the newest member of the Arlo outdoor camera family, the Arlo Pro 3, according to Apple Insider. The other two cameras that have received HomeKit support, the Arlo Pro 2 and Arlo Ultra 4K camera, were updated last year. Although the Arlo Pro 3 lacks 4K video support like the Ultra version, it’s less expensive and still comes with the built-in spotlight, which is arguably the more useful feature.

To update your Arlo Pro 3, you can follow the same steps as outlined in the post below. Ensure that you’re running the latest version of the Arlo app, and you’ll be able to add your Arlo Pro 3 to HomeKit for viewing your camera within the Home app.

The 2.7.13 update includes full support for HomeKit, including the ability to add your Arlo cameras directly to the Home app, view cameras within the Home app, set up motion detection triggers with other HomeKit-enabled devices, quickly view scenes via interactive notifications, and ask Siri to stream a particular camera live.

Unfortunately, the update only applies to users with Base Station model numbers starting with VMB4000 and VMB4500. In other words, Arlo Pro and Arlo Pro 2 users will gain the new functionality, but Arlo Ultra users will have to continue to be patient as they await HomeKit support.

Because I have an Arlo Ultra (full review) camera on my network, I disconnected the old VMB4000 Base Station because it became redundant once I hooked up the new VMB5000 Base Station required for the newer 4K-capable security camera. The VMB5000 includes backwards compatibility with older Arlo Pro and Arlo Pro 2 hardware, so I felt it was unnecessary to keep the old hub connected. 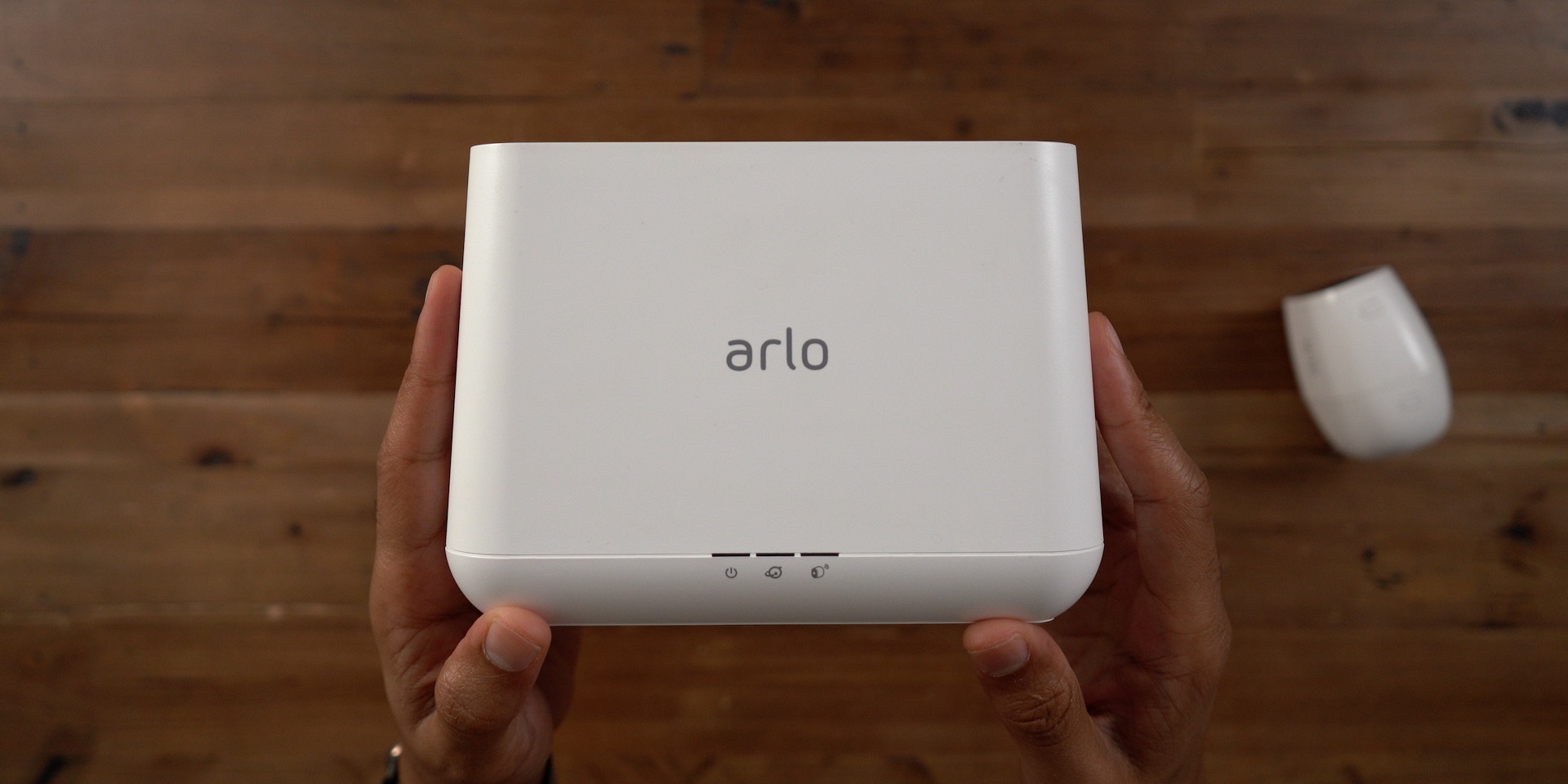 The Arlo VMB4000 Base Station

Obviously, my tune quickly changed once I realized that HomeKit support was here, but remained relegated to the older Base Station hardware. As such, I decided to reconnect the VMB4000, and simply connect all of the Arlo Pro 2 cameras I had on my network to it, leaving the new VMB5000 with its lone Arlo Ultra connected. 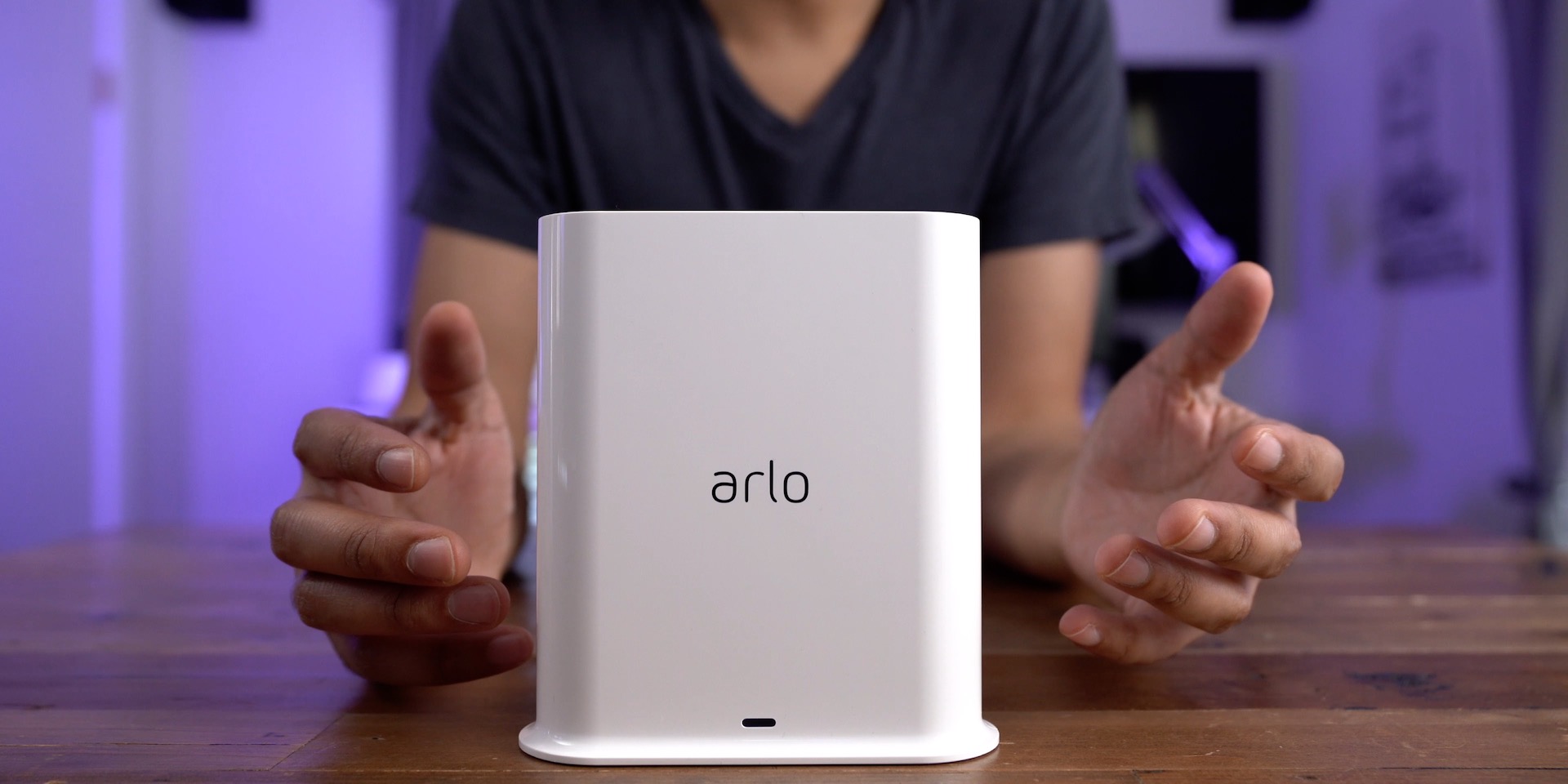 Outside of the inconvenience of having to have an additional hub connected to my network, such a setup didn’t make much of a difference in usability. Once Arlo adds support for HomeKit to its newest Base Station, I’ll probably go back to my single setup and put the older VMB4000 back in storage. 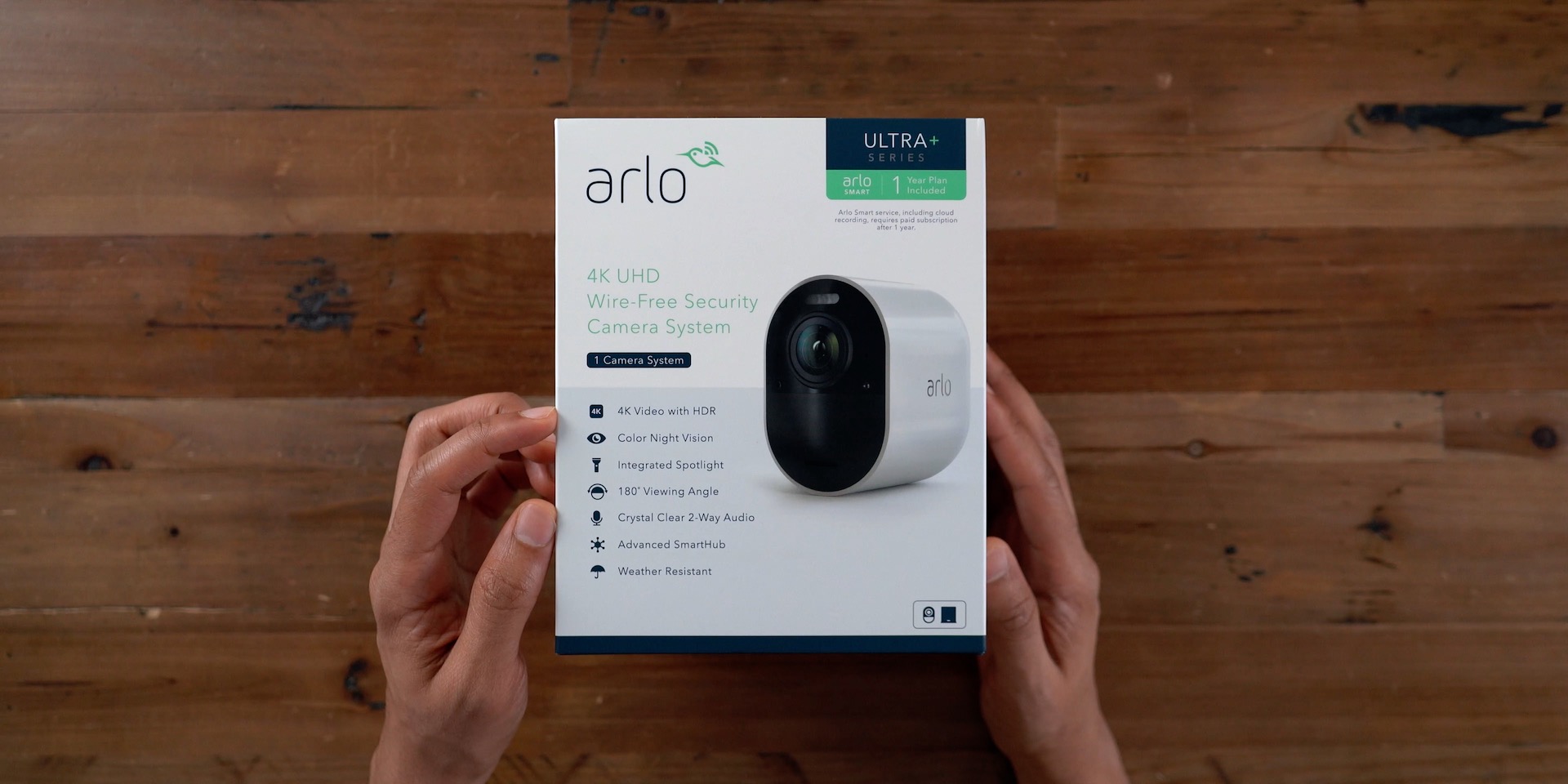 Setting up HomeKit support for the Arlo cameras is all done within the Arlo app, so you don’t have to visit the Home app to add the hub, enter any passcodes, etc. I found that adding HomeKit support was a little finicky, but once I got going it was smooth sailing.

Once the update is installed, you’ll see a pop-up within the Arlo app stating that Arlo cameras now work with HomeKit. You can also venture into the hub settings to access a new HomeKit panel specifically geared towards establishing a HomeKit connection. 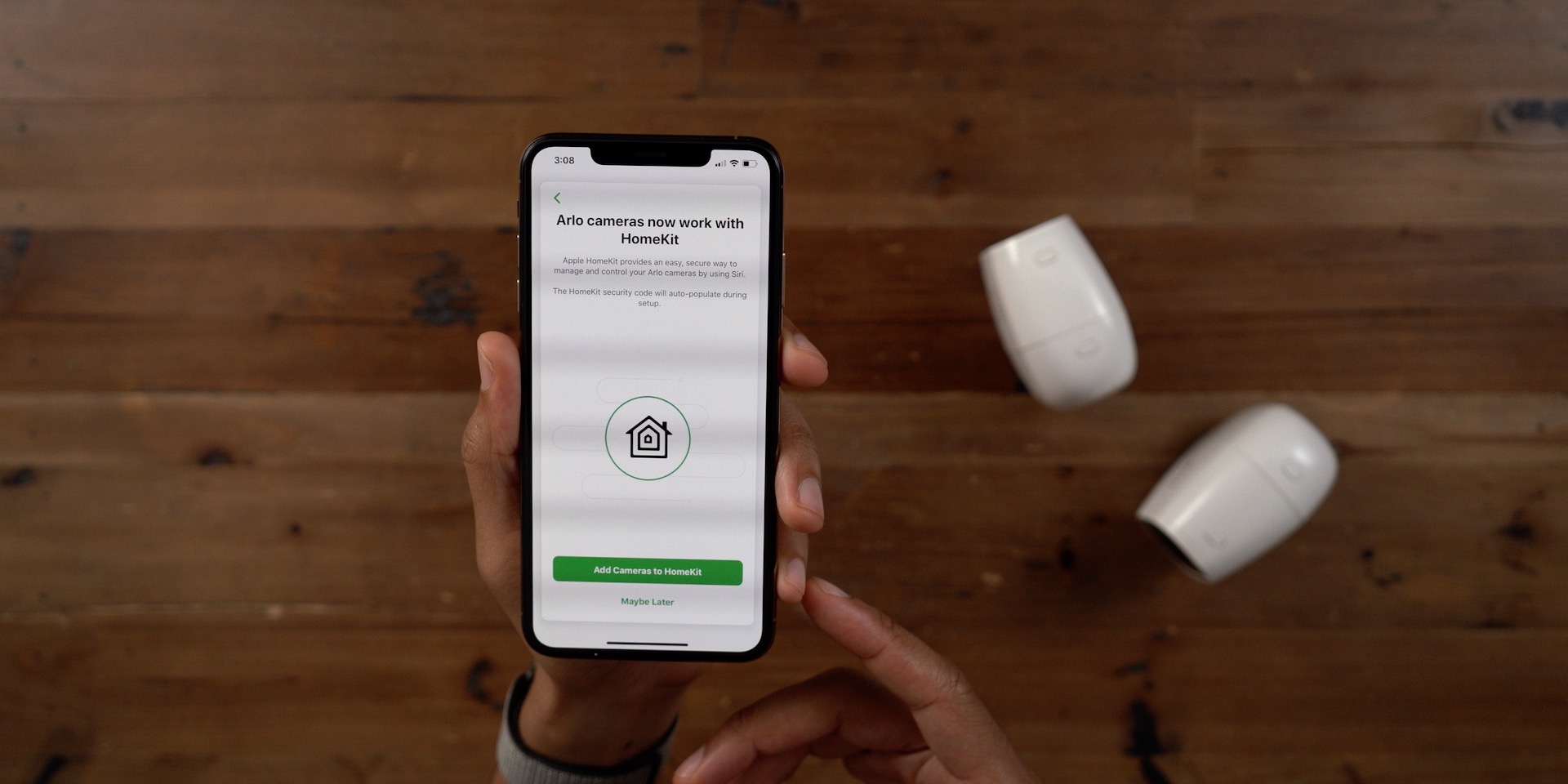 Prior to the HomeKit set up process, you’ll be asked to lend access to your Home data, which is necessary to get the ball rolling. The app will then walk you through the entire process of adding cameras to HomeKit. 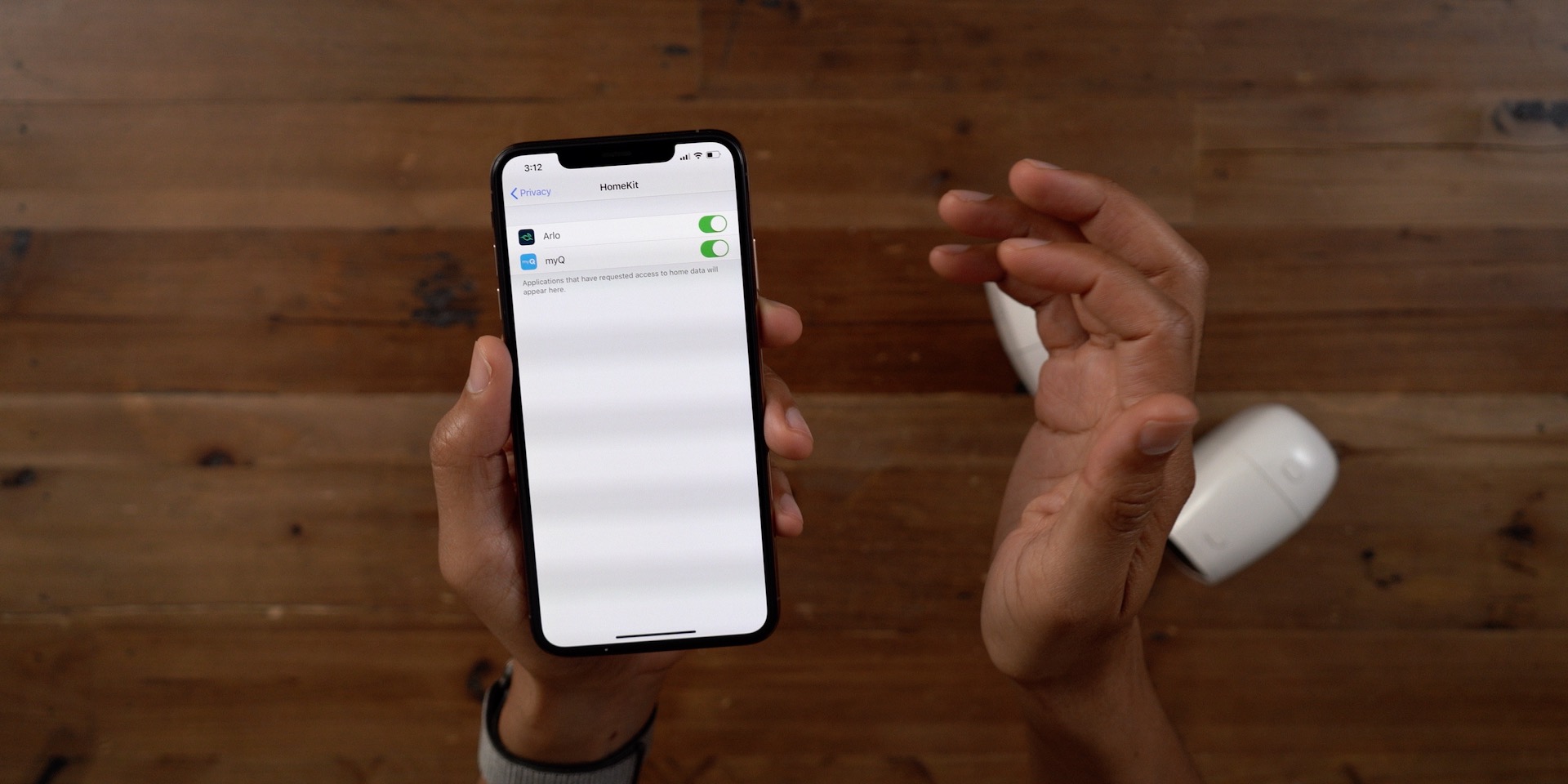 After tapping the Add Cameras to HomeKit button, the app will search your network for a compatible base station. After tapping on the base station, the app will have you select a Home, followed by the room that you’d like to add your cameras to. These rooms are imported from your pre-existing HomeKit settings, so it’s very straightforward even though the set up occurs “outside” of the Home app.

Once a room is selected, you’ll see a popup requesting to allow the Arlo App to add the Bridge (Arlo Base Station) to your Home. Once you tap Continue, the base station will be added to your home as a HomeKit hub. 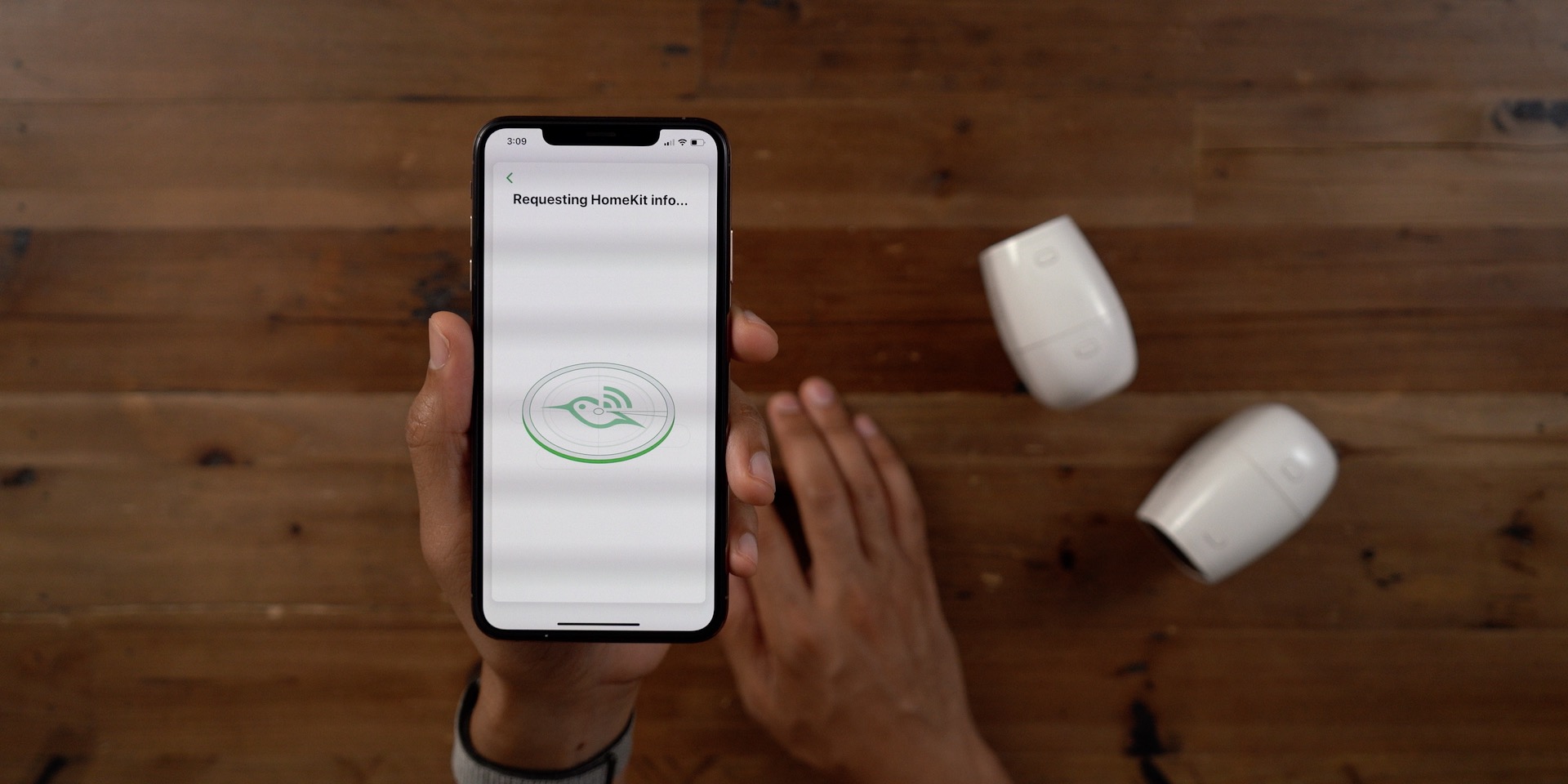 The next step is to configure any cameras connected to your base station. Arlo Pro 2 cameras include two primary functions — they can act as a standard camera for viewing at any time, and they can also act as a motion sensor to trigger automation. 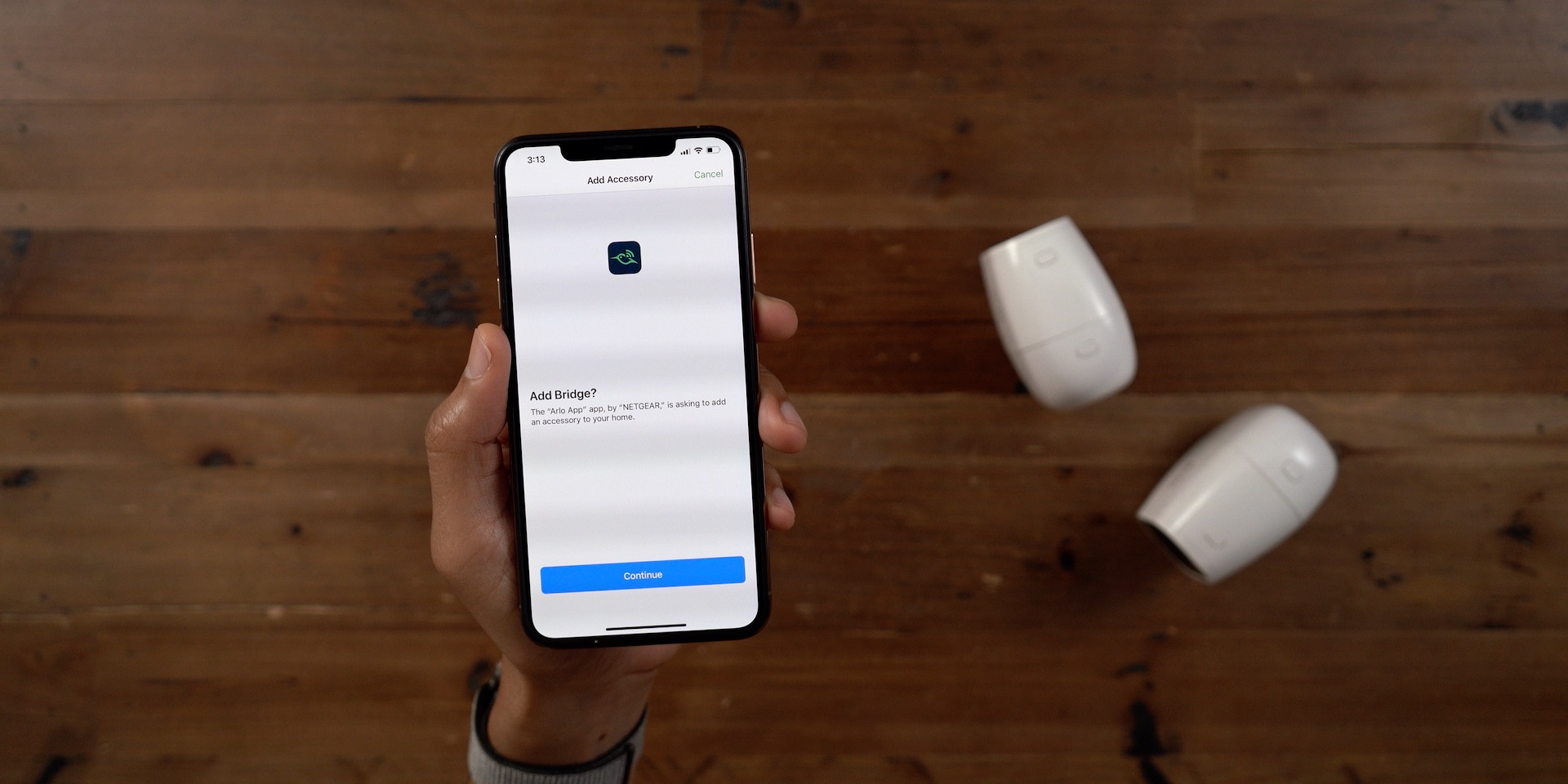 The Home app allows you to rename the viewing and motion functions independently of one another. Users also have the ability to reassign cameras to specific rooms and include cameras in favorites for display on the Home tab within the Home app. 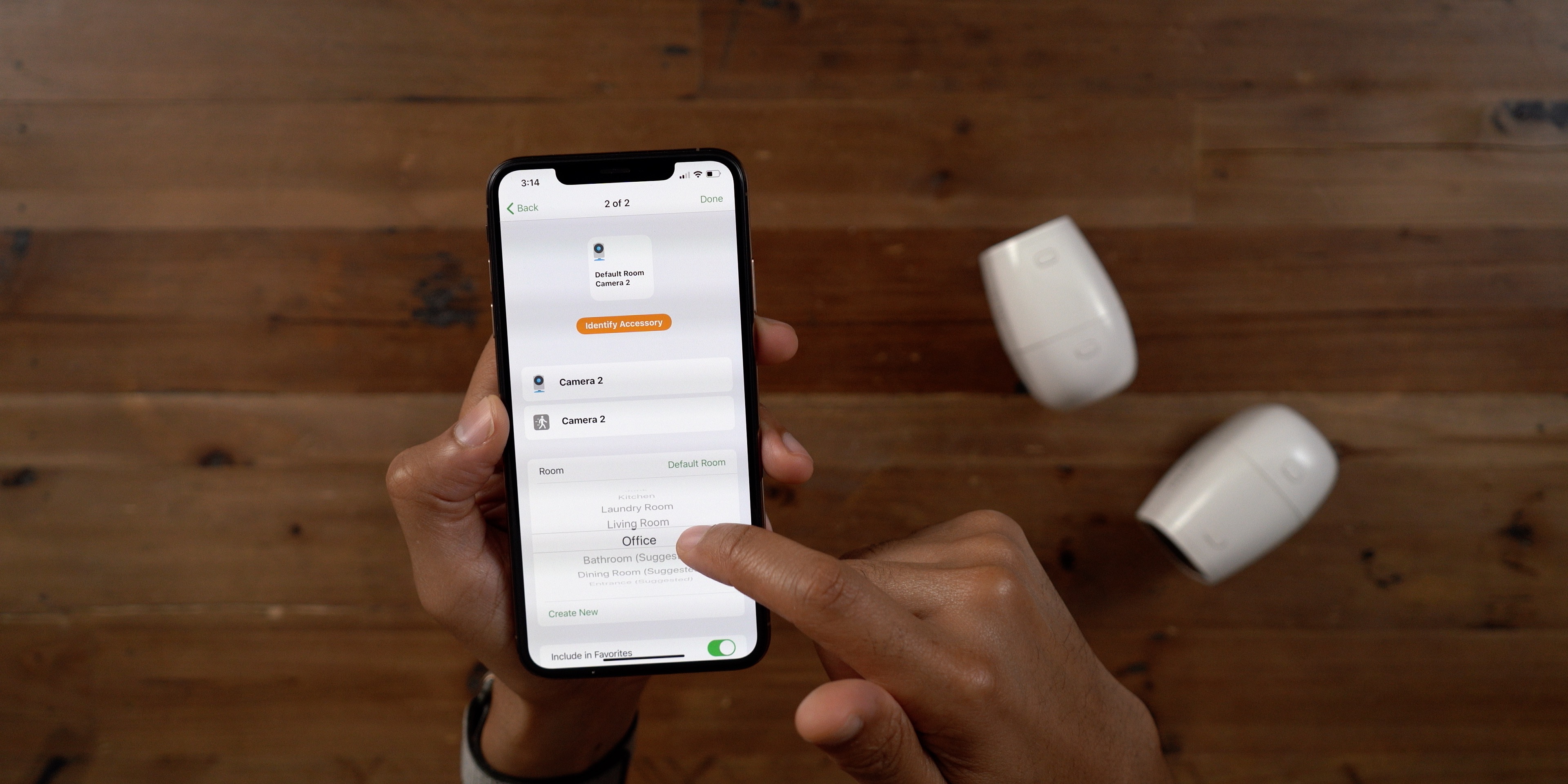 It is so nice to finally be able to access my Arlo cameras within the Home app. I can view a preview of any cameras I have set up within the Home app as a favorite, allowing me to gain a quick glance of everything that’s happening on the premises at any given time. 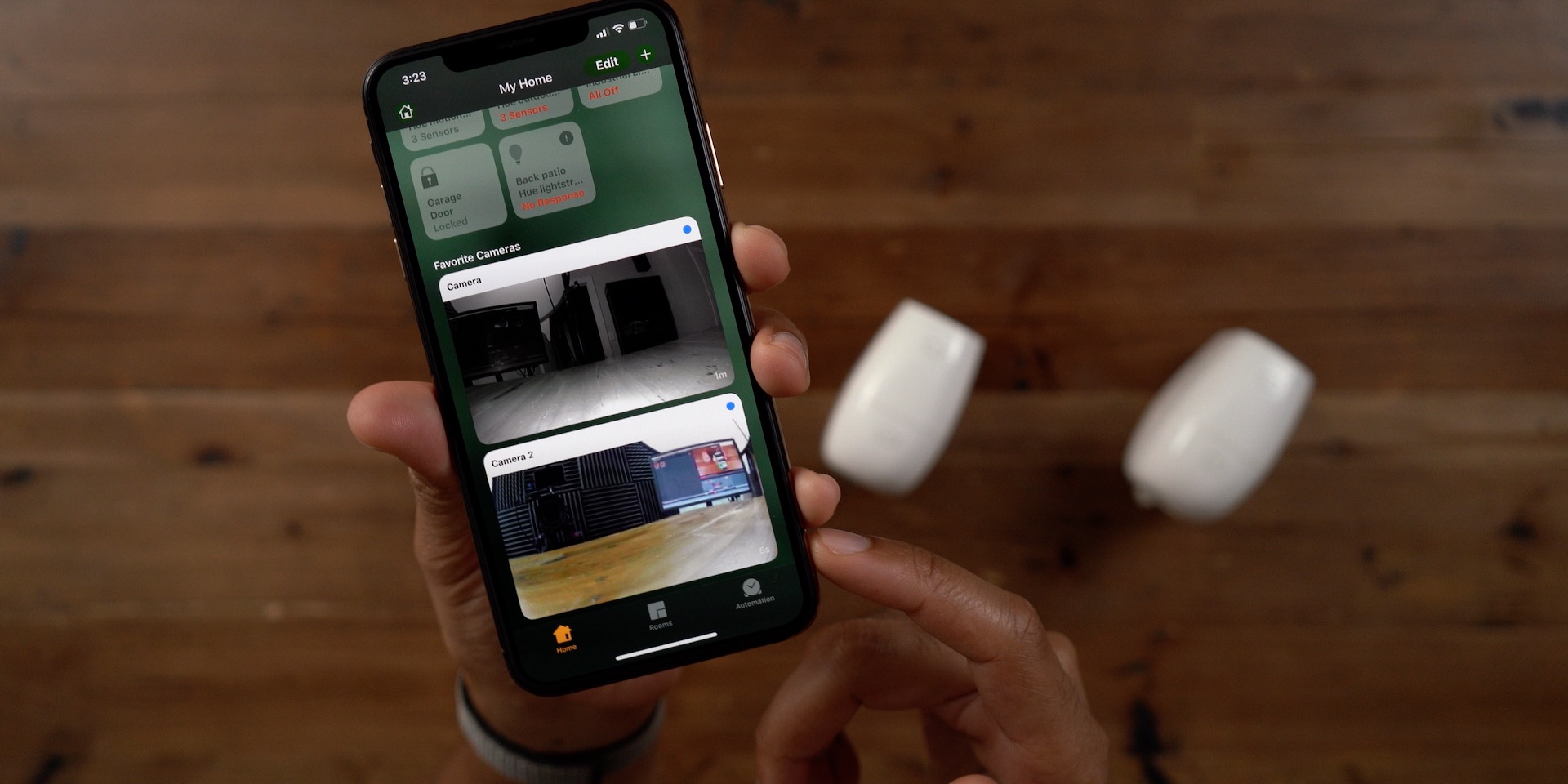 Preview cameras via the Favorites tab

Of course, you can also tap on any of the cameras for a live view at any time. It should be noted that iOS 12’s HomeKit camera live view interface is a bit more limited than what you’ll find in iOS 13. 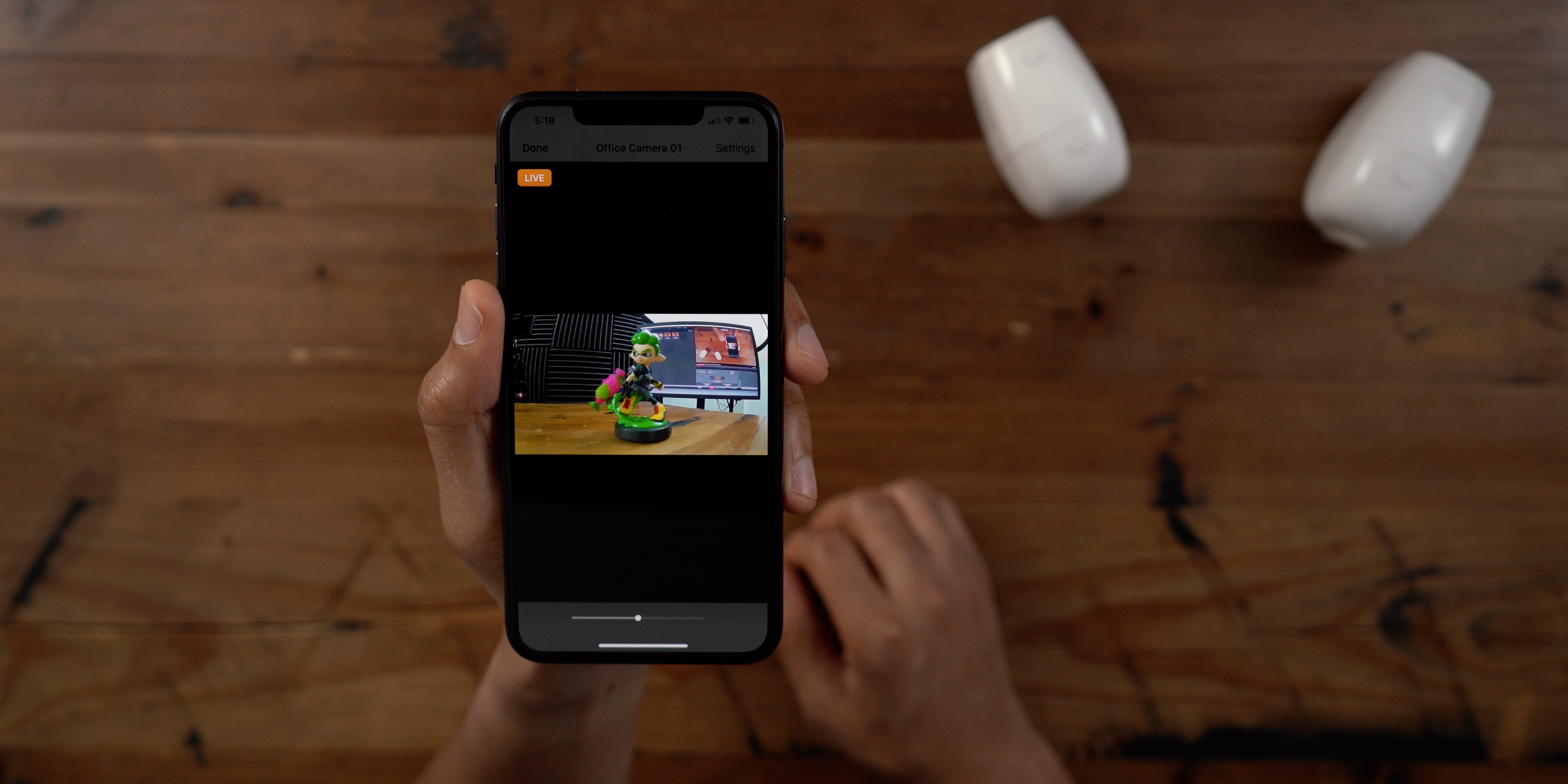 With iOS 13 you can quickly toggle between any cameras configured via a handy drop-down menu. Another nice thing about the live feed interface in iOS 13 is that you can easily access any other HomeKit accessories within the same room with a tap of the room button in the bottom right-hand corner. This is handy, for instance, if you detect motion in a room, and want to quickly turn on a light in the same room. 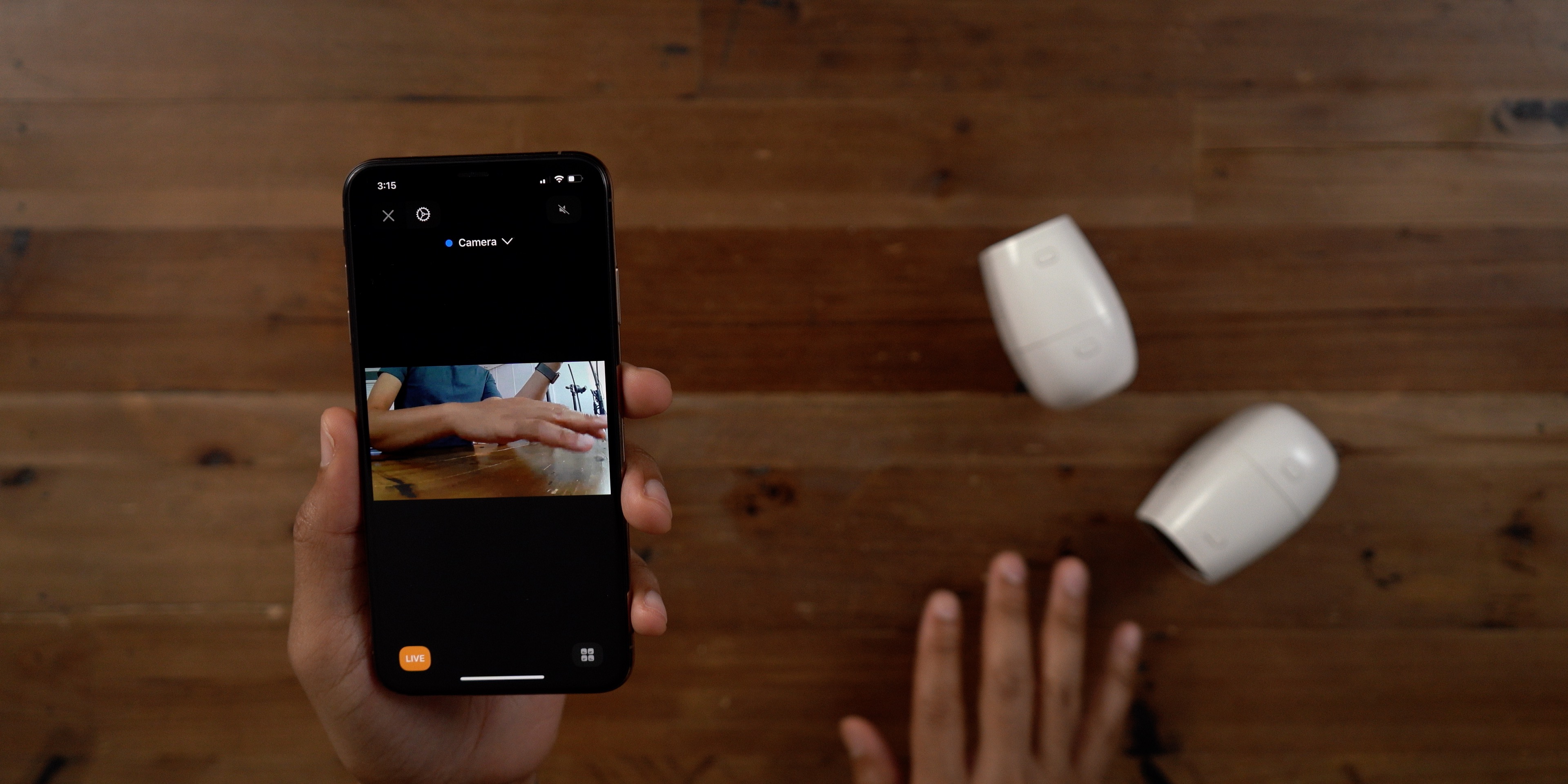 Siri support means that I can simply say “Hey Siri, show me the Office camera” and Siri will quickly launch the Home app with a live view of the camera.

Another great feature is the interactive notifications. When a camera detects motion, a notification will display that includes a live camera feed should you wish to quickly view it. Similar notifications have been long available within the Arlo app, but it’s nice to have such functionality within the native Home app. 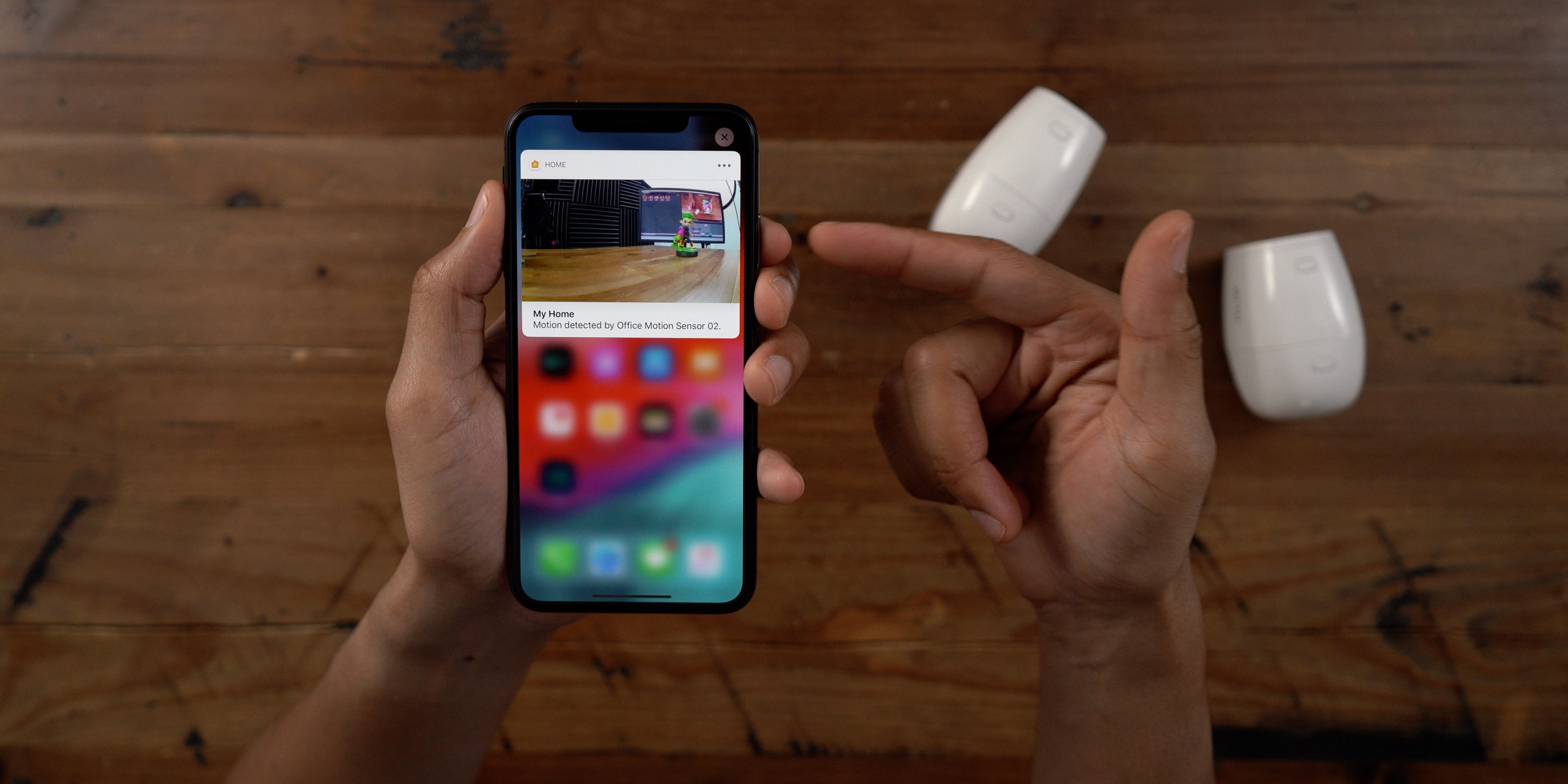 Notifications provide a preview of the current scene

But the most important thing about HomeKit support with Arlo camera is how it allows you to interact with other HomeKit-enabled devices. Previously Arlo cameras were more or less quarantined from the rest of the HomeKit-enabled smart devices, which limited the potential and usefulness of these cameras. 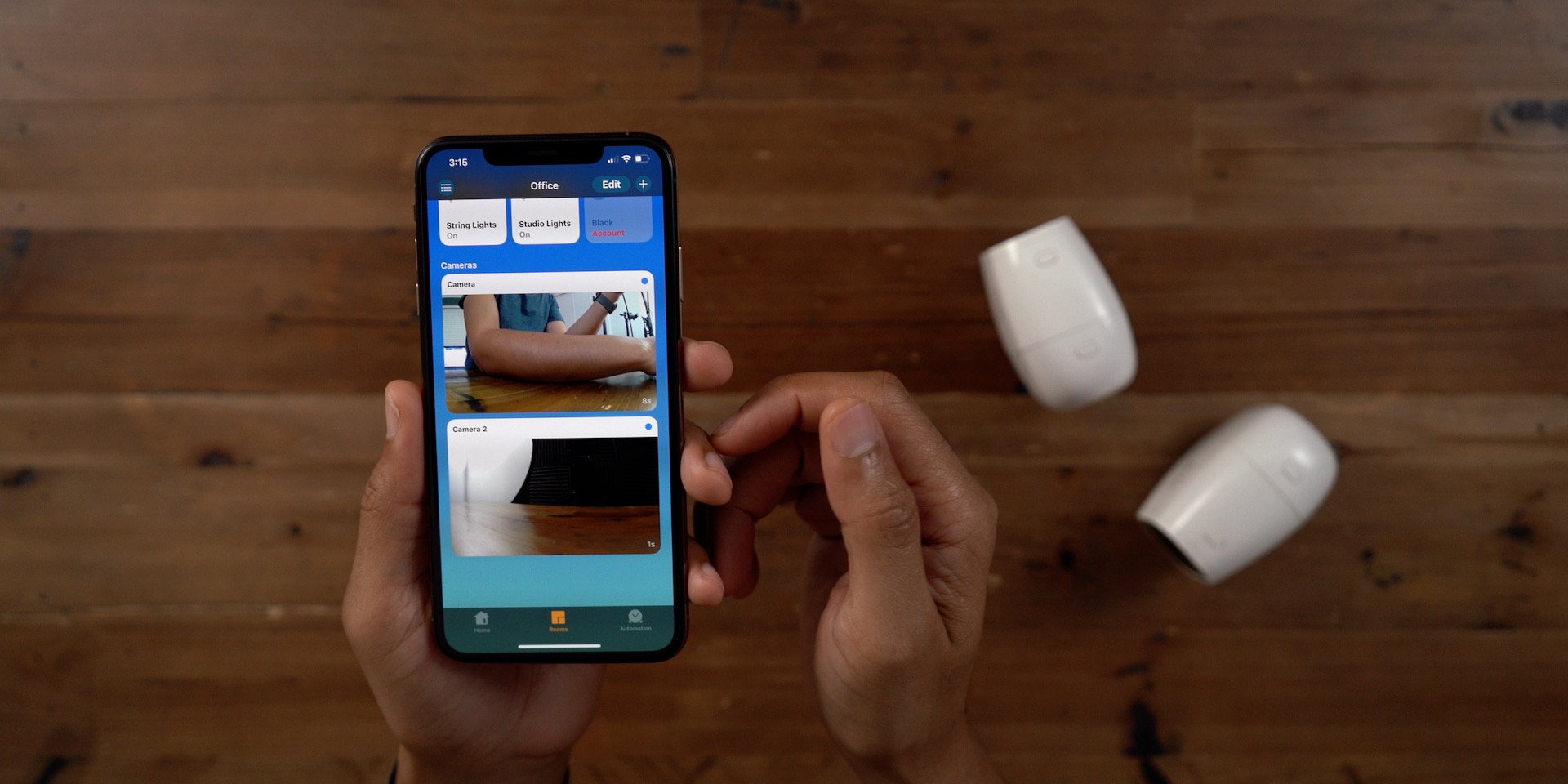 For example, without HomeKit support, I couldn’t make my Philips Hue light turn on when my Arlo Pro 2 camera detected motion at night. With HomeKit support now in tow, such combinations are a real possibility.

There’s still a place for the Arlo app

That’s not to say that HomeKit support will entirely supplant the need for the Arlo app. There remain many functions that remain useful for Arlo app users — general configuration and optimization, to the ability to utilize features like the two-way radios, to the lack of support for other devices like the Arlo Ultra and security lights within the Home app.

The most obvious difference between the two is the inability to save or view recordings directly from the Home app. Although the Home app provides real-time monitoring, it’s the DVR functionality that makes a security-oriented camera system like the Arlo so effective. 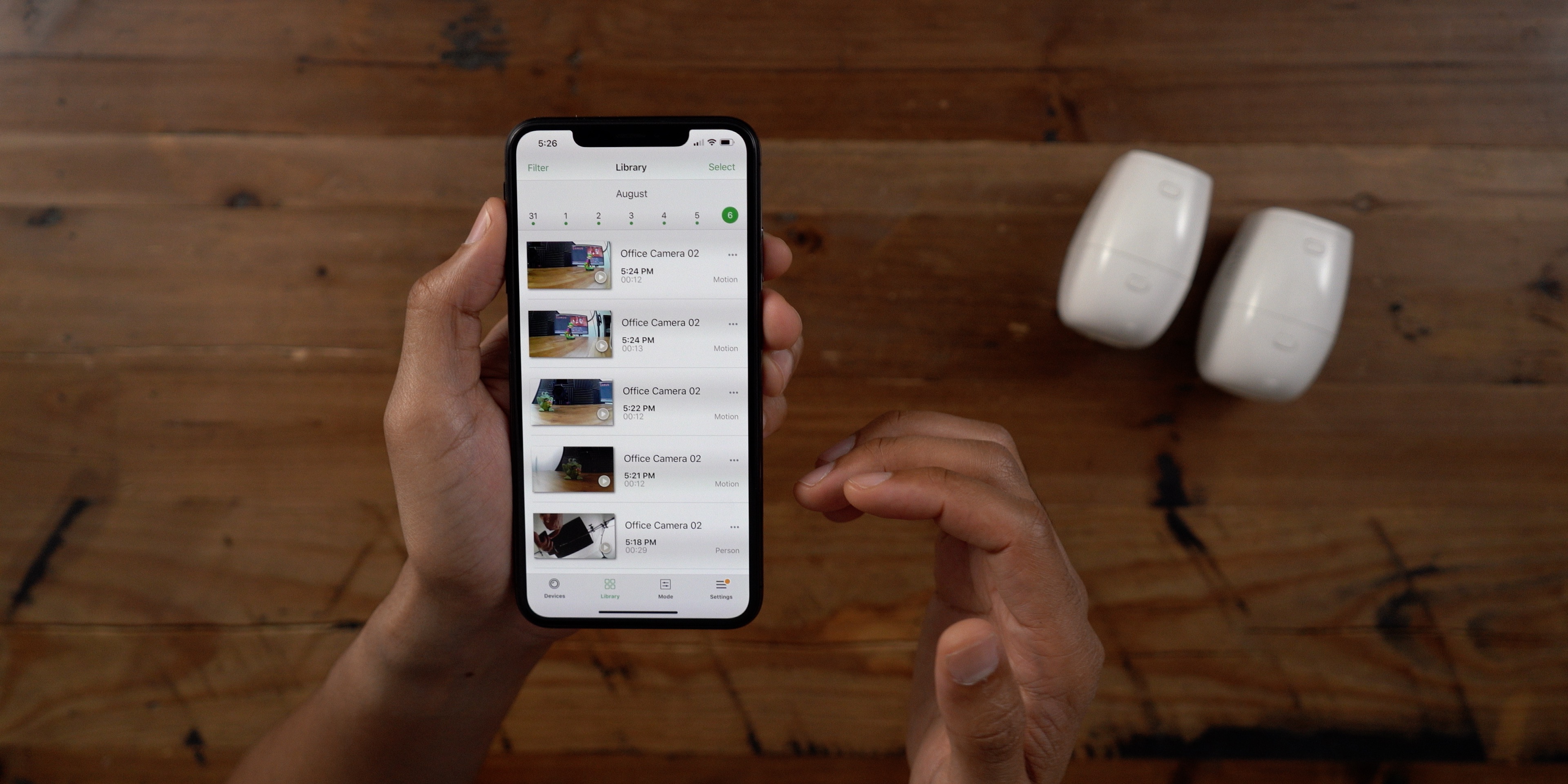 Apple announced that it is expanding its support for security cameras in iOS 13 with HomeKit Secure Video, a feature that’s separate from generic HomeKit camera support. Not only will this new service include privacy enhancements, but it will also allow supported cameras to save 10 days of recordings to iCloud at no extra charge for 200GB and 2TB iCloud storage tier subscribers.

As of now, there is currently a limited list of camera makers — Logitech, Eufy, Netatmo, and Robin — that will include support for HomeKit Secure Video in some of their current and upcoming products. Logitech recently announced that its currently-available Circle 2 Wired Security Camera would eventually gain support.

It took a long time, but HomeKit support for the Arlo Pro and Arlo Pro 2 is finally here. Such support won’t eliminate the need for the full Arlo app, but being able to quickly view real-time camera views via Siri, and having the ability to integrate cameras within the rest of the HomeKit setup is a nice first step and a welcomed addition.

Here’s hoping that Arlo can get other devices up and running with HomeKit support as well, most notably, the 4K-enabled Arlo Ultra that we recently reviewed.

What are your thoughts on the Arlo Pro and Arlo Pro 2 finally gaining HomeKit support? Sound off down below in the comments with your thoughts.