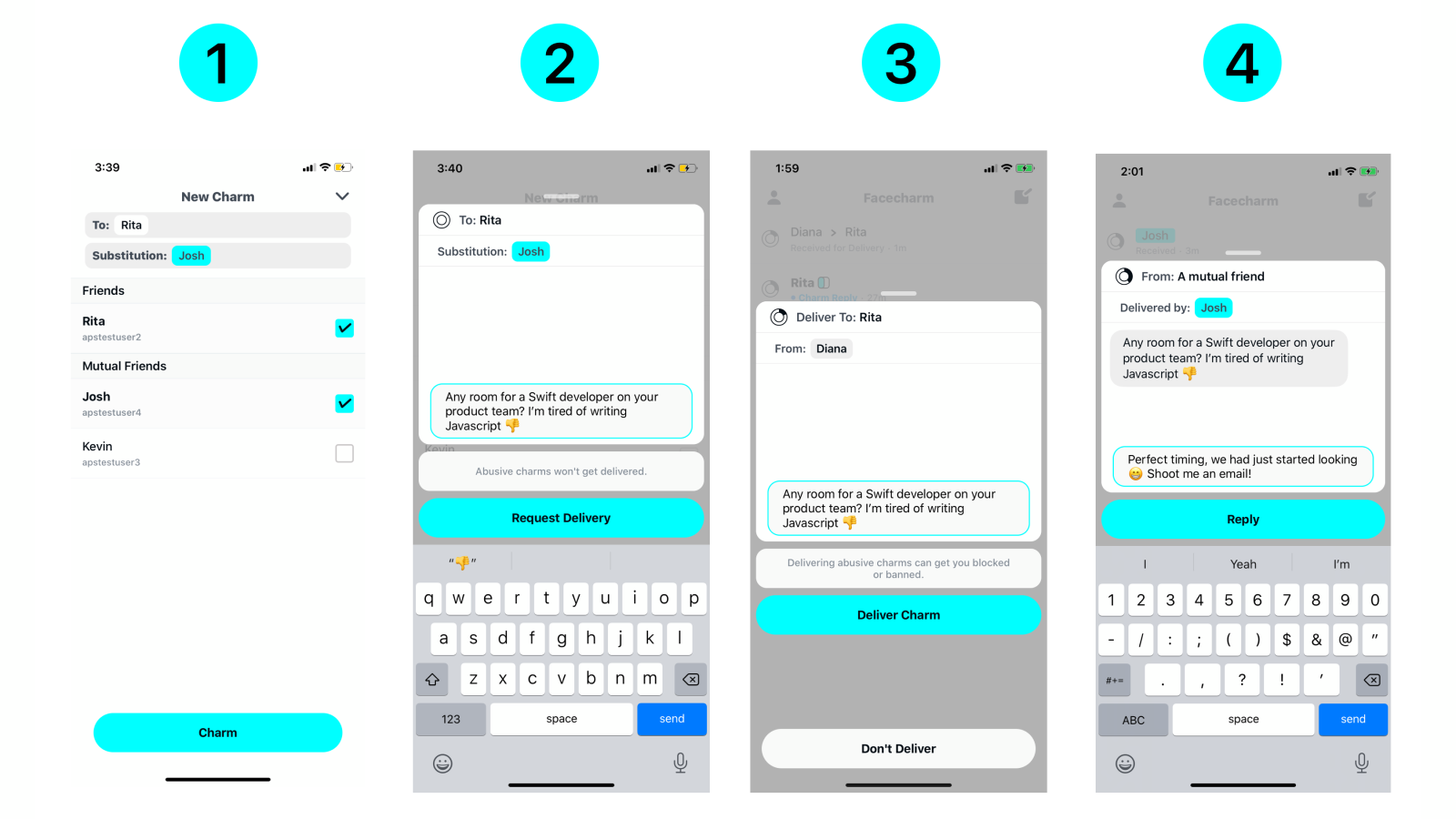 We already know that Apple can be hard to work with when it comes to launching new apps on the App Store. From the beginning, several developers have complained about the company’s strict rules, and it was no different with Martin Otyeka, an independent developer who tried to launch his first iOS app this year — unfortunately without success.

Martin wrote an article about how frustrating it was to create a new idea for a messaging app and then see it rejected by Apple, as the company said he should try to develop an app like “every other messaging app.”

He told us that he became interested to learn Swift programming five years ago, but only last year, he decided to create an app called Facecharm. His idea was to allow users to send anonymous messages, not directly to each other, but through a third person who would intermediate the conversation. Basically, like when you send a message to someone through another person, but now in a digital way.

The app was submitted to the App Store review process on January 9, 2020, and the first rejection came a week later. Apple has argued apps that allow anonymous messages and calls are not appropriate for the App Store. Martin thought the idea of the app might not have been clear to the testers it since the app works based on mutual friends, so the messages are not entirely anonymous.

Even so, he was intrigued by Apple’s first response, as there are other apps on the App Store that allow users to send anonymous messages. The developer made some interface changes, and he then sent the app back to Apple, but it was rejected again.

He spoke to an App Store representative on January 27, who said that “message sending should be entirely manual and performed by the individual identified in the chat.” Apple continued to reject the app in February, this time arguing that its features could allow users to send offensive content.

App Store guidelines state that social apps should offer options to block and report abusive content, so Martin has updated Facecharm once again.

Apple rejected the app again by saying that users should not be able to hide their names or forward messages without being identified. At the same time, apps like WhatsApp and even iMessage lets you forward messages from one person to another without identifying them.

An App Store representative called Martin again last month, this time to say that he should create an app like “every other messaging app where users communicate without a 3rd party.” When he said other apps offer some similar features such as message forwarding, Apple said they couldn’t explain all the reasons why Martin’s app was rejected.

Facecharm’s project is likely to be scrapped, but Martin points out that Apple doesn’t allow small, independent developers to innovate on the App Store since the company itself states that they shouldn’t try to create something different.

In other words, don’t innovate — just conform to existing paradigms. This hurts coming from Apple, the company whose innovations have led to the decimation of many old paradigms. I was also told that whoever delivers the message should also be the “original author of the message,” seemingly invalidating content sharing and messaging forwarding, features that are present in all messaging apps including iMessage.

Another point criticized by the developer is how the App Store representatives deal with these issues. They don’t share the precise reason for the app’s rejection, and they aren’t that helpful either, Martin said.

Even if you think Facecharm wouldn’t be a hit, Martin Otyeka, as well as other developers, didn’t even get a chance to reach iOS users on the App Store. Again, that is not the first report of this kind, and it probably won’t be the last.

If you are an iOS developer, have you ever experienced a difficult situation with the App Store Review process? Let us know in the comments below.