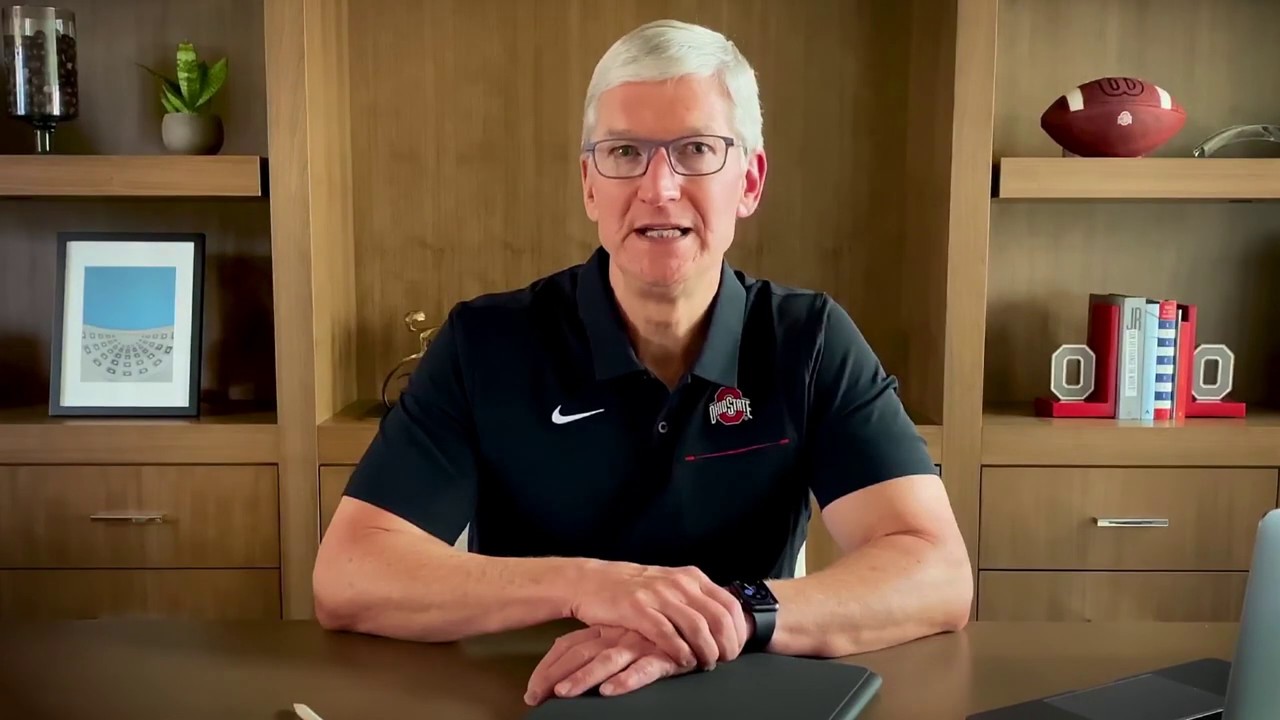 Update 5/11: iHeartMedia has announced today that Tim Cook will take part in its special podcast “Commencement: Speeches for the Class of 2020.” The episodes will be released on May 15.

As expected, Apple CEO Tim Cook delivered Ohio State’s virtual commencement address today. In the address, which was shared on YouTube, Cook calls on graduates to “build a better future than the one you thought was certain” amid this “fearful time.”

In the virtual address, Cook apologized to graduates for the lack of an in-person celebration this year:

Graduates, I am sorry that we’re not celebrating together today. Your class is a special one — marked by history like few others in OSU’s 150 years. And while we aren’t shoulder to shoulder in the Horseshoe, filling it to the rafters, I know your parents, your loved ones, your friends and teachers are no less overwhelmed with the pride in you and in what you have achieved.

Cook also acknowledged that he couldn’t believe his luck when he joined Apple in 1998, but it hasn’t always been easy:

When I joined Apple in 1998, I couldn’t believe my luck. I was going to spend the rest of my professional life working for Steve Jobs.

But fate comes like a thief in the night. The loneliness I felt when we lost Steve was proof there is nothing more eternal, or more powerful, than the impact we have on others.

Those of us who can look back on this time and remember inconveniences and even boredom can count themselves lucky. Many more will know real hardship and fear. Others still will be cut to the bone.

Elsewhere in the speech, Cook spoke on what he’s been doing to fill the “odd gaps of time” he now has at home:

Not being able to leave the house leaves you with a lot of odd gaps of time to fill. I’ve been trying to use them to read, and I keep coming back to Abraham Lincoln.

I’d recommend it to anyone who wants to put these times into perspective. You’ll be shocked at how clever and funny and alive his thinking still is, how this reserved and humble man managed, in noisy times to call others to hope.

It’s also hard to imagine someone more defined by their circumstances. Lincoln found his country on fire and chose to run into the flames. And he gave everything he had to bring his people — chaotic and squabbling, fundamentally flawed yet fundamentally good — along with him.

Finally, Cook ended the speech by calling on Ohio State graduates to “build a better future than the one you thought was certain.”

You’re the pride of your parents and grandparents, of aunts, uncles and teachers, of the communities that shaped you in ways seen and unseen.

You weren’t promised this day. Many of you had to fight hard to earn it.

Build a better future than the one you thought was certain. And in a fearful time, call us once again to hope.

You can watch the full commencement address from Tim Cook to Ohio State graduates below.