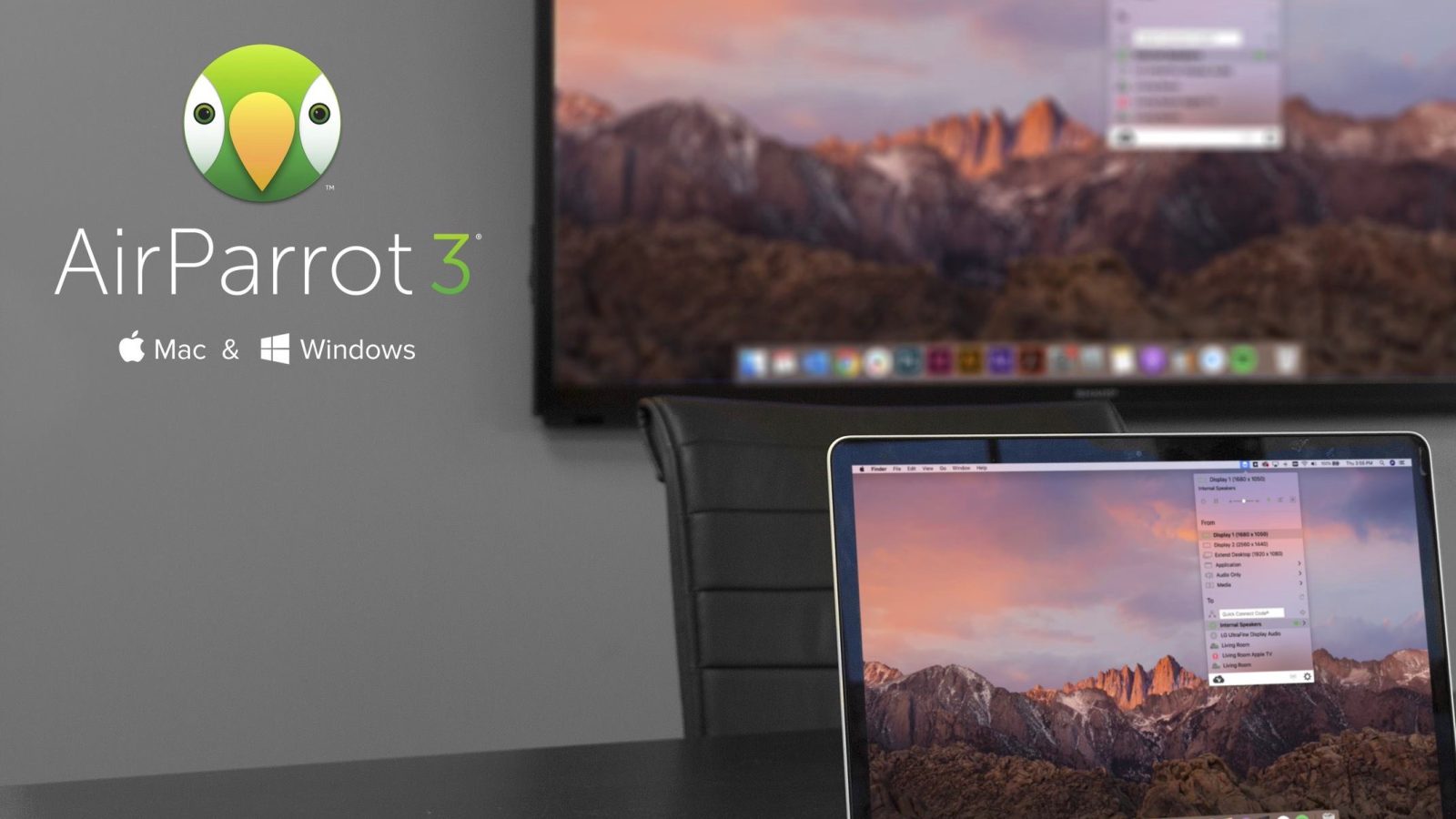 AirParrot is a popular utility on Mac and Windows that allows you to wireless mirror your screen or stream media files to other devices. Today, AirParrot 3 has been released for Mac and Windows, bringing performance improvements, HomePod integration, and more.

There are also performance improvements across the board. AirParrot 3 uses “up to 50% less CPU by offloading video processing to the GPU.” This means you can expect strong performance even when sharing streaming video content such as gameplay or YouTube.

There are also two notable enhancements for Windows users — one of which is particularly important for HomePod users:

Of course, you can stream and mirror your Mac’s display to Apple TV natively, but AirParrot packs additional features as well as cross-platform support for Windows. You can access AirParrot directly from your menu bar and stream your entire screen, media files, or a specific application to a variety of other platforms, including Apple TV, Chromecast, and more.

Check out the full press release for today’s release of AirParrot 3 below. The app is available now starting at $15.99.

Significant performance advancements and new features highlight AirParrot 3, the latest release in the popular AirParrot product line that has sold over one million units to date.

Screen mirroring latency measures under 16 milliseconds at 60 frames per second for near real-time mirroring.

“Latency of 16 milliseconds is imperceptible to the human eye,” Squirrels CEO and co-founder Andrew Gould said. “For comparison, the average human blink takes between 100-400 milliseconds. With AirParrot 3, your screen content is captured, encoded, transmitted, decoded and displayed in a fraction of that time. This is top-tier performance that rivals any screen mirroring technology.”

“The GPU is much better at video processing,” Gerstacker said. “It can do it faster while using less power, and it leaves the CPU available to do other tasks on your computer. This makes AirParrot 3 viable even for lower-end laptops with weaker CPUs.”

These AirParrot 3 specs enable it to excel where screen mirroring technology traditionally falls short, such as when sharing streaming video content like YouTube videos or gameplay.

AirParrot 3 brings extended desktop functionality to Windows devices, a highly requested AirParrot feature that was previously only available on Mac.

“Extended desktop allows people to use their TV as an additional computer monitor that’s completely wireless,” Gould said. “This is helpful when people are working from home or when they just want more desktop space. We’re excited that Windows users can enjoy it, too.”

AirParrot 3 adds Apple HomePod streaming from Windows devices, an AirParrot feature that was previously only available for Mac. Wirelessly stream system audio or media files such as MP3 or MP4 audio from a computer to one or more HomePod speakers.

AirParrot 3 supports 4K streaming and adds compatibility for a wider range of audio and video codecs. Users can stream media files in 4K with surround sound.

AirParrot 3 is available now for Mac and Windows devices. Pricing starts at $15.99 on the online store.

AirParrot 3 is a wireless screen mirroring and streaming software for Mac and Windows devices. Mirror and stream videos, audio, presentations and on-screen content to a wide range of AirPlay and Google Cast receivers including Apple TV, Chromecast, Apple HomePod and Reflector.

Squirrels is a software-development company established in 2012 that specializes in wireless audio and video transmission. Popular Squirrels products include Ditto, AirParrot and Reflector. More information about these products and Squirrels can be found at http://airsquirrels.com.