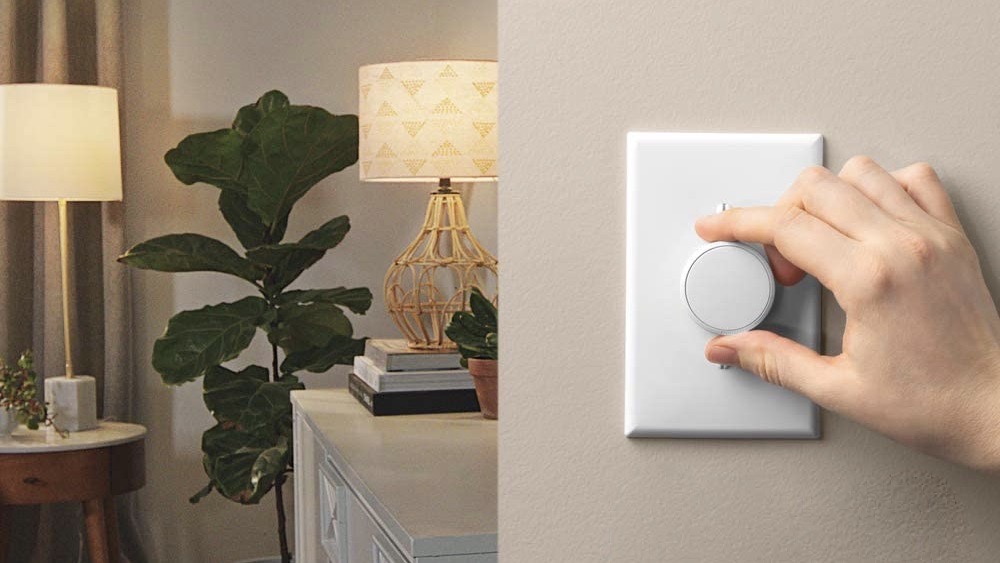 Philips Hue bulbs are one of the easiest ways to give your existing light fixtures smart home capabilities, including through Apple’s HomeKit platform. The problem with Philips Hue switches is that whenever a wall light switch is flipped off, the smart lights become unresponsive. The Lutron Aurora dimmer is a simple yet ingenious way to solve this problem.

Most of my entire house is outfitted with Philips Hue bulbs, including lamps and fixtures. I’ve slowly been building out my HomeKit lighting setup over the years, and the versatility of Philips Hue bulbs has made it easy to maintain the setup, despite moving apartments and eventually into a house.

Philips Hue bulbs are also incredibly useful for renters: They simply replace “dumb” bulbs and require no wiring changes or any other upgrades that might not be approved by your landlord.

For me, I’ve become perfectly acquainted with never using a physical light switch — I know that everything can be managed with ease, thanks to the Home app on iPhone, iPad, and Mac, as well as Siri. I have automations setup for specific times of day, scenes for things like work and relaxation, and automations for leaving and arriving home.

But as anyone with Philips Hue smart bulbs has experienced, whenever a wall light switch is flipped off, the smart lights will go unresponsive. This is because Hue bulbs require the lights to stay in the “on” position at all times to be controlled via the Hue app or HomeKit. It’s likely not you flipping that light switch on and off, but rather someone you live with or guests.

Lutron’s Aurora dimmer is designed to solve that problem. 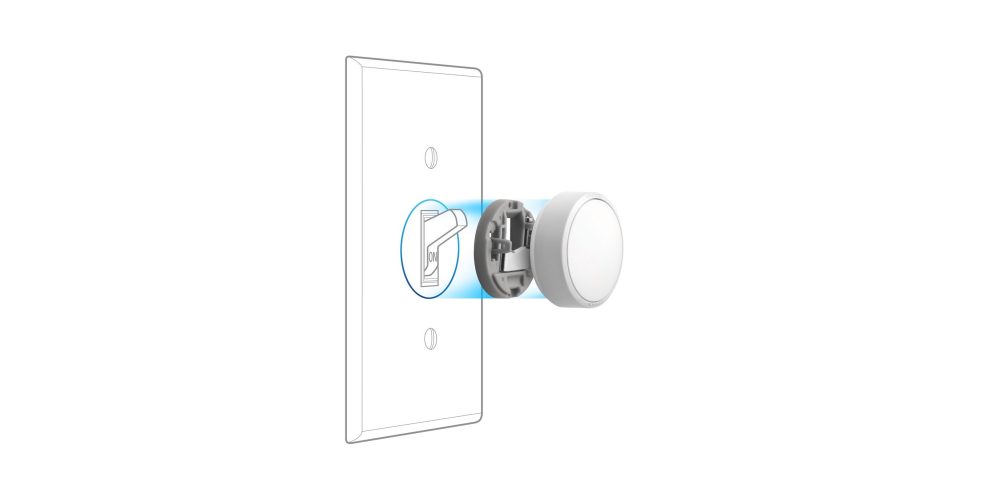 The Lutron Aurora is a simple accessory that is designed to fit over your existing toggle switches. The installation process is incredibly straightforward, with the round-shaped dimmer snapping over your toggle switch. Then, you tighten the base with a screwdriver and install the front cover.

Once you have the hardware installed, you set up the Aurora’s integration with the Philips Hue app. The Aurora dimmer integrates with Philips Hue through the “Friends of Hue” platform. As you can see in the screenshots below, just choose the Lutron Aurora from the “Friends of Hue” list in the Hue app. From there, you can choose what happens when the Lutron Aurora is controlled. 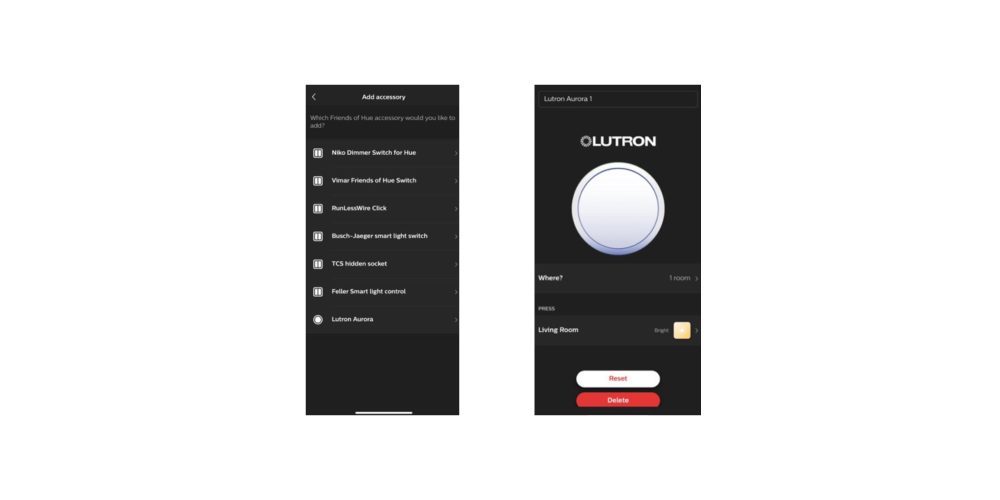 Side note: Everything is managed via the Hue app — not the Home app or the Lutron app. This means you’ll need to make sure your rooms and accessories are in sync between the Home app and the Hue app. This can be a painstaking process, but it’s worth it in the end.

You can pair the Lutron Aurora to multiple accessories, which means one switch doesn’t have to control one set of lights. For example, I have mine set up to control the overhead fixture as well as the floor lamp, both of which use Philips Hue bulbs.

This also means you don’t necessarily have to buy multiple Lutron Aurora dimmers for each room. For example, if you have two fixtures or lamps, you can set it up such that one Lutron Aurora controls both of them — or even all of the lights in the room.

Once the setup process is complete, the Lutron Aurora works largely like a normal light switch. The Aurora can be pushed like a button to power accessories on and off or turned to the left or right to increase or decrease accessory brightness.

Again, the benefit here is that you retain smart home control, even if you or someone else in your house accidentally flips the manual light switch. 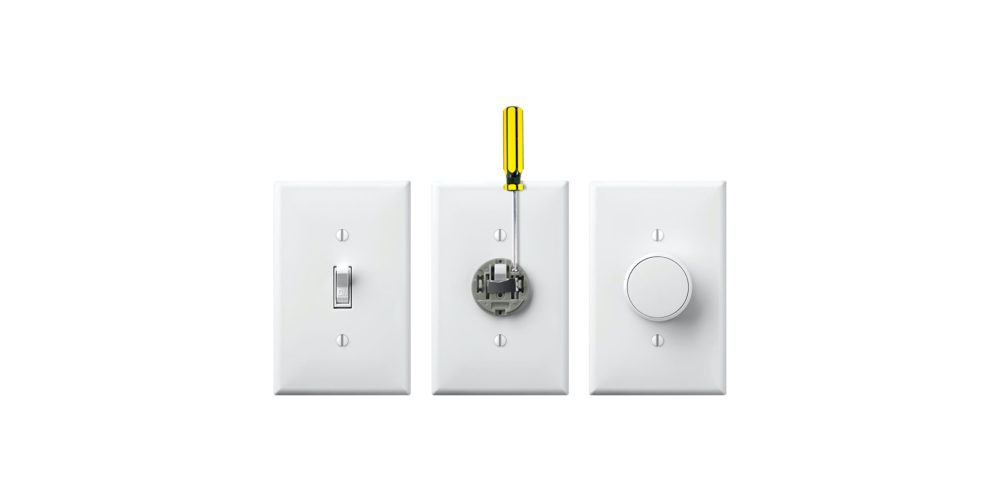 There are some limitations. First, the Lutron Aurora only works with Philips Hue bulbs, so if you have other smart bulbs scattered throughout your smart home setup, you should keep that limitation in mind. Secondly, Lutron Aurora dimmers only fit over the traditional “flip” style switches. If you have another style of wall switch, the Lutron Aurora won’t work for you.

There are other solutions to giving smart home lighting in-wall control. For instance, the Lutron Caséta in-wall dimmers (review) replace the existing light switches in your house with connected switches. Philips Hue also sells its own Smart Dimmer Switch, but this does not fit over your existing switches.

These solutions offer their own benefits, such as the Lutron Caséta switches also being able to control celling fans (review), but neither are as easy and renter-friendly as the Lutron Aurora.

The Lutron Aurora is available on Amazon for just under $40. If you’re a Philips Hue user, this is an easy way to add some additional convenience to your smart home setup, even if it’s more to benefit other members of your household and guests than you.