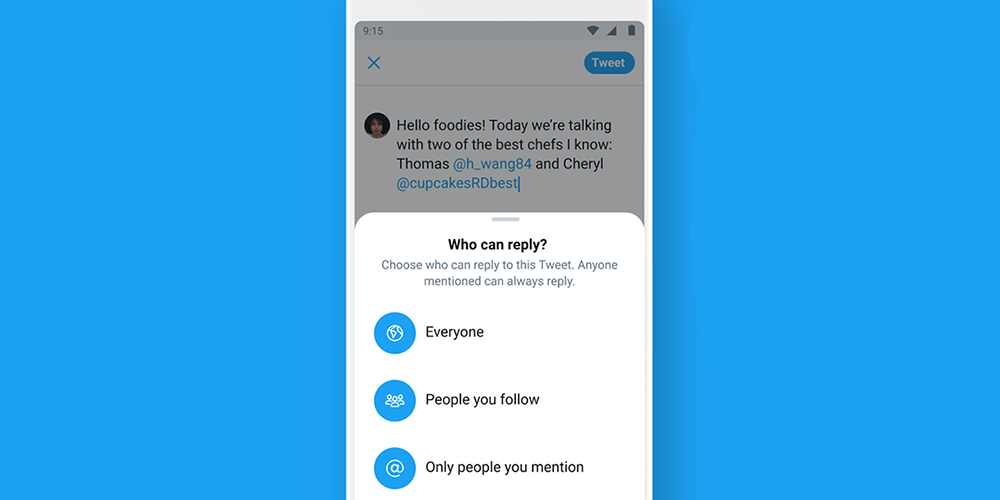 Twitter tested an anti-troll feature earlier in the year, allowing select users to choose who is able to reply to their tweets. The experiment was clearly a success, as the latest version of the iOS app makes the feature available to all …

Update 8/6 12:30 pm: It turns out Twitter made a mistake and is not rolling out the feature widely yet. The company told The Verge that it accidentally published the wrong release notes.

Update 8/11: Now the feature is actually rolling out (via The Verge).

Twitter explained how the feature works back when it began the test.

Sometimes, unwanted replies make it hard to have meaningful conversations.

Before you Tweet, you’ll [now] be able to choose who can reply with three options:

Tweets with the latter two settings will be labeled and the reply icon will be grayed out so that it’s clear for people if they can’t reply. People who can’t reply will still be able to view, Retweet, Retweet with Comment, and like these Tweets.

The Verge noticed the full-scale rollout in the What’s New notes for the app.

In May, we tested a new way to have a chat with exactly who you want, so you can create and consume more meaningful exchanges. Now, everyone can try this new feature and choose who can reply to their Tweets.

All tweets default to ‘everyone can reply,’ but you can simply tap this text in order to select one of the other options. There is no way to change the default for future texts, however, so you’ll have to do it each time if you want to limit replies to all your tweets.

In the worst of cases, Twitter trolls can lead people to fear for their safety. Some women have reported replies threatening sexual violence, for example. Other people just find it irritating to read junk replies. The anti-troll feature should now let everyone choose how open to make their conversation.

It’s not yet clear whether the feature is also rolling out on Android and the web. It’s also not yet showing up for all iOS users, so it appears it may take a few hours or days to update for everyone.

The social network is still reeling from the impact of the recent hack, but there has now been an arrest in the case.