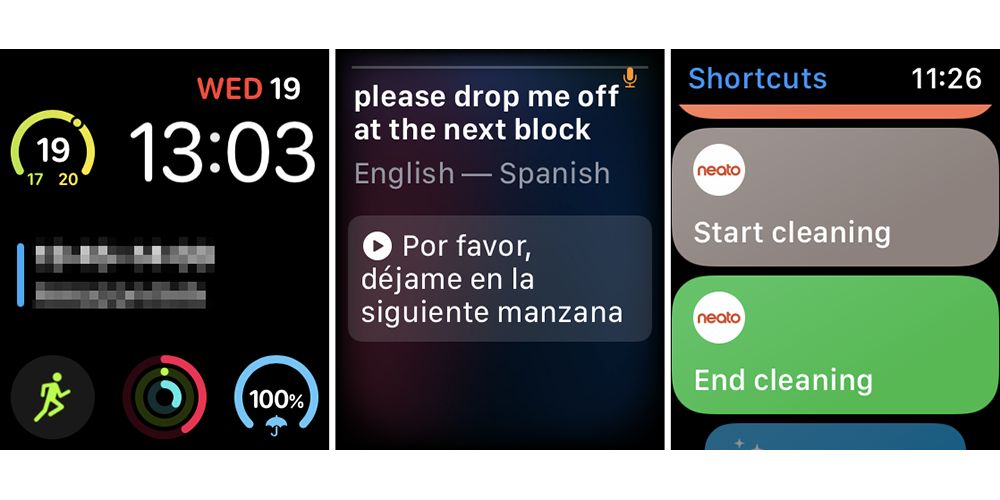 When I began my watchOS 7 Diary on installing the public beta, I listed seven features I was looking forward to testing. These have so far proven to be a mix of hits and misses, but two of the features in particular have made it unquestionably worthwhile.

Apple highlights 13 new features in its preview of watchOS 7 …

I then highlighted in bold the ones which appealed to me:

More than one complication per app

The only thing I’m using it for so far is the weather app, but it’s great to have both temperature and likelihood of rain instantly visible as complications. These are the two things I want to know when I’m about to leave: do I need to take a jacket or jumper, and an umbrella? A quick glance at my wrist now answers both questions.

To enable you to use the Watch for sleep-tracking, watchOS 7 monitors your battery power and prompts you to charge it before you go to bed if it won’t make it through the night. However, this alert tended to come only shortly before bedtime, so the Watch typically needed charging again in the morning.

Of course, reduced battery-life is a common issue with betas, so it may just be that, but I found my previous approach was better.

Most people take some time to get ready in the morning before leaving for work, so it would be perfectly practical to:

If your experience is anything like mine, that will give you full use of your Watch all day and evening, as well as sleep-tracking, without any battery-life issues.

However, the whole thing turned out to be academic: at least in the first public beta, sleep-tracking proved hopeless!

It was good at telling when I was in bed. The bedtime and getting up times shown were accurate. But what it couldn’t do with any reliability at all was tell when I was asleep and when I was awake.

The UK had a bit of a heatwave recently. For British values of heat, of course. But while Americans would laugh at our idea of hot weather, the country isn’t built for it. Our building insulation isn’t good at keeping out heat, aircon is not found in most homes and even ceiling fans are rare here. The result of this was that I last week twice woke between 4am and 4.30am, and was unable to get back to sleep. In both cases, the sleep tracking feature recognized a break in my sleep, but decided that I almost immediately fell asleep again.

This was a bit of an ecosystem fail, as one morning I was using my phone in bed while it thought I was asleep, and the other morning reading on my iPad.

One sleep feature I do like, though, is the wind-down feature. During your scheduled sleep hours, Do Not Disturb is automatically activated, and the display is put into a reduced-information mode. You get only a dimly-lit screen with the date, time, and a reminder of any alarm time set.

I’d hoped that the new Dance workout might make the Watch better at tracking my exercise while dancing tango, and tested it with both a lesson and a practice session.

No luck. Ok, tango is one of the more sedate forms of dance, especially for leaders, but it’s still at least equivalent to a brisk walk. The Watch, however, just sniffed at the idea and credited me with less exercise and a lower calorie consumption than it does on a gentle stroll.

This was a bit of a long-shot. I said that I didn’t need hand-washing reminders on getting home, but there was a small chance that it might have led Apple to improve home presence detection. It didn’t.

This is obviously pretty useless right now, when we can’t travel anywhere, but will be a massively useful feature when we can. My girlfriend is French and also fluent in Spanish, and she declared translations into both languages to be ‘perfect’ – with very good accents too.

This will make a huge difference when travelling. Instead of having to get my phone out when I want to ask something, I’ll just be able to raise my wrist to my mouth. The fact that it does this on-device means it will be practical to use it wherever it is needed, without requiring a data connection.

The beta version needs a little work. Once or twice, it enabled me to translate a follow-up phrase without it asking me to repeat the language, but other times it didn’t. It would be great to simply set the translation language when you arrive in a country and have it default to this. Better yet, have it check its location and then lookup the primary language(s) for that country, proactively asking if we want to set the language, and offering a choice of local languages where appropriate.

Finally, it’s handy to have these on the Watch as well as my phone. I think it may prompt me to create more of them too.

Sleep-tracking is the big disappointment. Clearly Apple needs to do more work here, and it’s particularly silly that it can’t tell I’m awake from the fact that I’m using one of my other Apple devices. Hopefully, this will improve in future betas.

Dance workout performance is also disappointing, but, as I say, tango is probably the most sedate form of dance for leaders (followers do more work), so I don’t think this is too big a fail.

But the big wins for me are multiple complications and the translation feature. The latter alone would make the upgrade a no-brainer in normal times, and indeed it’s a feature for which I’d even have been willing to upgrade my Watch, so it’s great that it runs on everything from the Series 3.

There have been no gotchas so far. Perhaps battery life has taken a bit of a hit, but not a massive one for sure. I haven’t experienced any crashes, nor any apps failing to open or in any way misbehaving bar the small glitch I mentioned with translation. If you’re on the fence about installing it, I’d say go ahead even though there’s no downgrade option.

If you’re running either developer or public beta yourself, please share your own experiences in the comments.