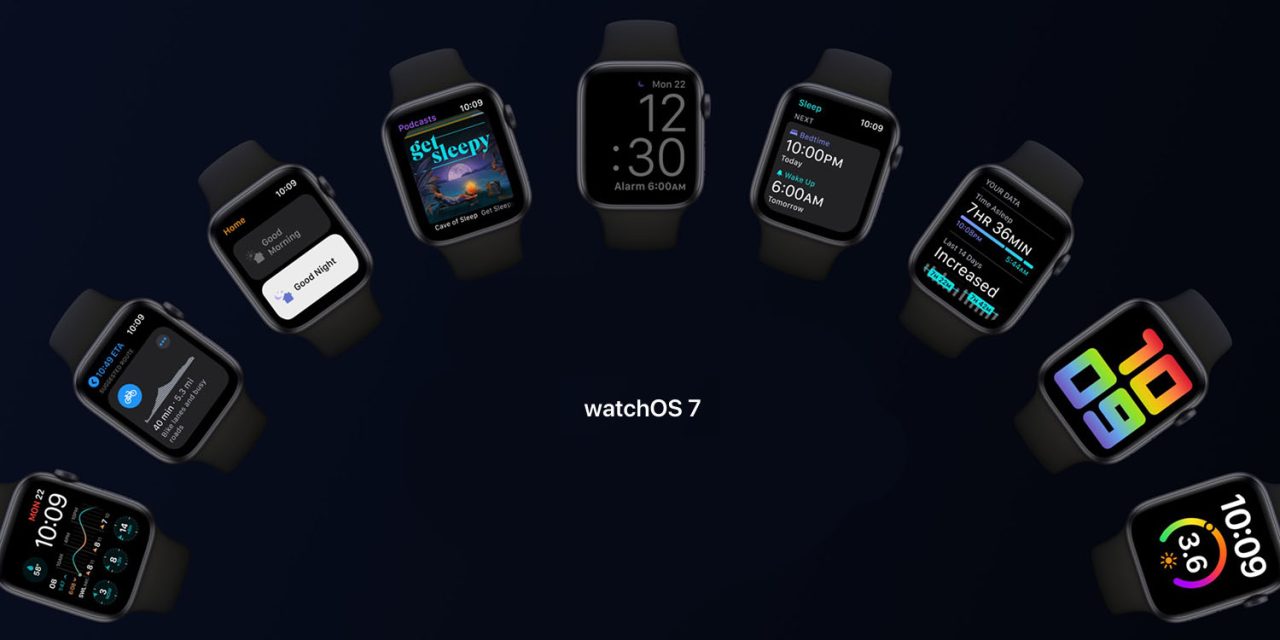 I mentioned last month that I’ve always avoided OS betas in the past, and that remains my firm and unwavering policy where macOS is concerned. However, testing the public beta of iOS 14 on my iPhone, and iPadOS 14 on my iPad, didn’t reveal any nasty surprises, so I’m hoping to have the same experience with watchOS 7.

The majority of you are doing the sensible thing and waiting for the official release. That’s especially smart with the Watch, as there’s no ability to remove the beta: once you’re on watchOS 7, you’re stuck with it. But I figure it’s a relatively low risk for two reasons …

First, my positive experience of the iPhone and iPad betas. Second, any glitches with my Watch wouldn’t be anything worse than a mild inconvenience given that I’m not exactly spending much time mobile at present. Even if the battery-life proves terrible – generally the most likely pain point with a beta – I can always charge it again before heading out.

The main watchOS 7 features highlighted by Apple are:

The bold ones are the ones that appeal to me, so let’s talk about these.

More than one complication per app

I can’t think of a great deal of use for this, but I do have one – and that’s a particularly convenient one. In terms of weather, I care about two things: temperature, and the likelihood of rain. I can now have both things constantly visible, with hourly forecasts for either one just one tap away.

I generally aim to be in bed by midnight most nights, and wake at 7 am, so I should get a reasonable amount of sleep. But in non-lockdown times there are some variations. On nights when I’m out dancing tango in the evening, I might not get to bed until 2 am, and I also have late nights sometimes when dining with friends or returning from the theatre (when we often walk home and sit up for a while afterwards). I then try to make up for the late nights by having one early night in the week – as well as lay-ins on the weekend.

But while I think this should all pretty much work out, I don’t know for sure how much sleep I average on a weekly basis, so it would be good to check.

Of course, this is all rather academic during the lockdown: there’s no dance, no theatre, and no dinner with friends. It will, though, at least be interesting to test the feature.

Regular readers will know I’m no gym rat. I do a little abs and balance work, but mostly prefer to get my exercise organically: dancing, and walking or cycling around London.

The absence of a dance workout on Apple Watch has been a notable lack for me, so it’s great to see that added. How well it copes with tango remains to be seen. While there are no actual dance events in London at present, I do have a weekly lesson and a separate practice session, so I’ll be able to test that from the weekend.

Additionally, having a specific abs workout may encourage me to do this more often!

We have a hand sanitizer dispenser right next to the front door, so already have an automatic visual reminder to do this every time we get in. However, I do have an indirect interest in this: I want to see whether another home-arrival automation has prompted any further refinement of presence detection.

We live on the 18th floor of an apartment block, so Home automations tend to be offered when I reach the lobby (if at all), not when I approach the apartment. This makes it useless for things like automatically unlocking the front door, as I certainly don’t want that happening while I’m still an elevator ride away.

So let’s see if there’s any improvement in iOS 14 and watchOS 7. I’m not holding my breath, but a man can hope.

Again, I don’t exactly have much demand for this during lockdown, but it could potentially be a really handy feature when traveling, so I’ll definitely be testing this. I am assisted in this by having a French girlfriend who also speaks Spanish.

I’m a great fan of these, albeit mostly for actual voice control.

For example, our Neato D7 robot vacuum cleaner isn’t HomeKit-compatible, but it does support Siri Shortcuts. It mostly operates on an automated schedule, starting at 07:45 each morning, but for the weekend we don’t want it to wake us, so it’s handy to have an easy means of initiating a manual clean. I created two shortcuts, Start Jeeves and Stop Jeeves, for this.

However, I do have some shortcuts I activate from the iPhone app, so I’ll take a look through them to see if any justify space as a Watch complication. I like the idea in principle at least.

I recently described some of the ways Apple technology helped a man who is quadriplegic, as well as some accessibility gaps, and he’s also given me some early positive feedback on watchOS 7.

Siri Shortcuts means I can now open and close my front door hands-free with only the watch on my wrist. Previously, I always had to ask a carer to put the iPhone in the side pocket of my wheelchair. This job will no longer be necessary going forward. It means much more independence.

The other big development is Announce Messages With Siri. I’ve just been out for a walk in the beautiful sunshine in London today and was able to message my mother with Announce Messages with Siri with only the Watch on my wrist and my Airpods. Again, previously I would always need the iPhone with me for this functionality. Not any more.

These two features are really something to celebrate in terms of accessibility. They are going to make a huge difference to my life going forward.

Those, then, are the watchOS 7 features I’m looking forward to trying – what about you? If you’ve been using the developer beta, which features have you found most useful? If you’re either trying the public beta, or waiting for the official release, which features are you most keen to try? Please let us know in the comments.