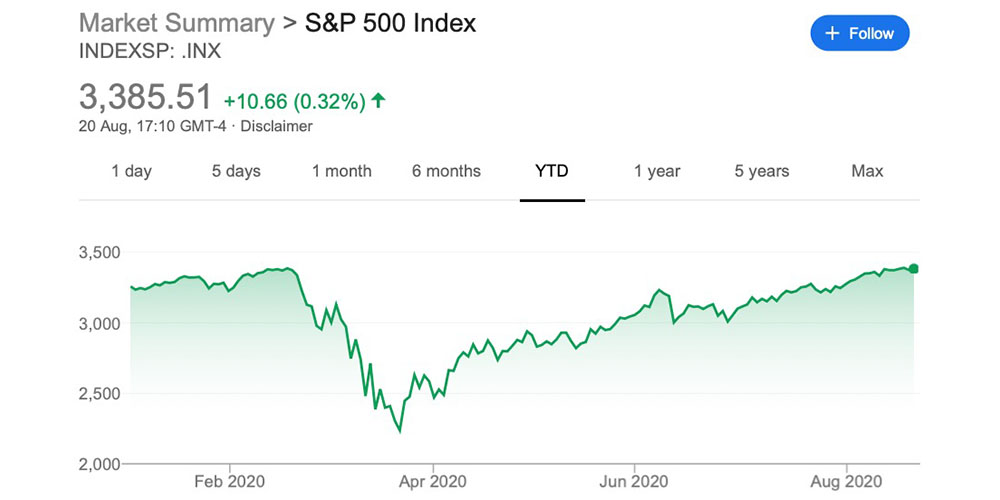 CNBC Mad Money host Jim Cramer says that strong performance by Apple and Tesla has led to a misleading impression of the performance of S&P 500 stocks.

Cramer said that the S&P has grown more than 50% since its coronavirus low in March, but this is mostly due to the performance of tech giants, with Apple and Tesla particularly influential …

[Cramer] compared the S&P 500 to a patch of grass. “When you get down into the weeds of this market, what you see is that there are a lot more losers than there are winners,” Cramer said.

Cramer’s comments come after stocks rose on Thursday despite new US weekly jobless claims hitting 1.1 million in the week that ended on Saturday […]

His basic contention is that the massive overperformance of big-name stocks like Apple and Tesla is masking the generally weak performance of most of the index. Apple this week became the first US-listed company to reach a $2 trillion market capitalization, while Tesla closed above $2,000 for the first time on Thursday […]

Cramer said: “We have a bizarre situation where some companies are doing very well but a lot of other companies are getting crushed.”

He said other stocks in the hospitality and travel sectors, like Carnival and Norwegian Cruise Line have lost significant ground. Both stocks are down more than 60% since the start of the year.

Apple this week became the first ever publicly-traded company to hit a market cap of $2T, after doubling in value in just 21 weeks.

Cramer’s remarks echo those in a New York Times report which described as “unprecedented” the rise in value among five tech giants.

Apple, Amazon, Alphabet, Microsoft, and Facebook now jointly comprise a full 20% of the total value of the stock market […]

The stocks of Apple, Amazon, Alphabet, Microsoft and Facebook, the five largest publicly traded companies in America, rose 37 percent in the first seven months this year, while all the other stocks in the S&P 500 fell a combined 6 percent, according to Credit Suisse.

Cramer was a former hedge fund manager who claims to have generated an average return of 24% per year over 14 years. In 2006, he admitted to market manipulation, saying that this could be successfully achieved using as little as $5M. He said in an interview that AAPL was an ideal stock to manipulate.

Cramer said Apple is an “ideal short,” and said if he were short the stock, he would call six trading desks and say he just got off with his contact at Verizon, who said that the company has no room for Apple.

“It’s a very effective way to keep a stock down,” he said. “What’s important when you’re in the hedge fund mode is to not do anything remotely truthful, because the truth is so against your view.”