MacBook Pro Diary: My 49-inch monitor has re-enthused me about video editing (and flying) 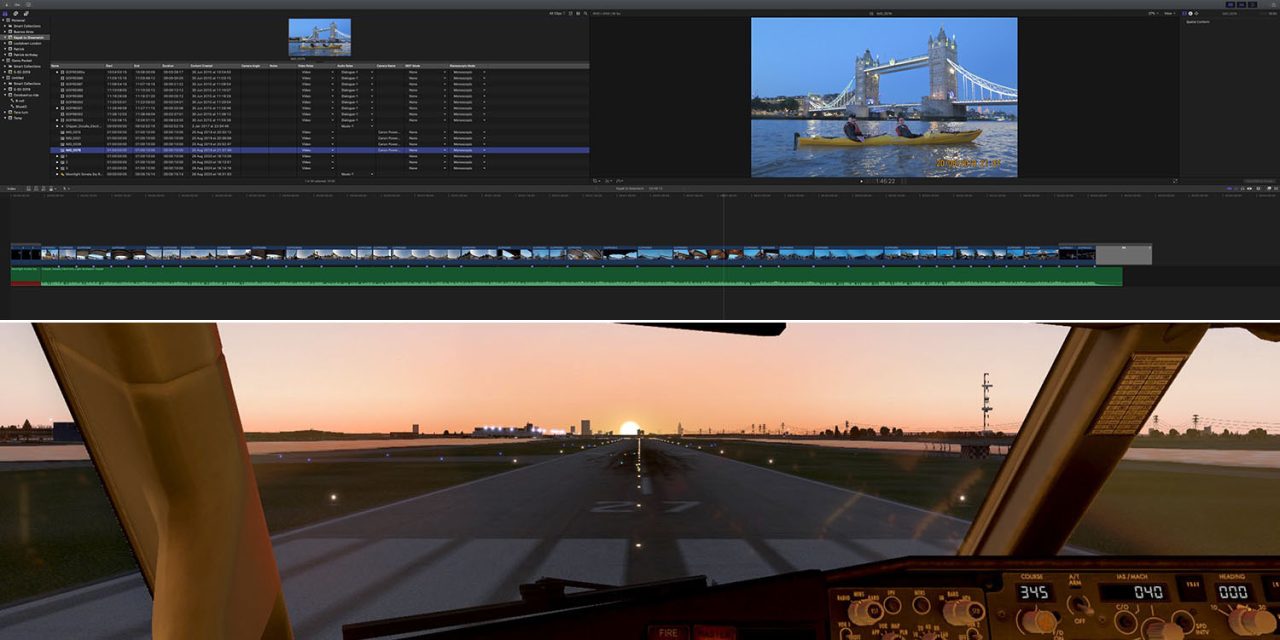 One thing that was immediately clear to me when I got my 49-inch monitor was that it was going to be a joy when video editing. But I didn’t appreciate at the time just what a massive difference it was going to make.

I should say that I’m no pro video editor. I occasionally create short clips for inclusion in reviews, but most of my videos are basic ones designed to relive memories of fun experiences. I created three short videos this month, and working on such a wide monitor truly was a delight…

One video was a fun one for my father’s 80th birthday. We took one of his favorite songs, and a whole bunch of family members scattered around the country and the world did a silly dance routine, sending the clips to me. My job was to edit it into some kind of coherent whole.

That’s the sort of project that’s often a nightmare. I did take pains to ensure everyone was shooting in landscape(!), in 1080p and at 30fps. But with everyone doing wildly different things, cutting it all together to the music was still quite a challenge – but it took way less time than I expected. (No, you definitely can’t see it!)

It was the same story with a video I put together of when we went kayaking along the Thames in London last summer, from Battersea to Greenwich. I no longer felt like I was endlessly zooming in and out to work on small clips while still having a sense of the whole thing.

For both videos, I used a tip I’d been given in one of Apple’s excellent in-store workshops on Final Cut Pro: When you’re creating a short video with a music backing, have the music be the primary track.

That seems counterintuitive. After all, the music is there just to add a bit of auditory interest, while it’s all about the video footage. If you were making a film, where you’ll use different music clips at different points, then it wouldn’t make sense. But if you’re making a <10-minute video where you’ll have a continuous music track, it makes sense for two reasons.

First, you’ll use the whole music track, while only short video clips, so laying down the music first makes that the most sensible anchor. Plus you’ll want to sync the video clips to the music, so starting with the music and placing markers on the beats, bars or phrase changes makes it a much easier process. You can see the purple markers that indicate these planned transition points. It was then just a case of slotting in each clip, choosing the bit of it I wanted, and trimming to the music markers.

Here’s a closer look at the scale:

For reference, you’re looking at an iPhone 11 Pro width chunk while the entire video is visible. OK, that was just a three-minute video, but you still have recognizable video clips of videos up to nine or 10 minutes in length with the whole thing visible.

I do of course still zoom in while working on them. One thing I found on another video was that getting the clips (photos in that case) exactly aligned to the music markers does sometimes require zooming in quite a lot — but way less than on a normal-sized monitor.

It’s a less laborious process, and a significantly faster one. I don’t make videos often enough to come up with an accurate estimate of the time-saving, but I can definitely say it’s substantial. More than that, it’s made me more enthusiastic about the process of video editing. I’ll definitely be doing it more often in future.

And yes, you can see those videos – just don’t expect professional production values! The lockdown London slideshow (all photos shot on my iPhone 11 Pro):

The other thing I’ve enjoyed about the monitor is X-Plane 11. I used to do quite a of flight simming many years ago, but gradually lost interest. It was the 49-inch monitor that had me download X-Plane after a friend asked to see what it was like, and I have to say, the experience is pretty stunning!

I opted for the bottom-of-the-range CPU and GPU spec with my 16-inch MacBook Pro for reasons explained here, and this was the first time I (briefly) regretted it, as it limits the app to medium-res graphics. Mostly that means only a handful of real-world buildings are present, with the rest of the city represented in generic form.

But given I’m not back in my days of trying to accurately replicate the experience of flying a Cessna 172, and am instead simply playing at being an (incompetent) airline pilot, it’s more than good enough to be fun.

I added a Logitech Extreme 3D Pro joystick, as that’s what everyone recommends as the best entry-level joystick for flightsims, and I couldn’t possibly justify any of the full-on yoke, throttle and pedal setups for something that’s just a bit of fun a couple of times a month. Just as I couldn’t have justified a higher GPU spec even if I’d known at the time that I’d want to use X-Plane.

Here’s a couple of quick video clips to give a sense of the perspective you get on the 49-inch monitor. A highly illegal take-off from London City Airport in a standard Boeing 737, which is definitely not rated for short runway use, and a legal if wobbly landing at JFK.

Obviously watching them on a normal monitor won’t provide a sense of scale, but you at least get to see just how much of the world you can see at once.

Of course, the flight-sim world right now is excited about the new Microsoft version. This is Windows-only, sadly, but a friend does have it running on his Mac under Boot Camp, so I’ll be following his experiences with interest!

I am, then, still loving my Dell 49-inch monitor. It’s officially my favorite ever Mac accessory.