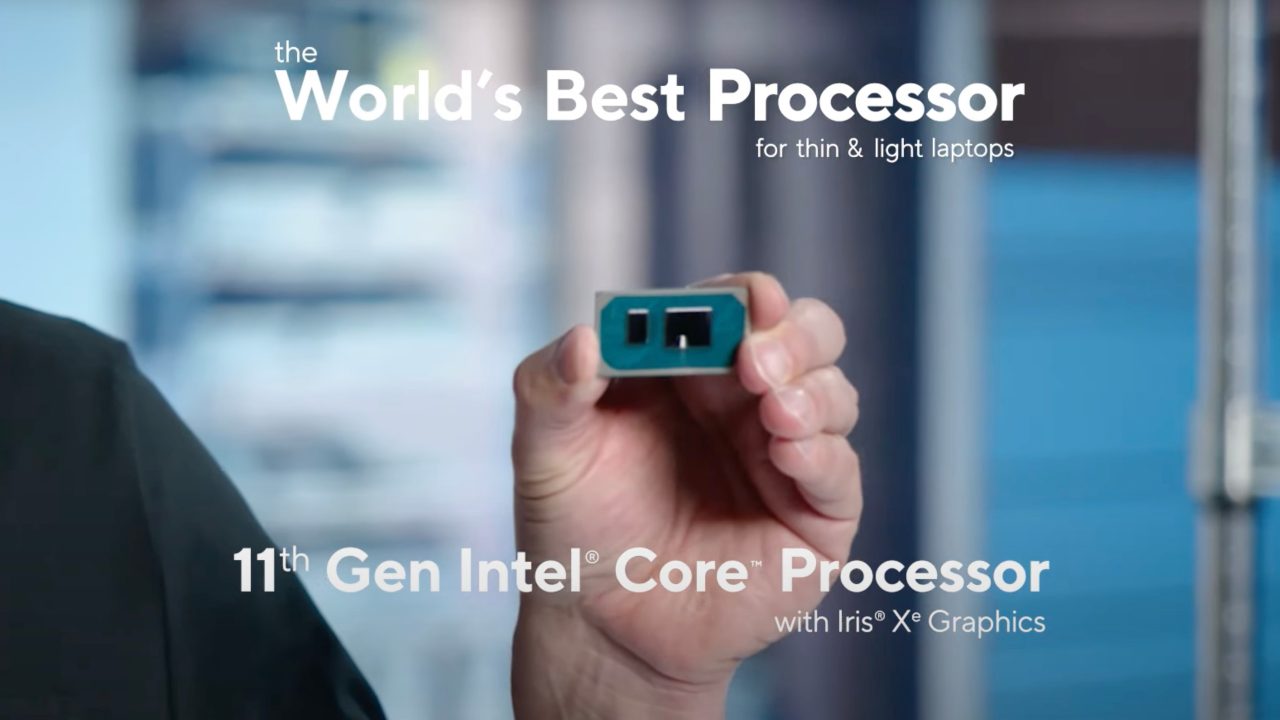 We’re closer than ever to the release of Apple’s first Mac powered by Apple Silicon processors. Amid that transition, Intel has unveiled its new 11th generation Tiger Lake CPUs, touting them as the “best processor for thin and light laptops.”

Intel has previewed its 11th generation Tiger Lake processors in the past, but it offered up more details during an event today. The chipmaker also said that the new Tiger Lake CPUs will be available in laptops sometime this fall, bringing significant performance improvements over the previous Ice Lake processors.

Intel touts that the 11th generation Tiger Lake processors, which are still built on the 10nm node, feature its new “Xe” integrated graphics as well as support for Thunderbolt 4 and WiFi 6 connectivity. The goal of the new processors, Intel says, is to offer dramatic performance improvements at lower power consumption, and increasing battery life.

As the Verge explains, Intel’s Xe integrated graphics will offer up to twice the performance. There’s also a new built-in AI engine.

Intel is betting big on its new integrated Xe graphics, which it promises will offer up to twice the graphics performance, and which Intel says will offer more substantial benefits than just raw core count increases (an area that, coincidentally, AMD currently leads Intel in). A demo shown during Intel’s announcement showed an 11th Gen chip offering similar or better graphics performance than a 10th Gen chip working simultaneously with an Nvidia MX350 GPU.

In total, Intel has debuted nine different Tiger Lake chips ranging from Core i3 processors (which stick with Intel UHD graphics) to Core i7 processors with Iris Xe graphics. The power maxes out at 28W, Intel says.

The 11th generation Tiger Lake processors will likely be the first processors from Intel that Apple does not adopt due to its transition to Apple Silicon CPUs. Just last month, Apple upgraded the 27-inch iMac, which is powered by 10th generation Intel processors. The 2020 iMac is very likely to be the last Intel-powered Mac to debut, though that’s not guaranteed.

The Intel Tiger Lake chips are designed for thin and light laptops, which coincidentally could be the first Apple laptops to make the switch to Apple Silicon. A new report this week indicated that the 12-inch MacBook could return with Apple Silicon inside, packing 15 to 20 hours of battery life.

Intel has also debuted a new logo (via the Verge):

Despite no support from Apple, Intel says you’ll be able to find Tiger Lake CPUs in more than 50 laptops this fall from companies such as Acer, Dell, Lenovo, and Samsung.