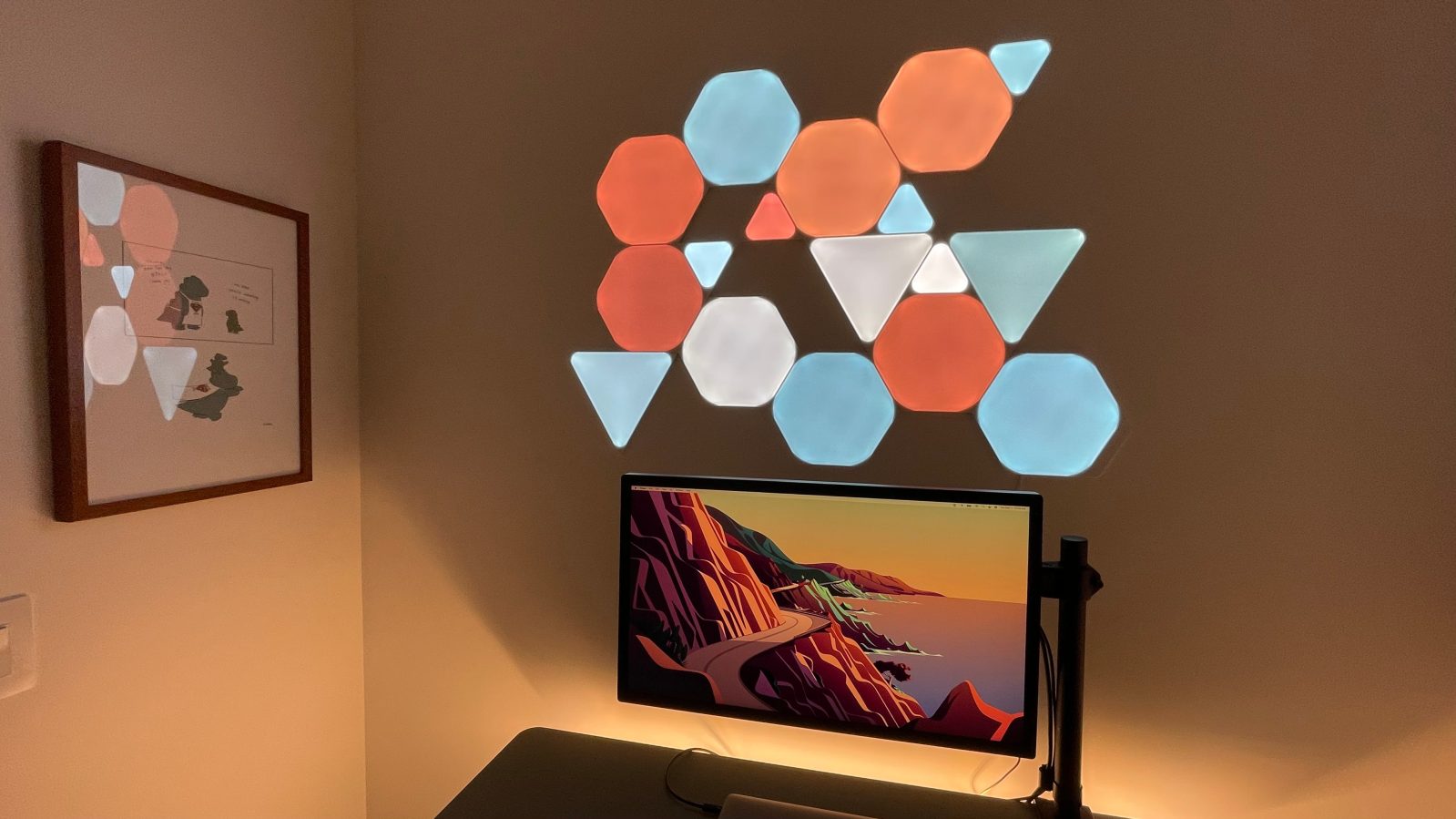 Nanoleaf debuted its latest smart light panel system this year with Shapes. The first option was Shapes – Hexagons and Triangles and Mini Triangles have arrived as well. As you’d hope, all three of the Nanoleaf Shapes light panels work together to make a flexible system that lets you get really creative. And just like Nanoleaf’s other products, Shapes are HomeKit compatible with no hub needed.

All of the Nanoleaf Shapes smart light panels are great to use on their own, but I think you get a really interesting experience when combining Hexagons, Triangles, and Mini Triangles. Naturally, when using all three, you have more room to be creative with crafting a custom design. But there’s no right or wrong way to use these modular lights and there are a lot of options based on your taste and budget.

Important note: The previous-generation Nanoleaf Triangles are not compatible with the Shapes Triangles, Mini Triangles, and Hexagons.

Nanoleaf Shapes use rounded edges for the light panels. I think this provides the best aesthetic but keep in mind that it means the light doesn’t completely fill in the entire area of each panel. That won’t be surprising to owners of the previous generation “Light Panels” that used hard edges with a triangle of non-lit space in each corner. But it’s good to be aware of what to expect.

Overall I think the new rounded-edge design that comes with Shapes Hexagons, Triangles, and Mini Triangles is definitely an improvement. More of the surface area is lit up compared to the previous-gen Light Panels and I like the visual of the softer rounded edges too.

Shapes Hexagons and Triangles have 6 connection points on each light panel to firmly connect to each other and the Mini Triangles have 3. They easily snap together and the mounting system itself is well designed and uses a 3M Command adhesive that’s easy to use and also comes off the wall with a pull without damaging paint, etc.

Set up is easy with these hub-free HomeKit light panels. For the design part, you can lay them out on a desk/counter or your floor if you want to play with ideas before committing to a layout. You can easily remove the panel adhesive (pull down slowly and firmly) if you make a mistake and need to try again, but it’s ideal to save the extra adhesives you get for future changes rather than the initial set up. Nanoleaf also includes some pattern inspiration in the box.

When you’ve decided on your layout, you can pick where you want to put the included controller that attaches to any of the light panels.

Setting up these hub-free HomeKit light panels is really simple. You can either do it through the Home app or with the Nanoleaf app.

The first thing I want to say is that LED light panels are tough to photograph. Haha, ok, but really, what you should expect is the panels to look better than what you see in my photos but not as perfect as the photos on Nanoleaf’s website.

Specifically, you’ll notice some bright spots where the actual LEDs are placed with certain colors. Again, this appears more pronounced in my photos but if you look closely you can see the color/lumen variations on the images on Nanoleaf’s website too. You may also see some slight differences in the color saturation across a panel but again it’s not as noticeable as my photos make it look.

Here’s a side by side of a photo of my Shapes setup and one from Nanoleaf’s website:

You can see a bit of the effect in Nanoleaf’s image in the white hexagon on the right (in the corners). Looking at mine, you can see it’s more visible and also the there’s the color variance with some of the blue hexagons and a bit with the red/pink ones.

However, here’s another shot of mine where the issue was hardly perceptible in real-life (a touch more noticeable in the photo).

I wouldn’t have been anywhere near as dialed into this if I hadn’t been focused on trying to photograph these light panels. And to be honest, after a few days using Shapes, I pretty much forgot about the slight variances altogether and I don’t feel it diminishes the light panels. On the whole, I think Nanoleaf Shapes deliver a great visual experience.

When it comes to controlling Nanoleaf Shapes, you’ve got a lot of options. Of course many will rely on Siri and the Home app/Nanoleaf app. But you’ve also got customizable touch control of the light panels themselves and the physical control bar attached to one of your lights.

And for those that want to take things a step further, you can control the basics of the light panels and more by swiping up, down, left, and right on them. But you can even customize the touch controls with single-taps, double-taps, or long-presses on light panels.

You can set the “Touch Gestures” and “Touch Actions” in the Nanoleaf app:

Shapes come with a lot of great scenes pre-loaded. You can find them in the Nanoleaf app and they’re also automatically imported to “Favorite Scenes” in the Home app.

It’s easy to create new basic lighting setups or more involved scenes in the Nanoleaf app. And there’s a simple favoriting system to easily keep track of your most used ones.

You can also browse scenes made by others in the “Discover” tab (cloud icon) in the Nanoleaf app. Just tap the download icon to use them with your Shapes light panels.

Nanoleaf’s goal with the Shapes lineup was to “give users the complete design freedom to create their most personal lighting experience yet.” After spending some good time with these HomeKit light panels, I think they accomplished their goal from both a hardware and software perspective.

You’re getting a really fun and functional light panel system with lots of options thanks to the Hexagons, Triangles, and Mini triangles. Then on the software side, you’ve got lots of customizability from making your own scenes and setups, grabbing scenes from other users, and solid HomeKit functionality (Google Assistant and Alexa support included too).

To top it all off, you’ve got about as many ways to control these light panels as you could ask for with the added bonus of the touch gestures, taps, and long-presses.