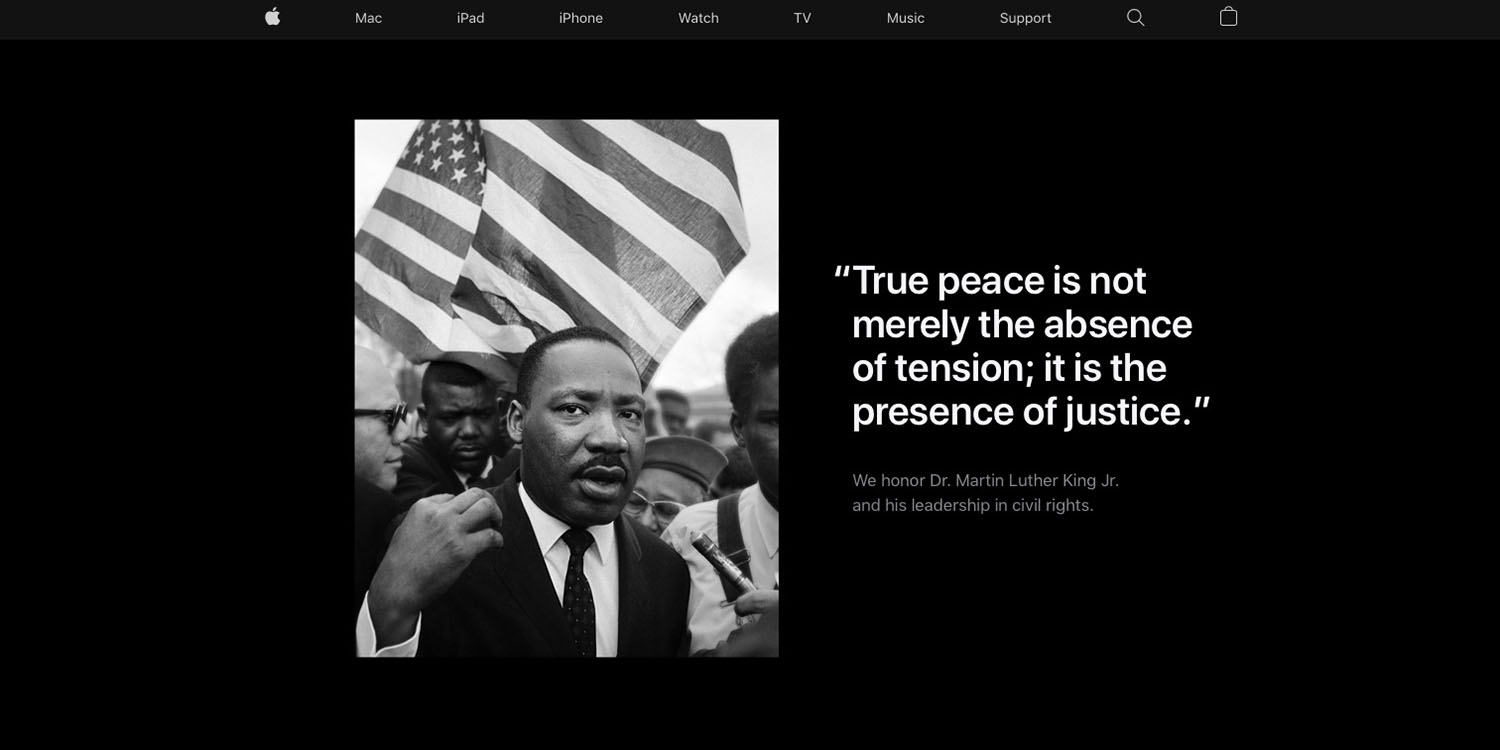 Apple continues its annual tradition of devoting its home page to celebrating Martin Luther King Jr. Day with a single-sentence quote. This year’s quote is from Stride Toward Freedom, King’s memoir of the Montgomery bus boycott.

True peace is not merely the absence of tension; it is the presence of justice.

The bus boycott began with a simple action by Rosa Parks, and ended in a groundbreaking U.S. Supreme Court ruling …

Sparked by the arrest of Rosa Parks on 1 December 1955, the Montgomery bus boycott was a 13-month mass protest that ended with the U.S. Supreme Court ruling that segregation on public buses is unconstitutional.

The bus boycott demonstrated the potential for nonviolent mass protest to successfully challenge racial segregation and served as an example for other southern campaigns that followed. In Stride Toward Freedom, King’s 1958 memoir of the boycott, he declared the real meaning of the Montgomery bus boycott to be the power of a growing self-respect to animate the struggle for civil rights.

Parks, of course, achieved fame by refusing to give up her seat to a white passenger, as the law required at the time.

It seems hard to imagine now, but one of the reasons King was elected to lead the campaign, said Parks, was that he wasn’t well known.

The advantage of having Dr. King as president was that he was so new to Montgomery and to civil rights work that he hadn’t been there long enough to make any strong friends or enemies.

King quickly demonstrated the mastery of rhetoric for which he became world famous.

The New York Times has a short video op-ed with King’s son Martin Luther King III in which he says we must remember that his father’s work was about more than just racial justice.

I think if my father saw the issues of poverty and income inequality that exist today he would be greatly disappointed.

Ahead of the day, Apple expanded Apple Maps with new VolunteerMatch integration, a partnership designed to allow users to easily find ways to volunteer in their communities.

This is a quote from King’s final book, Where Do We Go From Here?, which reflects on the future of the civil rights movement.