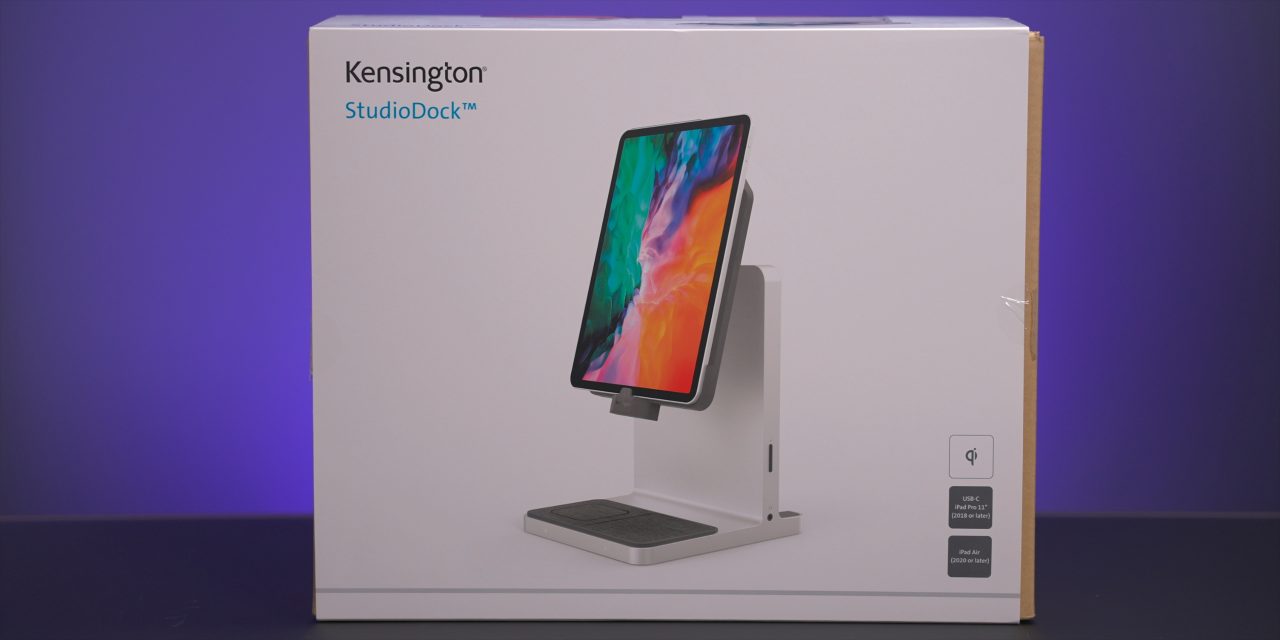 The Kensington StudioDock is a unique dock accessory for the iPad Pro (2018 and 2020 models) and the iPad Air (2020). It’s geared toward quickly providing users with a vast array of I/O options, while giving the iPad a more desktop-friendly form factor.

Starting at $379, the Kensington StudioDock is far from cheap, but it gets lots of points in my book for being willing to do something unique, and for providing a genuinely useful desktop setup for dedicated iPad users. Watch our hands-on video for the full unboxing, and be sure to subscribe to 9to5Mac on YouTube for more videos.

The Kensington StudioDock arrives in a fairly large and heavy box, hinting at how solid the unit is. Inside the box, you’ll find the StudioDock, power adapter, multiple regional power cables, and several pieces of documentation.

The StudioDock is primarily comprised of aluminum, but also features a black plastic panel on the rear where the majority of the I/O is housed. The unit features a weighted base with generously sized rubber feet on the underside to keep it firmly planted on your desk, even when mounting and dismounting an iPad.

The floating area where the iPad mounts into place is also plastic with a soft-touch magnetic surface. At the bottom of the mount rests a USB-C connection, which will not only fast-charge the iPad, but also facilitate communication with the plentiful I/O.

The iPad mount can transition between portrait and landscape mode by rotating 90 degrees, and locks into place in both orientations. In addition, the mount pivots up to 120 degrees, lending a high degree of flexibility to desktop iPad users.

Kensington did a good job nailing the basics of the StudioDock’s design. For example, the iPad mount area features a cutout for accommodating an Apple Pencil magnetic connection, and the direction it rotates when orienting into landscape mode is in the direction that places the Apple Pencil on top. The unit also features a cutout area so that the camera module isn’t blocked, and the sides of the mount are low-profile enough to keep the speakers and buttons unobstructed.

The StudioDock features a plethora of I/O options scattered around the unit. There are ports on the back, left, and right of the dock. The majority of I/O is located on the rear, allowing cables to maintain a measure of tidiness while on a desktop surface. Along with the 20V DC power input via a barrel-style connector, the rear of the StudioDock also features three USB-A 3.2 Gen1 (5Gbps) ports. These ports are great for connecting hardwired peripherals like mice and keyboards, USB thumb drives, etc.

Flanking both sides of the three USB-A ports lie two essential connectors — Gigabit Ethernet and HDMI 2.0. Gigabit Ethernet will ensure a steady network connection for your iPad, and the HDMI port supports one display for up to 3840×2160 output at 60Hz.

On the left side of the StudioDock, you’ll find the unit’s power button, along with a USB-C 3.2 Gen1 (5Gbps) port. This port is great for connecting USB-C devices, and can facilitate much faster charging thanks to its 5Vx3A and 9Vx2A power output configurations. The USB-C port is great for connecting external drives that need additional power, or for fast-charging devices via USB-C.

The right side of the dock includes the 3.5mm headphone input, and the UHS-II SD 4.0 reader. The SD Card reader allows you to quickly dump the contents of an SD Card, which may contain large photos or videos, to the iPadOS Files app.

But that, of course, is not where the I/O ends with the StudioDock. There are also two wireless Qi chargers conveniently located under the iPad mount. The right-side 7.5W charger is geared toward recharging your iPhone, while the left-side charger features a slower 5W connection that’s more appropriate for AirPods.

The Kensington StudioDock provides a full-featured desktop docking solution for iPad users. Its wealth of I/O options makes it so that you can connect an iPad, and more or less have a full desktop workstation at your disposal.

Accessories like hardwired-keyboards, USB SSDs, SD Cards, and external displays, can be ready and waiting for you to attach your iPad. Removing the iPad from the StudioDock is just as easy, quickly allowing the tablet to transition into portable workstation mode.

If you’re a prolific iPad user who uses Apple’s tablet as a main computer or laptop replacement, then the StudioDock is probably the best docking station option available. Not only is it handy for the sheer amount of I/O that it presents, but it also comes with convenient 120-degree tilt and 90-degree rotation options as well.

It would have been handy if the dock could pivoted side to side, or if it featured vertical telescoping movement, but at that point you’re basically asking for a dedicated monitor. And that brings me to the most disappointing thing about the StudioDock, or for that matter, any dock that affords external display connectivity with iPad — iPadOS remains extremely limited when its comes to external monitor support.

A few apps, like iMovie, LumaFusion, Keynote, and Netflix, support external displays in limited fashion, but the list of apps that support external monitors is nowhere near where it needs to be. As of now, unless an app specifically supports external display connectivity, all content is mirrored to an external display, which is a waste of the added real estate. Simply put, iPadOS sorely lacks the extended desktop support that macOS users enjoy.

At the very least, iPadOS needs a way to run two apps side by side on the internal display and external display simultaneously. Although no fault of its own, the half-baked external monitor support is the StudioDock’s most glaring flaw.

Here’s hoping that the hardworking engineers in Cupertino are able to bring greatly enhanced external display support to iPadOS 15. If they do, then hardware like the Kensington StudioDock becomes a whole lot more valuable. But it’s also worth noting that some users may find the $379.99/$399.99 asking price a bit too much. Casual iPad users, in particular, will balk at such a price point, but prolific iPad users who regularly use their tablets as their main personal computers, will likely see value in such a well-built I/O-laden package.

Would you consider the StudioDock for your 4th-gen iPad Air, or USB-C-enabled iPad Pro? Sound off down below in the comments with your thoughts.