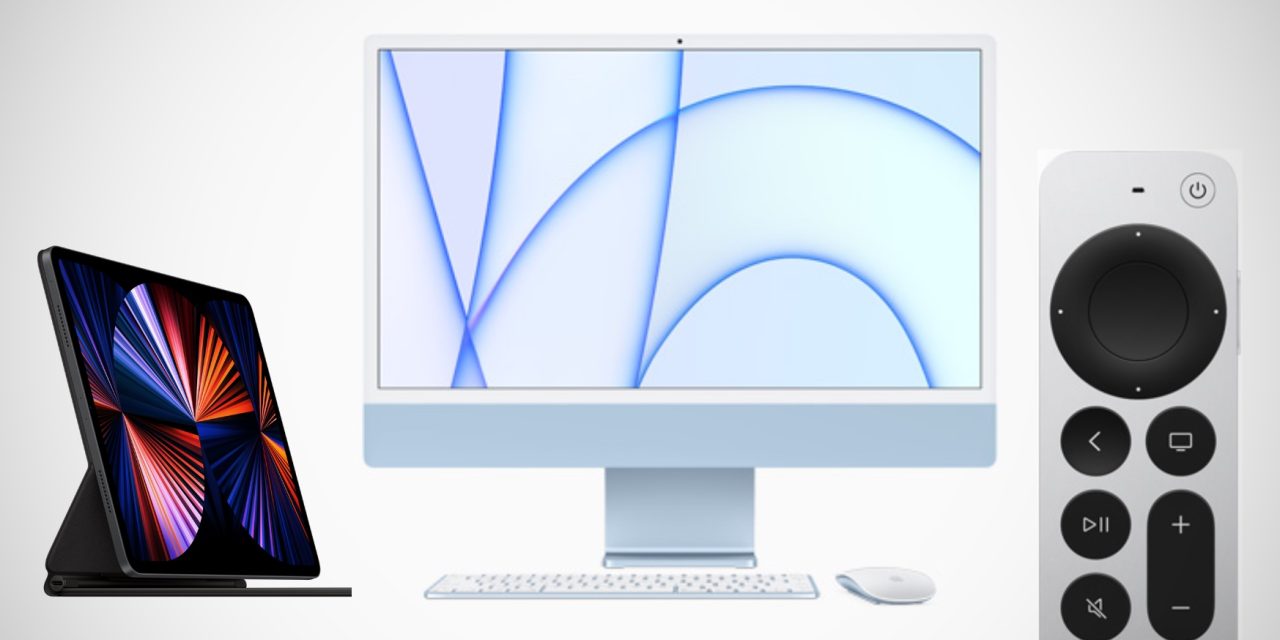 Update: The Apple newsroom source code is also floating a May 21 date. Image after the break …

According to multiple sources, including Jon Prosser who has a good track record of nailing these release dates, Apple will release the new iMac, iPad Pro with M1 and the upgraded Apple TV 4K with revamped Siri Remote on May 21.

Apple previously announced these products at its April product event, only saying that they will ship in ‘the second half of May’. These devices go up for preorder tomorrow.

The May 21st date was first reported by Prosser a few days ago, with an implication that the 11-inch would launch one day later on May 22nd. Prosser has updated his original comment to say that the 22nd date was inaccurate.

Since then, other retailers have also started reporting a May 21 release date. For instance, the product pages for the 24-inch iMac on the website of UK retailer (and Apple authorized reseller) John Lewis informs customers that the new iMac models will be available then.

Today’s Apple Newsroom press release reminding customers about tomorrow’s preorders also seems to have accidentally referenced the May 21 date in its source code. In the website HTML for the press release in the UK, it reads:

Obviously, this copy has not seen final sign off as the purple iPhone 12 and the AirTag arrive on April 30, not May 21. Nevertheless, it provides one more confirmation of the May 21 date for the 2021 iMac, iPad Pro, and Apple TV 4K.

The new iMac takes advantage of the efficient Apple silicon with an all-new chassis design that shrinks the thickness of the computer down to a uniform 11 millimeters. The bezels have been reduced, allowing Apple to offer a 24-inch display without making the iMac that much larger than the 21-inch model that it replaces. The iMac is available in seven vibrant colors.

The new iPad Pro adds an M1 chip for enhanced compute and graphics performance and 5G connectivity. it now sports a Thunderbolt port to be compatible with an even wider range of accessories, and can communicate at higher bandwidth accessories for the first time including the ability to drive the Apple Pro Display XDR at full resolution. The 12.9-inch model also features a mini-LED display (Apple brands it Liquid Retina XDR), offering OLED-like contrast and brightness levels.

The new Apple TV 4K has received a spec bump internals upgrade, now featuring an A12 chip. This means it can now display high frame rate 4K HDR content. However, the biggest change with the new Apple TV is the revamped Siri Remote. The new remote features a circular clickpad combining a four-way D-Pad with touch gestures, new buttons for mute and power, housed in a more durable aluminium enclosure. The new Siri Remote will also be sold separately for $59 and is compatible with all Apple TV that run tvOS.

All of these products can be preordered tomorrow at the Apple Store. Officially, Apple is still only promising ‘second half of May’ availability but it seems likely that the 21st date is accurate.

The other new things announced at Apple’s Spring Loaded event was the AirTag tracker and the purple iPhone 12. These products opened for preorders last week, and customers should start receiving them tomorrow.