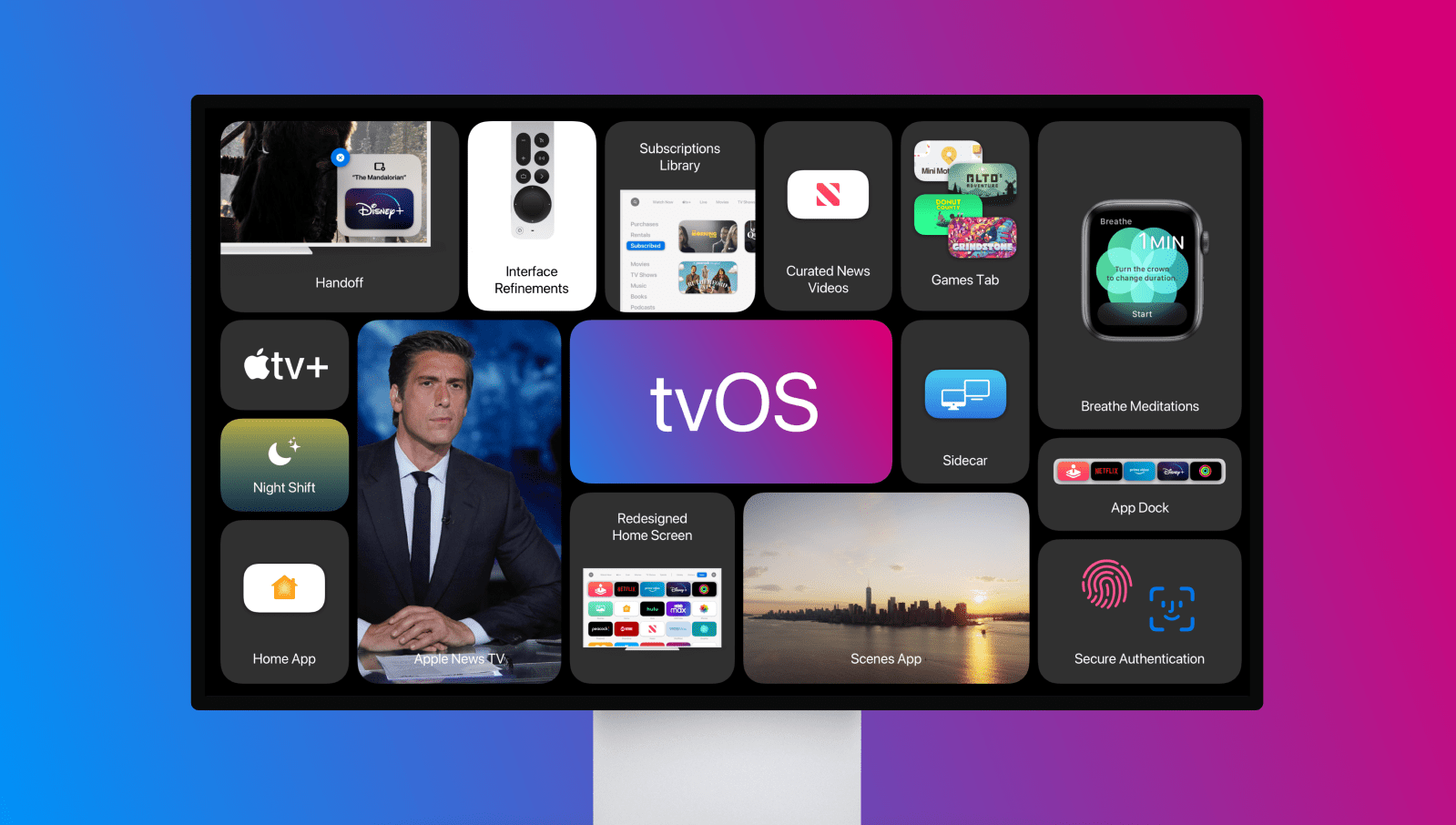 tvOS is missing a lot of tent pole features of the Apple ecosystem. It’s an excellent foundation, but it could use a lot of work. It often feels like tvOS gets left behind when Apple is working on its annual platform updates. It’s time for it to get a chance to shine.

The first part of tvOS that you see is the Home Screen. Apple’s kept it fairly simple for a few years now. It has a large header space for dynamic content and a sea of app icons below it. In fact, it’s been that way since 2012 before Apple officially branded Apple TV’s software as “tvOS.”

There are a couple of ways Apple could improve upon the Home Screen on Apple TV. We can look to other popular smart tv platforms and even the modern iOS Home Screen with widgets for some inspiration.

Apple has teetered between prioritizing the TV app and the Home Screen on Apple TV for a few years now. I think it’s time to combine them into one system. Across the top, you’d get all of your key categories in addition to a few new ones: on the far left, a search button, and on the far right, a settings button.

In the middle of the Home Screen, the dynamic content header would still be present. But Apple could use it to show more types of information, including news. It also should be detached from the app that’s currently selected. Rather, it should show curated updates from the iTunes team. Below your dock of five chosen favorite apps, you’d find all of the great content in the TV app’s watch now tab.

To access all of your apps, you’d just flick over to the apps tab. You could customize your dock with your five favorite apps in this tab. All of your other apps would be right below the dock. Ideally, you wouldn’t need to use the apps tab, instead just jumping directly into content from the watch now tab.

Additional tabs include a dedicated place for all of your games and a new live tab for content that’s streamed live over the web.

The library tab is a critically important part of the tvOS experience. But it could be expanded upon in a couple of ways. First off, I would love to see larger artwork for purchases. In terms of categories, I’d love for Apple to break things out a bit. Lots of content that folks watch these days isn’t actually purchased, so it would be great to be able to bookmark shows and movies from platforms you subscribe to.

Services that integrate with the TV app would be allowed to show favorite shows and movies right in the library alongside your purchases. There’d also be a new podcasts category to display episodes of shows you subscribe to.

One thing that’s always felt de-emphasized on tvOS is news. Apple News is such a perfect service to bring over to the platform. Videos could be curated by the Apple News team from articles and served up in a neat feed. Those who subscribe to live news services could access ones that choose to integrate with Apple News.

Apple News Audio and Apple News+ exclusive stories could also be included in a tvOS app. It would introduce a whole new avenue for Apple News content.

Apple TV screensavers are a staple of the platform. Everyone loves the beautiful landscapes, cityscapes, and nature videos shot by Apple. A new ‘scenes’ app could let you play these for extended periods of time in your home, in an office, in a lobby, wherever you want to.

You could save your favorites, set timers, and even have the scene show things like a clock. Newer Apple TV models could even show simultaneous streams of different streams on the selection menu.

The new iMac shows that Apple can indeed implement wireless Touch ID. While the new Apple TV remote doesn’t have a Touch ID sensor on it, it certainly could in the future. But Apple could introduce more secure authentication right away with special secure connections to your other Apple devices with Touch ID and Face ID.

When you go to sign into an app or make a purchase, your Apple TV should ask your iPhone, iPad, or Mac to do the authentication work. You could scan your face or fingerprint on your other devices to pay for things quickly and securely.

Another feature that could integrate with your other Apple devices is handoff. It’s an obvious feature to bring to Apple TV, and it’s frankly bizarre that it hasn’t already been brought to the platform. When watching a show, movie, playing music, or a podcast, the Apple TV could recognize it and offer you a dismissible menu to transfer the progress to your television seamlessly.

It could work the same way it does between Macs and iOS devices or even like it does with proximity sensing with HomePod, where you can pass audio between devices.

What do you think about these ideas for tvOS? Let us know in the comments below!