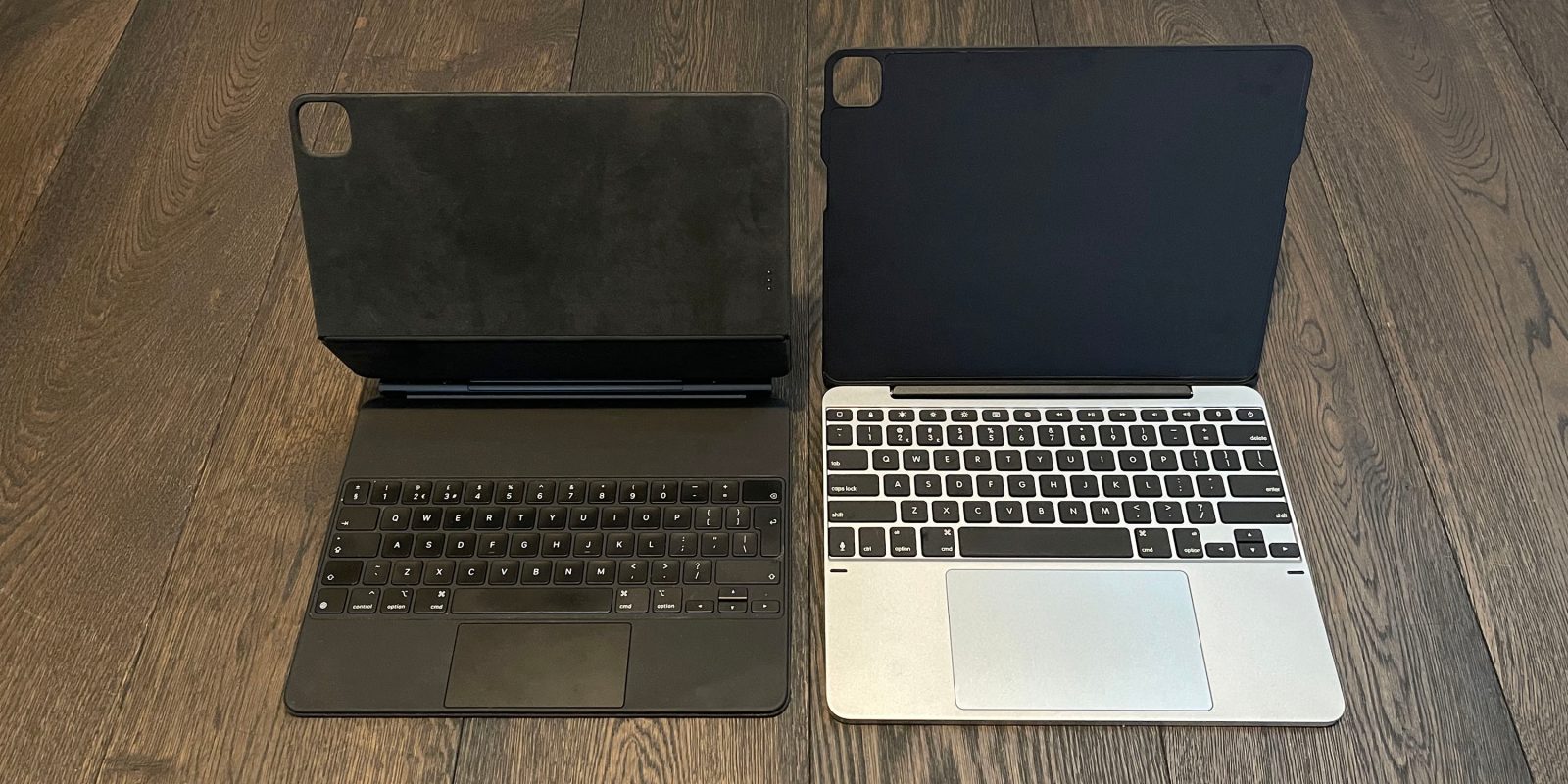 When it came to trying the upcoming Brydge Max+ keyboard for the 12.9-inch iPad Pro, it seemed most sensible to write it up as a head-to-head against the Apple Magic Keyboard. Both are premium-priced keyboards with integrated trackpads, and are essentially chasing the same user demographic.

I’ve long been a fan of Brydge keyboards, and have used them with all my iPads – but have so far been using Apple’s Magic Keyboard with my 12.9-inch iPad Pro…

Brydge keyboards for iPad always struck me as the keyboards Apple should have made. Made from anodised aluminum, both look and feel are MacBook-like.

The one drawback was always the way the keyboard attached to the iPad – or, more accurately, how the iPad attached to the keyboard. In older models, this was via two aluminum prongs, which needed rubber covers to protect the iPad against scratches. Later models used smaller corner prongs that initially proved challenging, but Brydge solved the problem in the production models. Both made the iPad a little awkward to attach and detach.

With the latest model, however, Brydge is adopting the same magnetic attachment approach of Apple’s Magic Keyboard.

With the devices closed, looked at from above/the front, there’s little to choose between them. Both have a very bland-looking black rubberized cover that isn’t going to win any awards for, well, anything. Unless, that is, you opt for the white version of the Brydge, which is course has a very different look.

It’s a different story from the rear and side, however, as the Brydge keyboard looks very much like a laptop, while the Apple one looks, frankly, cheaper.

With the keyboards open, the Magic Keyboard of course enjoys that cool “hanging in the air” look, but the Brydge definitely wins out for me, with the anodized aluminum looking way more premium than the plasticky surround of the Apple.

Although the actual keycaps are very similar in size, the Brydge ones are better spaced – and they have a row of function keys missing from the Apple keyboard.

Finally, the Brydge trackpad is much larger than Apple’s, measuring 6.25 inches diagonally versus 4.25 inches.

The Brydge keyboard has a little more travel, and the springs are stronger, giving more resistance. It’s really like the classic Apple chiclet keyboards of old versus the current-generation ones.

Some people have a strong preference for one over the other, and if you fall into this category, you’ll know which you prefer. If you’re a fan of older Apple keyboards, you’ll prefer the Brydge; if you like the current MacBook ones, you’ll instead favor the Magic Keyboard.

Personally, I’m pretty adaptable when it comes to keyboard feel, so don’t have a strong preference – though I’ve become used to the modern Apple ones.

I do like a large trackpad, so the Brydge wins out on size, though I prefer the smaller travel of Apple’s.

I switched back and forth between the two, and have already noted above the differences in feel.

The Brydge keyboard has a Siri button bottom-left, and I’m not a huge fan of that as I found I would occasionally catch it accidentally when using the left shift key. Conversely, I greatly prefer the convenience of dedicated function keys.

The Brydge MAX+ tilts back further than the Magic Keyboard, which can be a benefit when using it in some confined spaces.

There is a significant weight difference, the Apple keyboard coming in at 706g (25 ounces) against 1,000g (35 ounces) for the Brydge. However, once you add the substantial weight of the iPad itself, I can’t really say I was particularly aware of the difference when carrying them. The Brydge keyboard is also thicker than the Apple keyboard, which might be an issue if you are packing tightly.

The Magic Keyboard has one big advantage: There’s no need to pair it, thanks to the Smart Connector. The Brydge, in contrast, relies on Bluetooth. That said, pairing is very quick, so it’s not a particular issue in use.

The other big difference is power. The Apple keyboard draws its power directly from the iPad, so never needs to be charged. The Brydge keyboard, in contrast, has its own battery, and needs to be charged via the USB-C port. Brydge claims 40 hours with the backlight permanently on, and up to three months without the backlight, based on a generous two hours’ use per day.

In most situations, that’s a win for Apple, as it’s one less thing to think about. But if you’re pushing the battery life of your iPad, then it’s obviously better not to be reducing it by powering the keyboard too.

Based on previous experience with Brydge keyboards, I charge them once every one to two months, so the biggest issue is actually remembering to do so.

You’ll have noted a lot of, “Well, the Apple keyboard is better for this, while the Brydge one is better for that” comments in my remarks – and that makes it hard to definitively recommend one over the other. Some of it will depend on personal preferences, like maximum battery life versus the convenience of charging one device rather than two. Other issues are trade-offs, like premium look and feel over weight.

Based on my limited use so far, I really haven’t been able to choose between them! I’ll update if and when that changes, and mention it in a future iPad Pro Diary piece as and when I next write one. If you need to make a decision in the meantime, I’d say the factors most likely to influence your choice are power source, function keys, and aesthetics versus thickness and weight.

The Brydge 12.9 Max+ is available for pre-order, in a choice of Silver, Space Gray and White, priced at $249.99. Shipping is set to take place later this month.