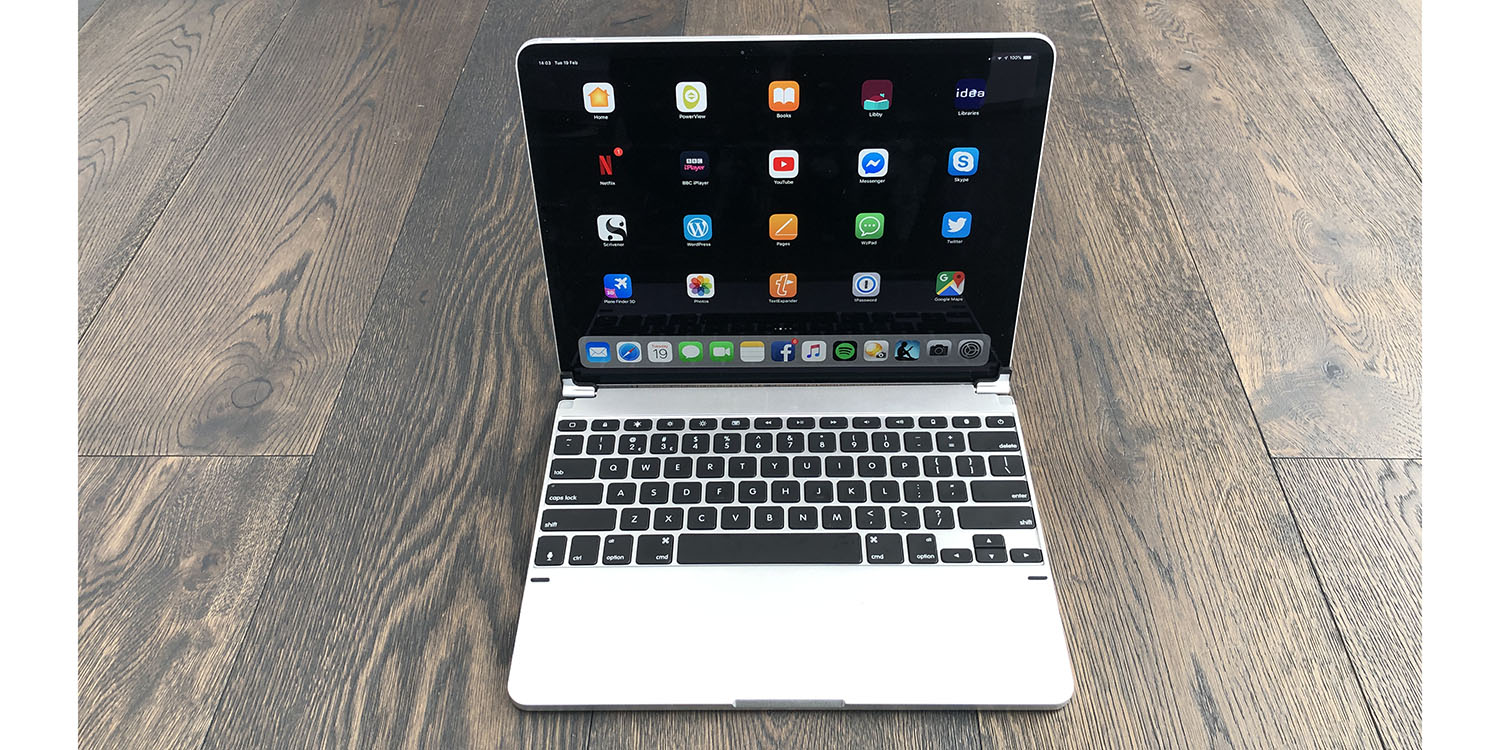 I can never understand how Apple can make such fantastic tablets, and such terrible keyboards for them.

Ok, perhaps ‘terrible’ is an exaggeration, but the latest Smart Keyboard Folio for the 12.9-inch iPad is – like the first – a distinctly average typing experience, and a pretty cheap-looking hunk of plastic …

It’s particularly inexplicable to me when Brydge has long since shown how to do it right. Anodised aluminum, not plastic, and a typing experience which mirrors that of the pre-butterfly MacBook keyboards.

Slot your iPad into one, and it really looks like a MacBook. Indeed, many times I’ve had people on planes and in coffee shops ask me which MacBook it is, and they’ve been surprised to learn that it’s an iPad plus Bluetooth keyboard.

I’ve been a fan ever since first using one with my iPad Air 2, and have always felt this was the keyboard Apple should have made.

I tried the model for the original 12.9-inch iPad, and said then that it would have been my choice had I not sent that iPad back, deciding it was just too large. So when the company teased a redesign for the latest iPad Pro models, I was keen to get my hands on one.

I got the chance to do that when the company lent me a prototype for a week.

If you’re familiar with previous Brydge keyboards, there are few surprises. With three changes I’ll get to, this is very much the Brydge experience you know and love. A solid hunk of anodised aluminum in a choice of silver and space gray, black backlit keys with white text, and overall a very MacBook look.

I used to say that Brydge keyboards feel like MacBook ones. That’s no longer the case – not because Brydge has changed the feel, but because, of course, Apple has. The Brydge feel is now a lot softer than my 2016 MacBook Pro with Touch Bar.

I’m pretty adaptable when it comes to keyboards. I used to be a big fan of mechanical keyboards, with the Cherry MX Blue my favourite switches. These days, I frequently switch between MacBook Pro, Apple Magic Keyboard and Brydge keyboard, and am happy with all of them.

However, I must say that – reliability issues aside – the very short-travel butterfly keyboard feel has grown on me. So in an absolutely ideal world, I’d look to Brydge to mirror this. However, I recognize that views of the butterfly keyboard are very polarized, so Brydge is probably wise sticking to its tried-and-trusted feel.

The keyboard of course matches the dimensions of the iPad. For both 11- and 12.9-inch models, the keyboard is fractionally over a quarter of an inch thick. The smaller model weighs 1.14lbs, the larger one 1.51lbs. So pretty hefty, but that’s the price of aluminum rather than plastic.

Battery-life is specified as a full year at two hours per day.

Brydge’s biggest challenge this year has been the greatly reduced bezels on the latest iPads. This means that its previous prong design to attach the iPad to the keyboard was no longer feasible, so its had to opt for much lower-profile corner grips. More on these in a moment.

One additional benefit of the new grips is that you can, if you wish, reverse iPad in them, using it as a stand – or even using it in tablet mode with the keyboard attached behind it. I wouldn’t recommend the latter option, as it makes for a much heavier device, but options are always good.

Second, the microUSB charging port has been swapped out for a USB-C one. This is a very welcome change given it can now be charged from a MacBook charger, and since most of today’s gadgets use this port, we’re getting close to the point where one charging plug does it all.

You can also opt to connect the keyboard to the iPad with a USB-C cable, for wired rather than Bluetooth connectivity. This also charges the keyboard, which is handy given that the extremely long battery-life means I do tend to forget to charge mine.

Third, one downside of earlier Brydge keyboards versus Apple ones has been the lack of any protection for the rear of the iPad. This is something the company has addressed by including a magnetic rear cover. Again, more on that shortly.

Brydge warned me that the prototype it sent me was not the final design. The company has identified two issues which it is working on correcting for the production model.

First, the much smaller prongs which grip the corners of the iPad were too tight. This made it something of an effort to attach the iPad. Second, the hinges are too weak, meaning that the iPad is prone to falling backwards once you lean it beyond a certain point.

The latter issue is an understandable one: with the new design, the hinges have to be smaller, and you’re asking two tiny prongs to hold up a fair chunk of weight (in relative terms).

Both issues meant that my testing was limited. I wasn’t keen on repeatedly inserting and removing my iPad when it was such a tight fit, and I didn’t want to risk it falling backwards. So my hands-on test comprised using it for an hour or so, and after that using the Apple case to hold the iPad up and using the keyboard just in front of it. In that format, I’ve used it for a total of about six hours.

I also found the magnetic rear cover wasn’t a great fit around the hinges, but my strong suspicion is that this is because I didn’t want to squeeze my iPad too far into those overly tight prongs.

Update: I’m happy to report that the production model solves both problems. Following the instructions to insert and remove the iPad at a 90-degree angle, it is still a snug fit but not overly tight. And the hinges now hold the iPad securely in position at any angle.

Brydge keyboards aren’t cheap. I’ve always described them as the keyboards Apple should make, and that does come with an Apple-like price.

However, expensive as that is, it’s still cheaper than the official Apple keyboard, at $179 and $199 respectively. And in my view, the difference in quality is night and day – so you’re getting a much better keyboard for a bit less money.

You can pre-order today, for delivery in mid-spring (May is the company’s best estimate). Or if you want to be sure the prototype issues are properly resolved, I’ll be trying out the production model as soon as it’s available.

Check out the promo video below.