Hands-on: How the Brydge Keyboard for the 2018 iPad Pro compares to Apple’s Smart Keyboard Folio 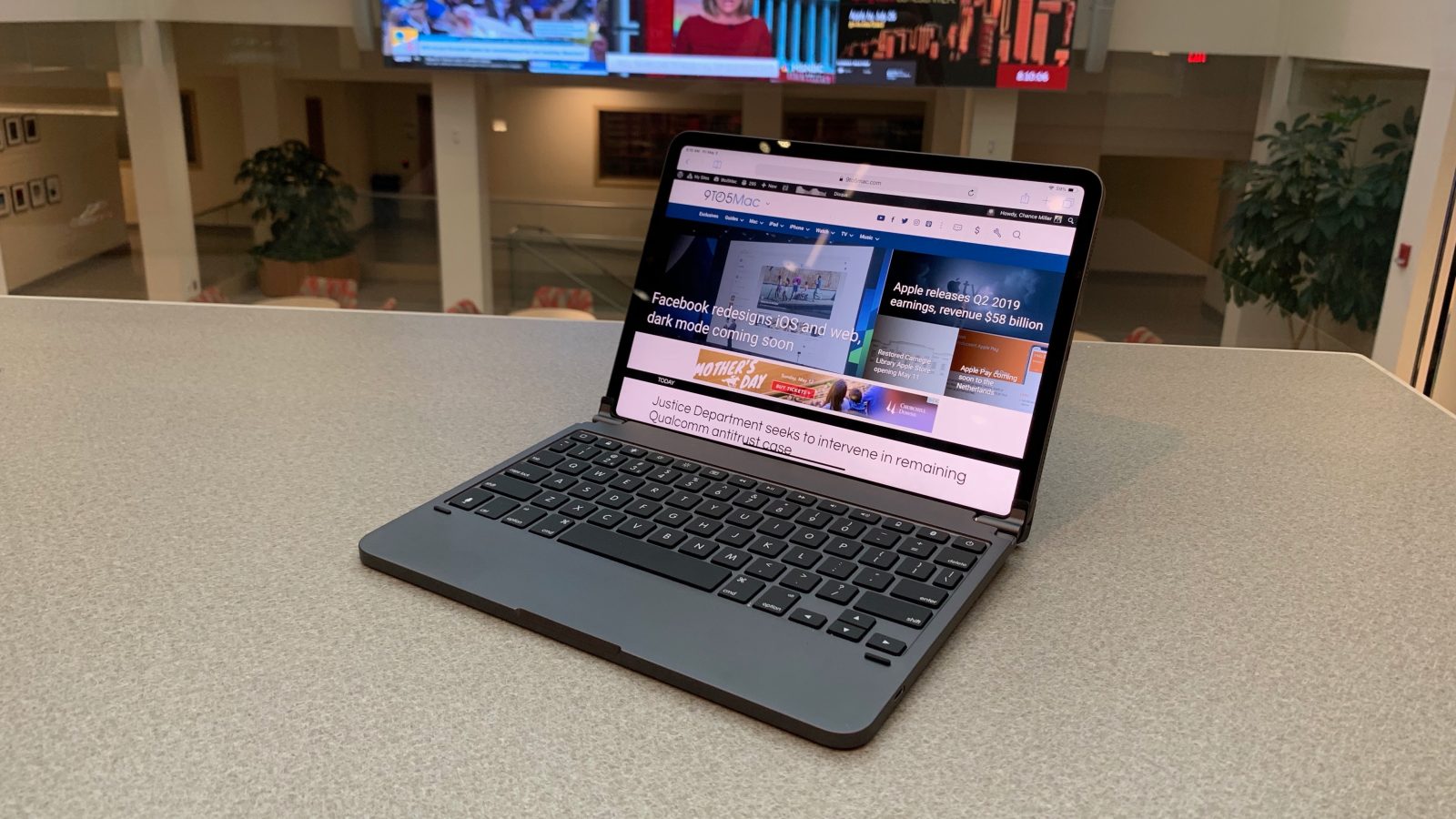 There are a lot of options when it comes to external keyboards for the iPad Pro. Apple makes its own Smart Keyboard, and companies like Zagg and Logitech routinely release sleek options. One of the most beloved makers of iPad Pro keyboards, however, is Brydge. With a MacBook-style aluminum design, there’s a lot to love about the Brydge Pro for the iPad Pro. But how does it compare to Apple’s own Smart Keyboard? Read on to find out.

In terms of design, it’s hard to deny the Brydge’s advantages over the Smart Keyboard Folio. The Brydge Pro is made from a beautiful aluminum that’s available in space gray and silver, matching perfectly with the iPad Pro color itself. There’s a MacBook-style lip on the front to make it easy to open the keyboard, as well as rubber notches to ensure your iPad Pro display is protected from the keyboard when in clamshell mode.

This year’s Brydge Pro also marks the first time Brydge has offered a back cover for the iPad. In past years, the back of the iPad has always been bare, but this year Brydge is including a rubber back that attaches magnetically to the iPad itself. Personally, I haven’t been using the back cover much at all – the color match between the keyboard and iPad Pro looks incredibly nice on its own.

Meanwhile, the Smart Keyboard Folio can’t even compare to the aluminum design of the Brydge Pro. The Apple-designed folio is an uninspiring piece of rubber that’s functional, but not at all easy on the eyes. For a company as design-oriented as Apple, I question the motive behind the Smart Keyboard Folio. It almost feels wrong putting the rubber folio on the sleek, unibody aluminum design of the iPad Pro. 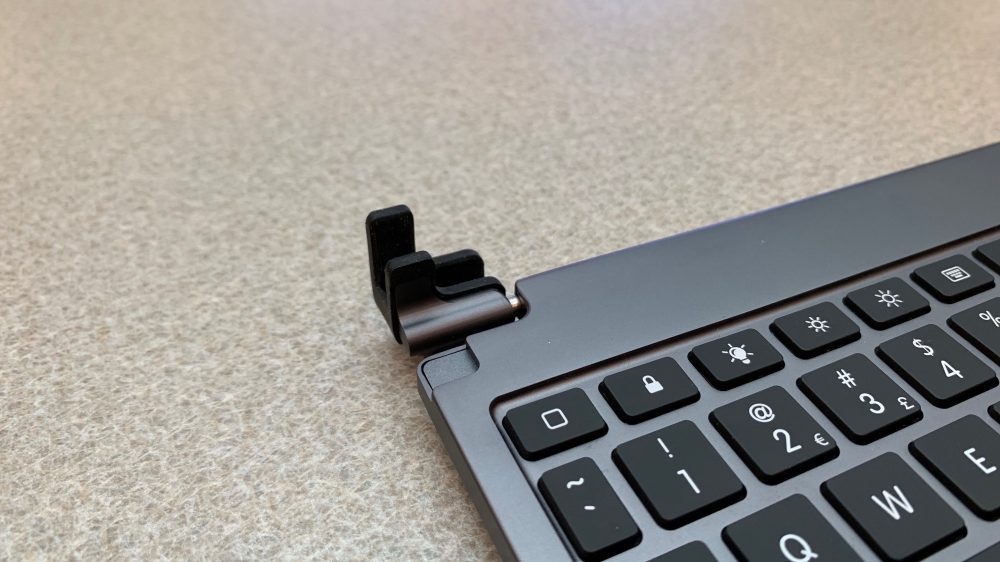 Docking the iPad Pro into the Brydge Pro can be a bit of a challenge at first. Essentially, you just slide the iPad into the two prongs on the Brydge Keyboard, but I’ve found that the rubber stoppers on the hinges can cause a few problems and are easily susceptible to sliding off. Once the iPad is all the way in the hinges, however, everything is incredibly stable.

One minor issue is that when the iPad is docked in the prongs, the Home bar along the bottom of iOS is harder to access as it sits slightly beneath the keyboard. I call this a minor issue because you can also use CMD + H to return to the Home screen, and there’s a Home button in the function row on the keyboard itself.

The Brydge Pro almost exactly doubles the weight of the iPad Pro itself, which is to be expected considering it’s essentially a second chunk of aluminum. The combination of the iPad Pro and Smart Keyboard Folio weighs 1.68 pounds, so the Brydge certainly makes things heavier, but you also get a far sturdier design. 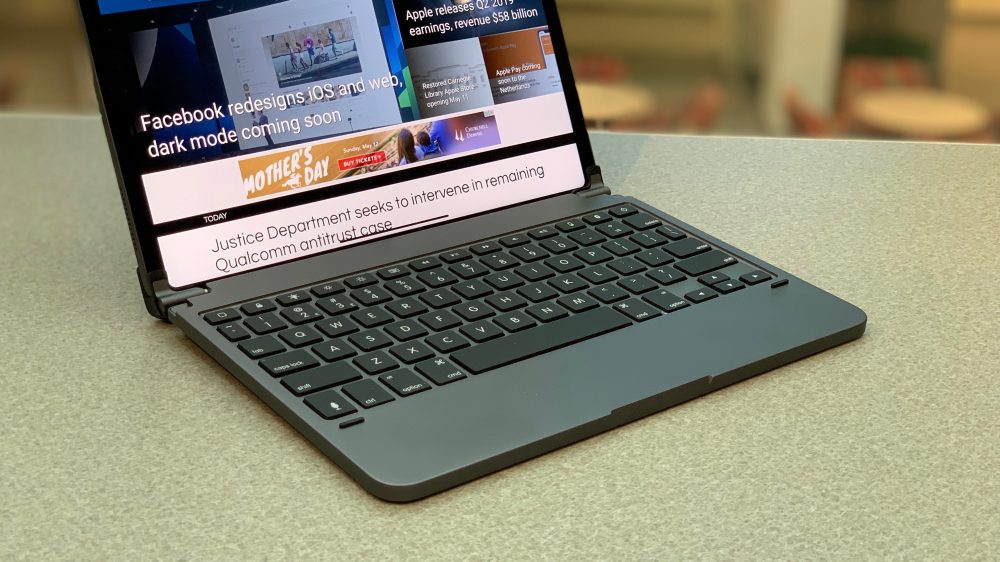 I want to preface this keyboard section by saying that it’s hard to describe a keyboard, and that you really need to try it in person to know what fits your needs best.

For a bit of back story, I use a 2018 MacBook Pro with the butterfly keyboard, as well as a standalone Apple Magic Keyboard with my iMac on a daily basis. This means I’ve grown very accustomed to the low-travel feel of Apple’s keyboards, and reliability issues aside, actually really like that style of typing.

When it comes to iPad keyboards, I’ve always used Apple’s Smart Keyboard. It features a similar design to the butterfly keyboard used in the MacBooks, but with slightly less travel as it is one piece of fabric as opposed to individual keys.

Personally, this took some getting used to after 3 years of using Apple’s butterfly keyboard, but after an hour or so of typing, I was up to full speed. The majority of this review was written on the Brydge Pro – using Ulysses on my iPad Pro – and it made for a rather pleasant experience. 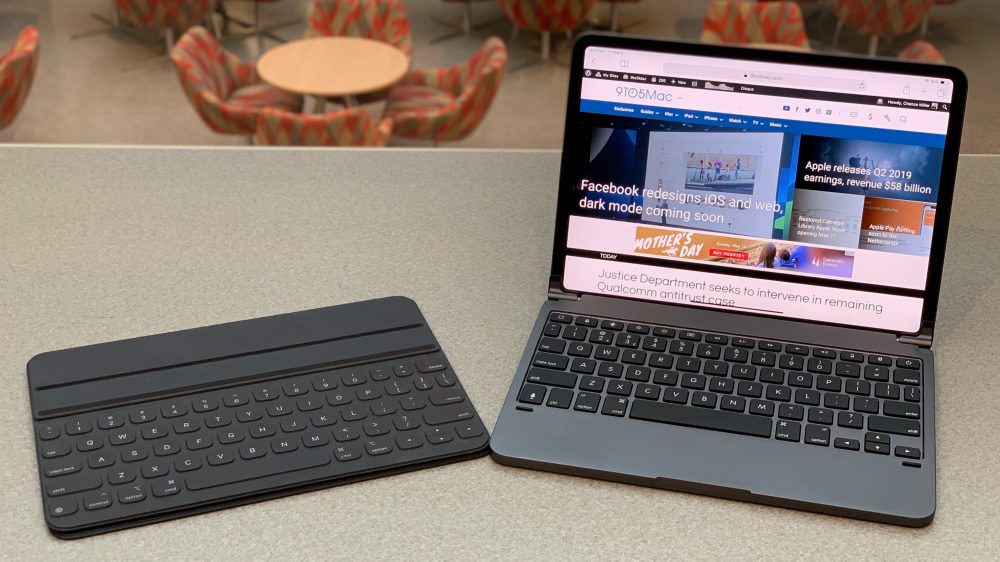 When it comes to comparing to the Smart Keyboard Folio, the Brydge Keyboard has a massive leg up because of its dedicated function row. Here, you have a dedicated lock button to quickly lock your iPad, as well as brightness controls, volume buttons, and media keys. There’s also a Home button as well as a key dedicated to bringing up the software keyboard.

Brydge Pro is also backlit. In the function row, you’ll find a dedicated backlight button, which allows you to switch between the three different brightness levels that are available. Backlighting makes a huge difference when it comes to using the iPad Pro as a laptop replacement.

My one complaint about the typing experience with the Brydge Pro is the lack of palm rests. This obviously just comes down to the lack of space, but for extended typing, the minimal palm rest area did cause a bit of fatigue after a while. I haven’t personally used the 12.9-inch Brydge Pro, but judging by the images, it looks to have far larger palm rests. The Smart Keyboard Folio, meanwhile, offers no palm rest area at all. 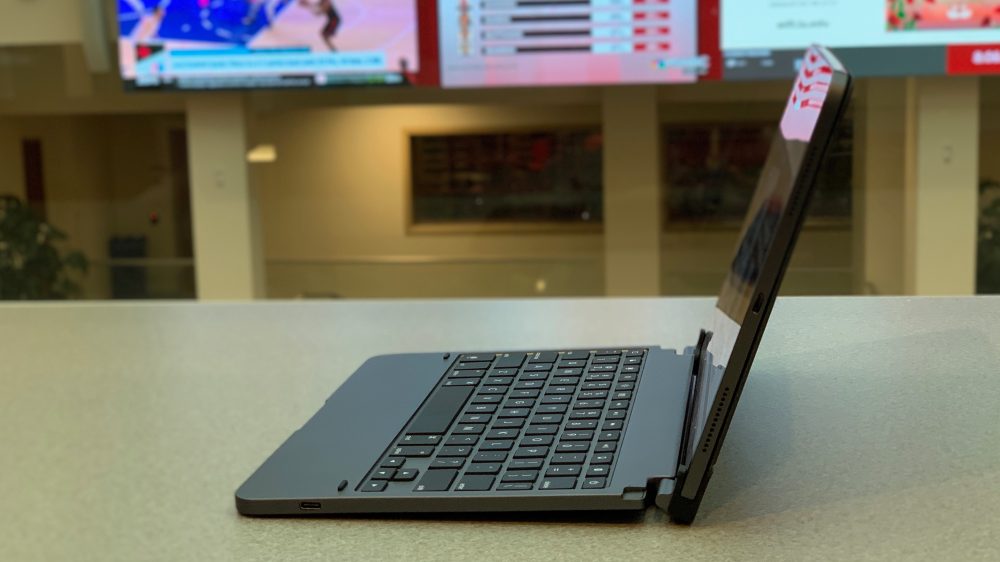 One the best things about the Brydge Pro is that it uses USB-C. This means you can recharge the keyboard via USB-C, as well as manually connect it via USB-C to the iPad Pro.

Brydge says you’ll only need to charge the keyboard once a year, even if you use the keyboard’s backlighting. This is an impressive feat, and almost makes charging not worth mentioning at all. Of course, one of the inherent benefits of the Smart Keyboard Folio is that you don’t have to charge it at all, but I don’t consider having to charge the Brydge Pro once, or even twice a year a big deal at all.

Improvements over the prototype model 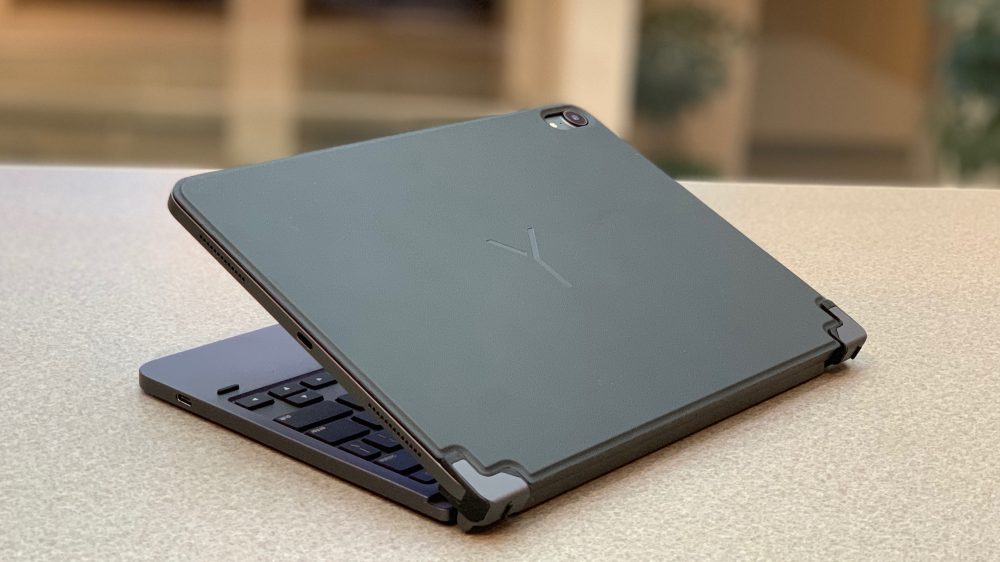 One issue Ben faced was that the prongs holding the iPro Pro in place were too tight. This is something that I still agree with, as I alluded to earlier. It can be challenging to attach and remove the iPad Pro from the Brydge keyboard because of these prongs. I understand why this is the case, but it can be a bit frustrating if you like to regularly transform your iPad Pro from a workhorse to a couch surfing tablet – as I often do.

Ben also noted that the hinges on his version of the keyboard were too weak, causing the iPad to fall backwards once you bend it beyond a certain point. With my consumer version of the Brydge Pro, I have not experienced this at all. This could be because I am using the 11-inch model and Ben was using the 12.9-inch version, but I have not had any concerns at all about the stability of the hinges or prongs.

Lastly, Ben pointed out that he found the magnetic rear cover not to be a great fit around the hinges. I personally have found the cover to fit perfectly with the consumer version, but that it has a tendency to slide off easily, especially when putting it in and out of a backpack. As I mentioned earlier, though, I tend to prefer the Brydge Pro without the back cover at all, so this has been a non issue for me. 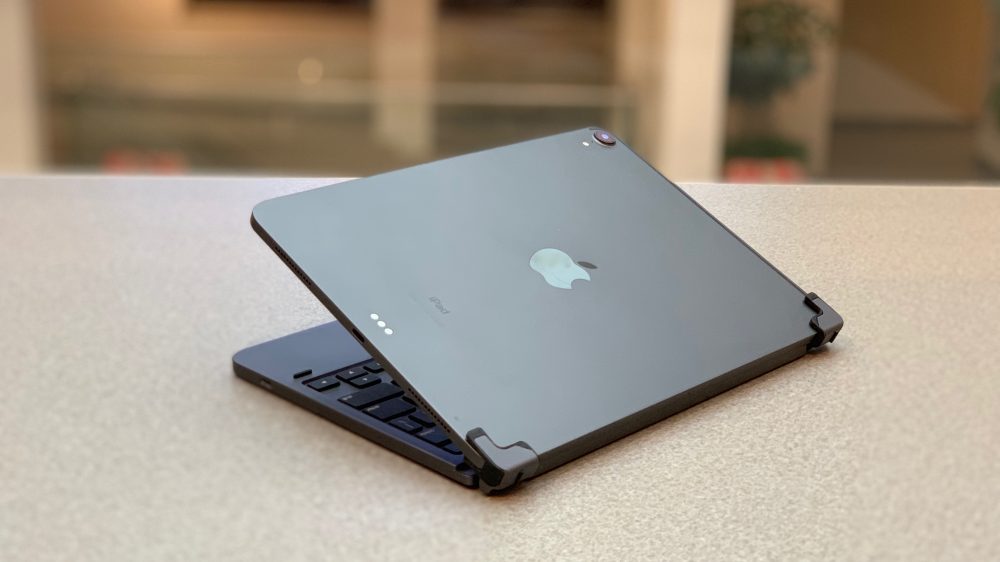 The Brydge Pro is an excellent alternative to Apple’s Smart Keyboard Folio for the iPad Pro. It packs a much sturdier design that matches perfectly with the unibody build of the iPad itself. It’s not perfect, but it’s a very enjoyable experience overall.

When it comes to deciding whether you should use the Brydge Pro or Smart Keyboard Folio with your iPad Pro, a lot of it boils down to how you use your iPad. If you’re regularly taking your iPad in and out of keyboard cases, the Brydge Pro slightly complicates that process due to its very tight prongs. If you plan on extended typing sessions, however, the Brydge Pro is a far better experience with backlighting, a function row, and more.

The Brydge Pro really does transform the iPad Pro into a full laptop replacement. With iOS also adding new features specifically for the iPad this year with iOS 13, it’s hard not to be excited about the potential here.