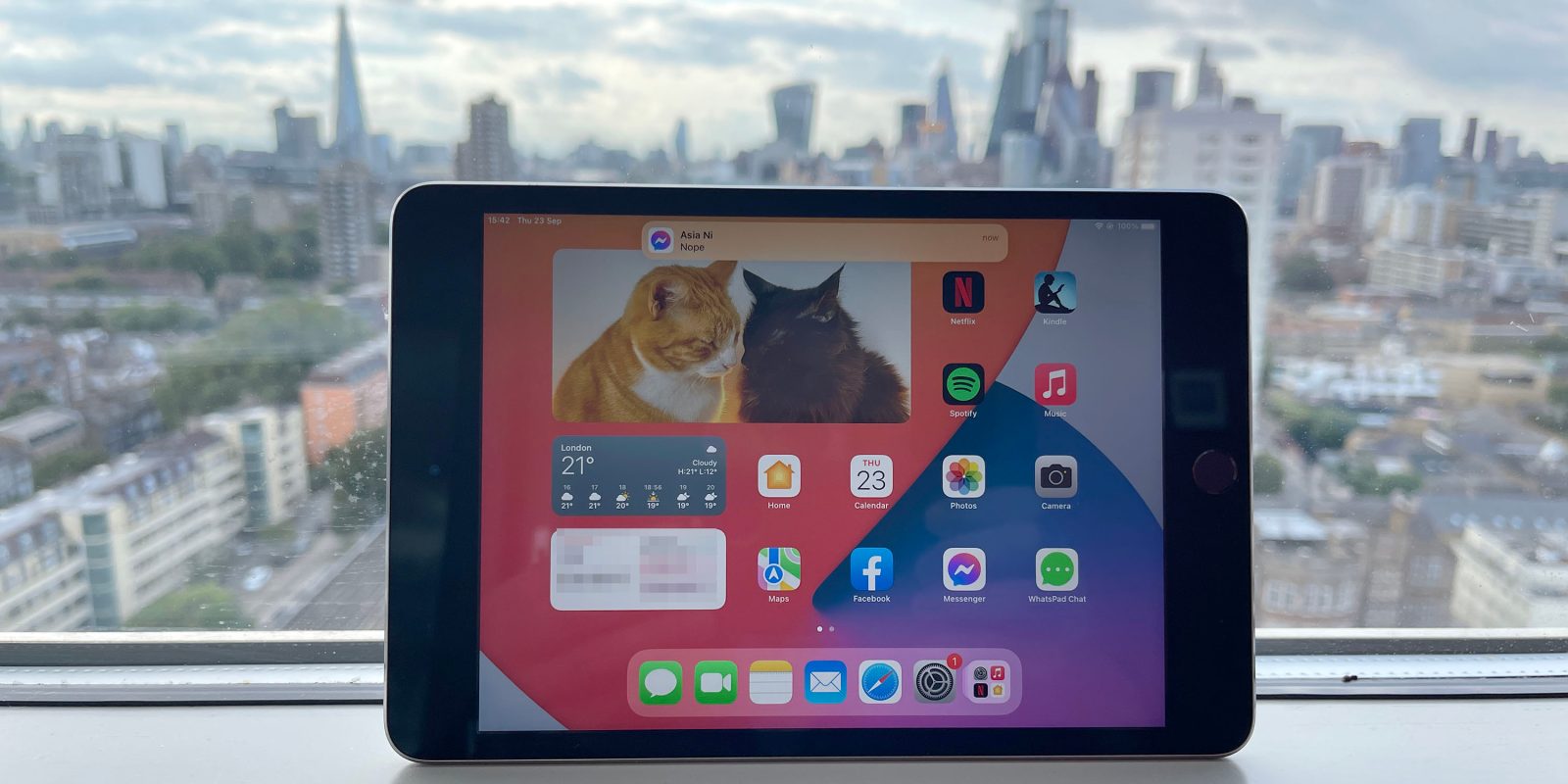 Yep, I admit it: My sole interest in the 2021 iPad mini was that it’s a super-cute gadget. I mean, it’s much more than that, but for me personally, I couldn’t really see a use for one.

I have the 12.9-inch iPad Pro, and I have a 6.7-inch iPhone. It’s hard to see a role for an 8.3-inch device to sit between the two, which is why I admired the new iPad mini, but didn’t order one. I wanted to, though! Which prompted an experiment …

I bought a used iPad mini 4.

I reasoned that it would be a free experiment because I’d be selling it again afterward either way. If it didn’t have a useful role in my life, then it would go; if it did, then I’d sell it and buy the 2021 model. Fortunately, I picked one up on eBay for a good price, so I could be confident in reselling it at the same price.

Of course, it wasn’t an entirely fair experiment, as the screen on the mini 4 is smaller, but it was close enough to determine whether there or not I had any sensible use for a device that sits between a large phone and a large iPad.

I should note that this was the first time I’d ever owned an iPad mini of any generation. I’ve always liked them, but never seen a use for one. I’ve played with them briefly in-store, but that was so long ago that I can still reasonably provide my first impressions of a tiny iPad.

Those first impressions are … this thing is cute! Outdated design and all. I wondered whether the classic design might feel outdated compared to my iPad Pro. In one way, it does – having a Home button now feels very old-school to me. But my most similar device in terms of form-factor is a Kindle Paperwhite, and alongside that, it doesn’t feel dated.

Figuring out which apps to put on it was tricky – as I had no idea what I’d use it for! I loaded it up with the basics, but comparing it to the Kindle was the only thing that sprang to mind, so I tried out the Kindle app.

I’ve gone back-and-forth between an iPad and Kindle when it comes to eBooks. I started with a Kindle, but decided that it was silly to carry two tablet-like devices so I switched to the iPad. When I switched to the 12.9-inch iPad Pro, I wondered about the size, but found I absolutely loved the two-page layout and size of the ‘pages,’ but my girlfriend found it was throwing out too much light even in dark mode when I was reading in bed while she was trying to sleep. So I ended up getting the Paperwhite after all.

The far smaller screen of the iPad mini means that I’ve had no complaints about reading in bed so far, and I definitely prefer the two-page layout even on a mini-sized screen. I also like the greater responsiveness over the e-ink screen of the Kindle.

However, despite forcing myself to use the iPad mini for a bunch of other stuff, with everything else I found that the device just didn’t make sense for me. If I wanted to briefly look something up on the web, my iPhone does the job well enough. If I want to do anything more involved, then I much preferred the larger screen of my iPad Pro or Mac.

I tried to convince myself it could be a desktop photo frame, but when you have a 49-inch screen on your desk, a second one doesn’t make much sense.

That’s not to say I have anything against the device. I still think even the older iPad mini is a cute device, and I’d have loved to have found an excuse for the new one, but sadly, I haven’t. The mini is too big to fit in a pocket, and if I’m carrying a bag, then I might as well carry the larger iPad (given that the weight difference doesn’t bother me).

So I’m not going to order the 2021 iPad mini. I also don’t think I’m going to keep the old one. But … despite my almost non-existent excuse for having one, I’m not going to sell it just yet! If you think you can sell me on a use for one, let me know in the comments …