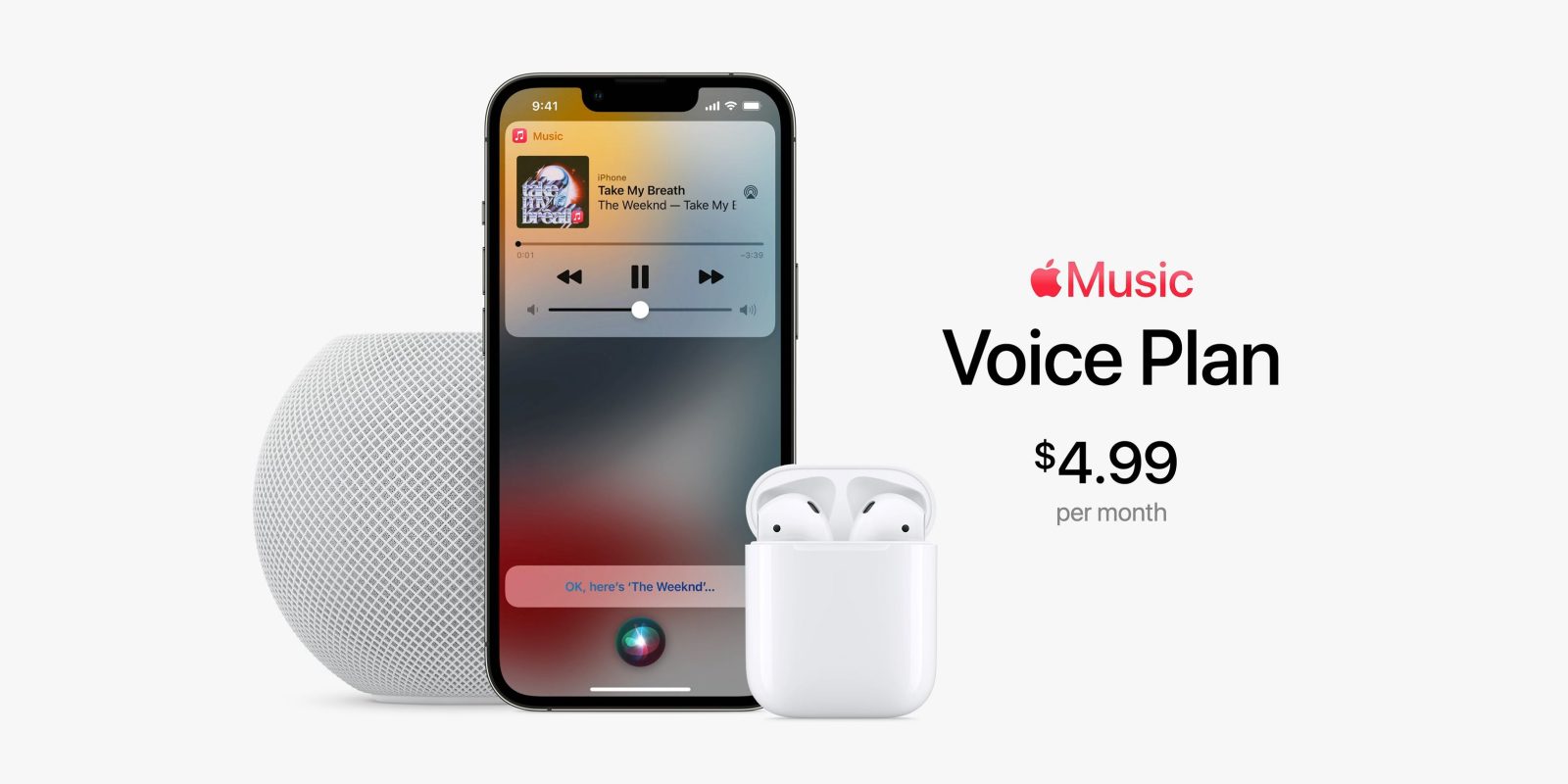 The Apple Music Voice Plan is compatible with any Siri-enabled device that can play Apple Music. That means iPhone, iPad, Mac, Apple TV, HomePod, CarPlay, and AirPods are in… but third-party integrations like Apple Music for Echo or Samsung Smart TVs are not supported.

What can you listen to with Apple Music Voice Plan?

The Apple Music Voice Plan gives full access to the Apple Music catalog. You can ask to play any song in the library, or play any of the available playlists or radio stations. There is no limit on song choice. It’s not like Pandora where you only have a limited number of skips.

In addition to being able to request specific songs or albums, Apple is dramatically expanding the themed playlists exposed to Siri, so you’ll be able to ask things like ‘Play the dinner party playlist’ and get instant streaming music.

What can’t you do with the Apple Music Voice Plan?

The catch with the Voice Plan is you cannot use Apple Music through the apps, you have to control music playback solely with your voice using Siri. So if you want to play the latest song by Ed Sheeran, rather than navigating the UI in the Music app on your phone, you would have to invoke Siri and say ‘Play the new Ed Sheeran song.’

Some other features are also not available on the Voice Plan, including Dolby Atmos Spatial Audio, Lossless music, Music Videos, and Lyrics.

What can I do in the Music app if I have the Voice Plan?

As the tier prohibits visual UI for music playback, the Music app will show a very different interface if you are on the Voice Plan. It will be stripped back and include suggestions about what to ask Siri to play, in addition to recent listening history. There will also be a special section to help users learn how to interact with Apple Music via Siri.

How can I sign up to the Apple Music Voice Plan?

You will be able to sign up through the Music app or directly with Siri by saying ‘Hey Siri, start my Apple Music Voice trial’.

Is there a free trial of the Voice Plan?

For each Apple ID, a customer can redeem a free seven-day trial of the Apple Music Voice Plan. Unusually, this trial does not auto-renew. So after the end of the seven-day period, customers will be prompted again to either pay $4.99 for the Voice Plan or choose one of the other full-featured Apple Music tiers.

How does Voice Plan stack up against the competition?

There isn’t a direct competitor to the Voice Plan from streaming music services like Spotify or Amazon. Spotify, Pandora, and YouTube Music offer free (ad-supported) options that typically limit the available catalog and are designed as ‘radio music’ services, so you don’t get to always choose exactly what you want to listen to.

Amazon Music offers a Single Device Plan for $3.99 per month. This is similar to the Apple Music Voice Plan in that you can only control the music with your voice using Amazon Alexa. However, the Single Device Plan is limited to one Echo or Fire TV device only. Apple Music Voice Plan costs a dollar more, at $4.99 per month, but you will be able to listen on every Apple device you own – as long as you use Siri to do it.