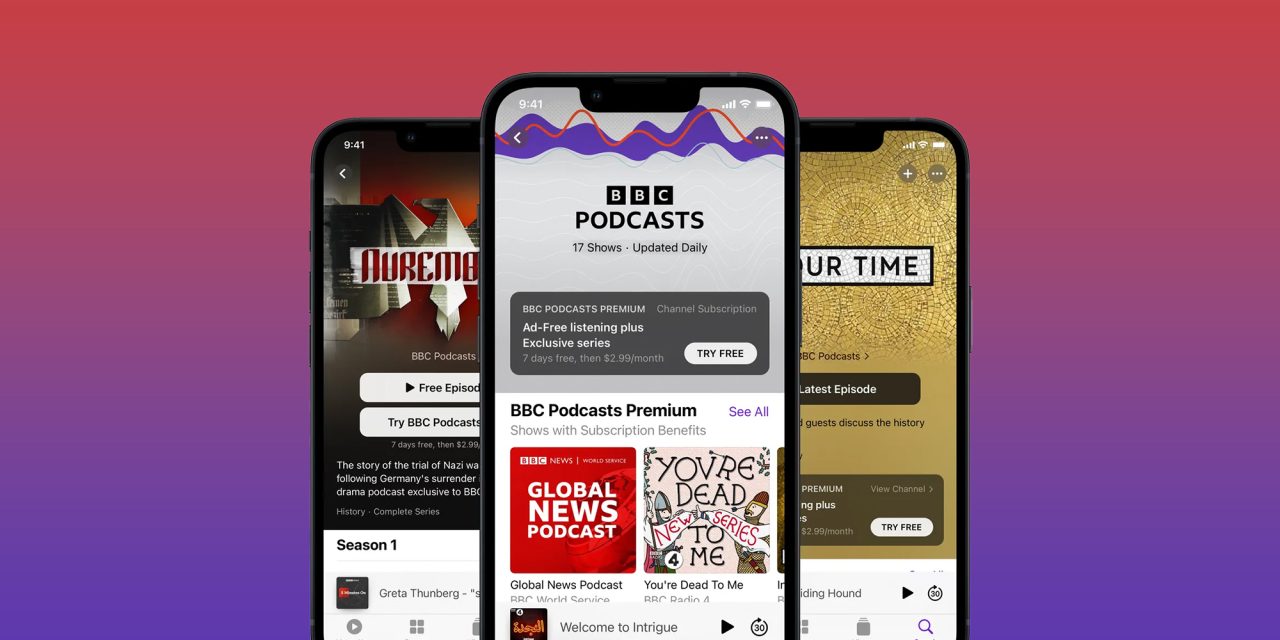 A new Apple Podcasts BBC partnership gives Americans and Canadians access to a range of new shows previously unavailable in either country. The shows are available on the BBC Studios channel, but you’ll need a paid subscription after a seven-day free trial.

Apple Podcasts Subscriptions allow creators to host bonus content and ad-free versions of their shows, in exchange for a monthly subscription […]

Apple Podcasts Channels are also rolling out today. Channels allow anyone to group their shows into a dedicated page, including custom branding and artwork.

The Verge reports on the partnership.

As of today, Apple has another big partner for its paid podcast channels: BBC Studios. And unlike other subscription products, which mostly offer perks like ad-free listening for existing audiences, this channel will give US and Canadian listeners access to shows that were previously only playable in the UK.

Here’s an example: The show 5 Minutes On already exists, but if you were to try to access the landing page from, say, your very American apartment in Philadelphia, you’d get an error message that says, “This content is not available in your location.” It also doesn’t show up on Spotify, Stitcher, etc. Through BBC Podcasts Premium on Apple Podcasts, paying Philadelphians (and Dallasites! and Montrealers!) will now be able to listen to 5 Minutes Onand other shows like Nuremberg: The Trial of the Nazi War Criminals, which stars Natalie Dormer from Game of Thrones.

For example, Inside Science takes a look at the science behind some of the stories in the news, while A History of the World in 100 Objects looks at the impact of inventions from drums to credit cards.

You can try the channel for free, after which access costs $2.99/month. A subscription also gives access to ad-free versions of the shows already available for free.

The Verge notes that Slate has also launched a subscription, with the Slow Burns show a major draw.

Also coming atcha this morning, Slate launched its own Apple Podcasts Subscription. You could already pay for things like ad-free listening and bonus content through Slate Plus, which was hosted directly on the publication’s site, and which also bundled in features that were relevant to its written content, like unlimited access to articles. Now, consumers have the option to pay solely for Slate’s audio, which notably includes the popular podcast Slow Burn.

In fact, I’m told that since the show has been such a big reason people have signed up for paid access before now, it was a no-brainer to launch the official Apple stream this week: Slow Burn’s newest season comes out tomorrow.