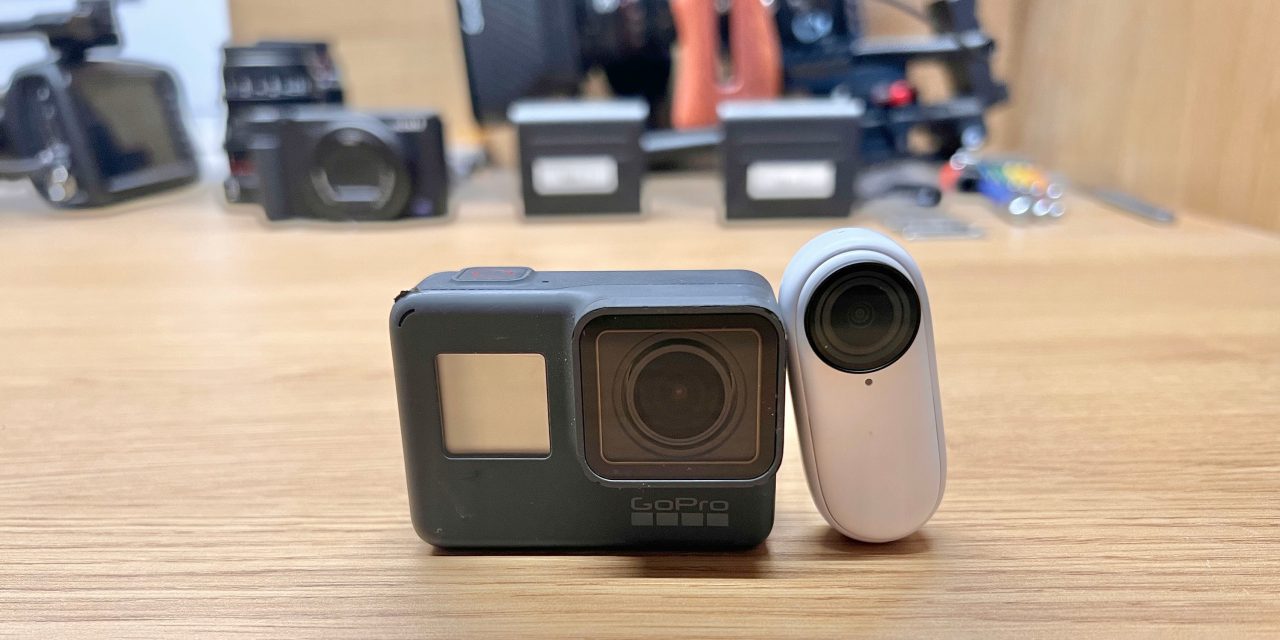 The action cam market is a pretty competitive one, with GoPro the undisputed leader – but the Insta360 Go 2 brings an interesting new take to the market. Apple is clearly a fan of the company, as the Go 2 is the sixth Insta360 camera to be sold in the company’s online store.

There are GoPro clones out there at all price points, and it doesn’t make much sense to be yet another one. So Insta360 has opted instead for a rather different camera, with very different strengths and weaknesses …

The first and most obvious difference is size! GoPros aren’t big, but this thing really is tiny, as you can see in the above photo, seen next to a Hero 5.

The camera is pretty much two inches high by less than an inch wide and deep. It also weighs less than an ounce!

It’s a pill-shaped white unit with a black camera lens on the front and a tiny LED indicator beneath it. The rear of the unit is black with gold-colored charging contacts.

However, while this is the size when using the camera, it’s a little different when you’re carrying it. The camera is supplied in an AirPods-style charging case, and that is pretty much the same width and height as a GoPro, just slimmer.

There’s built-in electronic stabilization – including the ability to edit the horizontal angle in post. Timelapse and Hyperlapse modes are available, alongside an AquaVision mode for more pleasing colors underwater.

It’s waterproof to 13 feet, offers a Wi-Fi live view to an iPhone, and the charging case can also be used as a remote control.

Total shooting time is 150 minutes, but with big limitations we’ll get to in a moment. The camera can be fully charged in 35 minutes. There is a power mount accessory available if you want to power the camera from a power bank while shooting.

The sacrifices made for size

There’s no such thing as a free lunch, and getting a camera down to this size involves some significant sacrifices, with three big drawbacks compared to a GoPro.

First, there’s no built-in screen. The only way to see what you are filming is by pairing it with your iPhone and doing a live view there. This isn’t actually as big a drawback as you might imagine, as we’ll see in the In use section below.

Second, recording time. You can’t have a tiny camera without a tiny battery, but the compact size also dramatically reduces the ability of the camera to dissipate heat. This means that the longest continuous recording time in Pro Video mode is 10 minutes, or 15 minutes in standard mode. Whether this is a problem depends on your intended use.

Third, the storage is built in. On the plus side, there’s nothing more to buy. The downside, of course, is that you can’t swap out a card when you want to shoot more than the supplied 32GB or 64GB capacity (depending which version you buy). You can, however, wirelessly transfer footage to your iPhone, then format the camera.

Practicality depends on your usage scenario

For some of this type of usage, a 10-15 minute recording limit is fine. To film one jump from a plane, one ski run, one abseil, and so forth, you’re not looking at long recordings.

However, a second approach is just to have the camera running throughout an activity and then find the highlights afterwards. A GoPro or clone will typically shoot around an hour, and it’s trivial to carry and swap out a spare battery or two. This means you could easily capture a full day’s worth of skiing or snowboarding, for example, and then find the best clips later. Although you can place it back into the charging case to recharge between shoots, the Go 2 is absolutely not capable of this type of use.

There’s also a secondary use of action cams for some of us. I have a handlebar-mounted GoPro on my bicycle, and run it for every journey.

That’s not because a commute across London is usually an adrenaline sport, but because there are occasional moments when it can be. You can get some aggressive drivers putting you at risk, and I find that I’m much more able to just let it go if I’m secure in the knowledge that I have video footage, and so could either report it to the police or just embarrass them on YouTube should I desire. I almost never do, but having that ability does let me shrug it off and move on with my day.

A typical utility ride for me is anywhere from 25 to 45 minutes, which is within the range of a single GoPro battery, but way beyond the capabilities of the Go 2.

For me, then, this is a tiny camera to use for very specific activities, such as a charity abseil I did for London’s Air Ambulance. You may have already seen the video of that in a recent MacBook Pro Diary piece, where I noted that the M1 Max machine let me edit two streams of 4K video without getting remotely warm or even switching on the fans. If not, here it is:

I said that the lack of a screen isn’t the drawback you might think it is, and that’s for two reasons. First, all action cameras have wide-angle lenses. That’s so that they can fit as much of the activity as possible into the frame, and also because, for speed-related thrills, a wider angle gives a greater sense of speed.

So for my abseil video, I knew that so long as the camera was centered on my helmet, not tilted to one side, and the forward/back angle was correct, all would be good. I only used the iPhone live view to set the forward/back tilt of the mount, then shot blind after that.

I used the supplied self-adhesive snap-in helmet mount for this. However, I know from experience that organizations running such events are always aware of the potential risks and liabilities of unknown kit. Even a lightweight camera could injure someone if it fell from 300 feet, so I adopted a belt-and-braces approach of adding copious amounts of universal engineering tool #2.

There’s a second reason a screen isn’t an issue when using the Go 2, and that’s because the company comes from a background of 360-degree cameras, and this one is actually shooting a high as well as wide shot, which it then crops to a conventional landscape format. If you select Pro Video mode, you can adjust the horizon in editing, so a left/right tilt isn’t a problem.

Alongside the helmet mount, you get two other mounts. The first is a spring-mounted clip, which you can attach to things like harnesses. The second is pure genius – at least in summer! It’s a pendant that you wear around your neck under a T-shirt or similar. Then the camera attaches magnetically. Because the shirt is trapped between the pendant and camera, it doesn’t swing around.

Being rather chilly here, I haven’t been able to shoot demo footage of a cycle ride or similar, but I have tested it just walking around the apartment, and it would be a good way to shoot a hyperlapse of a walk.

The charging case also has a clever built-in mini-tripod.

Finally, there is a bundle with a GoPro adapter included if you already have a bunch of mounts or simply want greater flexibility.

The company’s own demo video gives a good sense of some of the other ways the camera can be used.

You can find more samples on the company’s YouTube channel.

I tested the Insta360 Go 2 Camera Bundle as sold on the Apple website. This is the 32GB model with the mounts described above, and costs $300. You can find many more bundles and accessories on the company’s own website, and on Amazon.

If you haven’t already read the Practicality section above, you’ll want to do so, as that’s what will tell you whether or not this is the action cam for you. For me, it’s not the only one I need, but I do love it, for one main reason: the weight.

Attach a GoPro to a helmet, and you’ll really know it’s there! I dislike the front-heavy feel this gives. The Insta360 Go 2, in contrast, is so light you don’t feel it at all. Provided you only want to shoot short clips, this is hands-down the best helmet cam I’ve ever used.

I also love the pendant mount. I can definitely see myself using this in summer for hyperlapses while exploring a new city, for example – it can record for up to 110 minutes for a 7-minute video. The portability and built-in tripod means that it’s also a very practical way to shoot timelapses – of course, the iPhone can do this, but very often when I’m waiting for a timelapse to complete, I want to pass the time by using… my iPhone.

Bottom line, I’m going to keep my GoPro, but this is now my default helmet cam, and I’m also going to take it with me when traveling for the super-convenient timelapse and hyperlapse capabilities.