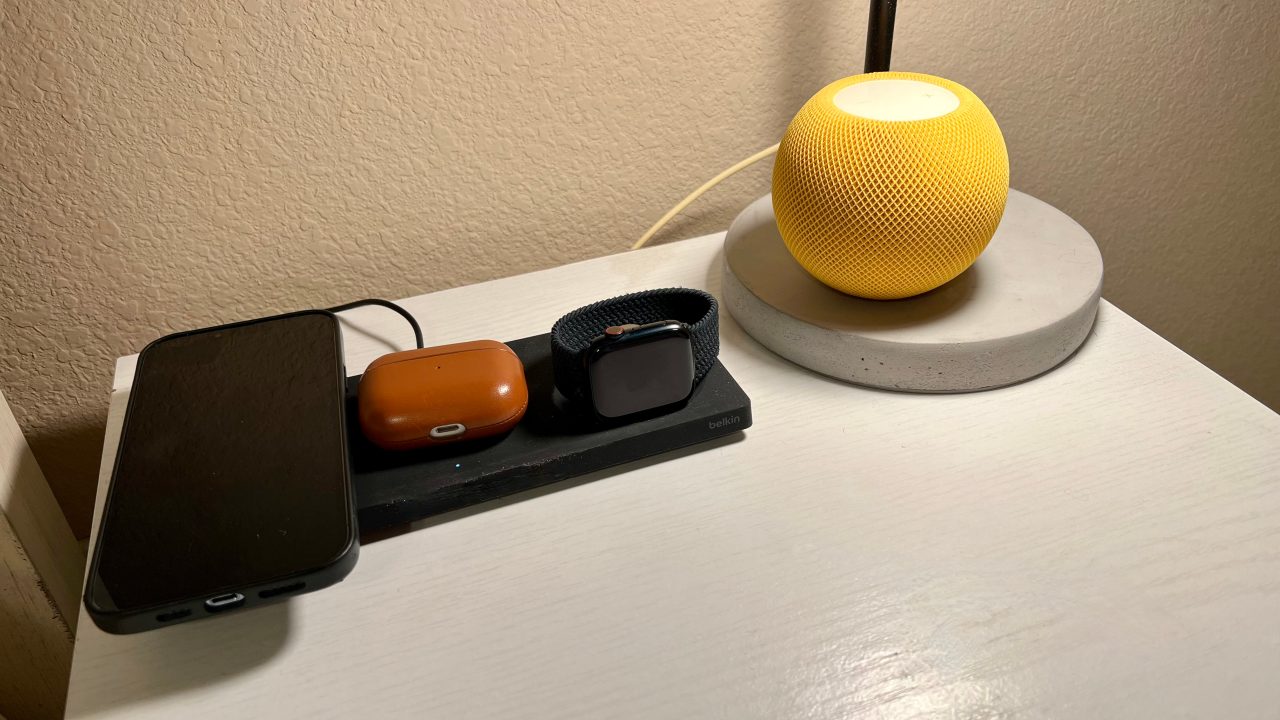 Belkin last month took the wraps off of its BoostCharge Pro 3-in-1 Wireless Charging Pad with MagSafe. With support for Apple Watch Series 7 fast-charging, 15W charging via MagSafe, and Qi pad design perfectly for AirPods, this could be the best multi-device charger on the market for Apple fans…

Belkin’s new 3-in-1 Wireless Charging Pad with MagSafe features a narrow, rectangular design. On the right-hand side you’ll find a built-in MagSafe charger that can recharge your iPhone 12 or iPhone 13 at 15W of power. You’ll also find a separate Qi charger for your AirPods in the middle.

This middle Qi charging slot was clearly designed with AirPods in mind and features a small LED indicator. It’s pretty small, but you might be able to charge another Qi-enabled device using it if you found yourself in a pinch. Keep in mind, however, that the Qi charger is limited to just 5W of power.

The fact that the charging spot for your iPhone is MagSafe-enabled (and essentially just a MagSafe puck integrated into the design) is very handy. This means you don’t have to fumble around to find the perfect alignment. Your iPhone 12 or iPhone 13 will align perfectly with the magnets, and there’s plenty of room even for the larger iPhone 13 Pro Max.

Finally, and perhaps most notably, you’ll find an integrated Apple Watch charging puck on the far left-hand side of the BoostCharge Pro. This Apple Watch charger can either lay flat or be raised up depending on which band you’re using and whether or not you want to use Nightstand Mode.

In addition to the versatile design, the Apple Watch charging puck also supports fast charging. Apple says that with fast charge, your Apple Watch Series 7 battery level can go from 0-80% in about 45 minutes. I’ve found this to be roughly accurate in my testing.

My biggest complaint with the Belkin BoostCharge Pro is the material it’s made out of. It’s a soft, fabric-like material that looks nice, but is sadly a total magnet for dust, link, and dog hair. As you can see in the images, I’ve been testing the BoostCharge Pro in black, and while Belkin also sells it in white, I can’t attest to whether or more or less prone to attracting dust.

The design of the BoostCharge Pro is also relatively bulky and heavy. This is no big deal if you plan to use it on your nightstand or desk, but you want to travel with it. That being said, the heavy and sturdy design absolutely makes the BoostCharge Pro feel premium. It also helps when you need to detach your iPhone from the MagSafe puck.

At $149.99, the BoostCharge Pro 3-in-1 is one of the top options on the market today for Apple fans, especially if you have the new Apple Watch Series 7. While its design means it’s not very conducive for traveling, it makes an excellent bedside charge for your iPhone, Apple Watch, and AirPods.

If you are looking for something a bit more travel-friendly, I’ve written before about how I’m a big fan of the MagSafe Duo. It’s pricey and doesn’t have a separate Qi charging spot, but it’s foldable design is very nice for travel.

You can order the BoostCharge Pro 3-in-1 Wireless Charging Pad with MagSafe from Belkin’s website today and the company says your order will ship sometime this month or in January.