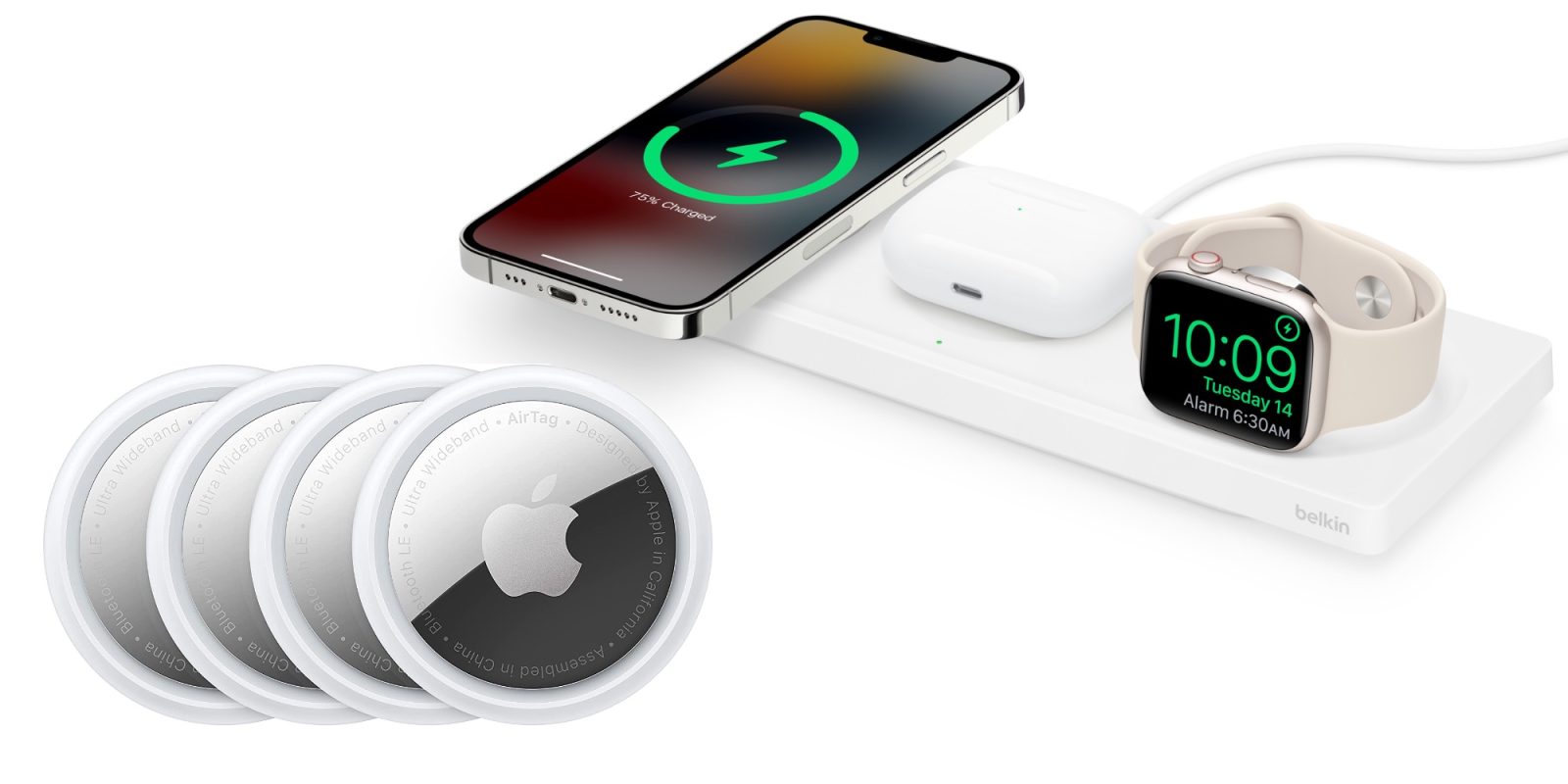 All of today’s best deals are headlined by a new all-time low on Apple’s AirTags 4-pack for $84. That’s alongside the first discount on Belkin’s new Pro 3-in-1 MagSafe Charger and a new low on Logitech Crayon for iPad. Hit the jump for all that and more in the latest 9to5Toys Lunch Break.

Amazon is offering a 4-pack of Apple AirTags for $84. While you’ll more normally pay $99, today’s offer is delivering a new all-time low that’s $15 off the going rate and $5 below our previous mention.

Apple’s first take on the Bluetooth locators arrived last summer with the notable inclusion of a U1 chip. Backed by precision finding and an augmented reality interface, these AirTags help you keep tabs on everything from keys to bags, luggage, and more. Plus, there’s a built-in replaceable battery that can go years before needing to be swapped out. Get a closer look in our hands-on review and then head below for more.

Joining in on all of the other Mother’s Day sales, Belkin is now launching its own savings event. Including its collection of popular smartphone accessories and new MagSafe releases, our top pick this time around is the new Boost Charge Pro 3-in-1 MagSafe Charging Pad at $135 in white. Down from $150, this the first discount to date after being excluded from previous promotions and a new all-time low at $15 off.

As the latest 3-in-1 charging station from Belkin, this new MagSafe offering arrives with a main 15W magnetic pad in the center that is geared towards refueling your iPhone 12 or 13 series handset. Off to the right of the flat unit is a secondary 5W Qi pad which is ideal for AirPods and other earbuds, with an integrated Apple Watch charging puck on the end to complete the package. You can get a better idea of what to expect in our hands-on review.

Amazon is currently offering the latest Logitech Crayon for iPad at $57. Down from the usual $70 price tag, which you’ll still currently pay at Best Buy, today’s offer is marking a new all-time low at $1 below our previous mention from back in February.

This new grey version of Logitech’s popular Crayon stylus launched last year and arrives with support for all of Apple’s most recent iPads. Ranging from the entry-level 10.2-inch model to higher-end iPad Pro configurations and more, this delivers Apple Pencil features for less. Refueling over a built-in Lightning port, it offers palm rejection features on top of fast-pairing right to your device. You can get a better idea of what to expect in our review of the original model, too.

Nanoleaf’s official Amazon storefront now offers its new Lines HomeKit Light Starter Set for $180. As one of the very first price cuts so far from the usual $200 price tag, this is now matching the all-time low as well as our previous mention from back in March. Today’s offer is the best in over a month and the third markdown to date. You can also save on the 3-pack Expansion set for the first time at $60, down from $70 and also matching the all-time low. You can get a better idea of what to expect in our hands-on review.

Delivering yet another unique addition to the Nanoleaf smart home stable, the new Lines pack all the same modularity that the brand is known for with a different take on ambient lighting. Each of the nine included Lines pair with an adapter and can be stuck up on the wall in various patterns. They then splash light against the wall and sport the same multicolor output that lets them play various effects on top of your typical adjustable color and brightness settings. Not to mention support with HomeKit, Siri, and your other typical voice assistants that rounds out the package.

Amazon is now offering the LifeProof Eco Friendly Apple Watch Band in Sea Moss green and Anchored blue from $24. Regularly $40 directly from LifeProof, this is a new Amazon all-time low on the green model and within a few bucks on the blue option.

Made from 99% ocean-plastic yarn, it features the brand’s “colorfast and wear-resistant” materials with recyclable packaging alongside compatibility with 42 and 44mm (Series 3, 4, 5, 6, SE, and 7). With every purchase, LifeProof will donate $1 to one of its nonprofit environmental partners as well.