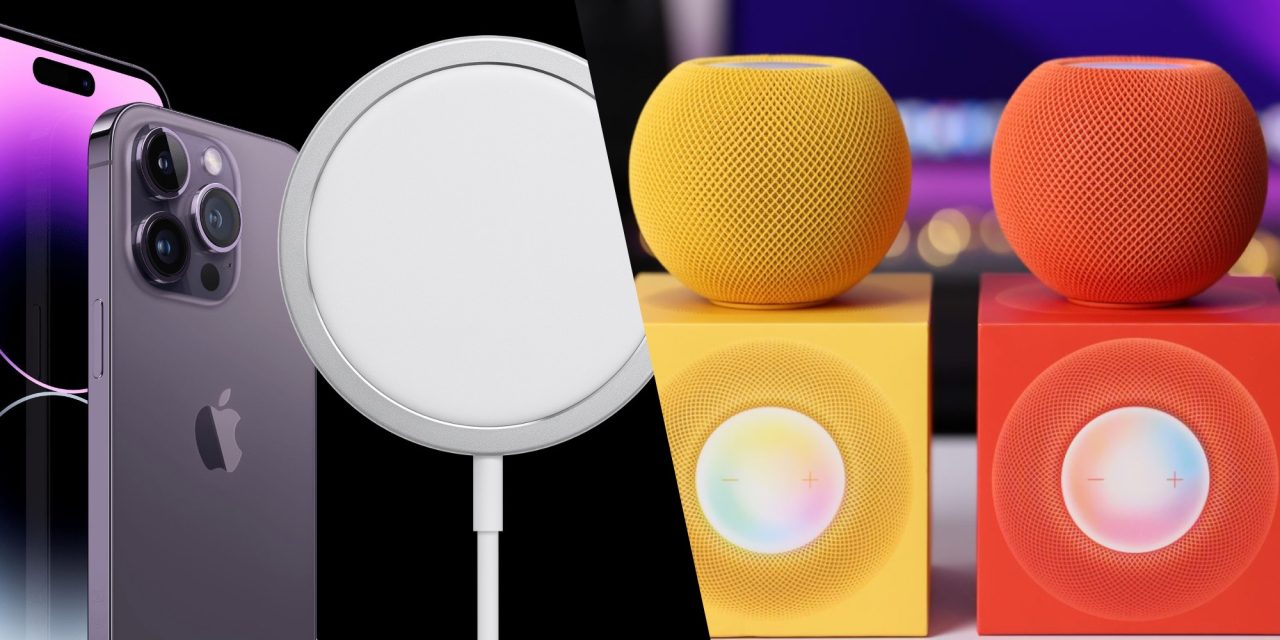 It’s Friday once again! And heading into the weekend we’re tracking three notable discounts on Apple’s latest gear. Leading the way is Apple’s official MagSafe charger at just $19 to go alongside a rare price cut on HomePod mini refurbished models at $60. Not to mention one of the first markdowns on Apple’s new Studio Display at $100 off or more. Hit the jump for all that and more in the latest 9to5Toys Lunch Break.

AT&T Wireless is now offering Apple’s official MagSafe Charger for $19. Normally fetching $39, this clearance pricing arrives at a new all-time low of 50% off. This is well below our previous $29 mention that ran throughout Black Friday, as well. Whether you just had an iPhone 14 series handset hit your front porch over the last couple of months or want to bring some MagSafe charging tech to an existing 12 or 13 series handset, Apple’s official charger is quite the notable buy on sale. It provides 15W charging speeds and will magnetically snap right onto the back of your device, delivering all of the perks of a cable with the convenience of not having to plug anything in.

Amongst all of the Apple discounts we saw over Thanksgiving Week and for Black Friday, those looking to cash-in on HomePod mini without paying full price were out of luck. Now after the fact, eBay and its official certified refurbished storefront is swooping in to save the day by offering Apple’s HomePod mini in four different colors for $60. Normally fetching $99, this is one of the best discounts to date for a refurbished model from a trusted source, delivering $39 in savings along the way. We last saw it at $80 in new condition, for comparison.

Arriving with the fabric-covered design in the recently refreshed colorway, HomePod mini delivers its latest smart speaker experience that brings Siri, Apple Music, and Thread support into your setup. There’s a touchpad at the top that not only indicates when Siri is listening, but also lets you adjust audio playback with just a tap. You’ll also find Apple’s new U1 chip that allows for quick music handoff from an iPhone 14. Get a closer look in our coverage.

Amazon is now offering one of the first chances to save on the recently-released Apple Studio Display. Discounting several different configurations, pricing starts at $1,499 for the stand offering and is down from the usual $1,599 price tag. Delivering only the second discount yet from the retailer, you’re looking at $100 in savings that beats our previous mention from earlier in the fall by an extra $1.

Arriving as a new, more affordable version of the Pro Display XDR, the new Apple Studio Display is designed to pair with the new Mac Studio and all of the other M1/M2 machines. Measuring 27 inches, the 5K monitor is packed with the latest features from Apple including a 12MP FaceTime camera backed by Center Stage. The studio-quality mics and 6-speaker sound system are balanced by the A13 chip. Around back there is a single Thunderbolt 3 port with 96W host charging, as well as three downstream USB-C ports for connecting in peripherals and the like.

Amazon is now offering the first real chance to save on Apple’s new 35W Dual USB-C Charger at $52. Having launched earlier this spring, the new first-party accessory typically fetches $59 and is now on sale for the first time.

This new all-time low arrives to refuel both your iPhone 14 and Apple Watch Series 8, or any number of other Apple releases in a streamlined designed. The compact build has a foldable plug with the usual white plastic finish you’d expect from an official accessory as well as a 35W output split across both of the USB-C ports. We also break down the experience further in our launch coverage.

Amazon is currently offering the Lutron Caseta Smart Dimmer Switch Starter Kit for $80. Marking the first discount since back in March, today’s offer is delivering a 20% price cut from the usual $100 going rate and about as rare of a markdown as you’ll find. It’s only the second chance to save this year, too.

Even as more and more brands enter the market of trying to replace your existing light switches, Lutron’s Caseta ecosystem still provides one of the more reliable platforms for building out whole-home smart lighting. This starter kit includes everything you need to get started with the platform right out of the box and comes centered around the required bridge. From there, you’re also getting an in-wall dimmer light switch which can also be controlled by the Pico remote. That’s of course alongside support for HomeKit, Alexa, and Assistant to round out the package.

9to5Mac also keeps tabs on all the best trade-in deals on iPhone, iPad, MacBook, Apple Watch, and more every month. Be sure to check out this month’s best trade-in deals when you decide it’s time to upgrade your device, or simply head over to our trade-in partner directly if you want to recycle, trade, or sell your used devices for cash and support 9to5Mac along the way!

Jordan’s favorite gaming peripherals of 2022: What to look for this holiday deal season [Video]