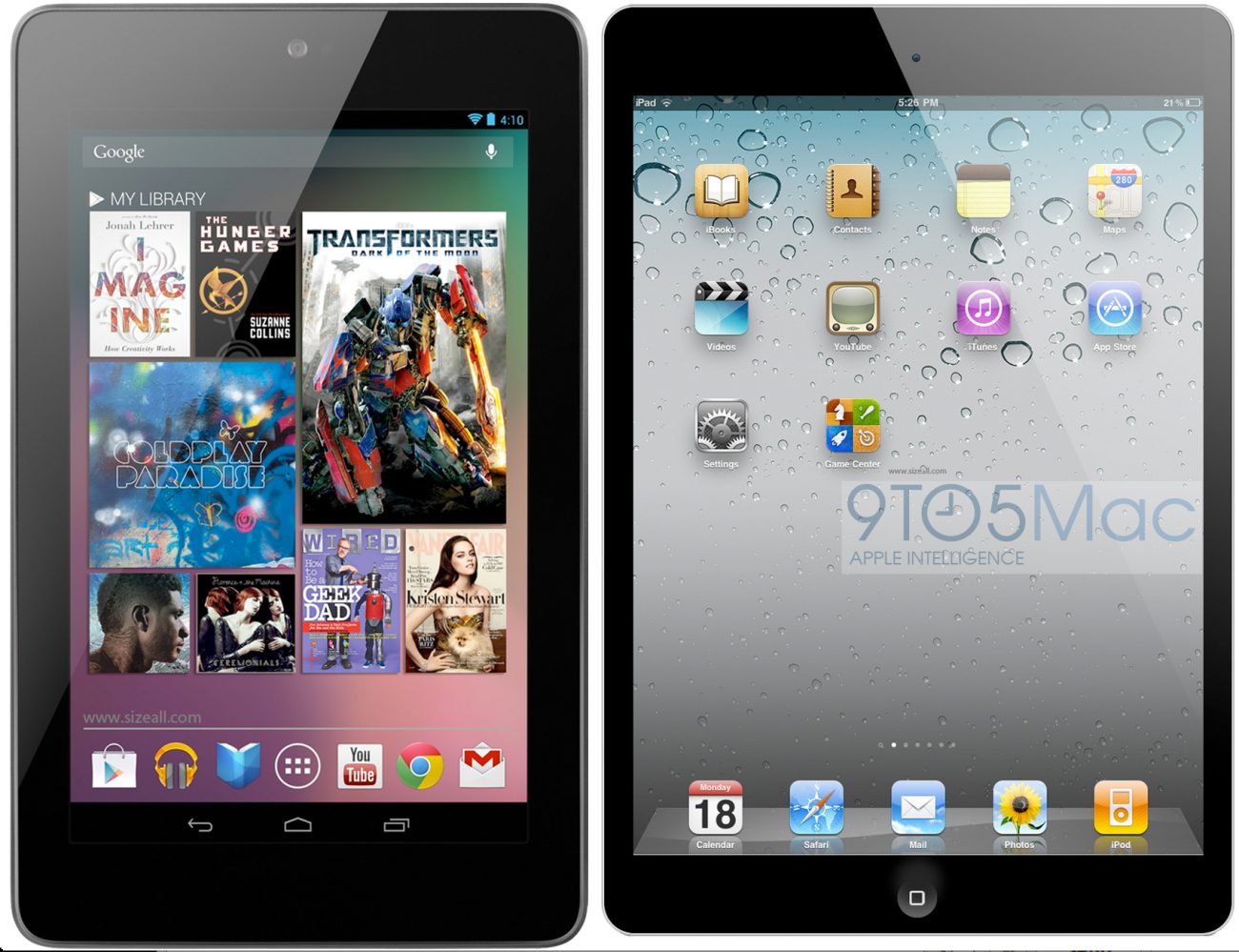 Here is a gallery of all the iPad mini images and mockups we have obtained to date:

Note: There are two different mockups we have done that will depend on the actual size of the bezel.

This iPod touch-like design makes a lot of sense for a number of reasons. For one, when compared to the Nexus 7 (and Kindle Fire, Galaxy Tab 7, RIM Playbook, etc.), this would give the iPad mini a similar, “purse-able,” and “big pocket-able” form factor but with a larger 4:3 display. The lack of a bezel on the sides will make it easier to hold too.

How do you hold it?

The lack of bezel on the side will not allow you to carry it like you hold a full-size iPad when in portrait mode without triggering some multi-touch on the display. Perhaps Apple has some software to dull the side touches when in portrait mode. But, really, this is unnecessary. You will need to hold it from the back more like you hold a phone (or one of those 7-inch tablets above). This is not hard, and in fact, it is the de facto way I tend to hold a Nexus 7 even though it has a bezel. Nexus 7 vs. iPad mini mockup made from Sizeall comparisons

When held in a landscape mode, however, you cannot get your hand around the back. You will hold it like an iPad—using the bezels— and it will be better for gaming with two hands. Grab a 7-inch tablet and try it.

We think the mini iPad will have front cameras for video conferencing. But notice the Apple.pro images above do not have a camera hole. This could be because they had not been drilled yet, but it could also signal Apple’s chance to make a low-end $200-ish model. Other shells above have both front and back cameras, but we do not have information on the exact specs just yet. If we had to guess, the iPad 2 cameras would be a great place to start.

We’re hearing Thin, thin, thin! from both Rene Ritchie at iMore and from schematics which show us a 7.2-7.3-ish iPod touch-ish thickness. Some of the shells above appear to have a gap for Apple’s telltale cell radio bar, so that is likely to be an option. The ZooGue does not have that top area that is usually reserved for cell radios—perhaps giving more weight to the low-end Wi-Fi only camera-less model. This sounds exactly like the kind of cost/feature-cutting strategy Apple could use to get to a $200-ish price point. Again, this is only speculation.

As was discussed on yesterday’s Branch, Apple has a finite window from which to make a great quantity of these devices. Planning for a November launch does not give a lot of ramp up time for the holidays. However, parts leaks have been sparse to this point. So, production probably trails the late September/early October launch window expected for the new iPhone.

At $299, Apple will sell a cargo ship full of these. If they can get the price down to $200, we might be talking about the biggest product launch in Apple’s history.