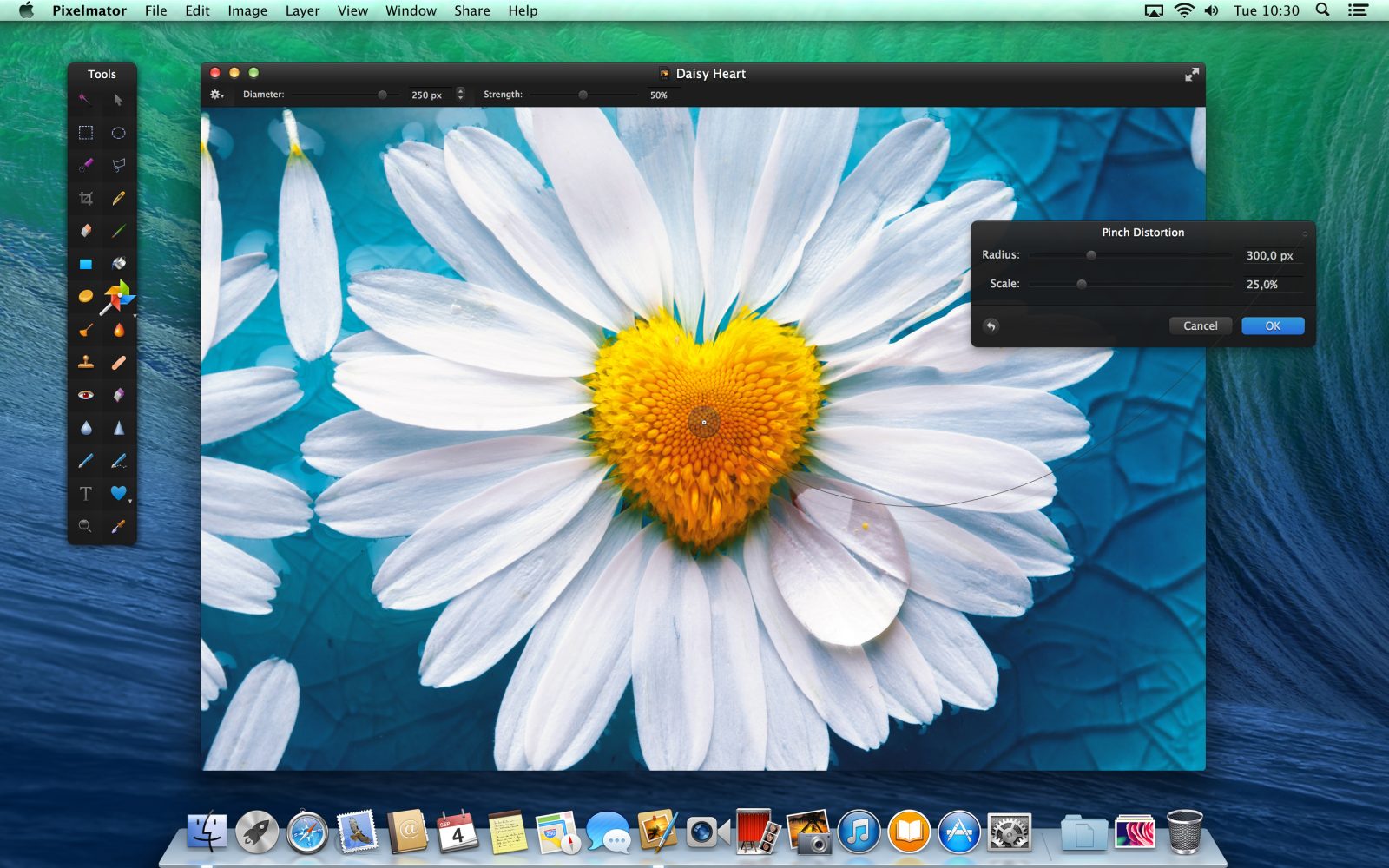 Styling options are exposed through a new pane in the app, the Styles pane. The new pane is integrated really well with the rest of the app, with the same look and feel you find in other parts of Pixelmator. If a layer has a style applied, a small ‘fx’ icon is shown next to the preview. It doesn’t feel like the view has been ‘tacked on’. Layer styles are a great way to spruce up text with visual adornments. Shadows (both the normal and inset type) are limited to solid colors only, but fills and strokes can be colors or gradients. The reflection setting is probably the only option that feels somewhat rushed because it isn’t flexible. Customization options such as distance or angle are not available and are sorely needed. The absence of more granularity here make it useless for most projects.

Pixelmator exposes a handful of preset layer styles at the bottom of the pane. The presets have a good variety to them and will probably come in handy at some point. As you would expect, this swatch can be added to, allowing you to store your own custom styles for future use. Like shapes, layer styles can also be imported from external sources if desired.

Aside from layer styles, Pixelmator 3.0 brings a brand new array of warping tools. These are officially referred to as “Liquify Tools” in the app. The new tools now accompany Smudge in the tools palette. A drop-down enables switching between Smudge and the new warping tools, namely: Warp, Bump, Pinch and Twirl.

Each effect is pretty self-explanatory once you increase the diameter size of the brush. Warp pushes pixels around the canvas, Bump gradually enlarges at the center of the brush, Pinch stretches and Twirl — well —  twirls the image a la a Photo Booth.

In the press release, the team describe the Liquify Tools as effects that “are incredibly fun to play with, whether you want to subtly improve your photos or artistically distort them”. Clearly, these are meant as more of a novelty attraction than serious editing features, but they can have productive uses. In the screenshot at the top of the article, the warp tool has turned a bland photo of a flower into a very stylized (but professional) image.

I had a play with these tools to see if I could achieve similar results and determine if this feature was more than just a gimmick. I took an image of my friend’s cat and used a mixture of the warp and pinch tools to touch it up.

It’s tempting to go overboard, but small tweaks are where these Liquify tools have value. In my example, I attempted to de-emphasize the face structure and highlight the piercing eye without making it look artificial.

An animated GIF of before and after my short experimentation with the Liquify tools.

Finally, I used layer styles to add a thin black border to frame the shot. I think the result was decent for something that only took about fifteen minutes of work.

Below the surface, for version 3.0, the developers have revamped the image engine. The team has combined all of OS X’s technology stack, such as Core Image and OpenCL, which results in a very performant application. In my use, on a retina Macbook Pro, Pixelmator was incredibly fast and efficient. Rendering is very fast and the application UI is equally responsive. Pixelmator claims an overall performance improvement between 1.4x and 2.0x compared to the previous version.

In addition, Pixelmator 3.0 is specially optimized to take advantage of the new Mac Pro’s dual workstation GPUs. With 3.0, Pixelmator is also a good Mavericks citizen, respecting system App Nap notifications and utilizing Compressed Memory to maximize the efficiency and power usage of the app.

As always, 3.0 is a free update for current users of the app. Pixelmator is available exclusively on the Mac App Store for $29.99 and requires Mac OS X Lion or later.