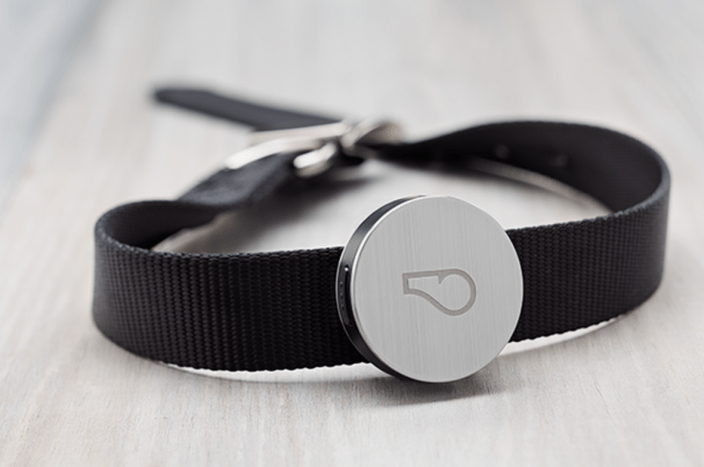 You can now buy an iPhone-connected accessory for your dog through Apple Stores as the Whistle Activity Monitor officially goes on sale in Apple’s retail stores in North America. The product was previously available through select retailers and online, but today arrives as the Apple Store’s first iPhone accessory specifically for dog owners. The company has also added some new features and dropped the price to $99 to accompany the Apple Store launch:

In addition to making Whistle more widely available to the nearly 68 percent of U.S. households with a pet (1), Whistle has announced two new tech capabilities to further simplify the important daily responsibilities of pet ownership: a brand new IFTTT (If This Then That) channel and custom in-app medication reminders.

The Whistle Activity Monitor attaches to any existing dog collar, syncs over Wi-Fi and Bluetooth, and allows dog owners to track a number of health and fitness related metrics for their pet through a companion iOS app. The app also lets users set goals, get reminders for activities and medication, and share updates with family members or others added as owners in the app. The San Francisco-based company was previously only selling the product through major retailers Amazon, PetSmart and Brookstone after launching last year. It also unveiled a new tracker for dogs earlier this year called WhistleGPS that will include GPS tracking features for a monthly subscription in addition to activity tracking.

The Whistle Activity Monitor is available in Apple Stores in the US and Canada starting today for $99. It’s also now available from Amazon and elsewhere for the new $99 price point. That’s down from $129, which is how much it will charge for the newer WhistleGPS that it’s now accepting preorders for. It joins the many other home automation and fitness products Apple is pushing in retail stores alongside its new iOS 8 Health and HomeKit features, but it’s the first on Apple Store shelves specifically made for pet owners.