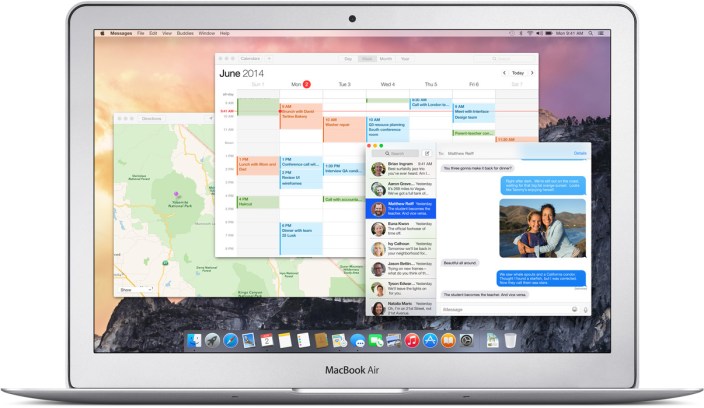 After previewing OS X Yosemite for the second time since its WWDC event in July, Apple announced today that OS X 10.10 Yosemite will be available today through the Mac App Store [direct link when live] at no cost to users. Mac users running OS X 10.8 Mountain Lion and 10.9 Mavericks can upgrade can upgrade to 10.10 Yosemite, although newer hardware is required for some features. OS X Yosemite brings a redesigned look and feel to the Mac as well as several features like iCloud Drive, Handoff and Continuity, Notification Center widgets, and more.

OS X Yosemite offers up a redesigned version of Safari with a birds-eye view of tabs similar to the iOS 8 browser, more intelligent search with results from iTunes, Maps, Bing, Wikipedia and more, more privacy features like DuckDuckGo search as an option, and native support for Netflix so you no longer need Microsoft’s Silverlight plug-in to watch content.

Mail on Yosemite is also updated with a new Markup feature for annotating content as well as Mail Drop, which allows you to send attachments up to 5GB over email using iCloud.

Messages can now receive SMS text messages from your iPhone and an added microphone button allows you to send voice messages to other Yosemite users as well as iOS 8 users. The whole app is redesigned with the iOS iMessage look and feel. Messages on Yosemite also allows you to view shared locations of family and friends similar to the iOS Find My Friends app.

Finally, Spotlight is overhauled on OS X Yosemite with more search results from sources like Wikipedia, Bing, Maps and more which include movie times and news with interactive previews.

CUPERTINO, California—October 16, 2014—Apple® today announced that OS X® Yosemite, the latest major release of the world’s most advanced desktop operating system, is available as a free upgrade for Mac® users from the Mac App Store℠. Yosemite delivers a fresh, modern look and introduces Continuity features that make it easy to hand off activities between Mac and iOS devices and even make and receive iPhone® calls from your Mac. Yosemite also includes a new Today view, a redesigned Spotlight® and updated versions of Safari®, Mail, Messages and iTunes®.

“OS X Yosemite is the most advanced version of OS X we’ve ever built, with a brand new design, amazing Continuity features and powerful versions of the apps you use every day,” said Craig Federighi, Apple’s senior vice president of Software Engineering. “OS X Yosemite ushers in the future of computing, where your Apple devices all work together seamlessly and magically. It’s something only Apple can do, and it’s available today.”

OS X Yosemite has been redesigned with a fresh, modern look, while maintaining the power and familiarity users expect from a Mac. Streamlined toolbars make more room for your content, and use translucency to reveal additional app content as you scroll. Other translucent elements, such as window sidebars, take on the feel of your desktop picture and give you a sense of what’s hidden behind the active window. App icons have a clean, consistent design, and a new system font improves readability on every Mac and looks stunning on a Retina® display.

Yosemite includes amazing Continuity features that make your Mac and iOS devices perfect companions.* Handoff automatically passes what you’re doing from one device to another, like writing an email or surfing the web. Instant Hotspot makes using your iPhone’s hotspot as easy as connecting to a Wi-Fi network.** AirDrop® now works between Mac and iOS, so you can quickly and easily share content across devices. All the SMS messages that previously only appeared on your iPhone now can automatically appear in Messages on your Mac and all your iOS devices. You can even make and receive iPhone calls on your Mac.***

Yosemite introduces innovative new features, including: Today view in Notification Center, giving you quick access to informative widgets for Calendar, Weather, Stocks, Reminders, World Clock and social networks. You can also add widgets like Yahoo! Sports from the Mac App Store to customize your Today view; a new Spotlight, delivering rich information right to your desktop from Wikipedia, Maps, Bing, App Store℠, iTunes Store®, iBooks Store℠, top websites, news and movie showtimes; iCloud Drive℠, so you can store files of any type in iCloud®, organize them any way you like, and access them from your Mac, iPhone, iPad® or even a Windows PC; a streamlined new Safari that delivers the fastest performance, as well as the longest battery life for web browsing and Netflix HD video streaming on the Mac; an updated version of Mail, which includes Markup for quickly filling out and signing forms and PDFs right within Mail, plus Mail Drop, which makes it easy to send large attachments up to 5GB for free; enhanced Messages, so now you can add participants to your ongoing group conversations, see their locations on a map, quickly access attachments and even mute notifications; iTunes 12, which has a sleek new look, is fast and simple to use, and makes it easier to switch between browsing your music library and discovering new music on the iTunes Store. A new Recents view makes it easy to access the media you just purchased or recently played; and Family Sharing, so family members can now browse and download each other’s iTunes, iBooks® or Mac App Store purchases.

Pricing & Availability OS X Yosemite is available as a free upgrade today from the Mac App Store. Yosemite supports all Macs introduced in 2009 or later, and some models introduced in 2007 and 2008. For a complete list of system requirements and compatible systems, please visit apple.com/osx/howtoupgrade. Continuity features require iOS 8.1, which is available as a free upgrade starting October 20. OS X Server 4.0 requires Yosemite and is available from the Mac App Store for $19.99 (US).