AAPL will announce record quarter, predict analysts, with earnings up 11.9%

I’ve got the collected fiscal Q4 estimates of 33 Apple analysts — 21 professionals and 12 amateurs. They are all to a man (and one woman) predicting record Q4 sales and earnings (up 7.1% and 11.9%, respectively).

The average expectation was for Apple to be at the top end of its gross margin guidance of 37-38%, and to slightly exceed the high-end of its revenue guidance of $37-40B, at $40.13B.

The news will, they think, be less good for iPad sales, which they predict will have fallen by 6.5% to 13.17M. iPad sales have been down for each of the past two quarters, and analysts have previously suggested that weak iPad sales may be here to stay. Unsurprisingly, they expect iPod sales to continue their slide towards irrelevance, expecting a 33.7% drop to just 2.32M units as consumers use iPhones as their portable music devices.

While the iPhone went on sale in China too late to impact Q4 AAPL financials, it’s likely that Tim Cook will share some early numbers. Fortune reports that every model is currently out of stock in Chinese Apple stores.

As always, Fortune has shared the complete table of analyst predictions (below), ready to praise those closest to the mark and embarrass those miles from it.

We’ll of course be bringing you the AAPL numbers as soon as they are announced, together with live coverage of the conference call. You can also listen in live yourself. 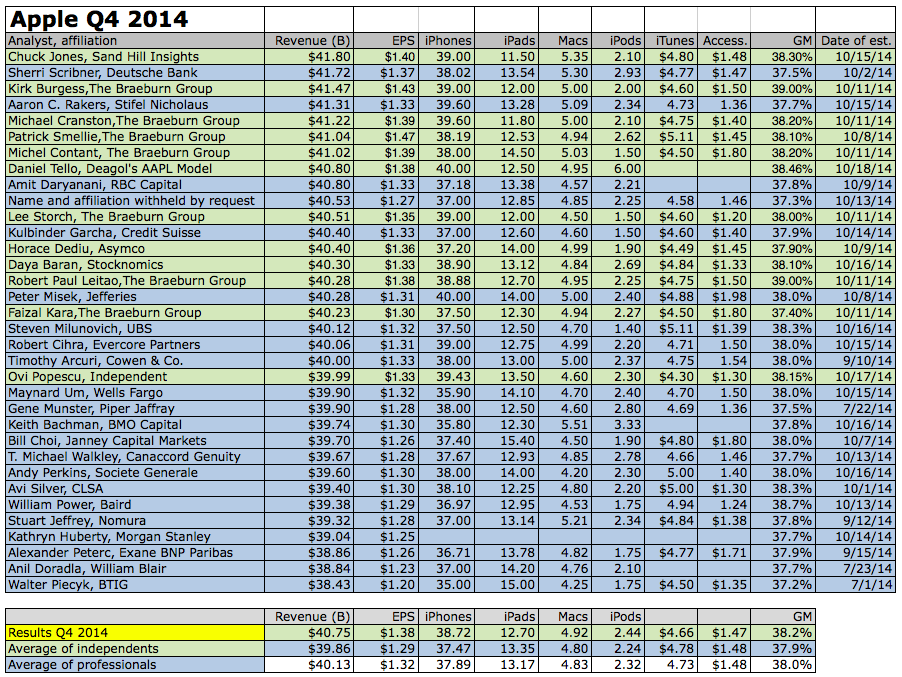