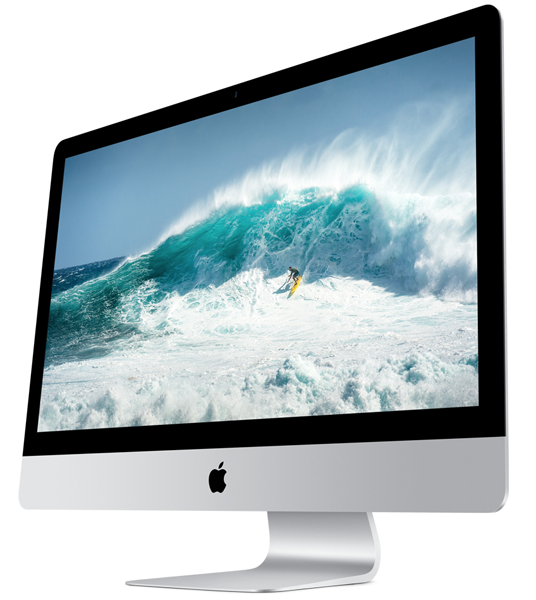 The early reviews are out for the iMac with Retina 5K display, and the tl;dr version is: if you can afford it, buy it.

Everyone of course agrees that the key market for the machine is video professionals (beating even the base-model Mac Pro in benchmarks), the 5K resolution offering the ability to display full-size 4K video while still leaving enough room for editing tools.

But while the new iMac may be overkill for more mundane tasks, reviewers also agreed that the display is so good that even if you don’t need one, you’ll still want one …

The WSJ said that it’s the Mac that makes desktops relevant again.

Who needs a desktop in a world with laptops, tablets and even phones that are just as capable? Last week Apple introduced a new kind of desktop iMac that changed my mind […]

The Retina iMac is a game-changer for creative types […] My biggest worry was that the computer would choke while trying to drive all those millions of pixels. But performance wasn’t a problem in my tests loading giant images in Photoshop, flicking through a field of previews in Adobe Lightroom or editing 4K video in Final Cut Pro […]

TechCrunch agrees, saying Apple has built a computer that provides the future, today.

Apple has created an all-in-one that’s ideal for creative professionals, especially those with a visual focus, with the iMac with Retina 5K display. But that’s not all the company has done with this machine; instead, they’ve built a computer that provides the future, today, for anyone with the financial capability to get it […]

This is an iMac that will satisfy anyone who takes the plunge. A Mac Pro might be a more powerful performer, but for most people, the iMac with Retina display will be the best all-around computer for their needs […]

Apple’s price of admission for 5K goodness is steep, with prices starting at $2,499 (plus additional fees for custom configurations) but it’s worth every penny.

CNET says the new machine adds a stunning display to the gold standard for all-in-one desktops.

The new 27-inch Apple iMac adds a stunning 5K display for not much more than last year’s high-end model. The design, while not updated, remains the gold standard for all-in-one desktops.

[The downside is that] except for the new screen and a different GPU, the components are essentially unchanged from last year’s version. The high starting price only gets you a mid-level Core i5 processor […]

But, having experienced the 5K screen up close, it’s also hard to un-see the effect of never being able to detect the pixel grid on the screen. I’ve had several photo and video professionals tell me this is exactly what they’re looking for, and at only $500, £400, or AU$550 more than the closest comparable non-5K 27-inch iMac, it’s the equivalent of adding the cheapest possible aftermarket 4K display. If you’re in that professional or semi-pro category, the math may just work out for you on this.

PCmag declared it their Editors’ Choice for high-end, all-in-one desktops.

The Retina 5K display isn’t just good, it’s overwhelming […] I loaded up the new iMac with several 4K nature videos. The tiniest stars in a night sky rendered themselves as pinpricks of light; nooks and crannies in stone and wood showed up in minute detail. I also streamed House of Cards in 4K, and seeing Kevin Spacey’s every pore and follicle was enough that meeting the actor in person might feel like a letdown […]

The use of a discrete AMD Radeon R9 M290X graphics card means that not only does the iMac have the graphics chops for 5K video, it can also handle gaming (albeit, nowhere near 5K resolution) […] While the iMac isn’t intended to be a gaming machine, you’ll find that it will play current AAA titles at playable frame rates, provided you keep the resolution below 1080p and back off the detail settings.

The unmatched display paired with solid high-end performance at a surprisingly affordable price makes it our Editors’ Choice for high-end all-in-one desktops.

It sounds like if you don’t have a financial justification for a 5K display, you might just want to leave your wallet at home and remove your cards from Apple Pay before you next visit an Apple Store because, as Seth put it the second the iMacs were announced: