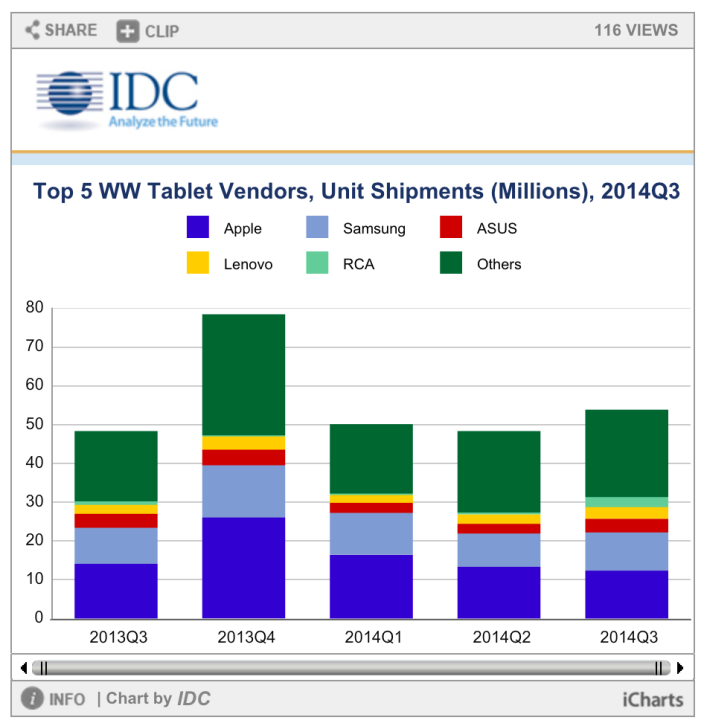 New data from IDC tracking worldwide tablet shipments shows that Apple has maintained its lead during the third quarter despite “a decline in overall iPad shipment volume in 3Q14.” Specifically, Apple grabbed 22.8% of the market with 12.3 million shipments during the quarter compared to 14.1 million units and 29.2% share in the year ago quarter. That compares to Samsung at 18.3% of the market and 9.9 million units shipped up from 19.3% and 9.3 million units shipped in the third quarter last year:

Apple, during its earnings call, noted that the iPad’s lifecycle is extending. Combined with consumer anticipation and the release of the latest iPhones, IDC saw a decline in overall iPad shipment volume in 3Q14. Although Apple has recently updated and expanded its iPad lineup to its widest offering ever, IDC still expects 2014 to be the year of the iPhone… Samsung has slowly begun to focus on markets like North America and Middle East and Africa (MEA), where low-cost Asian vendors haven’t been able to gain a foothold just yet. Although Samsung’s share declined slightly compared to last year, it was able to experience 5.6% growth and was able to maintain its number 2 rank among the top 5.

While pointing out that tablet shipments have grown 11.5% year over year worldwide, IDC also reports that it “saw Verizon continuing to sell connected tablets at a fast pace, a strategy that we believe other carriers will replicate in following quarters.” If you’re wondering why RCA has entered the top 5 this time around, IDC attributes it to “one large deal linked to back-to-school and channel fill ahead of Black Friday.” The RCA shipments and Verizon sales, according to the report, account for a higher 18.5% growth for tablets in the US.

While Apple and Samsung remained in the number 1 and 2 spots, the companies are followed by ASUS (down one point to 6.5% market share), Lenovo (up slightly to 5.7% share), and RCA up 194% since last year to 4.9% of the market. The “Others” category, however, makes up 41.8% of the market in IDC’s research with 22.5 million units shipped.

It’s not clear how many cheapo, white box tablets make up the others category, but IDC notes that the data in its report includes “both slate tablets and 2-in-1 devices.” You can imagine Apple’s share of tablets people actually use is much higher than 23% it grabbed in IDC’s report. IDC says “Vendor shipments are branded shipments and exclude OEM sales for all vendors.”

Worth noting is that leading into Q4 Apple has two new iPad models, the iPad Air 2 and iPad mini 3, that will likely give the company a big boost in sales for the important holiday quarter. Both tablets officially went on sale last week in the US and several countries abroad.